It’s much easier to identify a gaming laptop that matches your requirements these days. Nvidia’s GeForce 900 series of mobile GPUs now includes the GTX 950M at the lower end, followed by the GTX960M, GTX 965M, GTX 970M and GTX 980M. Which one you’ll need depends on your budget, how modern the games are that you want to install and what resolution you want to play them in.

As a rule of thumb, anything up to a GTX 965M will be more than suitable for 1080p gaming, albeit with varying levels of graphical detail and inconsistent frame rates in texture-heavy titles such as Fallout 4 and The Witcher 3. If you won’t accept anything less than 60 fps with every graphics options ticked, expect to splash out on a 970M or 980M-equipped laptop – especially if you’ve set your sights beyond full HD. 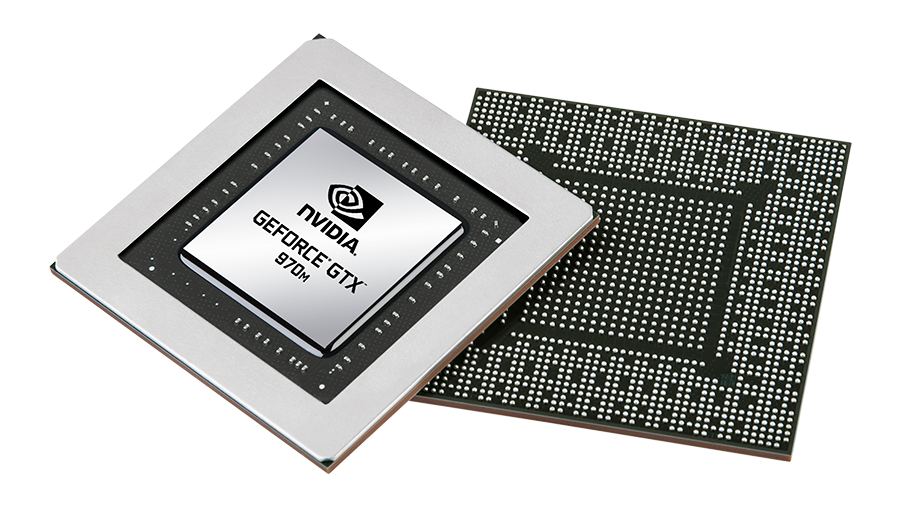 To help you find out which mobile GPU is for you, we’ve rounded up the best laptops to feature each chip. We’re basically the aspirin to your gaming laptop headache.

The GTX 980M is the current cream of the crop as far as Nvidia’s mobile graphics chips go. (We’ll take a look at Nvidia’s laptop-bound GTX 980 another time.) The 980M is around 75% as powerful as a desktop GTX 980, which gives you some idea of how meaty it is. The 980M uses a 256-bit memory interface, packs 2,048 CUDA cores and can boost its clock speed up to 1,216MHz. Most laptops with a 980M inside are paired with a large amount of video memory, allowing you to play titles built on massive textures sans slowdown. 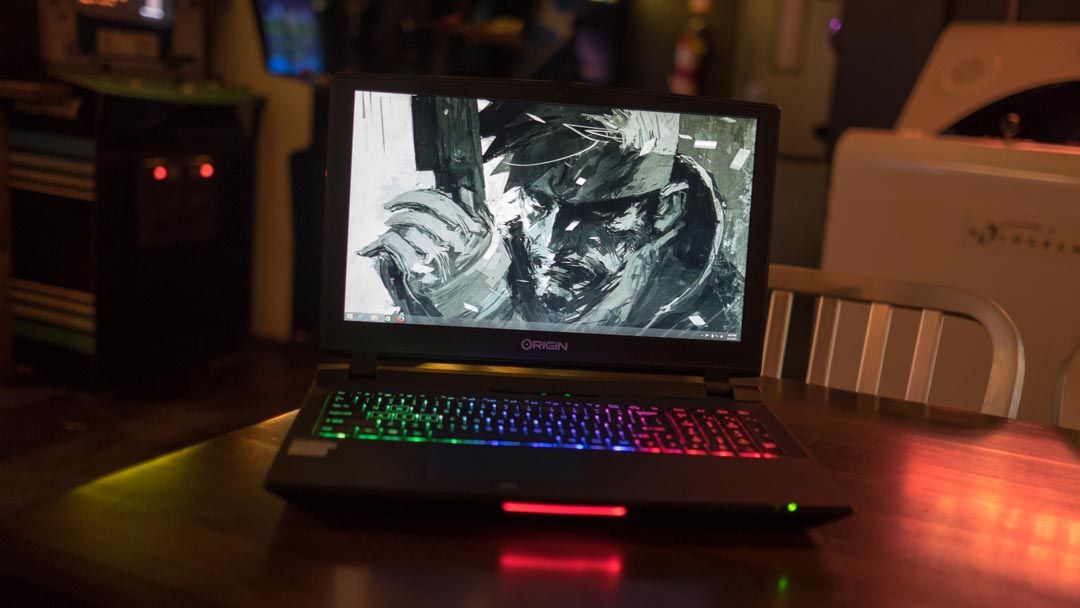 The Origin EON 15-X chews through anything you throw at it thanks to its GTX 980M, which is backed up by a huge 8GB of video memory. Having that much vRAM onboard means you won’t have to worry about the laptop coping with high-res texture-heavy titles like The Witcher 3, GTA V or Fallout 4. And yes: they all look stunning on the EON 15-X’s 15.6-inch 1080p matte display. 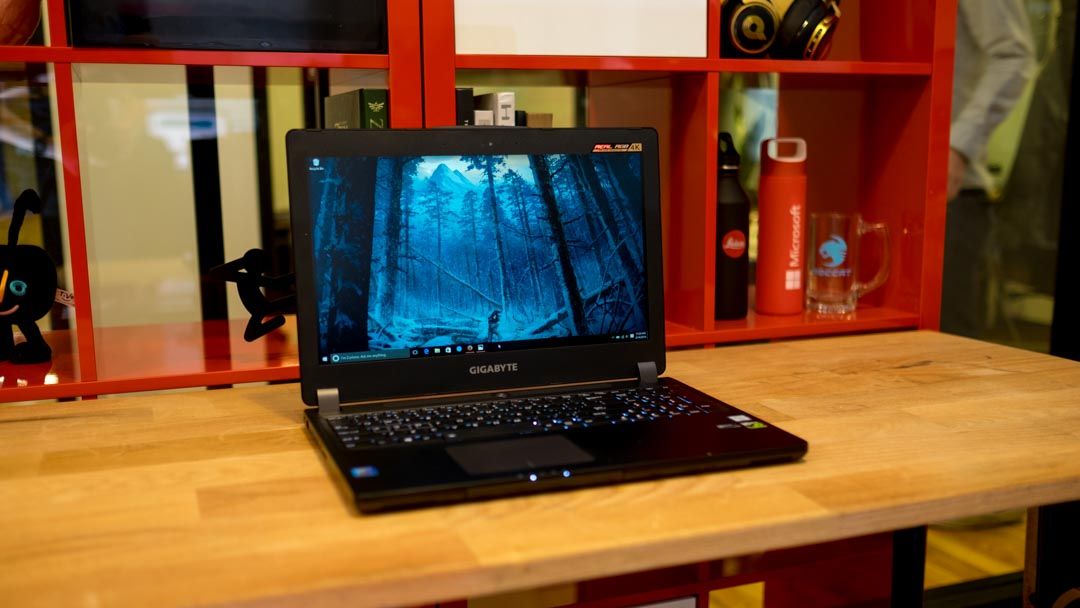 If you’re looking for a powerful gaming laptop that’s also compact, the P35X v5 should be on your radar. Its GTX 980 GPU packs a punch thanks to its 8GB of video memory, which you can put to good use on its impressive 4K display. (A 1080p panel is also offered as a choice.) The P35X v5’s solid benchmark scores beat those produced by more expensive 980M-equipped rival machines, so if you care more about what’s under the hood than the hood itself, it’s well worth a look-in. 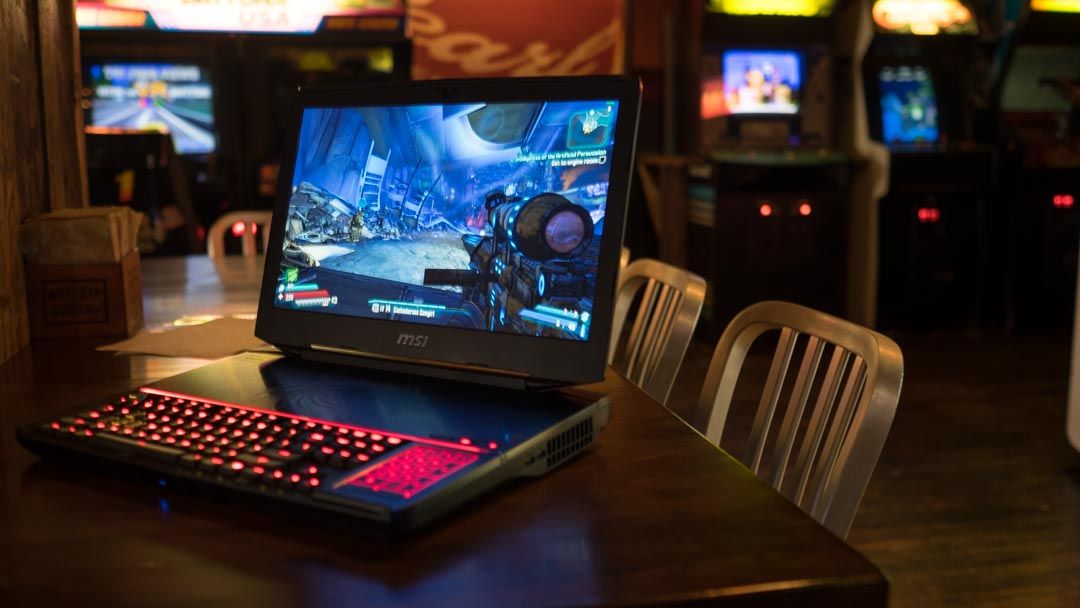 The MSI GT80 Titan lives up to its name. It houses not one, but two GTX 980M GPUs configured in SLI and more than delivers the horsepower required for intense gaming sessions. It’s quite easily the heaviest GTX 980M-powered computer on the block, but you get a full-sized mechanical keyboard with Cherry MX switches under the keycaps to make up for that sprained back you’ll get after lugging it around. 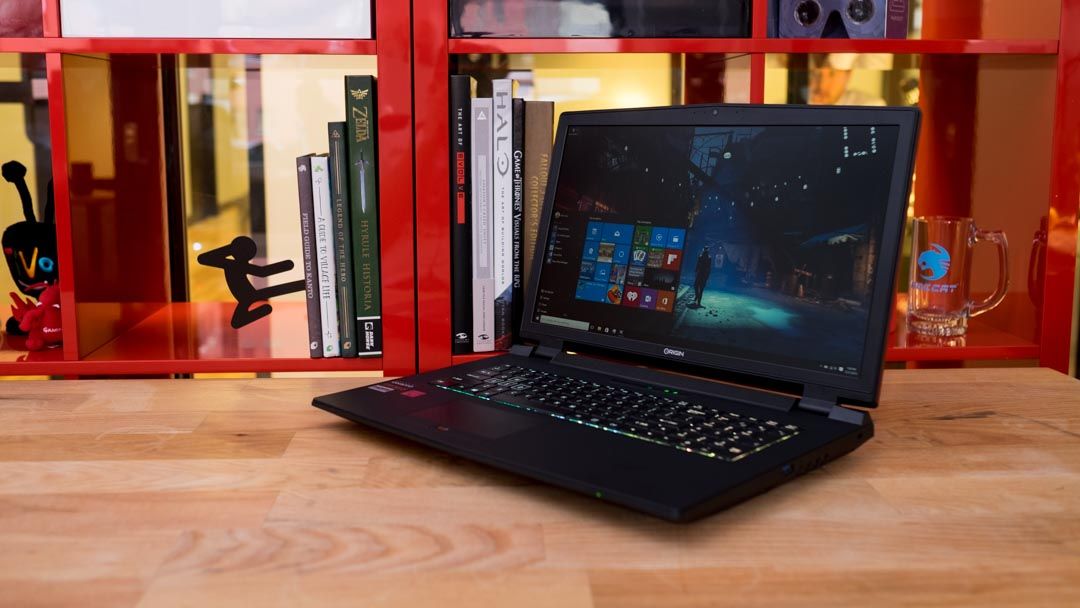 Like the MSI GT80 Titan, the Origin EON17-X is a true desktop replacement with a desktop processor inside. On the outside it’s basically a larger EON15-X, featuring a 17.3-inch display (with G-Sync support) and a top-end sixth-generation Intel Skylake processor. Its 980M lends it some of the best performance stats we’ve seen from a laptop thanks to its massive 8GB video memory buffer, and if you’re not keen on wearing a gaming headset, the EON17-X’s speakers impress too. 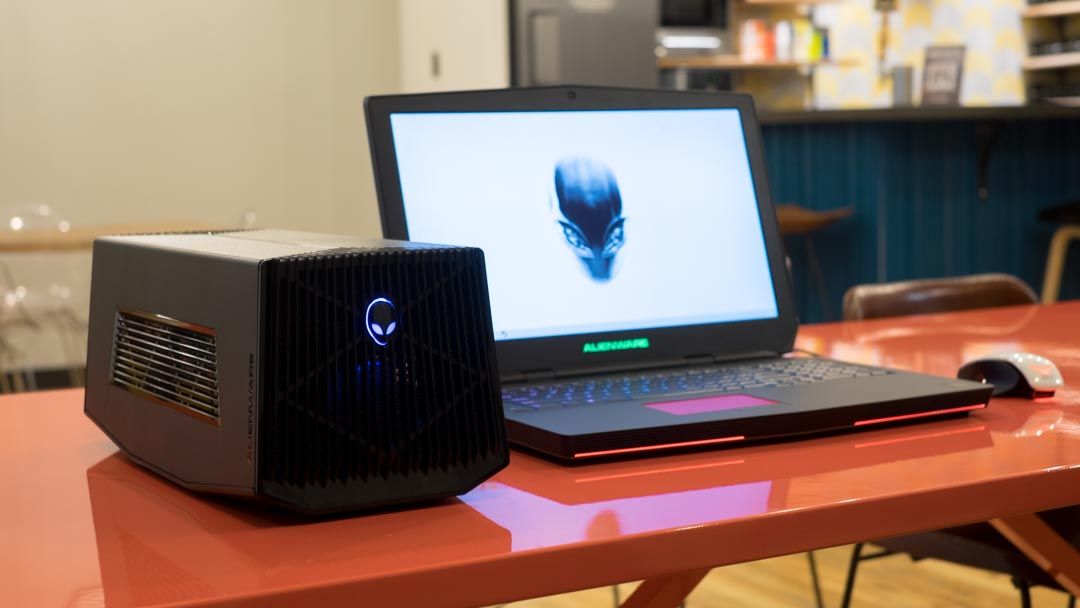 Angular, powerful and delivering attitude in spades, the Alienware 17 has everything fans of Dell’s gaming systems want. Packing a large 17-inch display, its GTX 980M chip inside is backed up by an acceptable 4GB of video memory and 16GB of DDR3L RAM. If you’re seeking even more power, Alienware’s Amplifier lets you connect the laptop to an external GPU enclosure to draw power from a desktop-grade graphics card.

A laptop that looks like it was built by gamers for gamers, the 980M-powered Acer Predator 15 has a chassis that would light up any LAN party. You probably won’t want to bung its massive angular frame into a backpack, but if you do, it’s one heck of a portable powerhouse. An Intel Core i7-6700HQ and 4GB of GDDR5 RAM paired with a whopping 32GB of DDR4 of main memory means you’ll have no trouble running the latest games.

Like its desktop equivalent, the GTX 970, the 970M does a better job of balancing performance and cost than the flagship 980M above it. Most models still offer plenty of video memory, but the 970M is less capable of hitting the high notes once you venture beyond full HD. Still, it’s the ultimate semi-affordable solution for 1080p/ultra gaming on the go. The 970M packs 1,280 CUDA cores, uses a 192-bit memory interface and features a base clock of 924MHz (plus boost). 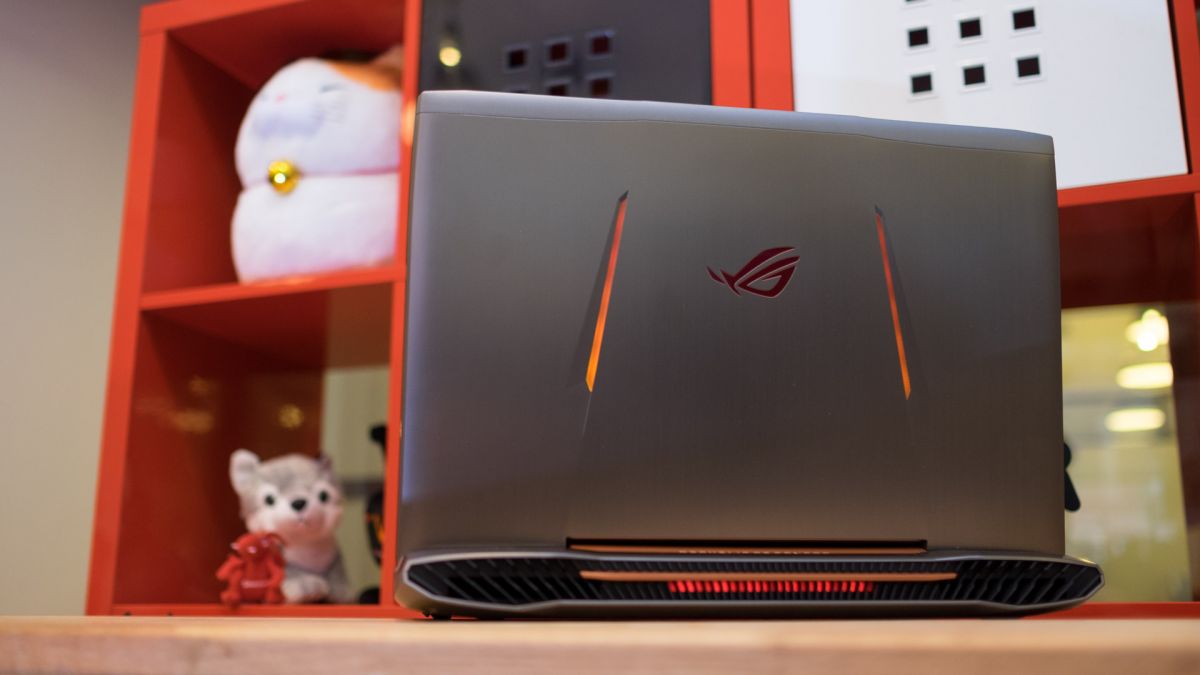 A silver-styled laptop with the strength of a silverback gorilla, the ROG G752 packs power and style. While not the lightest of laptops, the GTX 970M inside ensures eye-popping visuals and smooth frame rates courtesy of its G-Sync screen. The G752’s display tops out at 1080p, which helps it score points in the value department at the expense of crisper visuals on the desktop and in games. 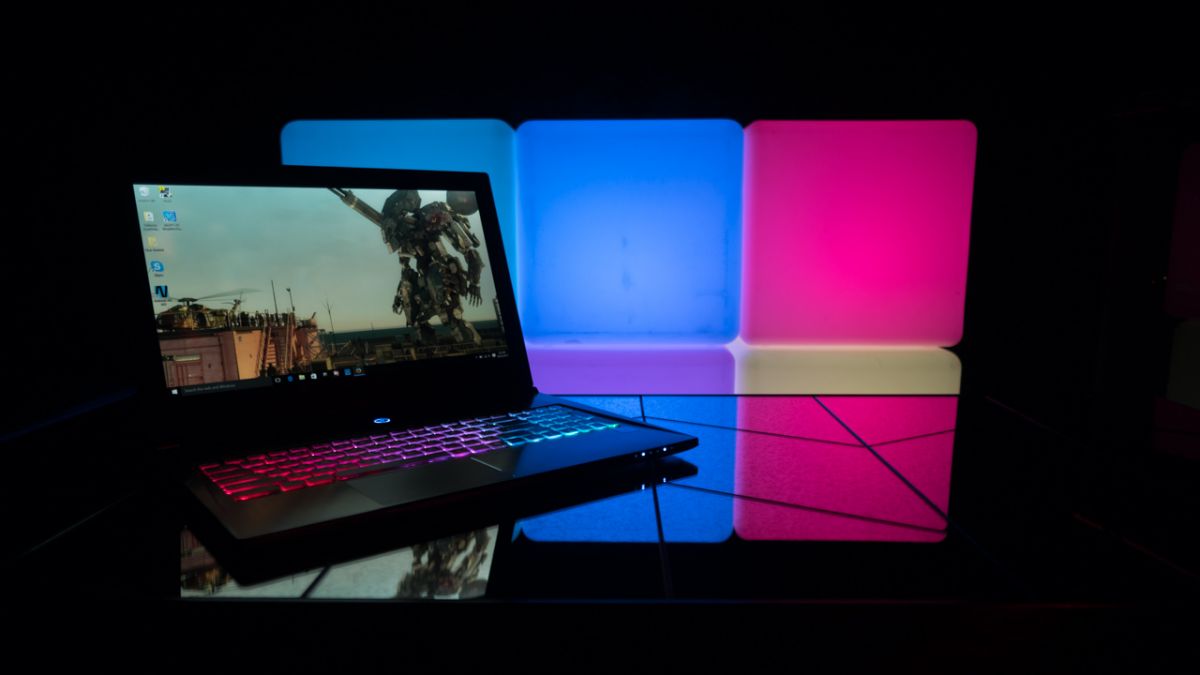 The MSI GS60 Ghost Pro is a stylish machine with a 1080p display. It pairs a 970M with an Intel Core i7 6700HQ Skylake processor making it one of the most capable full HD laptops we’ve ever tested. It’s something of a multimedia all-rounder too thanks to its excellent screen and formidable speakers – plus it has one of the most comfortable keyboards doing the rounds on a gaming laptop. 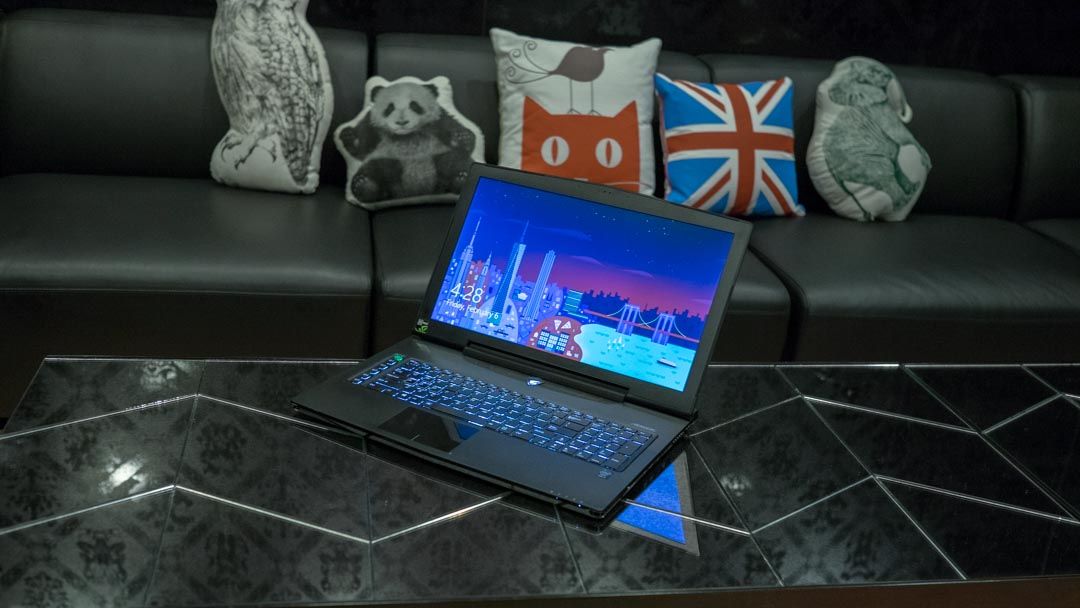 This monster from Aorus features Nvidia’s frame-smoothing G-Sync tech, which eliminates screen tearing to make gameplay super-smooth. On the inside there’s a 2.5GHz Intel Core i7-4870HQ processor and – wait for it – dual GTX 970M GPUs with 6GB of GDDR5 video memory configured in SLI. Fashioned out of a futuristic lightweight alloy, the X7 Pro-Sync is a tempting blend of power and semi-portability. 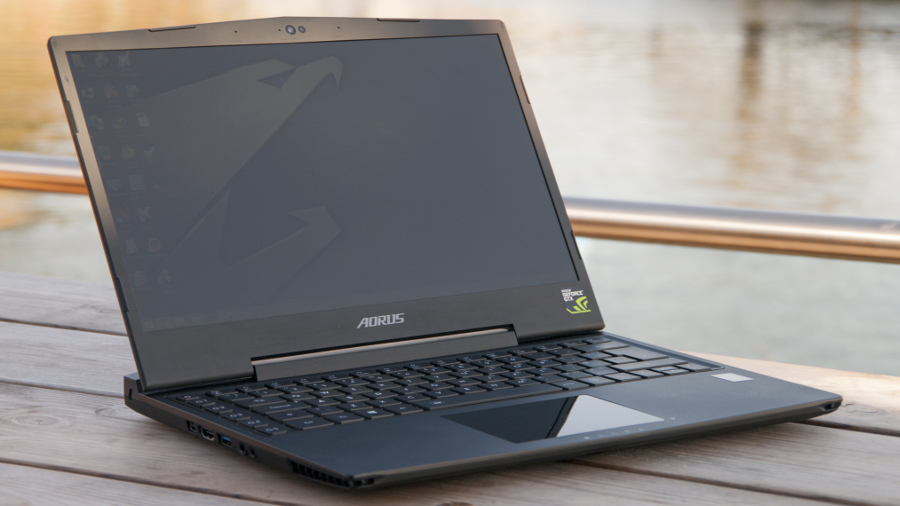 The slimmest of the lot, the Aorus X3 Plus V3 is a slimline computer that features a GTX 970M chip under the hood, one that’s backed up by a whopping 6GB of GDDR5 memory. With that amount, 4K gaming is possible on some titles. Tune down the resolution down a notch or two and you can play any title out there. Just make sure you pack a gaming mouse because the Aorus X3 Plus V3’s glass trackpad is a confusing and at times unusable pain point. 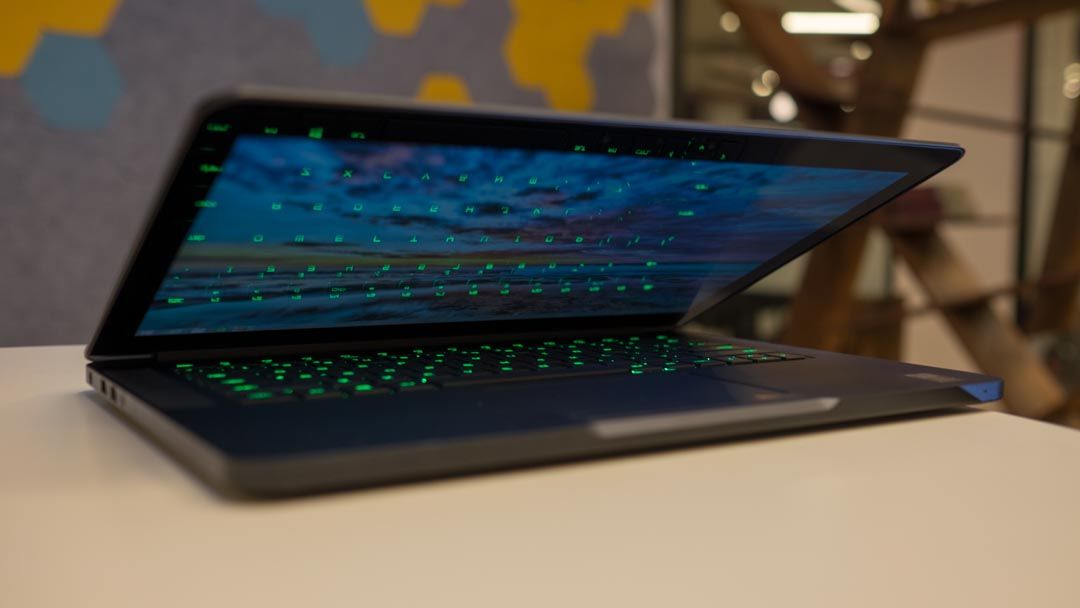 Styled like a MacBook Pro but packing the power of a portable battlestation, the 2015 Razer Blade is primed for 3K gaming – though you’ll want to lower the resolution down from its native 3,200 x 1,800 when playing recent titles if you want to hit 60 fps. Its GTX 970M is paired with 3GB of GDDR5 video memory, and Intel’s older Core i7-4720HQ features as the processor. It’s highly likely that Razer will update the Blade with Intel’s sixth-generation Skylake processors in 2016, but if you can’t wait that long then the company’s inventive Blade Stealth laptop and docking station combination might prove a tempting alternative.

The GTX 965M is the newest mobile graphics chip on the block from Nvidia. Lying one place below the 970M, laptops housing a 965M are often equally as affordable as the 960M while bagging you a handful more frames (or more, depending on the title), compared to the that chip. The 965M is configured with 1,024 CUDA cores and has a base clock of 944MHz (plus boost), with a 128-bit memory interface. 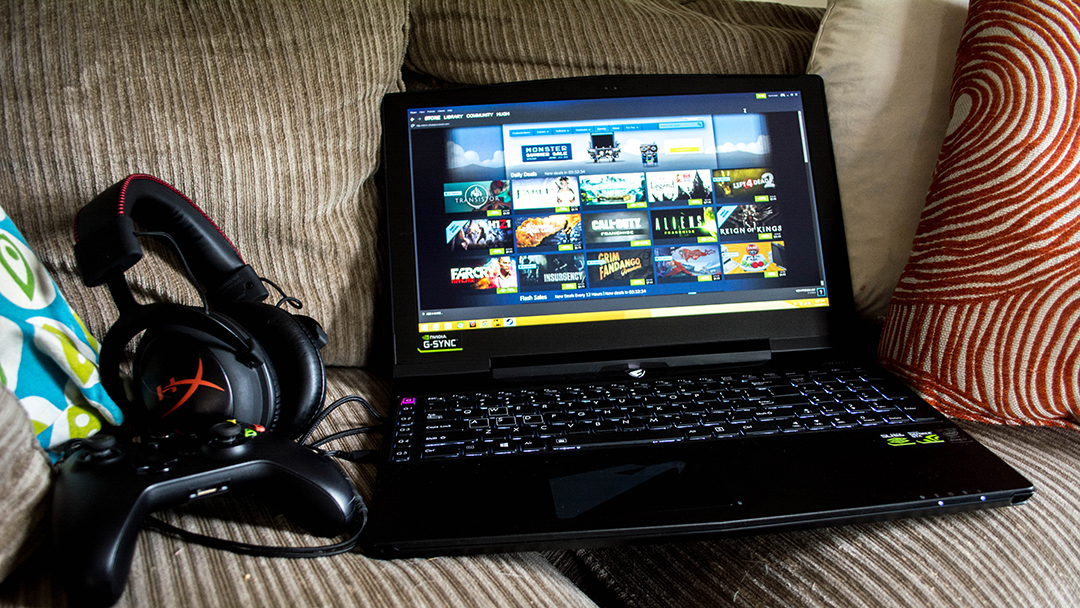 A thin-and-light 15-inch gaming laptop that’s compact enough to slip into a backpack, the Aorus X5 brings the power. The machine somehow manages to squeeze in a pair of GTX 965M GPUs under its aluminium chassis, which measures under an inch thick. Packing a total of 8GB GDDR5 vRAM, the X5 is equipped to tear through games with large textures – and you can even go beyond Full HD thanks to its gorgeous 2,880 x 1,620 pixel-resolution WQHD+ display. 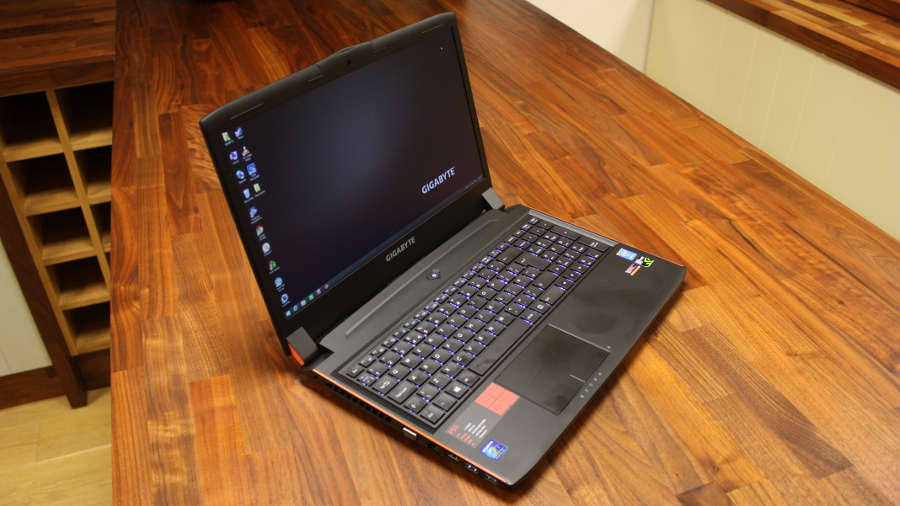 The Gigabyte P55K V4 isn’t the prettiest gaming laptop out there, but it packs a punch. Intel’s fifth-generation Core i7-5700HQ (quad-core, 2.7GHz up to 3.5GHz with Turbo Boost) Broadwell processor is paired with a GTX 965M (2GB GDDR5) and 8GB of main memory, which all helps games look terrific on the P55K V4’s accurate IPS display. 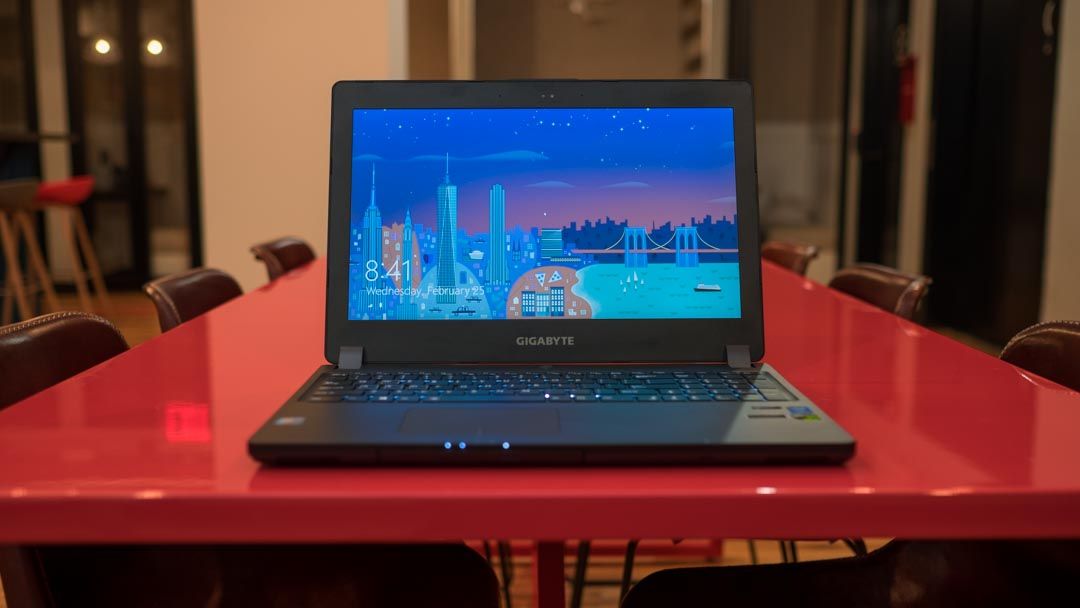 The second Gigabyte entry our list of GTX 965M-powered laptops dials down performance in one or two areas to make it more attractive for budget buyers. The P35K v3 packs a slightly older (but still very capable) Intel Core i7-4270HQ, and its GeForce GTX 965M’s 4GB of video memory is actually double that in the 2GB in the P55K V4.

Lying bang in the middle of the mainstream and performance sector, the Nvidia GTX 960M suffers a significant dip in performance in some games compared to the 970M due to its considerably fewer CUDA cores (640 versus the 970M’s 1,280). With a 128-bit memory interface and a base clock of 1,096MHz (plus boost), the 960M is a still a great option for 1080p gaming and models sporting the chip are often (but not always – see the HP Omen) a good deal more affordable than their 970M-equipped competitors.

It isn’t a gaming laptop, but Dell’s XPS 15 makes for a mean 1080p gaming machine thanks to its beefy Skylake processor, 960M and incredible 4K InfinityEdge display. The XPS 15 doesn’t weigh a ton and is the most compact 15-inch laptop on the block due its display’s thin bezels, making it a great choice if you’re frequently carting your gaming machine around in a backpack. 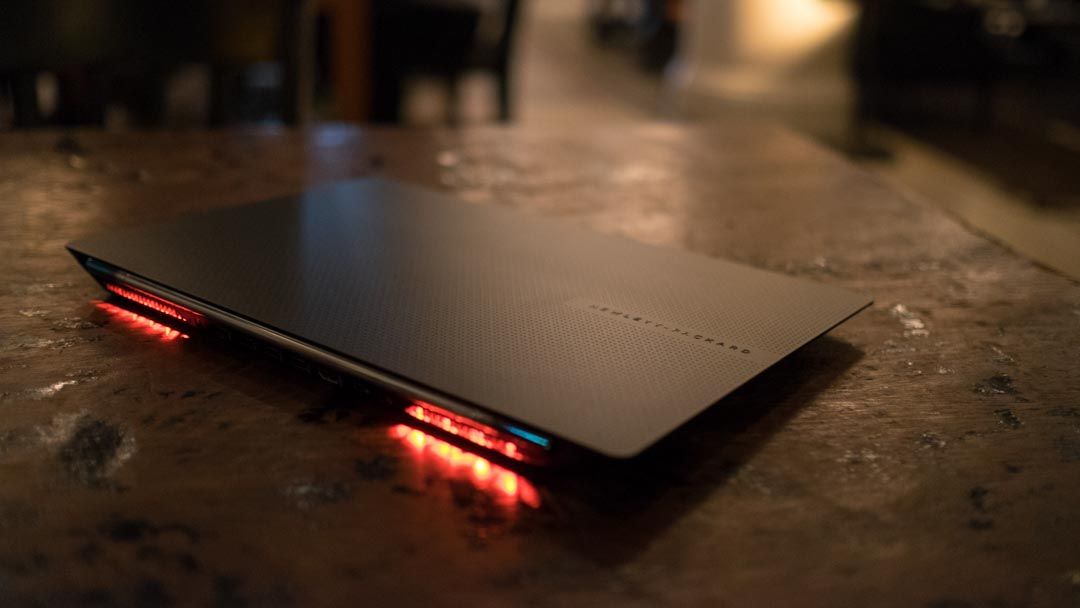 Many gaming laptops with a 960M inside don’t feel the need to be stylish, but not the HP Omen. Steeply tapered edges and lights embedded around the chassis make for one of the most eye-catching models out there, and with 4GB of GDDR4 RAM and 16GB of main memory, there’s enough grunt under the hood to take on today’s most demanding games. It’s pricier than other 960M-equipped laptops out there, but style-conscious gamers might think it’s worth it. 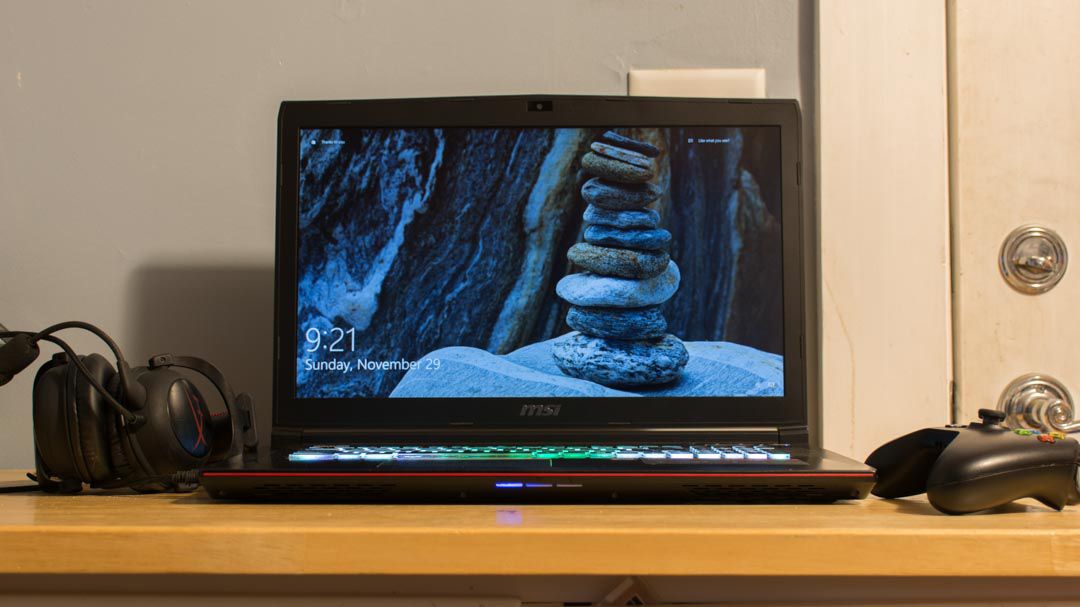 The MSI GE72 Apache Pro is an aggressively-styled machine with performance to match. It features plenty of storage for games and is a strong performer thanks to a sixth-generation Intel I7-6700HQ Skylake CPU under the hood paired with a GTX 960M (2GB vRAM) and up to 16GB of DRR4 RAM. 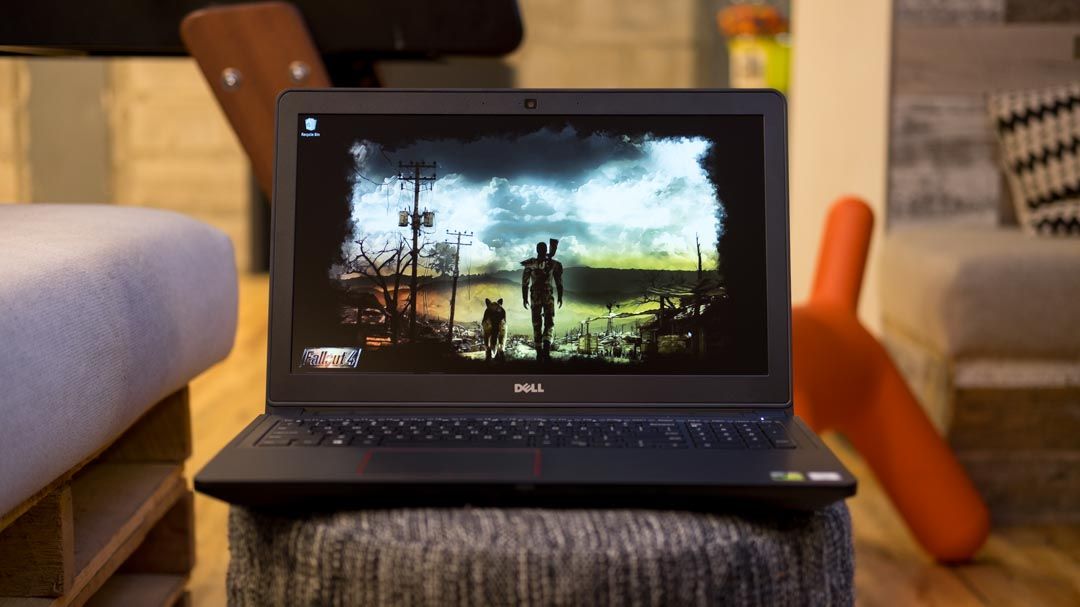 Affordable yet powerful, the Inspiron 15 7000 deploys Nvidia’s GTX 960M to great effect. The mobile GPU’s healthy 4GB of GDDR5 video memory means the Inspiron can chew through games packing large textures. If you can cope with its bulky chassis and slow hard drive, the Inspiron 15 7000’s great display, speakers and battery life all add to its gaming credentials.

Nvidia’s GTX 950M is the lowest we would recommend you go if you’re on the hunt for a gaming notebook. You’re looking 1080p gaming squarely in the eye with this mobile chip, but be prepared to tune down some graphics settings (and the resolution) on more recent titles to hit 60 fps. The GTX 950M packs 640 CUDA cores and a base clock speed of 914 (plus boost), with a 128-bit memory interface. 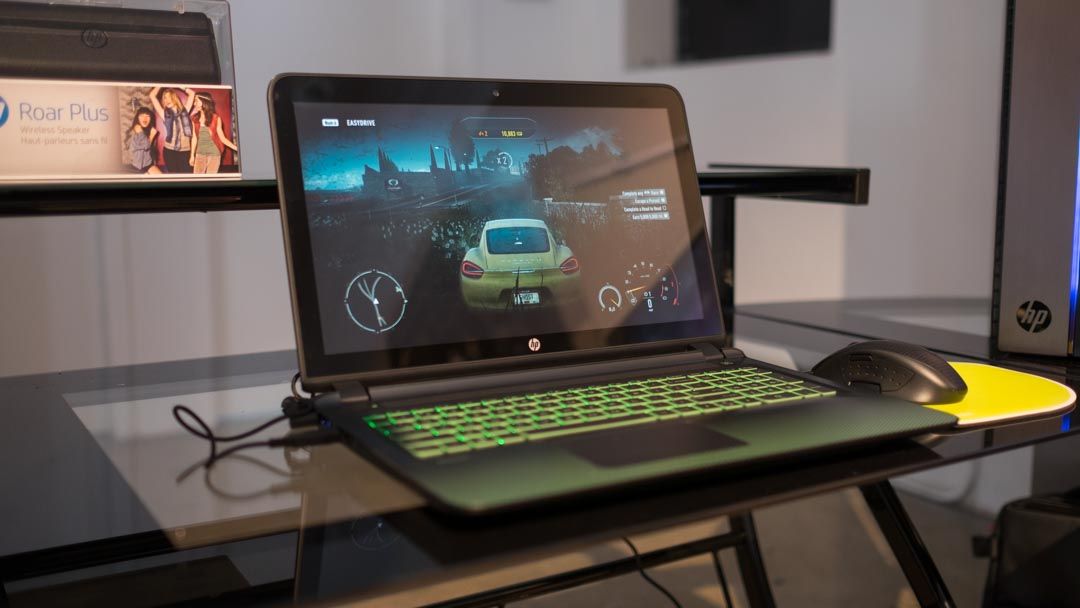 One of the best value gaming laptops out there, the HP Pavilion Gaming Notebook is a mean green gaming machine. It features Intel’s new Skylake i7-6700HQ processor which also resides in Acer’s Predator 15, though the 950M makes for a comparatively modest gaming machine. 60Hz gaming isn’t out of the question, but you’re more likely to achieve it playing titles from one or two years back and with the graphics turned down a notch or two.

Don't miss a deal at O2 Mobile
Best offers at Udemy
Discounts, Sales and Deals at TalkTalk Phone and Broadband
Save your money with Surfdome
Online-Shopping with Nike DE
Best products at Groupon
Latest Posts