On the surface, the Ring Video Doorbell 3 Plus seems to offer few improvements over its predecessor. However, under-the-hood tweaks means it’s faster to launch a livestream from your smartphone, there are fewer false positives when it comes to motion detection, and its pre-roll feature lets you view the four seconds of footage before motion is detected, making it easier to identify what caused an alert. It retains the clear, sharp audio and video too.

The Ring Video Doorbell 3 Plus is the latest version of Ring’s smart doorbell that lets you see and speak to anyone on your doorstep. If you’re looking to put an end to missed deliveries, or want to avoid cold-callers, this could be the smart doorbell for you.

As well as alerting you via the smartphone app when the doorbell has been pressed, it will also notify you of any motion detected on your driveway. The doorbell’s camera has a 160-degree field of view which results in a slight fisheye effect, both when viewing a livestream from the doorbell or playing back recorded footage, although this doesn’t detract from the clear and detailed Full HD color video the doorbell captures. Night vision means video recorded after dark is also clear and easy to see, although it’s in black and white rather than color.

Like the Ring Video Doorbell 2 (launched in 2017), the Doorbell 3 Plus can be wired in place of an existing doorbell or used as a battery-operated doorbell. The battery is removable, which means you don’t have to take the entire doorbell off the wall to recharge it. If you’ve chosen a wired installation, the doorbell will trigger an existing chime in your home, if you have one. If you’re using the Ring Video Doorbell 3 Plus on batterypower, you’ll need to purchase the Ring Chime ($29.99 / £29.99 / AU$59) or Ring Chime Pro ($49.99 / £49.99 / AU$79) if you want to hear a sound inside your home when the doorbell is pressed. It’s not the smallest of doorbells, at more than three times the size of many traditional wired doorbells, and it won’t fit on most door frames.

It builds on the Ring Video Doorbell 2 with support for both 2.4GHz and 5GHz Wi-Fi, which should bring an end to the connection issues that have plagued some users, in particular those with slower broadband. It’s also the only Ring video doorbell that comes with a ‘pre-roll’ feature. This stores the four seconds of black-and-white video that were captured before motion detection was activated to help you identify exactly what triggered the alert. There’s no audio on these clips, and the feature only works in good lighting conditions, so while footage after dark is saved, we found it was extremely hard to see.

As Ring is an Amazon-owned company, the doorbell is fully integrated with Alexa. If you have an Amazon Echo in the house, you can set it to announce when the doorbell is pressed or motion is detected. You can converse with anyone on the doorstep through Echo smart speakers too, and view the doorbell’s live feed on Echo Show devices – you can even set up your Echo Show to automatically display the doorbell’s video feed as soon as it’s pressed. 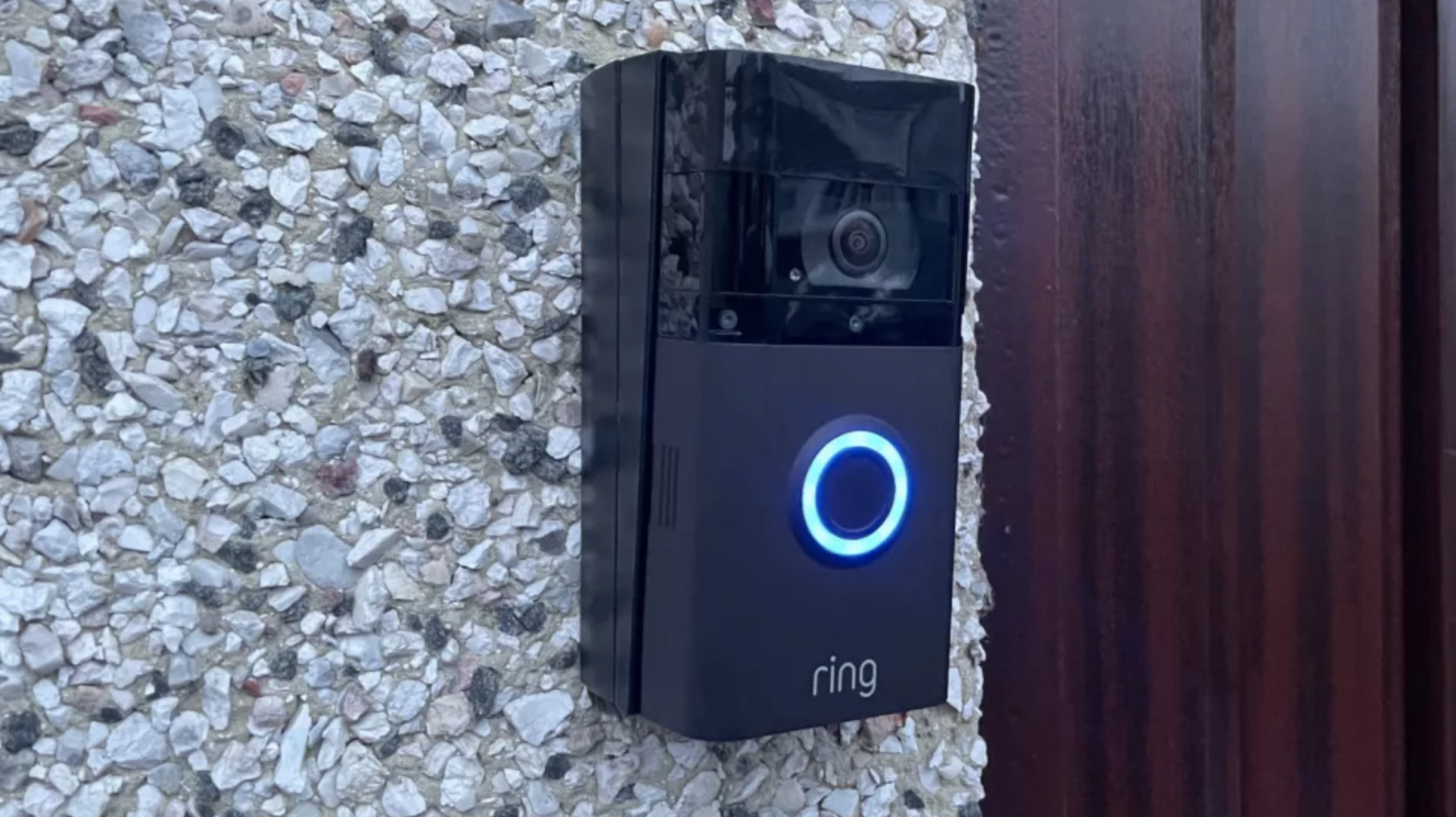 Even though it’s bigger than your average doorbell, measuring 5.1 x 2.4 x 1.1 in (128 x 62 x 28mm), the stylish design of the Ring Video Doorbell 3 Plus means it doesn’t look obtrusive. It comes with two interchangeable face-plates in silver and dark grey, although other colors – including gold if you like a bit of bling on your front door –, are available to buy for $14.99 / £13.99 / AUS$25 from the Ring website.

The doorbell is relatively simple to install. You’ll need to download the free Ring app, which is available for iOS and Android, and create an account, then follow the instructions in the app, which guides you through every step of the install process. Ring has even included the correct size drill bit and a miniature spirit level in the pack, so you have everything you need to get started.

The doorbell has a security screw in the bottom that secures the faceplate to the body of the doorbell, and can only be removed by a unique type of screwdriver (included in the box). This reduces the likelihood of anyone removing the battery rendering the doorbell useless, and Ring also promises that if the doorbell is stolen, as long as you can provide a crime reference number, it will replace the doorbell free of charge.

In a first for Ring, the doorbell works on both the 2.4GHz and 5GHz Wi-Fi bands, which should ensure it takes less time from tapping the notification to being able to see who’s on your doorstep. 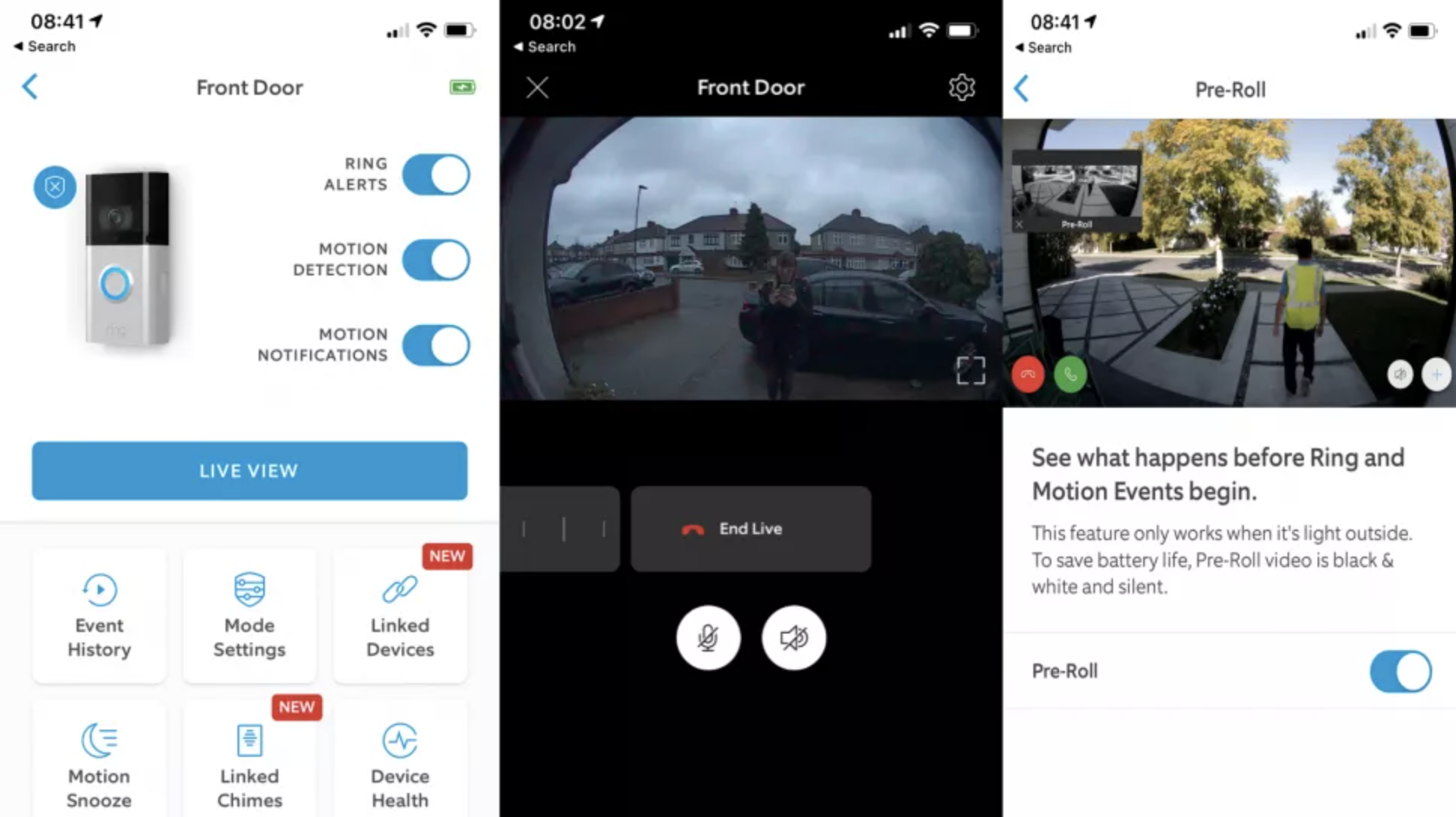 The Ring Video Doorbell 3 Plus is simple to use. You’ll get a notification on your smartphone when the doorbell is pressed, and a tone from your home’s existing Chime if the doorbell is wired. If you’re using batterypower and have the optional Ring Chime, that will play a tone. If you tap the notification, you’ll be able to activate ‘live view’. In this mode, you can see and converse with anyone on your doorstep. We found it took just a couple of seconds between tapping the notification and ‘live view’ being activated. The video and audio from the live stream was clear and we found conversing with anyone on the doorstep was natural and with very little distortion, although we were unable to see the full length of the person on our doorstep. The doorbell records video once the doorbell has been pressed too, so if you’re unable to answer at the time, you can go back and view the video at a later time, providing you’ve subscribed to Ring Protect.

It also doubles as a Wi-Fi security camera, recording video clips when motion is detected. You can choose to be alerted about these as well, again tapping the notification to log in live, or reviewing the footage at a later time if you subscribe to Ring Protect.

The Doorbell 3 Plus works with Amazon smart speakers too. You can opt to have an Echo speaker in your home to announce that someone is at the door (when the doorbell has been pressed) or that motion has been detected, and if you have an Echo Show you can see a live feed from the doorbell on its screen rather than picking up your smartphone.

The Ring app is intuitive and uncluttered. When you open the app you’re presented with a dashboard showing all your Ring devices, with a snapshot of the most recent motion detected by each. Tap the image to bring up a timeline which you can scroll backwards through reviewing any motion or doorbell presses; you can activate live view from here too. If you subscribe to Ring Protect, you’ll also get a feature called ‘snapshot capture’ that takes still images throughout the day at set intervals and stitches them together so you can see what’s happened between motion detection and doorbell presses.

If you prefer not to scroll through the timeline looking for events, you can choose the History option from the main menu, which breaks down the events into doorbell presses, motion detection and live view.

In the settings menu you can adjust the area that is monitored for motion, meaning those with shorter drives won’t be plagued by false positives created by vehicles or people walking past on the street. There’s also the option to create privacy zones, where motion isn’t detected, which is best-suited to when some of your neighbour’s property falls within the doorbell’s field of view. There’s also a People Only mode that can be enabled from this section, again to reduce the number of false positives created by vehicles, animals or trees moving in the breeze.

There’s also a stripped-down version of the Ring app called Rapid Ring, which can be downloaded from the app store. This can’t be used to set-up the video doorbell, but it can be used alongside the original app to reduce lag when it comes to launching liveview.

Ring claims the battery will last anywhere from six months to a year. We weren’t able to fully test these claims, and we used the doorbell heavily during testing so we don’t have a realistic reading of battery depletion. How quickly the battery drains will depend upon how many times the doorbell is pushed, how many times motion is detected and how often live view is activated. We found the battery took around eight hours to recharge using the bundled USB cable.

Don't miss a deal at Ticketmaster UK
Best offers at TalkTalk Phone and Broadband
Discounts, Sales and Deals at EE Mobile
Save your money with Ancestry
Online-Shopping with EBay DE
Best products at Sephora
Latest Posts