This sensational Sony is a welcome update on a sumptuous 1080p projector design. If you’re planning a dedicated cinema room, it’s a blockbuster you won’t want to miss…

Sony may have taken an early lead in the UHD projector race, with its trio of 4K flagbearers (the VPL-VW320ES, VPL-VW500ES and VPL-VW520ES), but the company continues to refine its dedicated Full HD offerings too.

Sony’s latest bright box has been given a brightness and contrast upgrade, as well as a lamp update. Lamp life is now quoted at 6000 hours in Eco mode, which is significantly better than many rivals, who tend to quote 3000 – 4000 hours usage.

If you’re looking for a serious home cinema projector priced at less than a top-end TV, it could well fit the bill.

One thing that hasn’t changed with the VPL-HW45ES is the wardrobe. This projector uses the same chassis as previous models in the line. Which is to say, it’s smart but undeniably chunky.

It’s a projector that demands proper installation – be it on the ceiling or nestled into a wall unit. This certainly isn’t a white wall job.

Setup is a manual, using zoom and focus rings on the top of the unit. There’s 1.6x of zoom, and generous lens shifting available – 25% horizontal adjustment and 71% vertical. 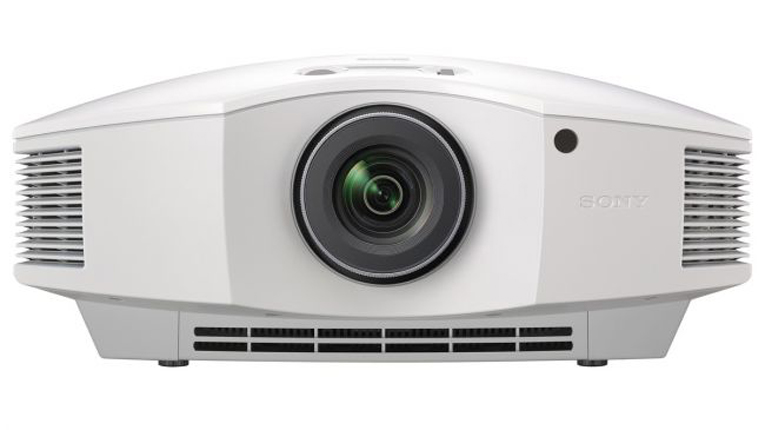 Our sample was a gloss white, but there’s a black edition if that’s a better fit for your theatre. It weighs 9kg (around 20lbs), so you may need to some help when bolting it to the ceiling.

Connections run down its right-hand side. There are two HDMI inputs, plus a USB port for firmware update support. There’s an IR input and PC control, but no 12v trigger, which continues to be a key missing ingredient on this Sony chassis.

The projector supports Active shutter 3D, and has an integrated RF emitter able to cover around 10m, enough for most rooms. 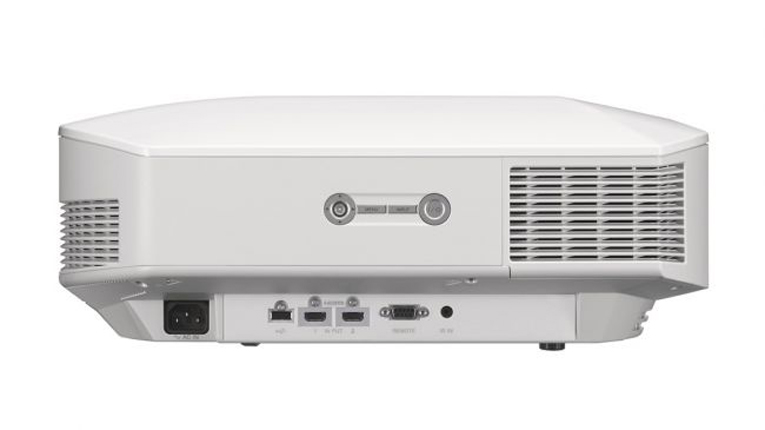 To keep things running cool, air is sucked in from the front left and rear, and expelled out right front. To ensure the lamp runs quietly, opt for one of the Cinema Film settings. In a home cinema environment, where you’ll most likely be using a loud multichannel sound system, so this won’t be intrusive.

The projector is rated at 1800 lumens, which is a slight improvement over its predecessor. In a dark room, this lift is evident and welcome, however if you hope to combat ambient light you may be disappointed. I don’t think even its Bright Cinema/Bright TV settings are really good enough to rival cheaper ultra-bright compacts. The VPL-HW45ES isn’t a light canon.

Of course, where the VPL-HW45 really does shine is in its video performance. This is a sublime projector which makes HD sources look sensational.

There’s a versatile collection of presets available, including an effective Game mode for input lag reduction. Choose from Cinema Film 1 and 2, Reference, TV, Photo, Game, Bright Cinema, Bright TV and User (this is actually the same as Reference, until you start to tweak it). 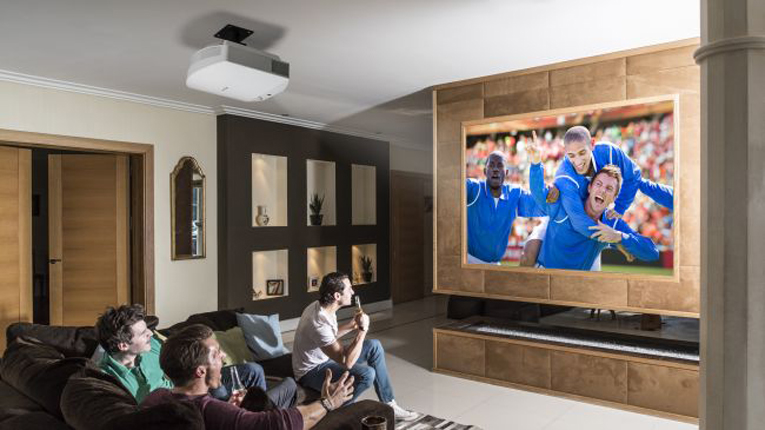 I’ve always been a fan of Sony’s Reality Creation image processing, which manages to pull extra detail from HD content without making it look heavily processed. Similarly, a Contrast Enhancer also pulls out extra depth in the image.

There’s a good deal of individual adjustment on offer too, including gamma correction and colour space adjustment, although for most content BT.709 will be the preferred default.

Motionflow technology is available to handle, well, motion resolution. Some care should be taken when tinkering here, as the settings do have a noticeable impact on picture quality. The True Cinema mode is a benign choice for movies. It doesn’t affect the original frame rate, but keeps horizontal panning judder under control.

If you’re watching live sports, then the Smooth Low Motionflow setting is the best option. This retains detail, but doesn’t impose too many moving artefacts. Smooth High is just too heavy handed in comparison, as it adds ugly motion artefacts around certain moving objects. Combination and Impulse modes are cleaner but suffer from pronounced flicker, and are best avoided. 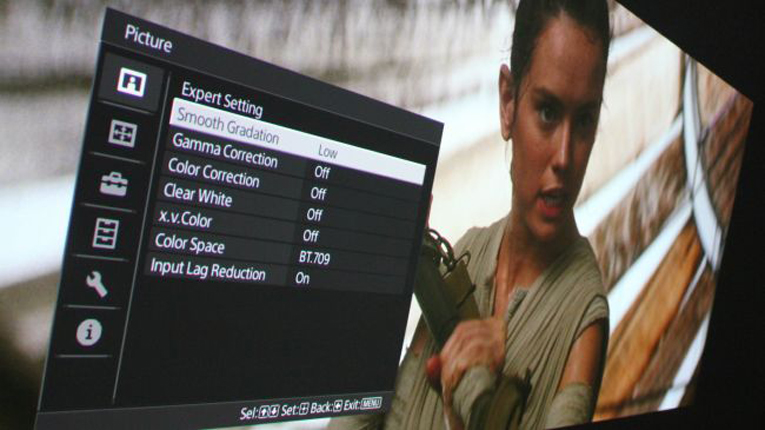 There’s genuine sparkle to the image. Star Wars The Force Awakens is one of the better encoded Blu-rays out this year, and looks supreme here. The deep space sequences enjoy a convincing black level, while the brightly lit chase across the surface of desert planet Jakku, is crisp and vivid.

Shadow detail is consistently good. In Batman V Superman (Blu-ray), for example, there’s plenty of depth to be found in the darkness. When Martha’s pearls clatter down the drain (spoiler), you can see clearly make out texture within the grate. 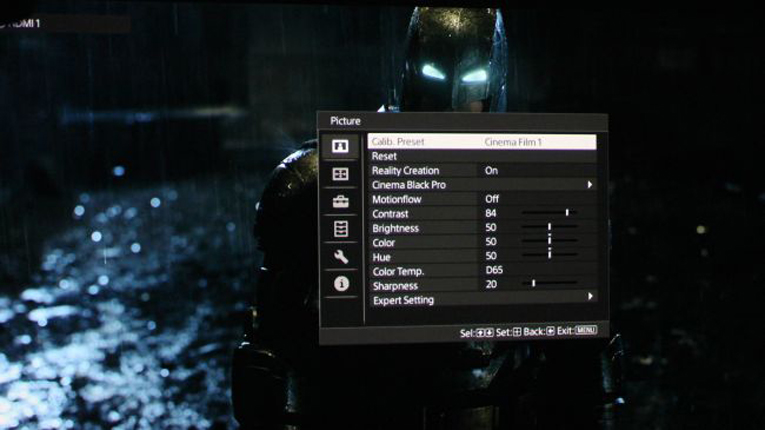 The opening slobber knocker between Supes and Zod is a riot of colourful destruction. As building fall and heatvision rays slice uncontrollably, there’s an intensity to the colour palette which is wonderfully involving – and you’ll certainly want to join in with the deep blue Indian Ocean dive to retrieve Kryptonite.

If you’re looking for a dedicated 1080p home cinema projector able to add value to most all types of HD content, the Sony VPL-HW45 comes highly recommended.

Offering a valuable bump in brightness over its predecessor, with excellent detail presentation, it’s a solid choice whether you’re a movie addict, TV binge-watcher or sports enthusiast.

Sony isn’t taking any design chances here. It seems that this chassis will be the last Full HD UHP lamp model Sony offers, which means it’s big and heavy. And while satisfyingly bright, you’ll not want to watch it in a room with more than a modicum of ambient light. You’ll need a proper cinema space to get the best results.

For serious home cinephiles, the VPL-HW45ES is a belting big-screen option. It’s crisp and flattering to a wide variety of HD sources. Once partnered with a big multichannel sound system, you may never feel the need to visit your local multiplex again.

0 0 0
Previous ArticleHTC Desire 10, not Nexus Pixel, likely launching next week
Next ArticleInstagram now gives you more control over what you see in your comments
Comments (0)

Don't miss a deal at Vimeo
Best offers at Ancestry
Discounts, Sales and Deals at Farfetch
Save your money with Carphone Warehouse
Online-Shopping with Argos
Best products at EE Mobile
Latest Posts