NAD’s $2,750 M10 media streamer is an integrated amplifier and media consolidator of wide scope and ability that produces pristine sound. It’s also easy to set up and use (mostly), and will look great nestled amid your other equipment or on its own.

It’s all goodness, except that for some reason, NAD didn’t leverage the unit’s large touch display for setup or selecting streaming sources. For that you need a computer or phone. It’s an odd omission in an otherwise comprehensive hi-fi component.

The M10 is a squarish black box measuring 8.5 x 10.25 x about 4 inches (WxDxH) and weighing about five pounds. The front is devoted entirely to a 7-inch color LCD touch display that’s used for transport control, displaying album art and song information, choosing inputs, basic operations, and minor tweaks. On top is the NAD logo, which is backlit to double as a status indicator.

I am Ben Patterson with Tech High.

The back of the unit is home to two pairs of binding posts for speakers, two RCA analog input pairs, preamp and subwoofer outputs, coaxial and optical S/PDIF inputs, an HDMI ARC input, as well as an ethernet jack and USB Type-A port. There’s also a mini-USB port for servicing, a 12-volt trigger port, and an IR port. There’s a three-prong AC connection, of course, as well as a service button to initiate firmware upgrades from USB media. 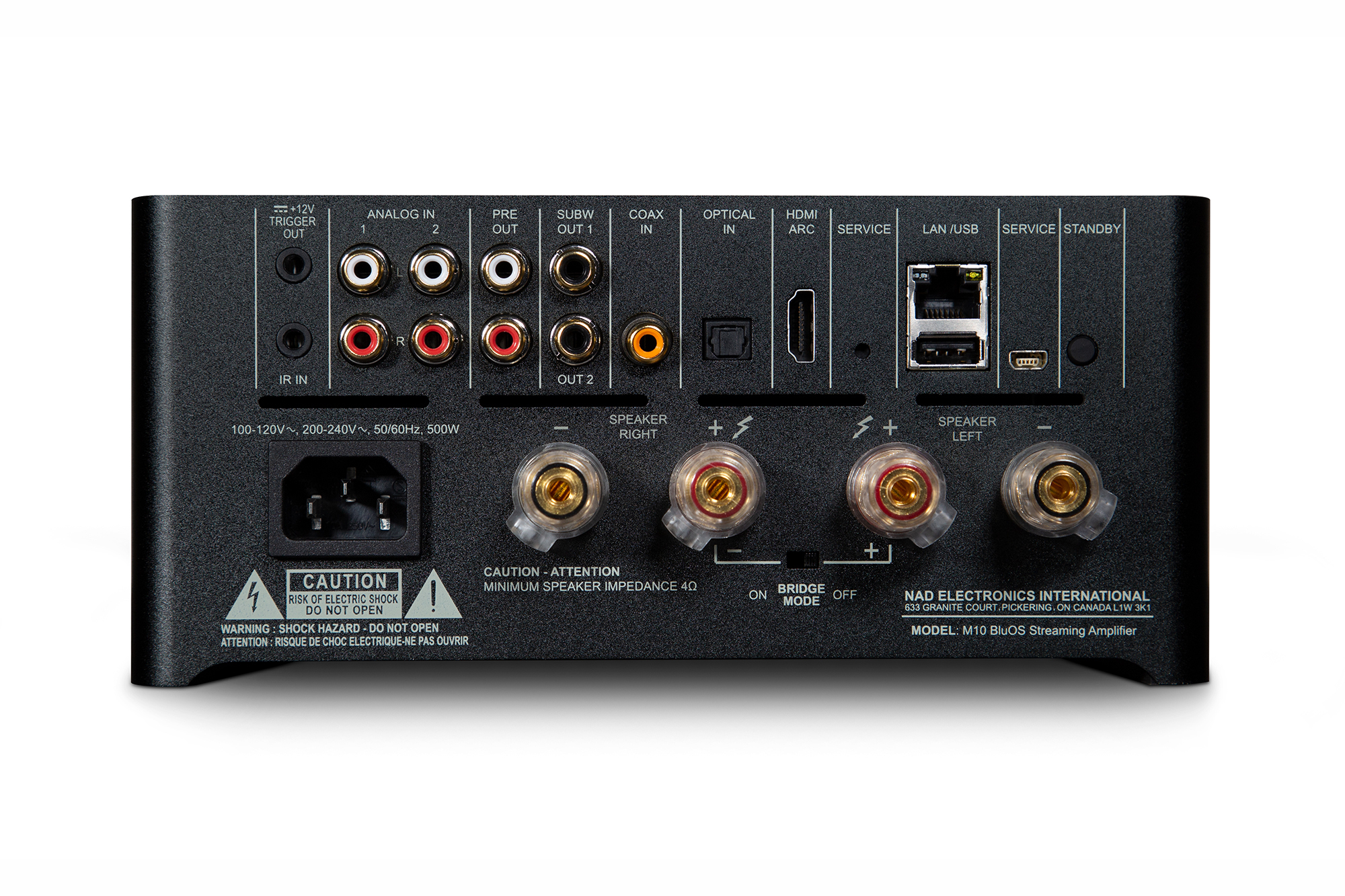 The amp is rated for 100 watts continuous into an 8-ohm load with less than 0.1 percent distortion. An onboard DAC handles MP3, AAC, WMA, OGG, WMA-Lossless, ALAC, OPUS, MQA, FLAC, WAV, AIFF, up to 32-bit/192 kHz PCM, as well as converted DSD playback via the BluOS desktop app.

You might have noticed MQA on the list. Some TechHive editors like it, but I’m still not sure what is up with this codec, or delivery system, if you prefer. It supports high-definition audio, but beyond that, the website and docs that I’ve seen talk a lot without saying much. That’s not an uncommon occurrence in boutique audio mind you.

On the other hand, the M10 also accommodates Dirac Live, which is one of the reasons you might want to pay the premium price.

Dirac is room and speaker acoustic analysis system that will optimize the EQ of your amp for its surroundings using what are known as impulse responses. These are created by emitting test tones (generally a frequency sweep) from your speakers, recording the reflections, and then mapping the time it took for them to reflect and/or which frequencies diminish or increase. NAD provides a license for the required Dirac Live app, which is available for the Mac, PC, and Android/iOS devices. The Live version is limited to frequencies of 500Hz and below, but you can upgrade to the 20,000Hz version for $99 on Dirac’s website. If you buy the M10 to play with tune-to-the-room stuff, the upgrade might be worth it.

NAD includes the necessary microphone and USB adapter which seemed to work just fine when plugged into the back of the M10. Once it’s connected, you run the Dirac app from whatever platform and follow the instructions. The process involves playing the aforementioned sweeping test tone and ends with the generated filter being uploaded to the M10.

Note that you’ll need to redo the process whenever you move your speakers or your primary listening spot, so to avoid repetition, decide on this stuff first. If you regularly dance about while listening, you might avoid the bother.

It’s one thing to leverage phone or PC connectivity to make a product easier and more convenient to use. In this case functioning as a remote control. It’s another thing to make the product dependent upon these devices for basic functionality. When you’re standing right next to a very expensive device with a large touchscreen, it’s just a tad annoying having to use your phone, tablet, or PC for basic setup and selection.

Where this offloading philosophy went from irritating to truly frustrating was when I brought the M10 home from the lab and hooked it up without connecting it to ethernet. Apparently the box didn’t like that the Wi-Fi network it had been previously connected to was missing, and dutifully commenced screen-blanking and rebooting every two minutes or so. If the device were capable of standing on its own two feet, I’m darn sure this programming mishap would not have happened. On the other hand, when ethernet is connected, the M10 is very easy to pair with the phone and BluOS app. As long as the phone and the box are on the same network, they should find each other. It’s auto-magical (with the aforementioned tunnel vision) on the box’s part.

The BluOS app (I used the Android version) is decent enough, though I think NAD and BluOS could come up with a more refined interface. It has the feel of being designed by engineers. I have a ton of music on a NAS box, and up to five NAS boxes in use on my local network at any given time. The phone app found only one, which sadly wasn’t the one with all the music. The web browser interface, run from my PC, found everything.

Note that the M10’s BluOS will only let you select the root folder of the network-shared folder, not subfolders, so organize things appropriately; i.e., put your music in the root of a shared folder named Music or some such. Generally that’s a good idea anyway when it comes to networks; some operating system limit the character count in file paths. 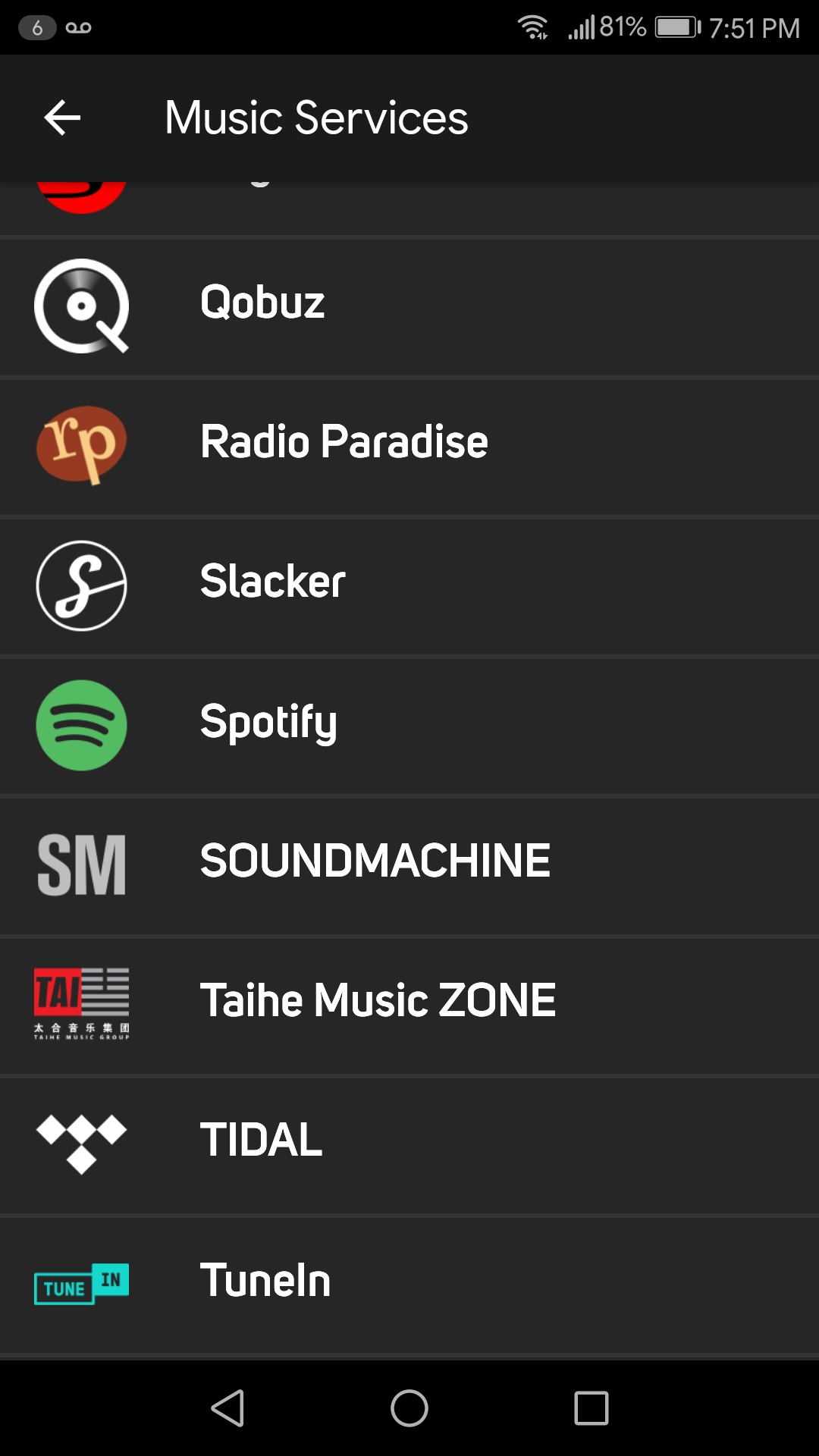 BluOS supports a veritable boatload of streaming services, as you can see in this screenshot of the phone app. But it would be nice if you could select them from the touchscreen on the M10 itself.

The app won’t play music on your phone. I realize that the phone is simply acting as a remote, but it would be a nice touch as many users still keep their favorite tunes on their phones. To play them, you’ll need to connect to the M10 via Bluetooth.

Back to the good stuff. The M10 sounds very good; musical and distortion-free to my ears through all my tests on three different sets of speakers, both 4-ohm and 8-ohm. Of course, amplification is so good across the board these days that it’s hard to call out one high-end product over another. At least if you have average hearing. Golden ears? I think they’d still like the M10.

Despite the 100-watt-per-side rating, the M10 didn’t really sound all that loud to me. At perhaps 75 percent, listening through speakers in my rather small test room was still more than bearable. It’s certainly loud enough for any average listening experience, if not a full-on rave (or whatever kind of parties are in vogue these days). 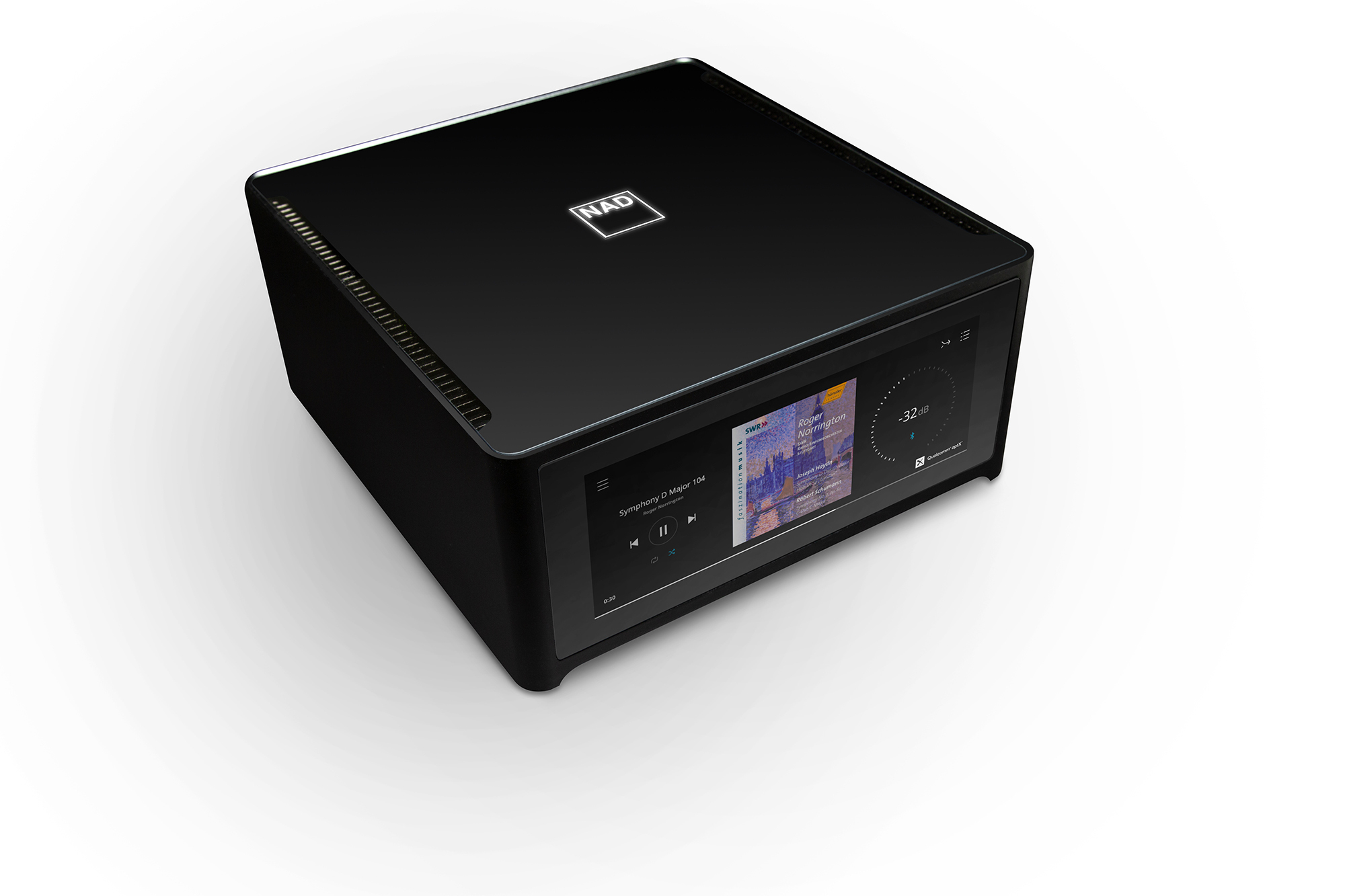 I tried Dirac and the resulting impulses several times. There was a noticeable difference, but being perfectly honest, I couldn’t tell you which I preferred, or that I didn’t prefer the unaltered sound. Tastes vary, and so do my moods and EQ tastes. Some might call me sonically fickle, but I also suspect I’m not alone in this.

Case in point: I once told someone I was going to work on a mix they didn’t like that night, but didn’t get the chance. I fired up the old mix for them the next day and was about to make excuses when they told me how much better it sounded. I kept my mouth shut.

I quite liked the M10 in action. It looks nice, sounds great, and the Dirac was fun to play with, even if the results weren’t particularly important to me. If you don’t care about phone/PC dependency, or perhaps even prefer it, the M10 will make n excellent addition to your audio setup, both audibly and visually.

But I have to be honest. If I pay $2,750 for a streaming amp with a touch display, I want to use said display. For everything.

This great-sounding streaming amplifier from NAD consolidates all your music sources and provides 100 watts of continuous, and highly musical stereo sound. It includes Dirac for tailoring the sound of the amp and your speakers using impulse responses. We also love the color display, but it’s underutilized. For the price, you shouldn’t be forced to use your phone for set up or selecting streaming sources.

0 0 0
Previous ArticleInstagram Gets Dark Mode Support on Android and iOS, Removes Following Tab for All Users
Next ArticleSigma FP – the world's smallest full-frame mirrorless – could be released this month
Comments (0)