Attention aspiring VR photographers: Google’s virtual reality photo app is finally available on the iPhone. Previously, the app was an Android exclusive, but now iPhone users can create and view VR photos, too.

The app, called Cardboard Camera, aims to make taking, sharing and viewing VR pics a breeze. You’ll still need a Google Cardboard or any number of generic phone-based VR headsets on the market to view the photos.

Cardboard Camera works similarly to Google’s Photo Spheres, except you’re limited to panoramic photos. You can’t capture the area above or below your sight line, which is a bummer as a complete Photo Sphere would be more immersive.

However, Cardboard Camera adds immersion by letting you record sound, so you can dictate what you’re seeing, or just capture ambient noises.

Cardboard Camera isn’t about creating the most immersive photos, but aims instead to make taking VR photos quick and easy. Since you don’t have to worry about aligning the on-screen dots just right, like you do with Photo Spheres, taking a panoramic VR image takes a lot less time and effort. 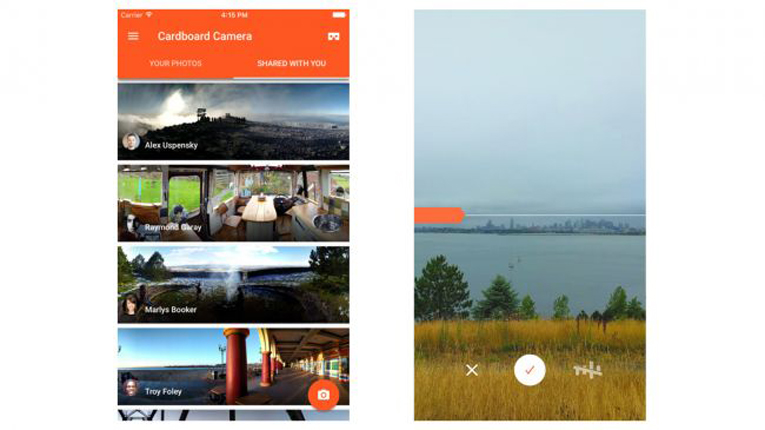 Sharing is super easy with Cardboard Camera, as you can send and receive shared photos within the app.

If your friends don’t have a VR headset, that’s OK, too. You can share a link with them to view your panoramic photos on the web. Google has an example gallery set up to illustrate what that looks like.

Cardboard Camera is a novel way to dabble in the world of virtual reality. The inclusion of sound definitely helps elevate the experience, but it’s still not as immersive as a 360-degree video.

Don't miss a deal at EBay DE
Best offers at FNAC
Discounts, Sales and Deals at Groupon
Save your money with John Lewis
Online-Shopping with O2 Mobile
Best products at Farfetch
Latest Posts