Ease of use, power and incredible image quality, in one lightweight package

The fact that your smartphone isn’t the best camera on the planet is obvious – it might be convenient, but as soon as you present it with a moving target, or want to take a bit more control over your photography, the limitations become clearer and clearer.

And that’s before you try to print a shot. Your photographs represent some of your most treasured memories, so sharing them in low resolution on social media shouldn’t be the last anyone sees of them. But printing calls for a sharp, high-resolution image, and that’s not something smartphones excel at either.

What camera phones are good at is quick sharing and portability – so what if we told you there was a camera with far better image quality and more power, but without the shoulder-busting weight and disconnectedness of traditional DSLRs?

The Canon EOS 250D carries on Canon’s tradition of top-quality photography kit – but with an emphasis on portability and sharing. This makes it the perfect camera for anyone who wants to bring home better, more printable, longer-lasting pictures from their next big day out.

It’s a camera you’ll always have with you – the world’s lightest DSLR with a moveable screen. At under 500g before you add a lens, it’s a camera you can carry around almost as easily as your camera phone, and that’s before you get to its other benefits.

It has a big, 24.1-megapixel sensor, for one thing – the much smaller sensor in a smartphone might make for a small device, but it also means less sharp images, and images that will print far worse. That doubles in poor light – if you’ve ever despaired at the noisy, blurry images your camera phone shoots inside, the EOS 250D is for you. It doesn’t just shoot images, either – you can also opt for 4K video and, because the EOS 250D has that larger sensor, your videos and pictures will have shallower, more pleasing depth of field.

The lenses you can attach are important as well – if you’ve ever tried to zoom in on a camera phone, you might have noticed that all that happens is that the camera crops in digitally. The result: the more you zoom in, the worse your shot looks. So much for good pictures of your kids at the beach, animals at the zoo or close-ups of flowers. It might be small, easy to use and affordable, but the Canon EOS 250D also supports the full Canon lens line-up so as your photography grows, your lens collection can too. Whatever you like to shoot, you’ll be able to find the perfect lens for your subject. 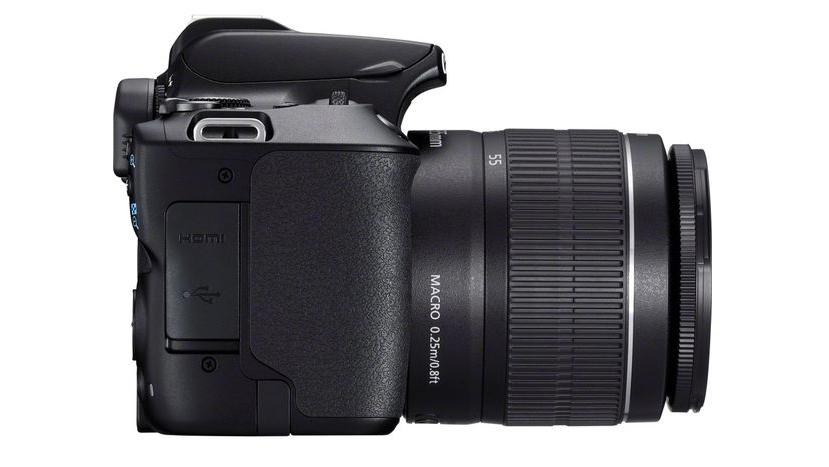 Of course, none of this means anything if the camera is hard to use. But, whether you know your shutter from your aperture or not, the EOS 250D is for you. Its Guided UI uses the 3in vari-angle screen on the back to not only show you the camera’s current settings but also explain what they mean. So if you want to take pictures with shallow depth of field, for example, the EOS 250D will let you do that with ease. The screen is also touch-sensitive, which makes using the EOS 250D just like using a smartphone. And when you’re ready to start using the EOS 250D’s more advanced modes, the buttons across the camera’s body make it quick to set up just how you want.

And, just like a smartphone, the EOS 250D is all about sharing. You can pair it with a smartphone via either Bluetooth or Wi-Fi, allowing you to share gorgeous images straight from the camera, wherever you are. The EOS 250D also has the ability to edit your shots without sending them anywhere – its Creative Assist feature allows you to add filters and effects to your images before you upload them. Your social posts will never have looked so good.

While the EOS 250D might borrow some of your smartphone’s better features, it will leave it for dust in most other respects. Take battery life, for instance – because the EOS 250D uses an optical viewfinder rather than a power-hungry screen, it can shoot over 1,000 images on a single charge.

Stepping up your photography starts with the right kit, but jumping to a high-quality camera doesn’t have to mean a sudden jump in how complicated your camera is to use. That means fewer missed moments and more impressive results, without affecting image sharing and ease of use. And, of course, with far more potential than your smartphone ever had.

Don't miss a deal at Currys
Best offers at Go Daddy
Discounts, Sales and Deals at EE Mobile
Save your money with Virgin Media
Online-Shopping with Bodybuilding
Best products at Mobiles
Latest Posts