Vizio SB2021n-G6 review: This budget 20-inch soundbar is the perfect match for a second TV

Vizio’s tiny, budget-priced SB2021n-G6 soundbar is a champ when it comes to beating expectations. This 20-inch, $130 soundbar (which you can snag for $98 at Walmart.com) doesn’t look like much, yet it manages to crank out impressively rich, detailed audio for its size, while DTS Virtual:X processing helps to deliver 3D effects that sounds amazing given the SB2021n-G6’s pared-down specs.

Naturally, some serious corners have been cut to achieve the SB2021n-G6’s budget price tag, with the soundbar lacking such basic features as HDMI inputs (forget lossless or even Dolby Digital Plus audio) and Wi-Fi connectivity (meaning you won’t be able to control the soundbar with an app). For those reasons, I wouldn’t recommend the SB2021n-G6 for a large or even medium-sized home theater setup. That said, the SB2021n-G6 makes for a terrific, inexpensive way to upgrade the sound on a bedroom TV or in a cramped dorm room.

Being the $130 2.1-channel soundbar that it is, the Vizio SB2021n-G6 comes equipped with just three drivers: a pair of 1.61 x 2.24-inch drivers in the main unit for the left and right channels, plus a down-firing 5.25-inch driver for the wireless subwoofer. Save for a small rear vent that helps to augment the soundbar’s bass response, that’s all you get in terms of drivers and other acoustic features.

Measuring just 20 by 2.19 by 4.45 inches, the soundbar itself is surprisingly compact, and at a mere 3.69 pounds, it’s easy to carry. Indeed, you could easily fit the SB2021n-G6 on a shallow dresser in front of your bedroom TV. That said, the soundbar doesn’t come with any mounting brackets or holes, so unless you come up with your own wall-mounting solution, you’ll need to place the soundbar on a flat surface in front of your TV set. 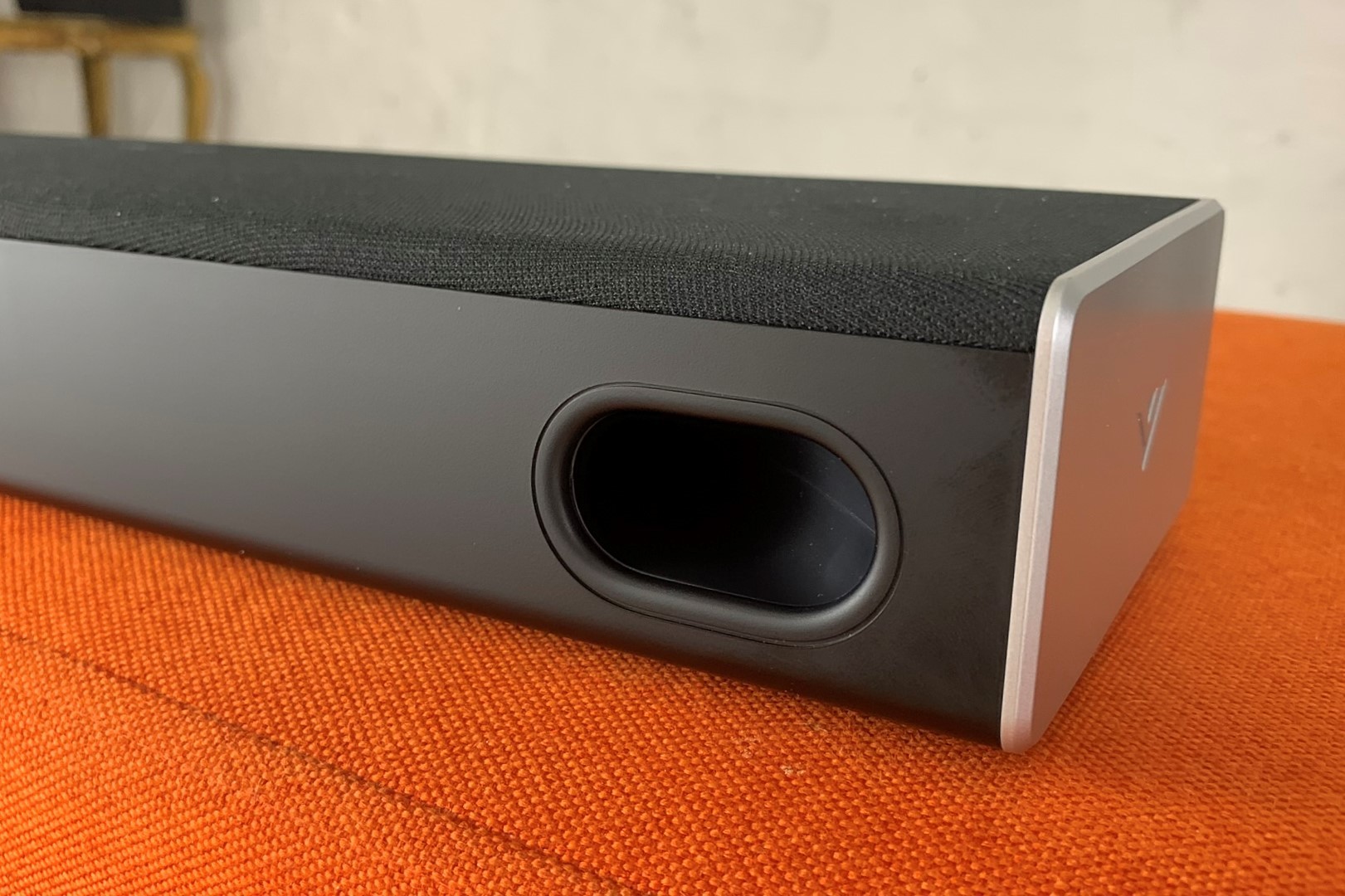 The 7.68 x 7.68 x 8.46-inch wireless subwoofer is also pretty small as far as soundbar subwoofers go, although it still manages to pack a punch. The diminutive sub makes for easy placement in a cramped room, although you should be mindful of the exposed down-firing driver on the bottom of the housing.

Like many of its current entry-level soundbars, Vizio’s SB2021n-G6 doesn’t come with any HDMI ports. (Starting in 2020, all Vizio soundbars, including the budget models, will feature HDMI inputs.) Instead, you get an optical (Toslink) input, a digital coaxial input, a 3.5mm audio jack (which comes with a 3.5mm-to-stereo RCA cable), and a USB port for thumb drives. The good news is that Vizio supplies all the cables you’ll need in the box.

While both the optical and coaxial digital audio inputs can support compressed Dolby Digital and DTS audio, they lack the bandwidth for Dolby Digital Plus or lossless Dolby TrueHD and DTS-HD Master Audio. And needless to say (but we’ll say it anyway), there’s no 4K passthrough or any kind of video passthrough on the SB2021n-G6; instead, you’re simply sending audio to the soundbar your TV’s Toslink, digital coaxial, or analog RCA connectors. 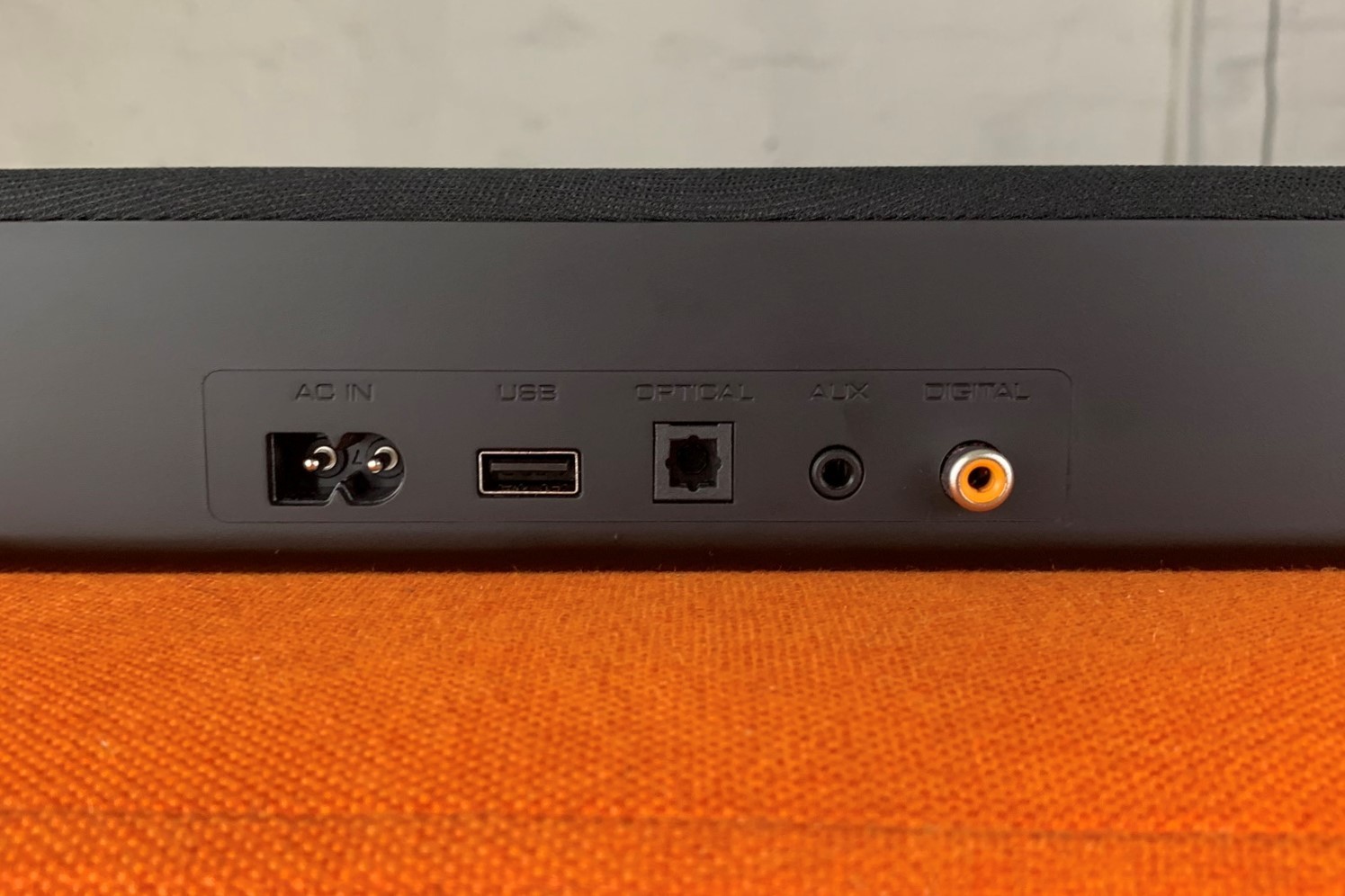 Because of its limited collection of inputs, setting up the SB2021n-G6 is a piece of cake. You simply plunk the soundbar in front of your TV, connect it to your TV using one of the supplied audio cables, then plug in the soundbar’s power cord.

Because it lacks Wi-Fi connectivity, you can’t use an app (such as Vizio’s SmartCast app) to control the SB2021n-G6’s functions or settings, and Alexa and Google Assistant support are (naturally) out of the question. Looking on the bright side, however, the lack of app support means you don’t have to contend with connecting the soundbar to your Wi-Fi network, an often tedious and frustrating process.

Sitting on the top of the SB2021n-G6’s fabric-covered housing are buttons for power, input selection, Bluetooth, and volume up/down. The front of the soundbar features a single LED indicator that’s little more than a dot, which glows different colors depending on which audio input is active. Unfortunately, that means there’s no visual indicator for the volume level, so you could be in for a loud surprise if you previously left the sound cranked up.

The SB2021n-G6’s non-backlit, somewhat chintzy remote only has a few buttons, but it’s also relatively easy to use. The input button on the top is flanked by the power and Bluetooth buttons, while a five-way control pad just beneath lets you adjust the volume, skip tracks, and play or pause your music. Beneath the five-way pad sits a mute button, with the volume-leveling TruVolume button and DTS Virtual:X button on the left, while Movie and Music mode buttons are on the right. A final row of three buttons let you tweak the subwoofer, bass, and treble settings. Missing in action are night mode and dialog enhancer settings. 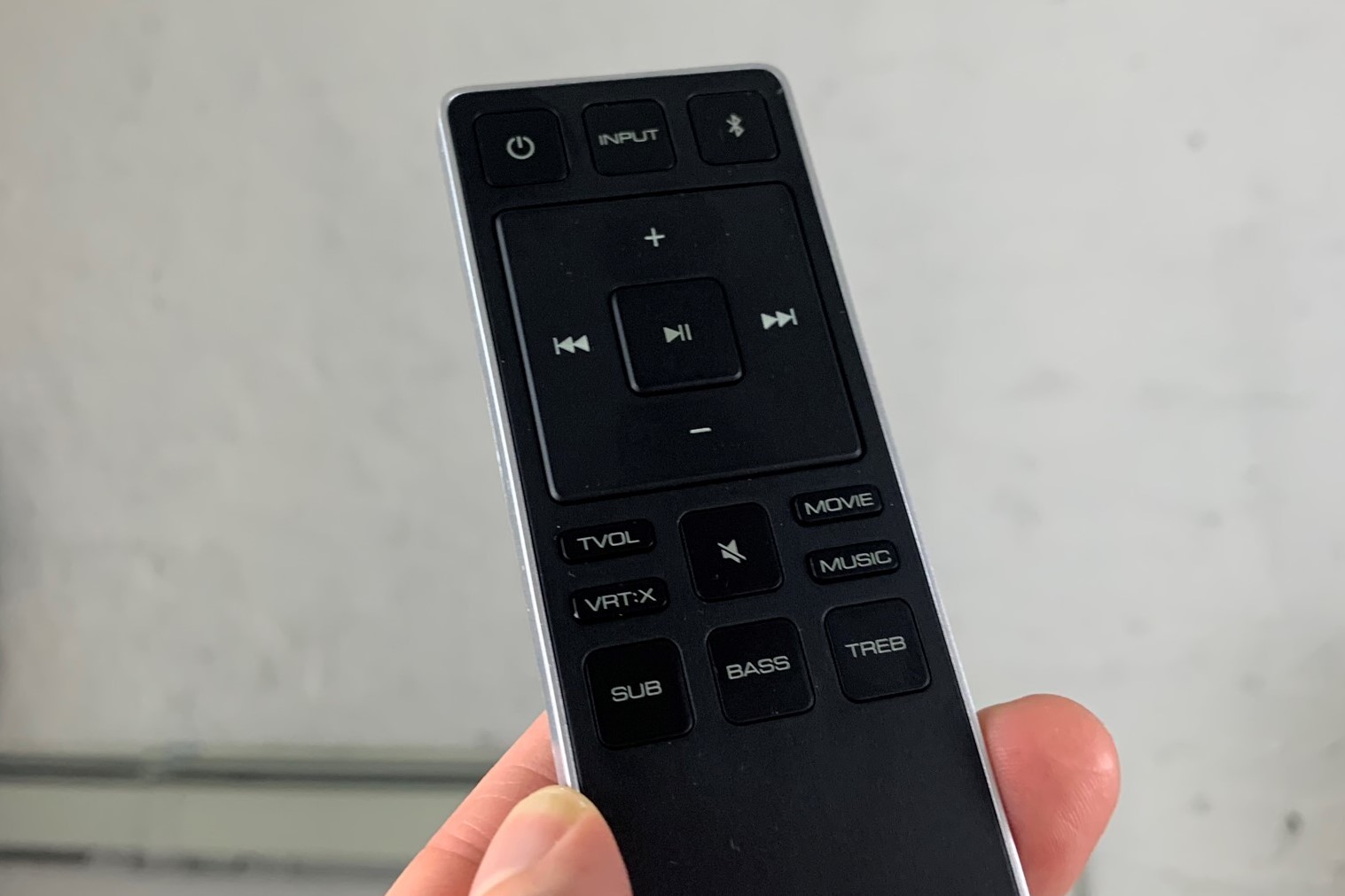 Now, let’s be perfectly clear on a couple of points: a $130 soundbar and subwoofer combo with just three drivers can’t compete with a $1,000-plus soundbar with multiple foward-, upward-, and side-firing drivers. By the same token, DTS Virtual:X can’t replicate the precise sonics of physical surround and height speakers. If you want to hear vivid, discrete sound effects coming from behind you or above, or you want to enjoy the finer details of a high-resolution music track, you’ll have to pony up for a much pricier soundbar package.

That said, I was mighty impressed with the audio that this relatively puny soundbar was able to crank out, complete with a wide soundstage that belied the SB2021n-G6’s narrow 20-inch housing, not to mention a palpable surround presence, noticeable height cues, aggressive (but not too pushy) bass, and a decent dose of high-end detail.

Of course, DTS Virtual:X does the heavy lifting as far as the SB2021n-G6’s surround performance goes, and I was particularly pleased that Vizio’s implementation of the virtual 3D technology didn’t sound as harsh as I’ve heard on competing soundbars. Indeed, I kept DTS Virtual:X enabled during most of my testing, turning it off only for music.

I started my testing with the thrilling opening title sequence from 1978’s Superman, which has been remastered in 4K and Dolby Atmos. Of course, for the purposes of the 2.1-channel SB2021n-G6, Superman’s Dolby Atmos soundtrack is first downmixed to stereo before getting the DTS Virtual:X treatment.

Given that, however, the results are impressive for a mere 20-inch soundbar. John Williams’ Oscar-nominated score sounded crisp and punchy (albeit with a hint of harshness from the brass section), and I could detect height cues as Marlon Brando’s credit soared over the screen, while Richard Donner’s “directed by” credit was capped by an impressive thump from the compact subwoofer. I even liked how the SB2021n-G6 handled the tricky surround effects when the Phantom Zone scoops up General Zod and his minions, with the sound of the interstellar prison panning convincingly over my right shoulder as it twirled out of the frame. (Just to be clear, when I switched back to my usual 5.1-channel system with Dolby Atmos height virtualization, the Phantom Zone surround effects were much more pronounced and detailed, particularly from the rear.)

Next, I tried a scene from X-Men: Apocalypse that we often user as a handy Dolby Atmos demo: specifically, the scene in which a high school-aged Scott Summers destroys a bathroom stall with his nascent energy beams. As with the soundtrack for Superman, Apocalypse’s Atmos soundtrack is downmixed to 2.0 Dolby Digital by the SB2021n-G6 before being upmixed by DTS Virtual:X processing. Even with those caveats, the scene sounded pretty darned good, with the particles of plaster from the ruined bathroom ceiling clattering effectively from the sides and even a tad from above. For $98 (if you buy from Walmart.com), that’s not bad at all.

I finished up my movie scenes with the launch sequence from Apollo 13, which features an object-based DTS:X soundtrack on the 4K Blu-ray version. Again, the SB2021n-G6 is only giving us its DTS Virtual:X interpretation of the disc’s DTS:X audio, but I was still fairly wowed by how this narrow, $130 soundbar managed to shake my living room as the Saturn V rocket roared to life, with the soundstage widening impressively as the fuel pumps gurgled and the spacecraft slowly rose from the launchpad.

To get a sense for how the SB2021n-G6 handles spoken dialog, I dipped into an episode of Suits. While I never had trouble hearing the quips and movie quotes from the chatty, dapper lawyers, the dialog did sound a tad harsh and echo-y, which is pretty typical when it comes to 2.0-channel soundbars that lack dedicated center channels.

Switching over to music (and for these tests, I turned DTS Virtual:X off and enabled the Music EQ sound mode), I teed up the title track from Bruce Springsteen’s The Ghost of Tom Joad, and once again the tiny SB2021n-G6 punched well above its weight. Streamed over Bluetooth via my iPhone, The Boss’s raw, spare vocals sounded impressively crisp and clear, with a nice rising warmth as the synthesizers kick in. Pricier soundbars that I’ve tested have, of course, done a better job reproducing the high-end details of the Springsteen’s acoustic guitar work, and naturally the SB2021n-G6’s narrow (with DTS Virtual:X turned off) soundstage is pretty cramped compared to soundbars in the 30- and 40-inch range. That said, this 20-inch soundbar still managed to turn in a surprisingly punchy, dynamic performance.

Next, I queued up Vlado Perlemuter’s rendition of Ravel’s solo piano works on the Nimbus Records label, and I came away with the same general impressions as I did from The Ghost of Tom Joad: nice warmth and atmospherics with a decent amount of detail, albeit with something missing on the high end. I also noticed a hint of distortion at higher volume levels, which isn’t too surprising given how tough piano pieces can be on speakers. (Incidentally, I didn’t detect any distortion problems while testing out movies, even when I cranked the volume.)

Finally, it was time for Ciara’s “Level Up,” and again, same overall story: pleasingly warm, crisp, and thumpy sound, although a bit wanting in high-end detail.

You can’t expect much from a budget 20-inch soundbar, yet the 2.1-channel Vizio SB2021n-G6 and its onboard DTS Virtual:X audio processing consistently exceeded my expectations. While it lacks HDMI ports and Wi-Fi connectivity, the SB2021n-G6’s relatively rich, detailed, and expansive audio is a perfect fit for boosting the sound of a second TV or for budget-minded viewers in cramped living quarters.

Don't miss a deal at Argos
Best offers at EE Mobile
Discounts, Sales and Deals at Argos
Save your money with H&R Block
Online-Shopping with Microsoft Store
Best products at House of Fraser
Latest Posts