A customer at Camera West in California recently traded in an interesting piece of photographic history, the Calypso underwater camera. The 35mm film camera was the first of its kind that didn’t need housing to be used underwater.

The Calypso was the brainchild of legendary explorer Jacques Cousteau and Belgian engineer Jean de Wouters. The Calypso was released in 1961 as the first 35mm underwater camera which could be used without housing. Cousteau wanted a small, simple camera you could use on land and underwater without any fuss.

When the Calypso launched, there were a trio of available lenses. Two of the lenses were manufactured by SOM Berthiot, 28mm and 35mm prime lenses. A third lens, a 45mm prime, was manufactured by Angenieux. In the video below, the Calypso is shown with the SOM Berthiot 35mm F3.5 lens. The knob on the left side of the lens barrel is used for focusing and the knob on the right controls the aperture.

The camera includes a distinct shutter design. When firing the shutter, the camera simultaneously winds the film. Since the camera is always ready to fire, there’s a shutter release lock on the top of the camera. The original camera strap is included and as you can see above, there is a built-in mechanism in the links to open the camera for loading film.

The camera’s construction is quite simple. Camera components are in the top portion of the body and the lower area is primarily a shell. The camera is constructed from an alloy and is coated in black enamel. Each component includes water sealing and the grip is faux sealskin. The camera’s top shutter speed is 1/1000s and it does include a port for using a flash.

To construct the camera, you put the two camera body components together and then mount the lens. Each lens includes a notch, allowing you to tell when the lens is fully mounted and sealed against water. At the time of its launch, the Calypso was rated to for use up to 200′ (60m) underwater. 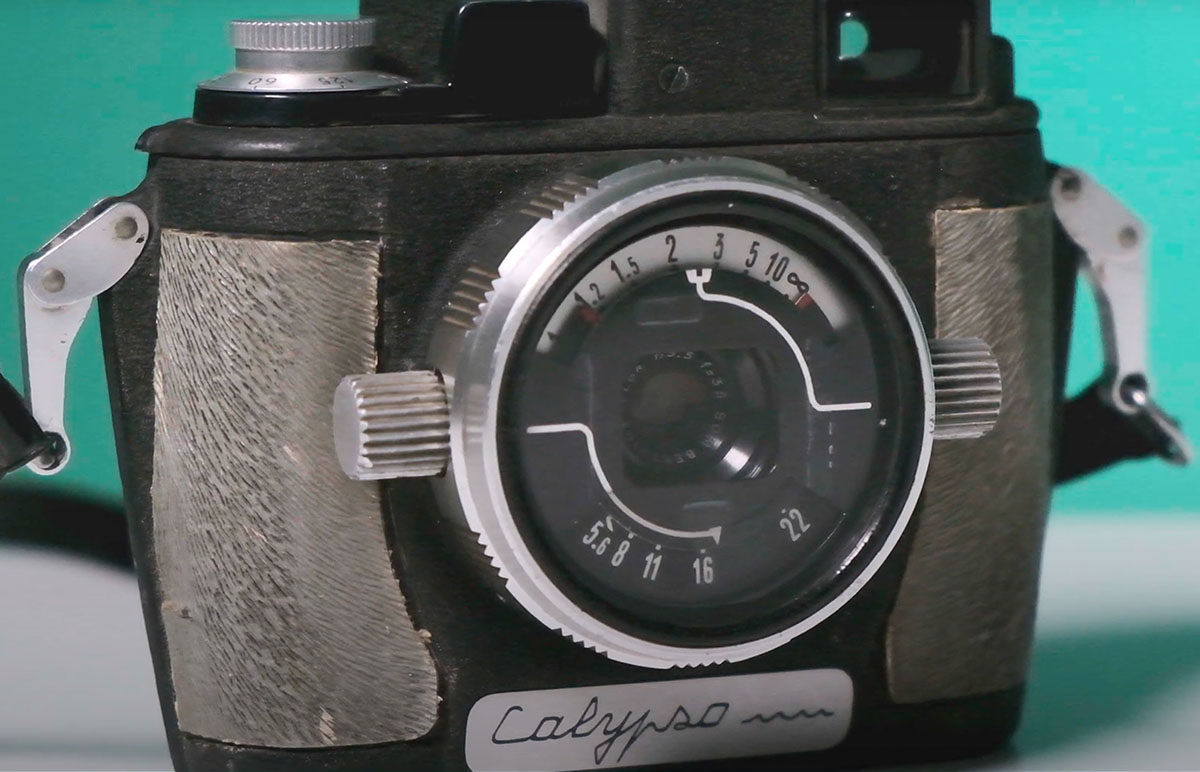 In 1962, Nikon took over the production of the Calypso camera, rebranding it as the iconic Nikonos underwater 35mm camera. This was not Nikon’s first foray with underwater photography, as the Japanese company had already developed an underwater housing for the Nikon S2 camera in 1956. After teaming up with the Calypso’s original manufacturer, La Spirotechnique, the redeveloped Nikonos was released. Interestingly, in Nikon’s history of the Nikonos, Nikon says the camera was water pressure-resistant down to 50m rather than 60m, and the shutter speed topped out at 1/500s.

Ultimately, Nikon released three Nikonos cameras built upon the legacy of the Calypso, with the Nikonos III releasing in 1975. Nikon then went back to the drawing board and designed a full original Nikonos IV-A. This camera was released in 1980 and included new features such as a TTL exposure meter, aperture-priority AE control, an electronically controlled shutter, hinged open-and-close camera back and improved usability. The Nikonos V came next and was sold for 17 years before its discontinuation in October 2001. Nikon also released an autofocus underwater camera, the Nikonos RS AF, which could be used at depths of up to 100m.

Don't miss a deal at Sky
Best offers at The Home Depot
Discounts, Sales and Deals at Go Daddy
Save your money with House of Fraser
Online-Shopping with Currys
Best products at Turbo Tax
Latest Posts