Qualcomm Snapdragon 865 preview: Next-gen chipset will power your phone in 2020

Qualcomm expands its 5G portfolio for 2020, but its latest flagship chipset also includes a handful of added benefits

We’ve known about the Snapdragon 865 – Qualcomm’s upcoming top-end chipset that’s due to replace the widely-used 855 processor – for quite some time, but now we finally have our first official details of what to expect when it begins to power flagship smartphones in 2020 and beyond. We also have at least some idea of how well it’s likely to perform against its competitors.

Qualcomm Snapdragon 865 preview: What you need to know

However, before we dive right into the technical details and what’s new – preventing me from boring you with all sorts of data from the get-go – let’s try and keep things simple to start with. The upcoming Snapdragon 865, like its predecessor, is an octa-core chipset that’s built using a 7nm fabrication process with what’s known as a heterogeneous architecture.

This means, like last year, that rather than use a typical arrangement of two quad-core CPUs, it has an unusual combination of three cores, which each perform different tasks. The Snapdragon 865 is built up using exactly the same combination of cores as last time, with one single-core CPU – called the “Prime Core” – clocked at 2.84GHz (the same as the 855) working with a triple-core “Performance” CPU, which is clocked at a slightly lower 2.42GHz. Lastly, there’s the quad-core CPU, dubbed the “Performance Core”, which is clocked at 1.8GHz. 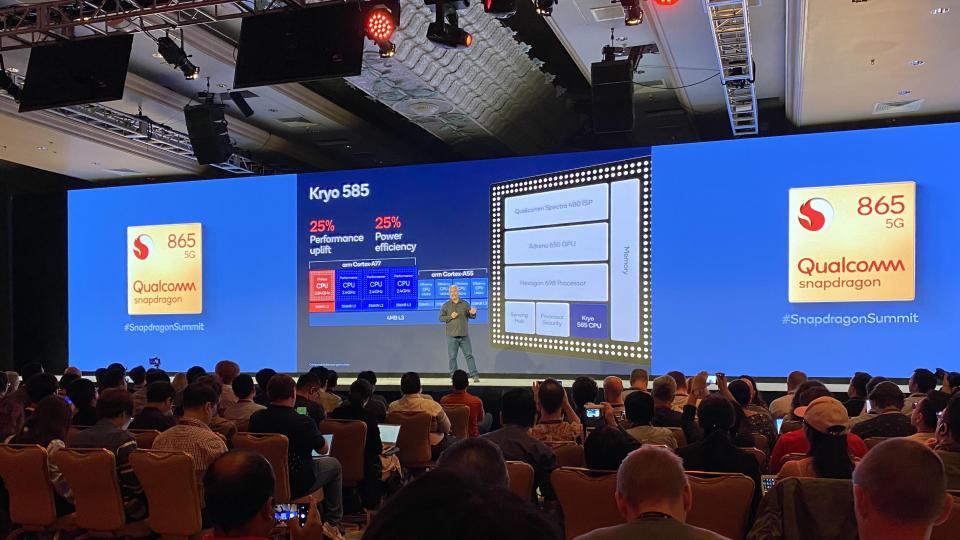 It’s all a bit confusing, and admittedly it took me a while to wrap my head around it all last year, but what this means is that the four lower-powered cores take care of everyday business, while the others kick in when it comes to performing more intensive tasks. It’s an effective arrangement, that’s for sure, and with the previous generation, it did a pretty good job at bringing Qualcomm closer in line with the homebrew chipsets from Apple, Huawei and Samsung.

Architecturally speaking, it’s almost exactly the same as the existing Snapdragon 855, but Qualcomm has somehow managed to squeeze some extra performance from the silicon. Qualcomm says that the 865 is actually capable of delivering a performance boost of up to 25%, with a 25% boost to power efficiency.

The 865 also has faster graphics processing, thanks to the new Adreno 650 GPU and a handful of new games-focussed features. The gaming side of things includes new features such as dynamic shadow rendering, motion blur effects for smoother-looking gameplay, and support for more advanced lighting reflections from multiple sources. Likewise, Game Colour Plus 2.0 supposedly brings non-HDR content into a near-HDR colour space. 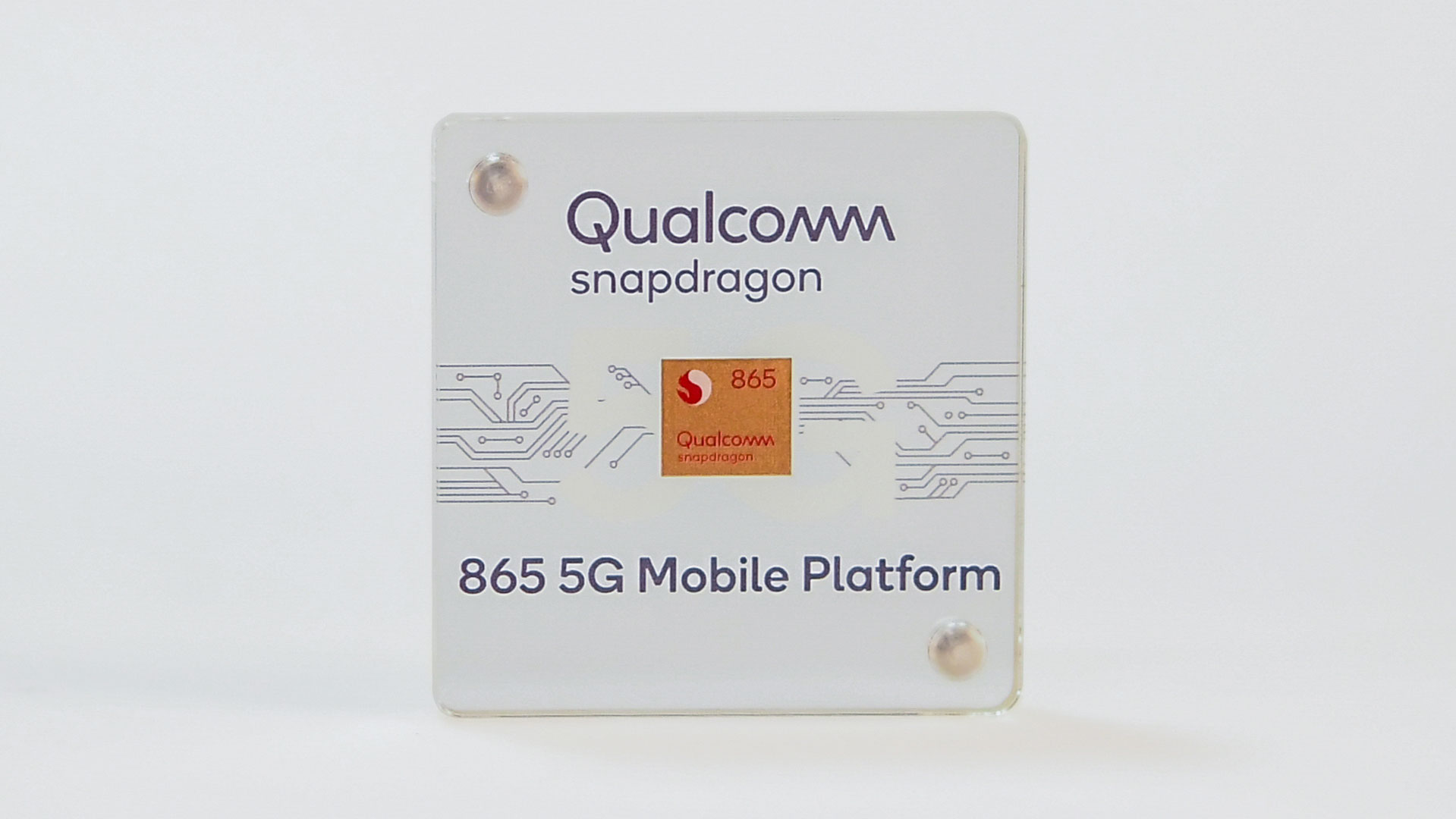 Most importantly, however, Qualcomm says that the Adreno 650 GPU has been decoupled, which means that Qualcomm can deploy specific GPU updates through the Google Play Store, rather than launch big all-encompassing OS upgrades. This should allow for faster hotfix deployments and more regular patches to help boost gaming performance.

The next big upgrade for the Snapdragon 865 is its new, fifth-generation “AI engine”. Qualcomm says that the new update brings 2x faster AI performance over the 855, with the new engine capable of performing 15 trillion operations per second.

This brings us to the Snapdragon 865’s camera improvements, with the help of the new Spectra 480 ISP (Image Signal Processor) and Hexagon 698 DSP (Digital Signal Processor). These upgrades allow for 2-gigapixel processing per second, with the ability to record 4K video and capture 64-megapixel pictures at the same time.

On that note, as manufacturers begin to launch phones with high-megapixel-count cameras, the Snapdragon 865 also supports 200-megapixel cameras. You can also capture 8K video for the very first time, or record frame rates up to 120fps at 4K. Likewise, 960fps slow-mo footage no longer has a recording time limit – which was previously limited to 0.4 seconds.

Finally, let’s discuss the Snapdragon 865’s 5G capabilities. Sadly, it doesn’t include an integrated 5G modem like the less-powerful Snapdragon 765, and instead uses the same 5G arrangement as the Snapdragon 855. This means that the Snapdragon 865 uses the X55 5G modem, which is a separate component that’s capable of delivering download speeds up to 7Gbits/sec, provided you’re signed up to a 5G contract and you have the coverage.

It’s a shame that the Snapdragon 865 won’t be offering any substantial 5G improvements in 2020, but then again the infrastructure still isn’t properly in place. In the UK at least, 5G coverage is pretty poor, and you won’t be reaching anywhere close to those maximum quoted download speeds, at least for a little while longer.

So, it’s not all about 5G then, and I certainly can’t blame Qualcomm for focusing its efforts elsewhere this year. Featuring a handful of improvements, from graphics rendering to power efficiency, the Snapdragon 865 is going to be a formidable chipset. Throw in the new camera features, and 2020 is set to be an exciting time for flagship smartphones.

Don't miss a deal at Nike DE
Best offers at Vodafone UK
Discounts, Sales and Deals at Newegg
Save your money with Argos
Online-Shopping with Sky
Best products at The Home Depot
Latest Posts