Motorola has been on a tear this year: It has announced or released more than ten new smartphones in 2020, and rumor has it there’s at least one more big reveal coming soon. For what it’s worth though, the brand’s latest mid-range offering the — Motorola One 5G — might be its most appealing new release yet. It’s not a flagship in the vein of the Edge Plus, or the continuation of an experiment like the Razr. Instead, it’s a sub-$500 smartphone running a mostly clean flavor of Android 10 with a handful of unexpected features and an enormous battery. In other words, it’s exactly the kind of introduction to 5G that Motorola’s cost-conscious fans probably need.

There’s just one catch, though. Motorola promised earlier this year it would release a 5G smartphone for under $500, and, well, you’re looking at it. For now, though, the company declined to say how much less than $500 the One 5G will cost — the most Motorola would say is that the phone will wind up on AT&T soon, and that a Verizon-friendly model with support for mmWave 5G is set to land in October. In other words, stay tuned for official pricing.

Now, onto the phone itself. Many mid-range 5G smartphones use Qualcomm’s Snapdragon 765 and the Motorola One 5G is no exception — it’s paired here with 4GB of RAM and 128GB of internal storage, though you can add microSD cards as large as 1TB. (A quick aside: We usually see this chipset in slightly more expensive phones, but Qualcomm apparently slashed its prices earlier this year.) While Motorola’s choice of chipset isn’t much of a surprise, the rest of the stuff around it is: The phone features, among other things, a whopper of a 6.7-inch Full HD+ screen complete with HDR10+ certification and a 90Hz refresh rate. That means this display is just as big and runs just as smoothly as Motorola’s flagship Endless Edge display; here’s hoping its tall, 21:9 aspect ratio means regular people have a chance of wrapping their hands around this thing. 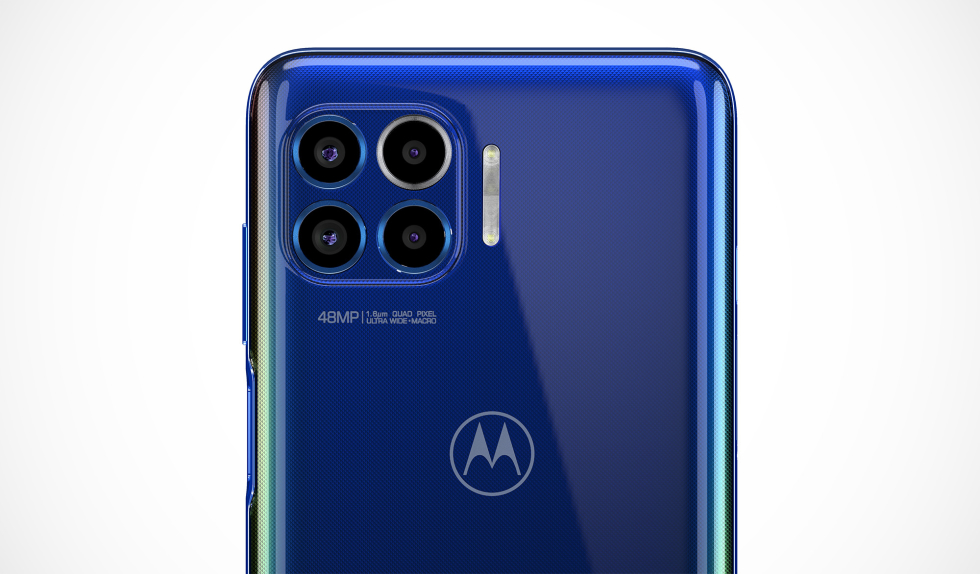 Powering the whole shebang is a 5,000mAh battery, which we’re hoping to see multi-day use from since it’s paired with a chipset that sips power rather than gulps it. Meanwhile, around back sits a quartet of cameras: You’ll spend most of your time shooting with the main, 48-megapixel wide sensor, but it’s flanked by a 2-megapixel depth sensor, an 8-megapixel ultra-wide camera with a 118-degree field of view and a curious 5-megapixel macro camera for extreme close-ups. Now, the jury is still out on whether people are really clamoring for this kind of highly specialized sensor, but Motorola gets credit for sweetening the deal in an unusual way — it gave that macro camera a tiny, proper ring light. (And in case you were wondering, no, you cannot use it as a more appealing kind of flash for the other cameras.)

The front-facing camera situation is similarly surprising, since Motorola saw fit to add two of them here. The first is a relatively straightforward 16-megapixel camera with an f/2.0 aperture, and you can count on this one to deliver the stronger selfies. The other camera, meanwhile, is an 8-megapixel ultra-wide that Motorola says can squeeze an extra three or four people into the frame at once. Throw in a side-mounted fingerprint reader, a headphone jack and NFC for all those COVID-era contactless payments, and it feels like we’re looking at a phone that could give Google’s new, cheap Pixels a real fight in the looming 5G mid-range smartphone war.

Of course, there is too often a gap between a phone’s potential on paper and its performance in the real world. Motorola is eyeing an imminent launch so, stay tuned to see how its unusually appealing new phone stacks up against the competition.

Don't miss a deal at Farfetch
Best offers at Surfdome
Discounts, Sales and Deals at John Lewis
Save your money with Mobiles
Online-Shopping with Bodybuilding
Best products at Ticketmaster UK
Latest Posts