Logitech’s Z623 speaker set has been designed with the film fan in mind. They are one of very few 2.1 speaker sets to be fully certified by cinema audio specialists THX, which should mean movie soundtracks sound exactly how the director intended. We would argue this isn’t strictly true, as most directors will want you to hear their movies in surround sound, but we were still interested if the Z623s could deliver impressive audio. 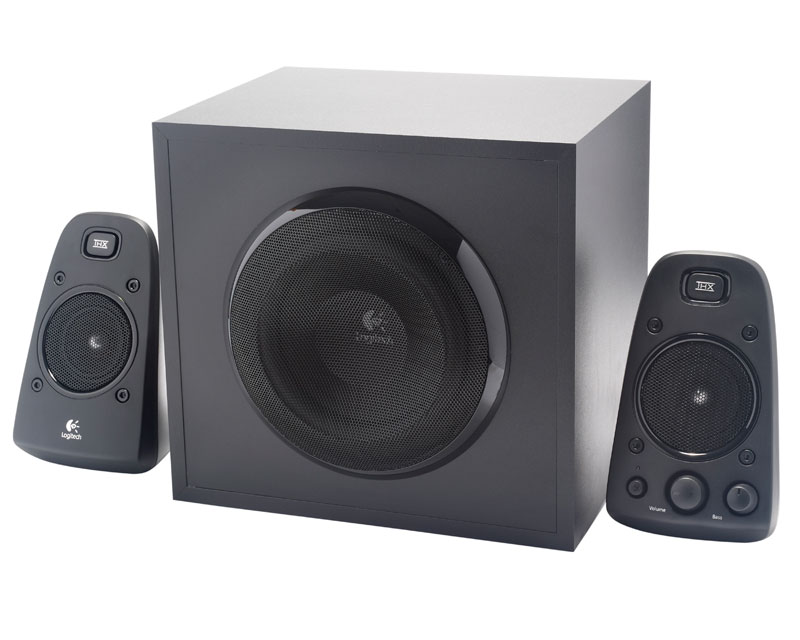 The subwoofer is fairly heavy, but also reasonably compact. The 3.5mm input makes is easy to connect your PC, or a games console using the stereo phono inputs. Power, bass and volume controls are conveniently placed on the right satellite, making it easy to adjust tone settings without reaching for the subwoofer. It also houses an auxiliary 3.5mm input and headphone jack for a simple way to attach a pair of headphones or an MP3 player.

Because it’s so multifunctional, the right satellite connects to the subwoofer with a rather chunky captive serial cable; thankfully it’s still a generous 1.85m long so you should have no problem placing it where you want it. The left satellite uses a more common captive phono cable, which is an even longer 1.95m long.

We were initially impressed with the Z623’s audio quality. Classical music sounded crisp and clear, with no distortion at high volume. The immensely powerful subwoofer managed not to overshadow the main speakers.

Playing our acoustic tracks showed up a lack of high-end treble. Mid-tones and low notes in our heavier test tracks sounded great even before we’d reached for the bass setting, but hi-hats and other top-end frequencies were definitely lacking. At only 50 per cent maximum volume we had already filled our test room with sound, which would make this set a good match for even a large-sized room.

We had high expectations of the Z623, if only because of its high price. It excels in some areas, most notably the conveniently placed controls and multiple inputs, but the unbalanced audio quality makes it difficult to recommend.

It certainly has volume, but without a tone control to counteract the weak treble, music simply isn’t as well rounded as other 2.1 sets. If you don’t need surround sound but still want something with serious volume, Corsair’s SP2500 set is a better choice.

Don't miss a deal at Farfetch
Best offers at Groupon
Discounts, Sales and Deals at Microsoft Store
Save your money with Bodybuilding
Online-Shopping with Ticketmaster UK
Best products at TalkTalk Phone and Broadband
Latest Posts