LG tends to fly under the radar as a PC maker, yet its laptops—including the recently launched LG Ultra PC 17—are some of the most interesting ones around.

Weighing in at 4.3 pounds, LG’s Ultra is surprisingly light for laptop with a 17-inch display and an Nvidia GeForce GTX 1650 graphics card inside. It’s as if LG sized up its Gram 17 notebook, which at three pounds is perhaps one of the most underappreciated laptops on the market, and decided to make a version that plays games.

The result is admittedly less breathtaking than the aforementioned Gram—it doesn’t quite feel like it’s defying physics when you pick it up—but also more practical. The Ultra’s 17-inch screen really shines when you’re using it for a round of Deep Rock Galactic or a run through Hades. While its performance has notable limitations, it’s ultimately a careful balance with portability and battery life. 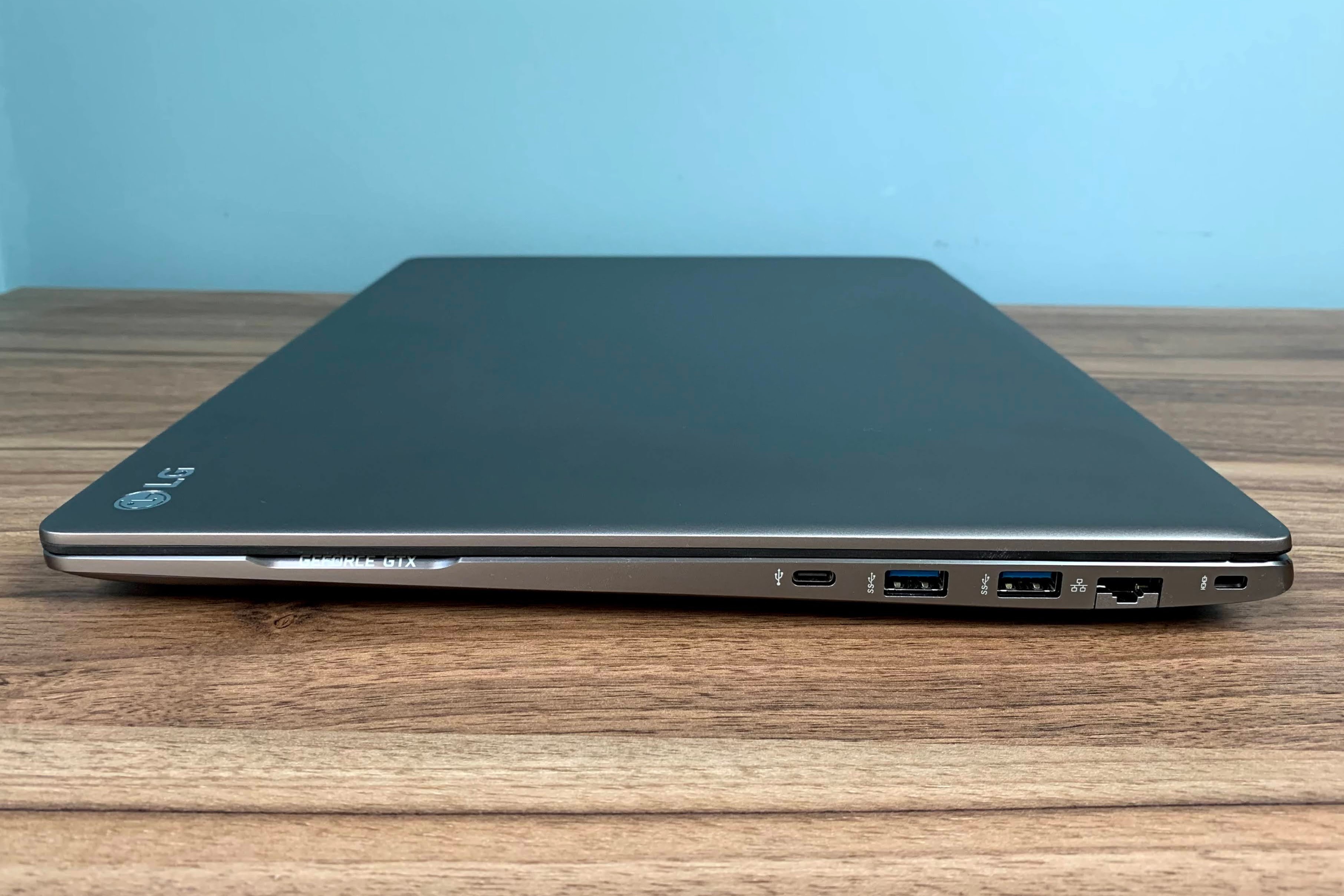 Either way, you’re not getting a workhorse for heavy-duty media editing—a laptop with one of Intel’s H-series processors would be a better fit for that. Instead, you get solid battery life for basic productivity, especially given the discrete graphics card inside. More on that in the Performance section below.

The Ultra PC 17 also has a great array of ports. While the lack of Thunderbolt 3 support is a downer, the inclusion of ethernet is a rare treat, as is the full-sized HDMI port for playing games or doing work on a larger screen. 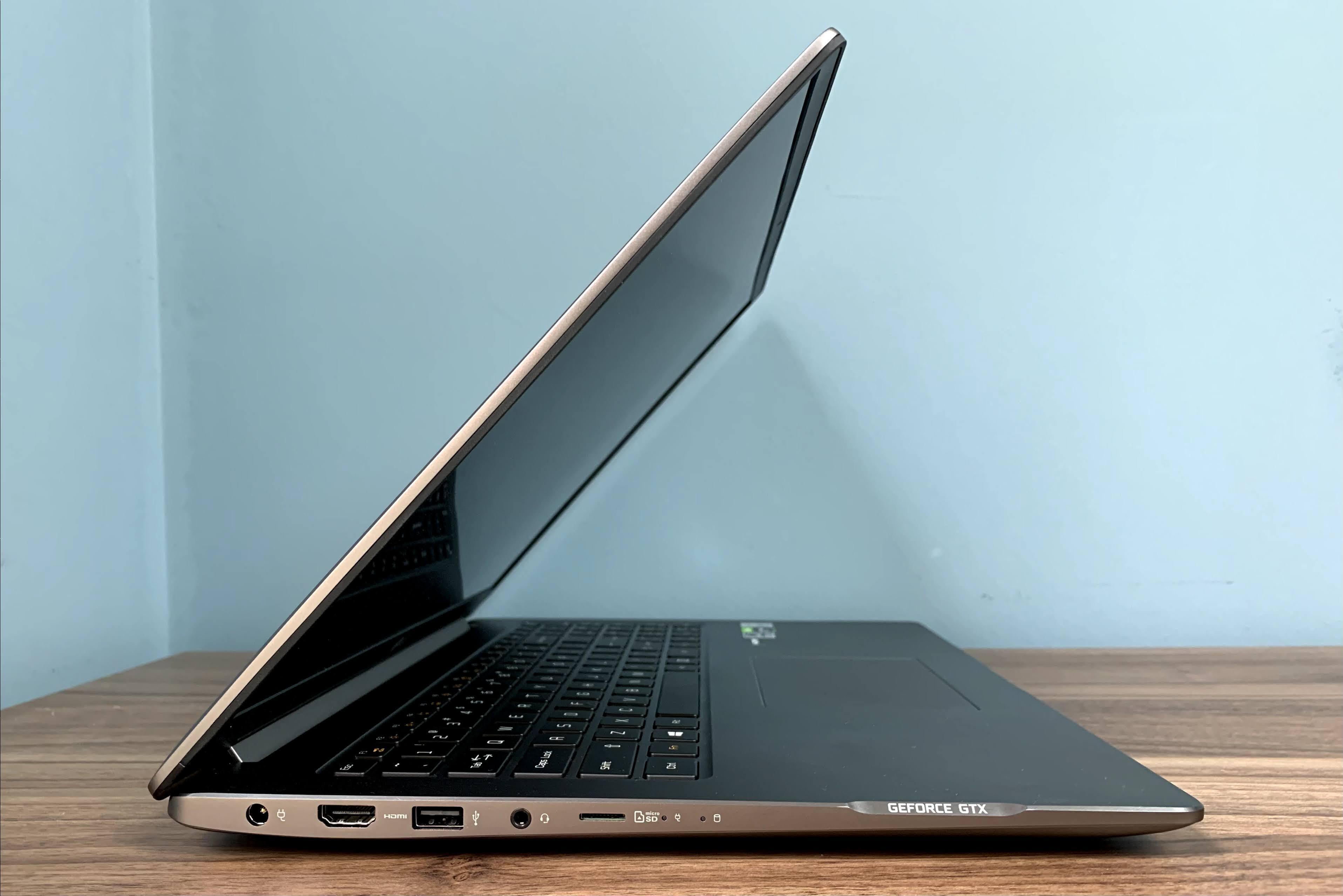 While the laptop comes with a proprietary charger, you can enable USB-C charging while the laptop is off through a setting in LG’s Control Center software, accessed by pressing Fn-F1. That same menu also has an option to stop charging the Ultra PC at an 80-percent battery level, which can preserve long-term battery life if you’re mostly using it on outlet power.

One more nice touch: The LG Ultra PC 17 chassis is held together with Phillips screws. Removing them lets you pry open the laptop’s bottom panel. Inside you’ll find a spare slot for a RAM upgrade, along with easy access to the battery. 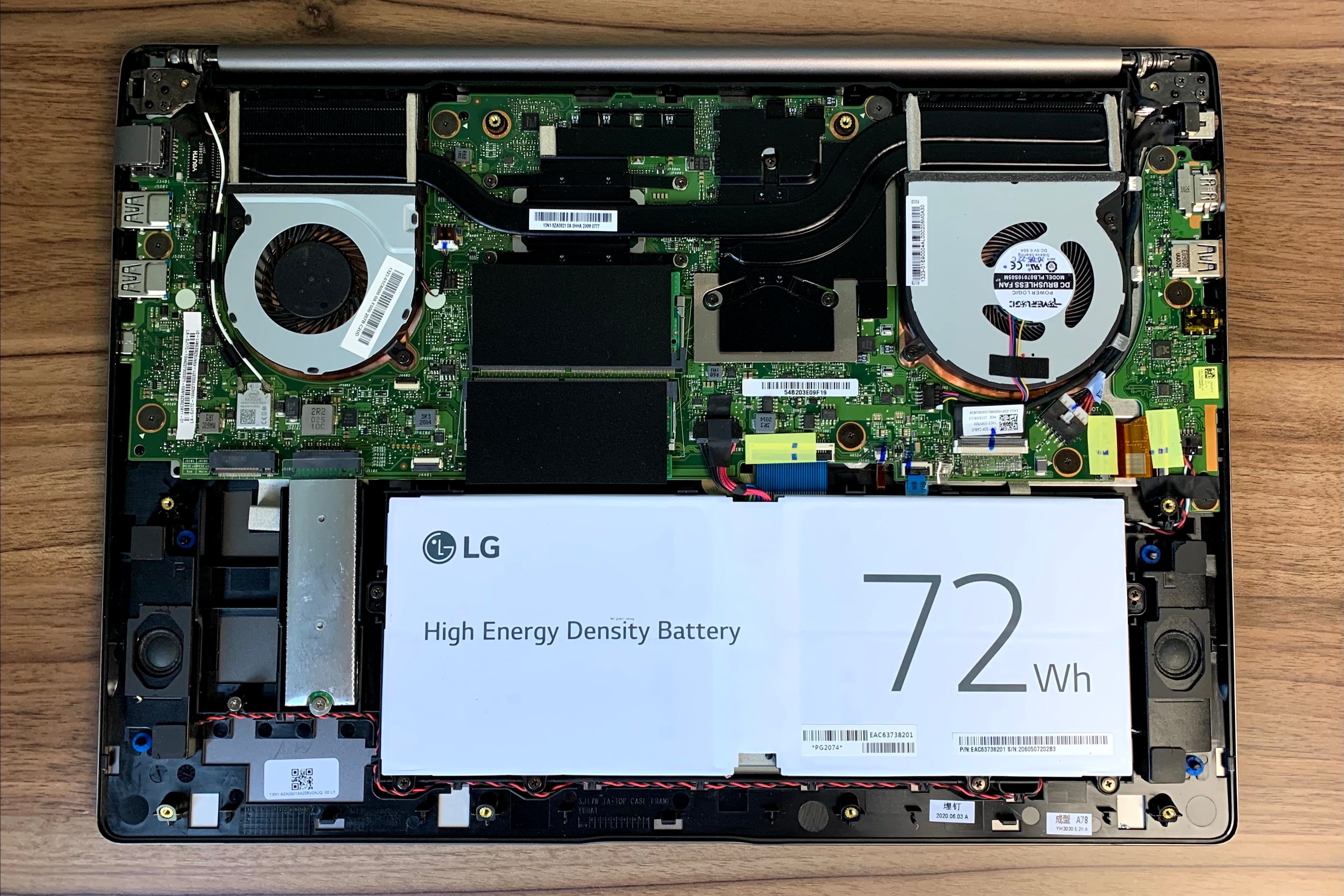 Like LG’s other Gram laptops, the Ultra PC 17’s aesthetic is unimpressive. The deep-gray finish—its sole color option—is on the drab side, there’s no edge-to-edge glass over the laptop’s display bezels, and the magnesium chassis feels somewhat cheap. Although the laptop’s bottom portion feels sturdy, the display lid flexes easily.

But those lightweight materials help the LG Ultra PC 17 hit that feathery 4.3 pounds. HP’s Envy 17, by comparison, weighs just over 6 pounds (with an inferior GPU), and Dell’s XPS 17 weighs 5.53 pounds in a configuration with a comparable GTX 1650 GPU. Despite its size, the Ultra is light enough to to use comfortably in long stretches on your lap. 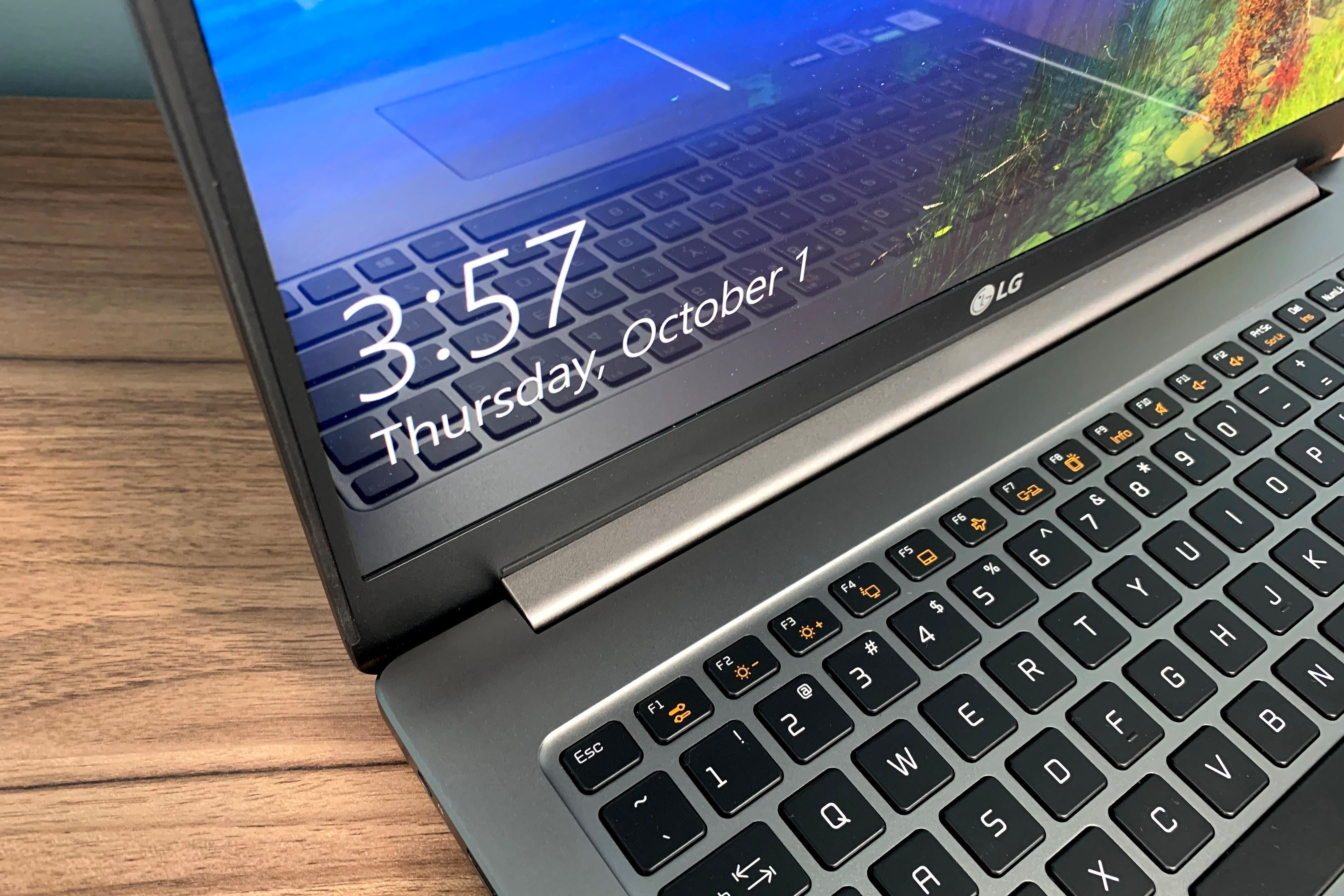 LG also deserves kudos for spurning 4K in favor of a 2560×1600 resolution display. Few laptop makers do this, because they’re drawn to 4K’s marketing power. LG recognizes that splitting the difference between 1080p and 4K yields vastly better battery life with hardly any discernible drop in sharpness. The Ultra PC 17’s display is crisp and bright, with a peak brightness of 500 nits. The 16:10 aspect ratio affords more vertical real estate than typical 16:9 displays for web browsing and document editing. LG’s Control Center software also has a handy display temperature slider to make the screen’s colors cooler or warmer.

The laptop does have one annoying design quirk: The left side has a power indicator light that blinks at odd intervals when the power is on. It’s not noticeable on a table, but the light can bounce off your leg when it’s on your lap and becomes extremely distracting. LG says there’s no way to turn it off. 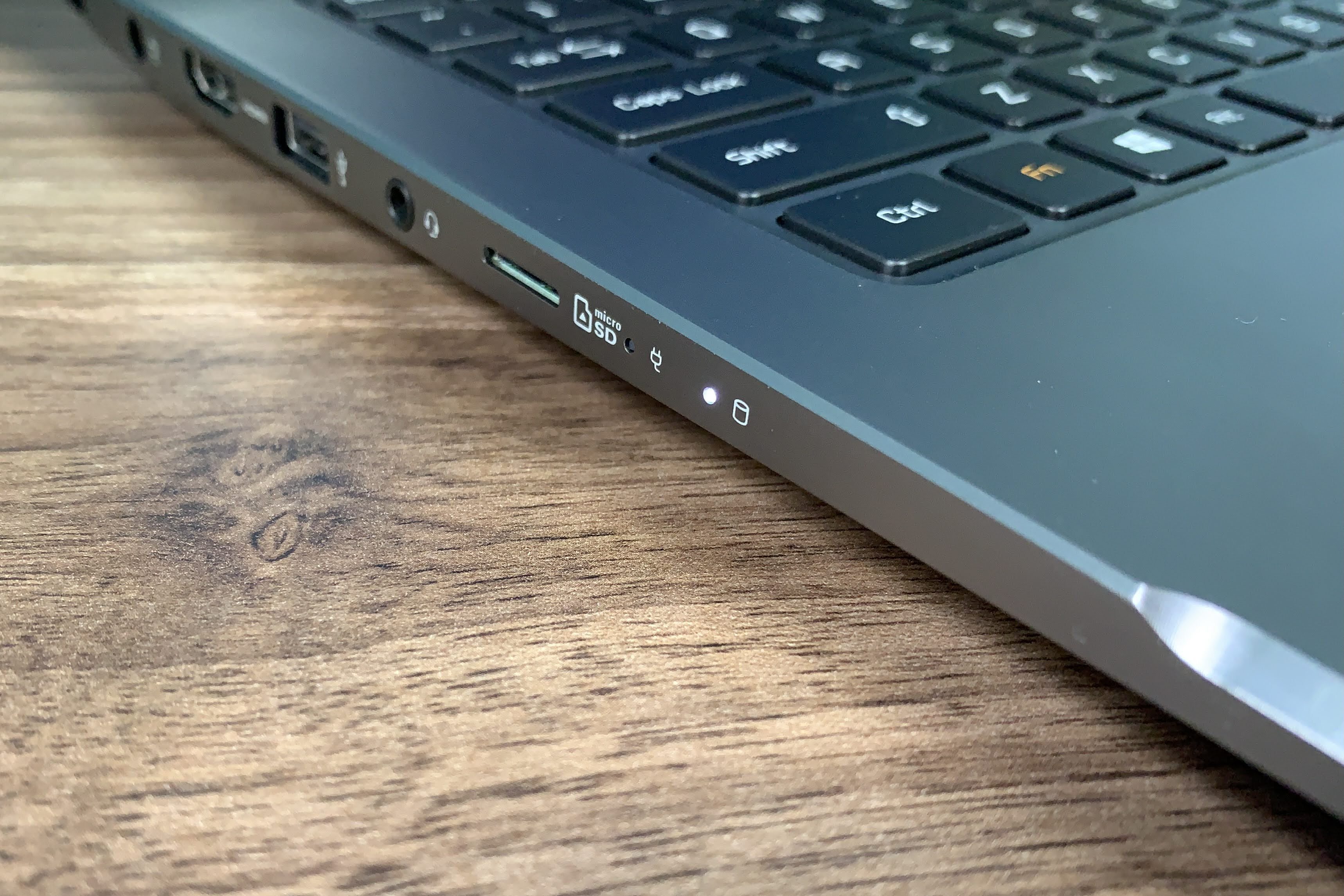 LG still doesn’t make the greatest laptop keyboards. There’s not a lot of travel on the Ultra PC 17’s keys, and they mush down a bit when you press them against the base of the laptop. Thankfully, LG has also made some layout improvements over its Gram 17 from 2019. The typing area is wider overall, and certain keys have been stretched out so they feel less cramped, including Backspace, left Ctrl, and the arrow keys. The result is a typing experience that’s decent, but decidedly less luxurious than that of other high-end laptops. 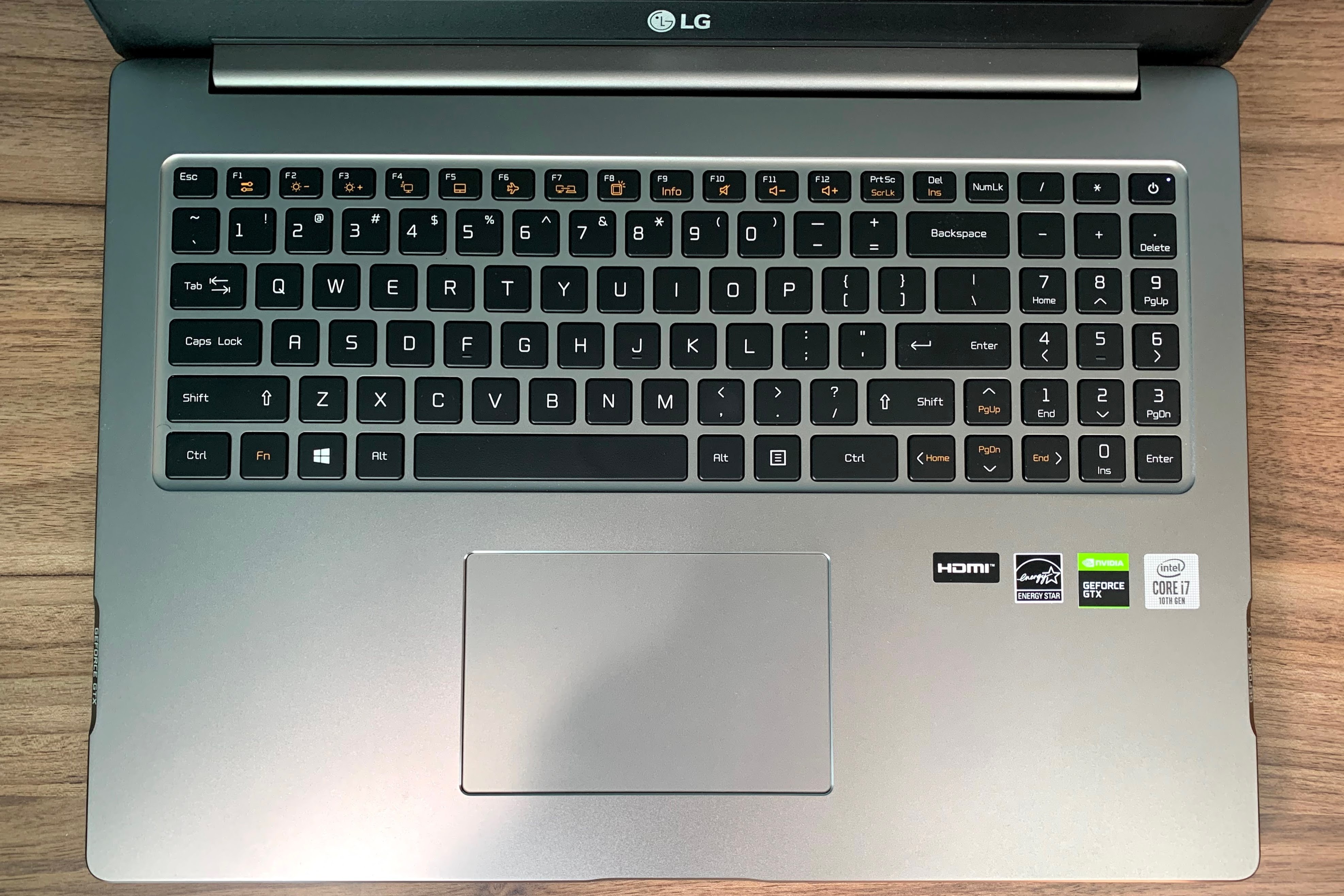 The trackpad sizing is generous as well, and it’s covered in smooth glass that never makes your fingers skip across the surface, even after prolonged use. It uses Microsoft’s Precision Touchpad drivers, which provide great palm rejection and support gestures such as pinch-to-zoom and three-finger swipes for app switching. Like a lot of other Windows laptops, the trackpad on this one still feels pretty stiff, though.

If there’s one area where LG clearly skimped, it’s on the security front. Unlike practically every $1,000-and-up laptop we’ve reviewed lately, the Ultra PC 17 has neither a fingerprint reader nor an iris scanner, so you’ll have to log in with a PIN.

LG has also ignored the hot new trend of privacy shutters for laptop webcams. (Like the blinking light on the laptop’s side, it’s another problem that might have to be solved with electrical tape.) There’s no hardware mute key for the microphone, either.

Audio is a bit of a letdown as well, with just two dinky 1.5W speakers on the laptop’s underside. The result is audio that sounds muffled and doesn’t get particularly loud, so you’ll need some headphones to get immersed in gaming sessions.

When it comes to performance benchmarks, the LG Ultra PC 17 is a bit disappointing. We’ve seen better gaming and multi-threaded processor performance from systems with similar specs. Still, LG’s laptop is a clear cut above integrated graphics and feels adequate for everyday productivity, plus its battery life is excellent.

PCMark’s Work 8 benchmark, which simulates a suite of office tasks, is a fine example of the Ultra’s productivity chops. Here, it actually edged out several laptops with 10th-generation Intel Core i7 CPUs. 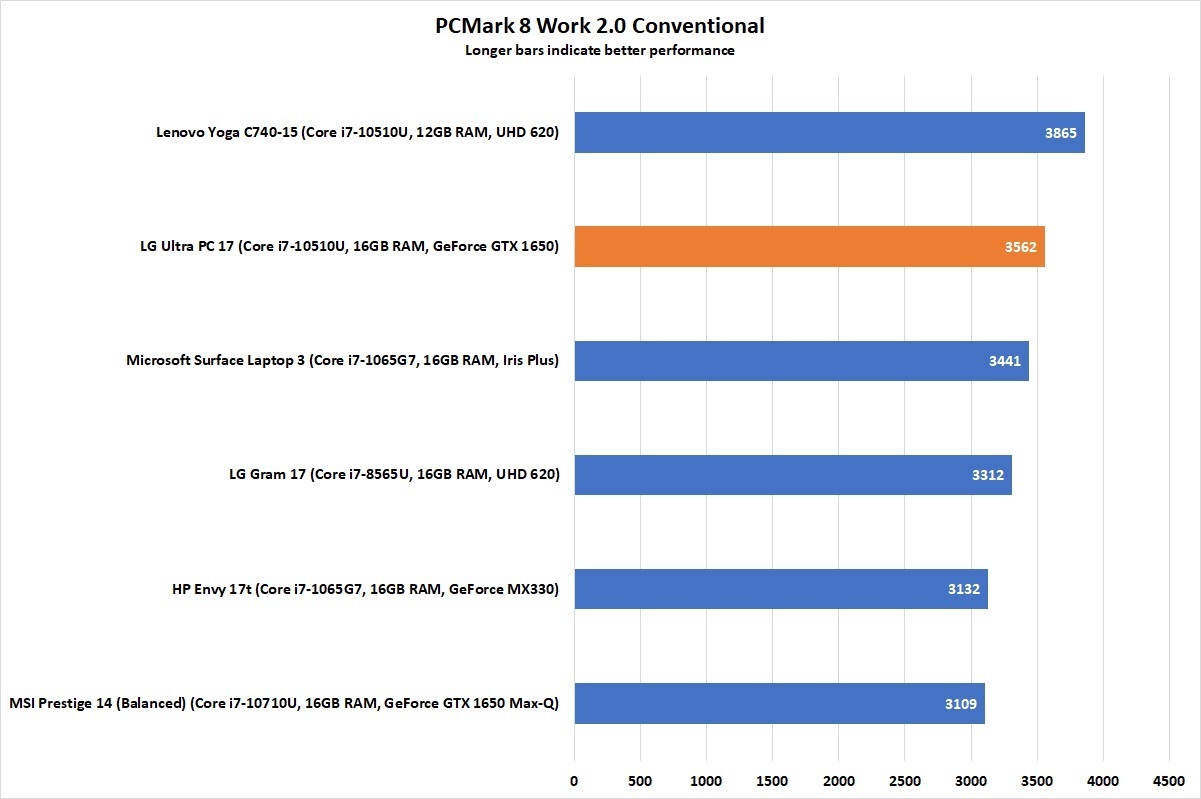 In Cinebench, you can see where the LG Ultra PC 17 starts to falter. While it excelled at single-threaded performance—the kind that comes in handy for document editing and basic web browsing—it falls well short of some other laptops with Core i7 CPUs in multi-threaded performance. 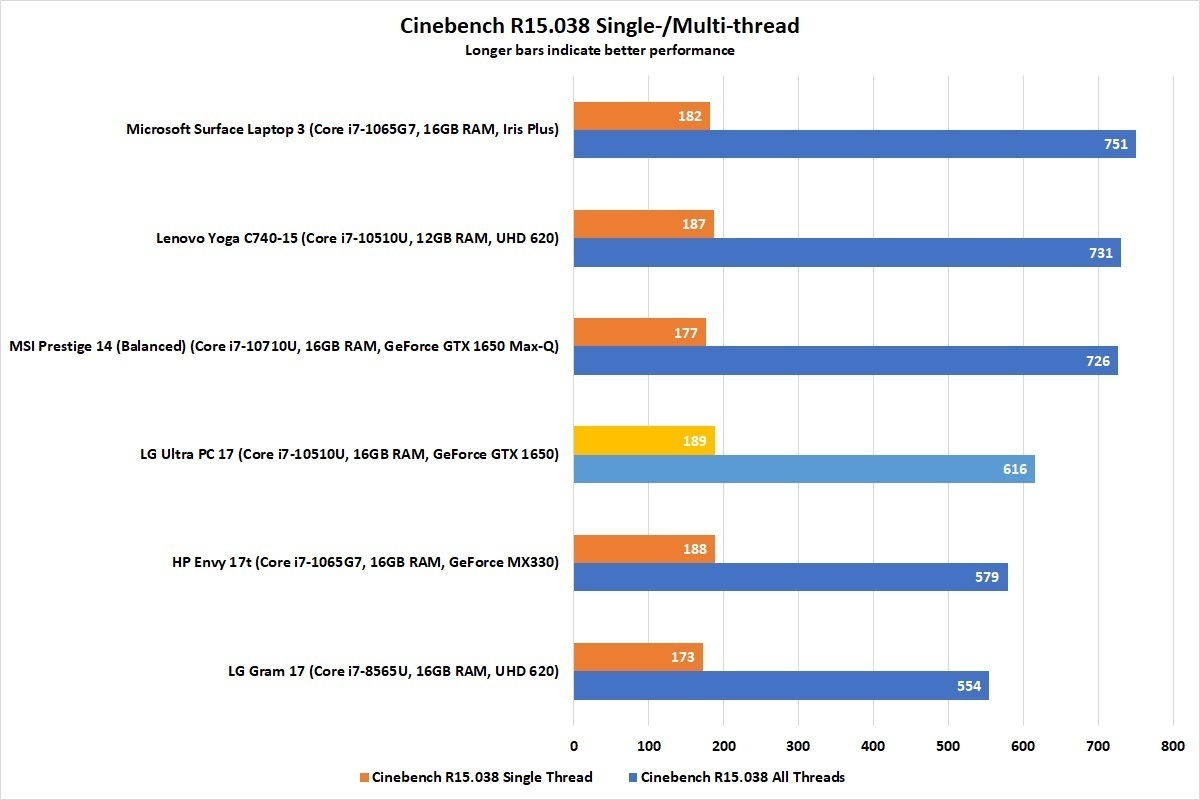 For a real-world example of the multi-threaded performance gap, let’s look to our HandBrake test, which involves encoding a large video file. The LG Ultra PC 17 got the job done in about 59 minutes and 44 seconds, far slower than several other laptops with comparable CPUs. 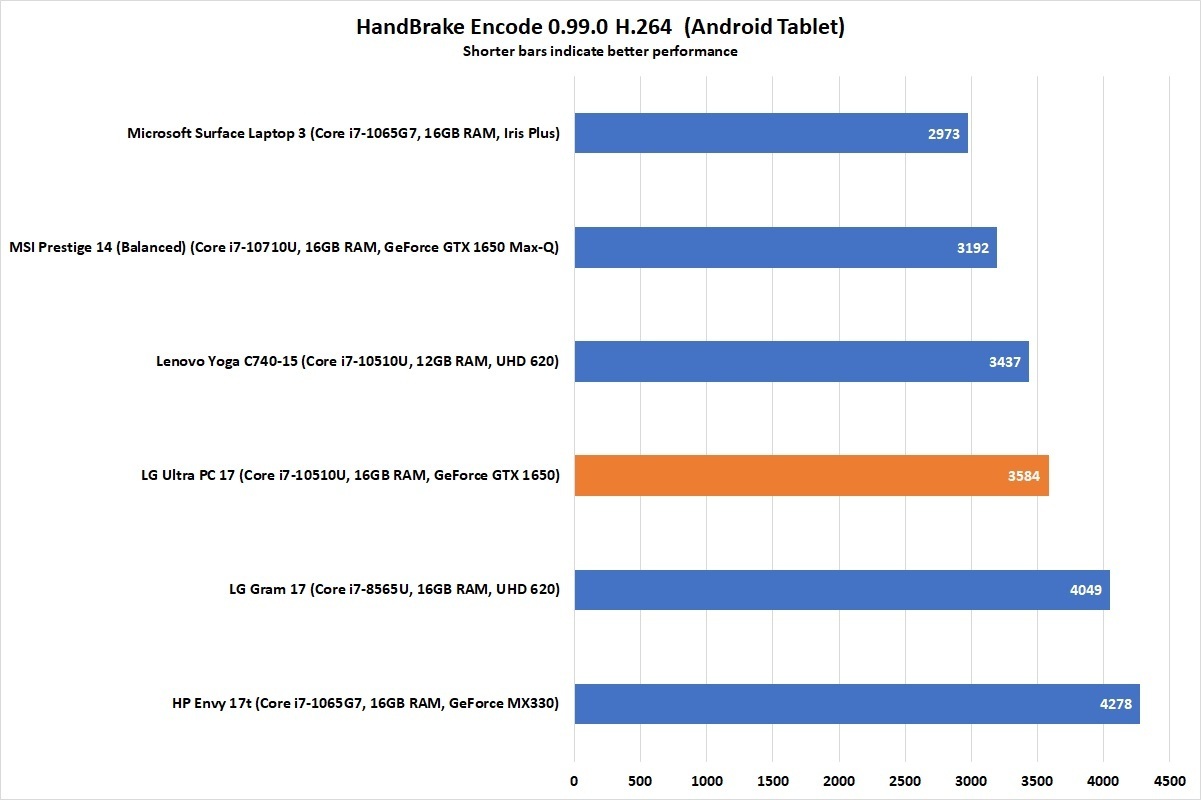 HandBrake imposes a heavy load on the CPU, which inevitably leads to heat. In the course of our testing, we noticed the laptop’s keyboard becomes quite warm under heavy loads, and the area just above the keyboard becomes hot to the touch. At the same time, the system’s fan doesn’t seem overly loud or powerful, and the only noticeable air vents are underneath the laptop. It’s likely that LG is throttling the CPU to keep temperatures under control.

The same might also be true with the GPU, given that 3D Mark’s Sky Diver benchmarks are far below what we’ve seen in some other laptops with Nvidia GeForce GTX 1650 graphics. The LG Ultra PC 17 scored 12,045 in this test, versus a score of 17,406 for MSI’s Prestige 14, which carries the Max-Q version of the GTX 1650. 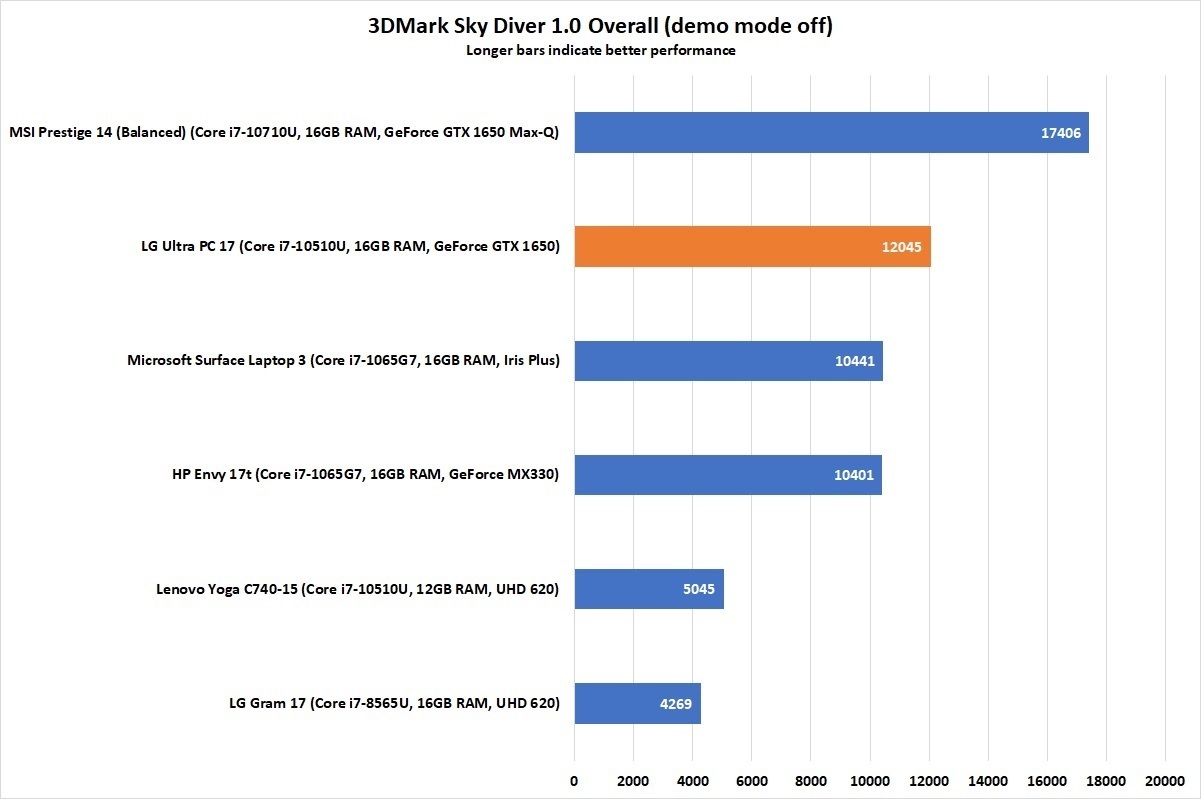 In practice, you’ll still be able to enjoy 1080p resolution and 60 frames per second in a wide range of games, but in some cases you’ll have to dial back graphics settings to keep the game running smoothly.

The LG Ultra PC 17 redeems itself somewhat with battery life. In our rundown test, which involves looping a video file while offline, LG’s laptop lasted for 12 hours and 18 minutes. Of course, battery life can vary a lot by use case—you’ll get closer to an hour playing games off the charger—but anecdotally the Ultra had no problems getting through a full eight-hour workday. That’s stellar. 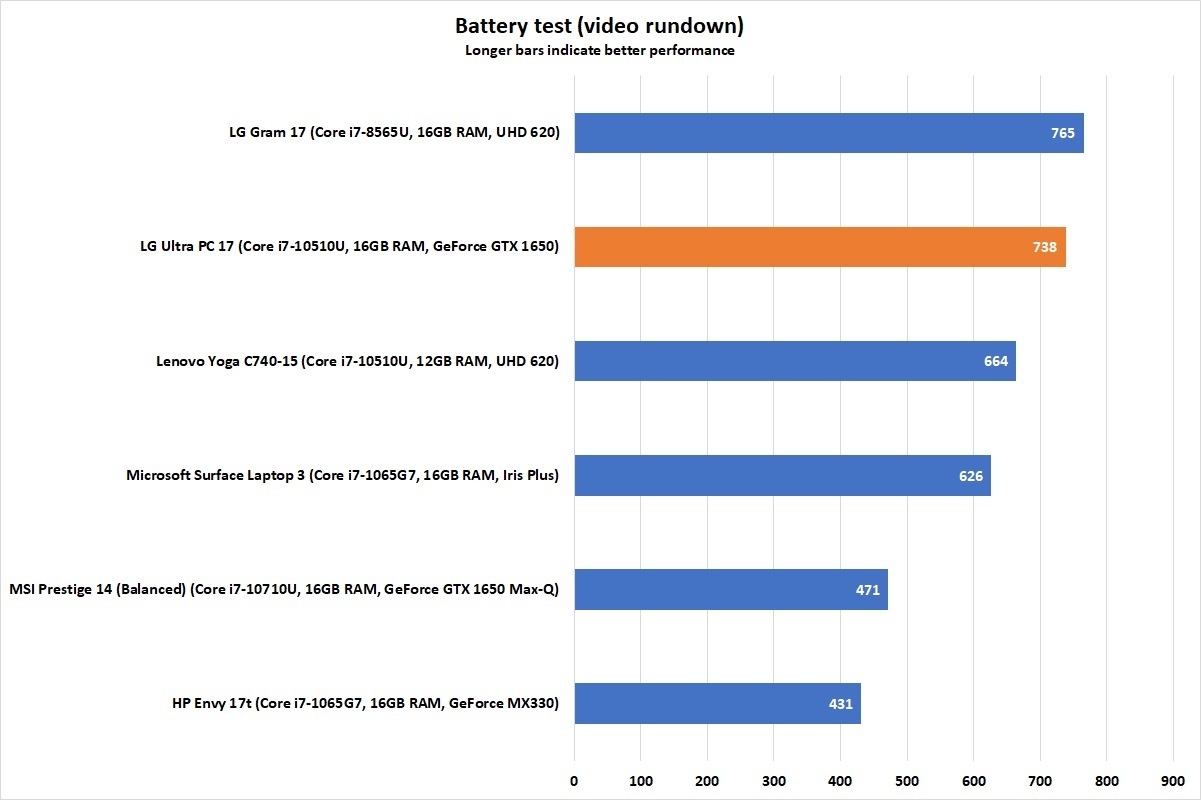 The LG Ultra PC 17 is ultimately a mainstream laptop that’s living large. While it lacks some fancy features like fingerprint reading, and performance isn’t ideal for heavy-duty media editing, the roomy display is convenient for work and loads of fun for play. You can use it all day off the charger without worrying about battery life, and it even has some replaceable or upgradeable components.

It seems like the kind of laptop that could bring 17-inch screens to the mainstream—if only more folks paid attention to what LG is doing.

The LG Ultra PC 17 isn’t the fanciest looking laptop, but it’s a great jack of all trades.