Humax Aura review: The one TV box that does it all?

It’s the best Freeview Play and streaming box yet, but the Humax Aura still needs work

Between smart TVs, streaming sticks, games consoles, set-top-boxes and recorders, we’ve never had so many ways to watch TV. Yet, curiously, there’s still one thing we’ve been missing: a single box that can do it all. Sure, we have smart TVs with built-in streaming apps and USB recording features, but these often lack basic features like the ability to record two programmes at once. And while we also have Freeview Play and YouView set-top-boxes and recorders with catch-up TV features, they are typically hampered by clumsy user interfaces or spotty app support.

The Humax Aura is something different: a Freeview Play box with proper streaming and smart TV features, built around Google’s Android TV OS. It promises a full-fat 4K streaming experience along with the best of Freeview Play, in a modern-looking compact unit with a slick and flexible UI. It even includes one of the killer features of Amazon and Google streamers: built-in voice control. If you’re still bothered about broadcast TV, this could be the device you’re looking for.

Humax Aura: What you need to know

The Aura costs £249 for the 1TB model and £279 for the 2TB version, which makes it a little more expensive than its closest rival, the Manhattan T3-R (currently £197 for the 1TB model). However, the T3-R is more of a Freeview Play box with added streaming features, so the comparison isn’t really fair.

If you’re not so fussed about recording, both the Manhattan T3 and Netgem Netbox 4K are excellent Freeview Play set-top boxes with limited streaming capabilities, and the latter can record to a USB memory stick. The T3 is available for around £80, while the Netbox 4K is around £130.

The Aura looks and feels like an evolution of Humax’s recent Freeview Play and Freesat set-top-boxes, building on the compact design and rounded corners of the FVP-500T and HDR-11100S. It’s a low, flat box measuring 258 x 240 x 40mm (WDH), with a glossy arched top and a tight mesh grille that wraps around the front and sides. It’s fairly free of decoration except for a glowing bar on the front and some basic controls on the top, in the front-right corner.

All the connections are at the back, including an aerial input and passthrough, HDMI 2.1 and optical audio outs, two USB ports and an Ethernet jack. It’s likely that most users will ignore the last in favour of the built-in 802.11ac Wi-Fi. There’s also Bluetooth 4.2 connectivity – always handy for a set of Bluetooth headphones – and the USB ports enable you to expand the built-in storage by plugging in an external USB drive. 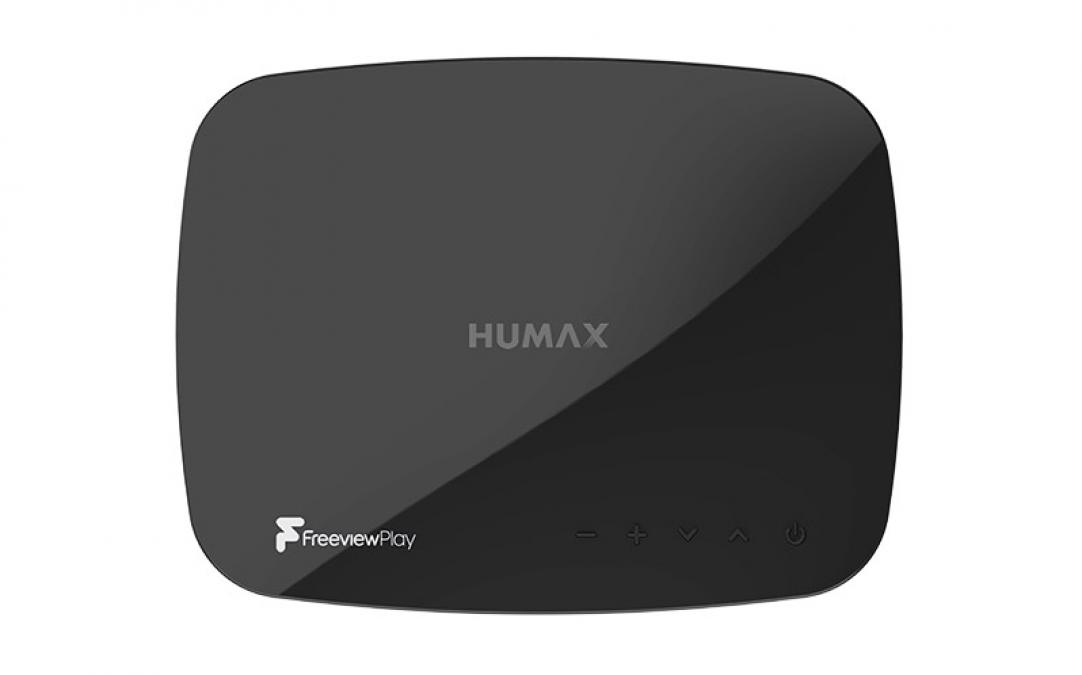 Humax knows what it’s doing with remotes; the Aura’s remote is a long, lightweight effort with standard controls that connects with the box via Bluetooth. The Google Assistant button sits in the top-left corner, and there’s a nice chunky cursor pad, volume and channel rockers plus dedicated buttons for Amazon Prime Video, the Apps menu, Freeview Pay and Live TV.

If you already have a Google account, the setup process couldn’t be much easier. You can pair your remote and sign in during the initial start-up, then log on to your network and let Google carry over your preferences and apps. You’ll probably want to whittle down the selection to ditch any games or apps best suited to a smartphone. After that, it’s just a question of scanning for your Freeview and radio channels, then you’re pretty much done. All I needed to do after setup was edit the channel list, pair my Bluetooth headphones and download a few additional apps – including Disney Plus – from the Google Play Store. 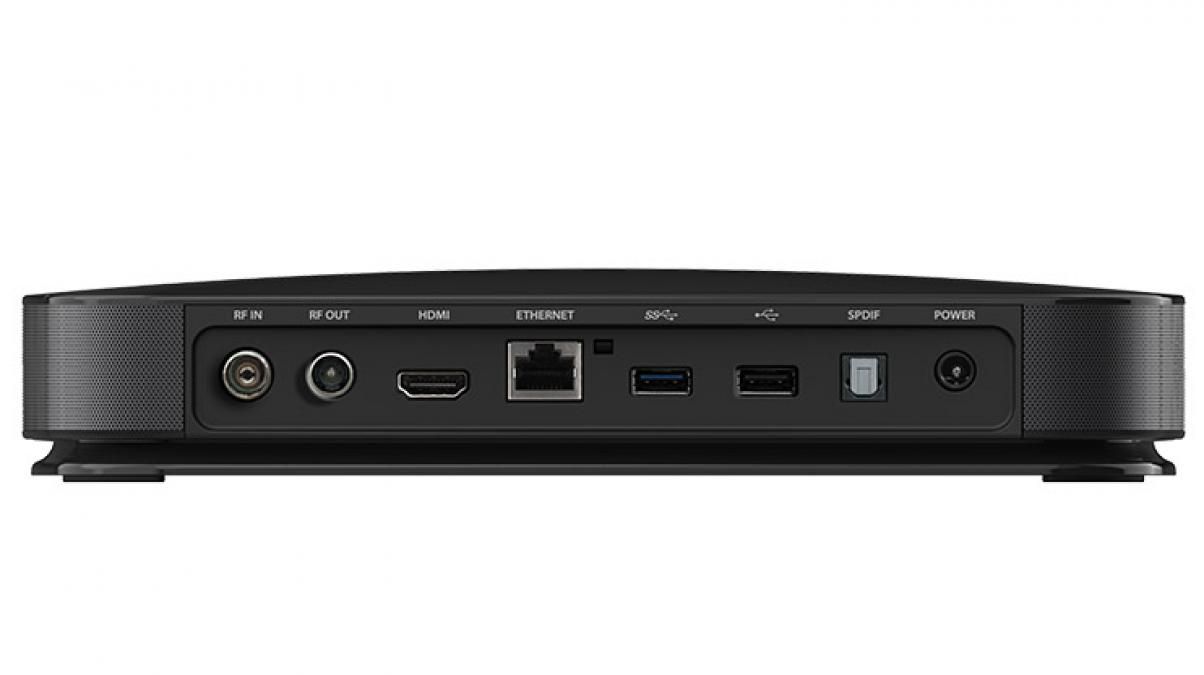 Now, this isn’t Google’s new all-singing, all-dancing Google TV UI, as seen on the new Chromecast with Google TV, but a variant of what you might have seen on some existing Android TVs, based on Android TV 9.0 but with a Freeview Play flavour. All your apps and your recently viewed films and programmes are available from a central home screen, where you’ll also see a wide range of recommended streaming content.

Hit the Freeview Play area, and you’ll see your recent programmes and recordings along with live and upcoming programmes, plus even more recommendations on what you can watch – either live or on catch-up – or set to record. Beyond that, there’s also a more traditional seven-day EPG, featuring the old Freeview Play trick that lets you skip back to either watch shows from the beginning or catch-up with programmes you’ve missed.

It’s all easy and logical, hitting a good balance between the approach we’re used to from major streaming services and the more traditional TV guide experience. Recording single programmes or an entire series is easy and the software handles conflicts well, allowing you to select an alternative showing or cancel an already scheduled recording. Viewed just as a Freeview Play recorder, the Aura is a real success. 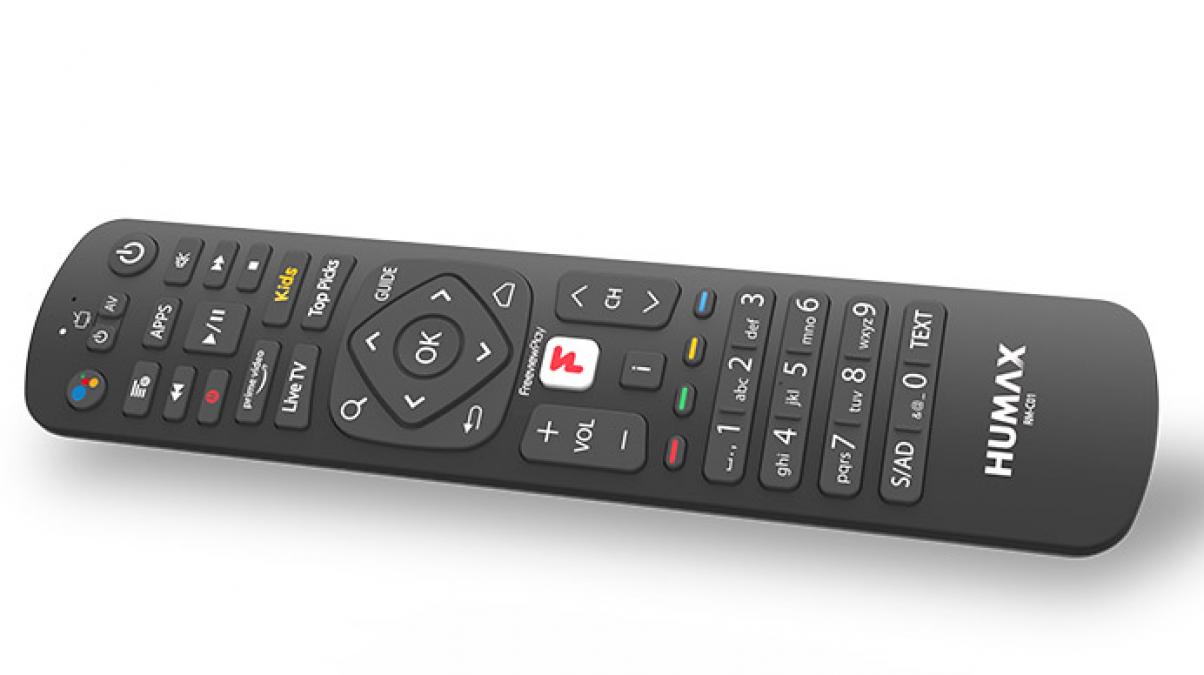 It’s not quite as ideal, however, when it comes to streaming and the big issue – as always – is app support. It’s fine with Amazon Prime Video, YouTube, Google Play Movies & TV and all the major UK catch-up services. Here, everything works just like you might expect.

Unfortunately, red flags started flying when Netflix wasn’t preinstalled and were only raised when the Google Play store announced that the Netflix app wasn’t supported on this particular device. The Now TV app would install, but on launch sent up an error message saying that the service wasn’t available through this device. You can just about get away with not supporting one of these services. Missing both is a big mistake.

In theory, there is a workaround: you can use the Aura’s Chromecast features to stream content using the relevant app via a phone or tablet. Unfortunately, while this worked with Amazon Prime Video, Now TV and Disney Plus from my Samsung Galaxy A71, Netflix would not play ball. The same applied with a second Android phone. Of course, if you have a smart TV with Netflix or Now TV support you can always just switch over from the Humax to your TV’s UI to access them that way.

One of the Aura’s biggest selling points is its Google Assistant integration. Press the Assistant button at the top left of the remote and the box is yours to command. The only problem here is a lack of consistency.

Predictably, it works brilliantly for YouTube and Google Play Movies & TV, where you can search for a specific programme, movie or actor and be sure of getting relevant results. Sadly, it’s not so good on Amazon Prime Video, All4 or BBC iPlayer, where you’ll be met with a message that the app isn’t installed or can’t be searched.

It’s also quite frustrating with Freeview Play, where the search will find you shows that are available on-demand but not upcoming broadcast programmes. What’s more, some of the most obvious commands are missing. If you dream of being able to say ‘Find Roadkill’ or ‘Record Match of the Day’ then you’re going to be disappointed. 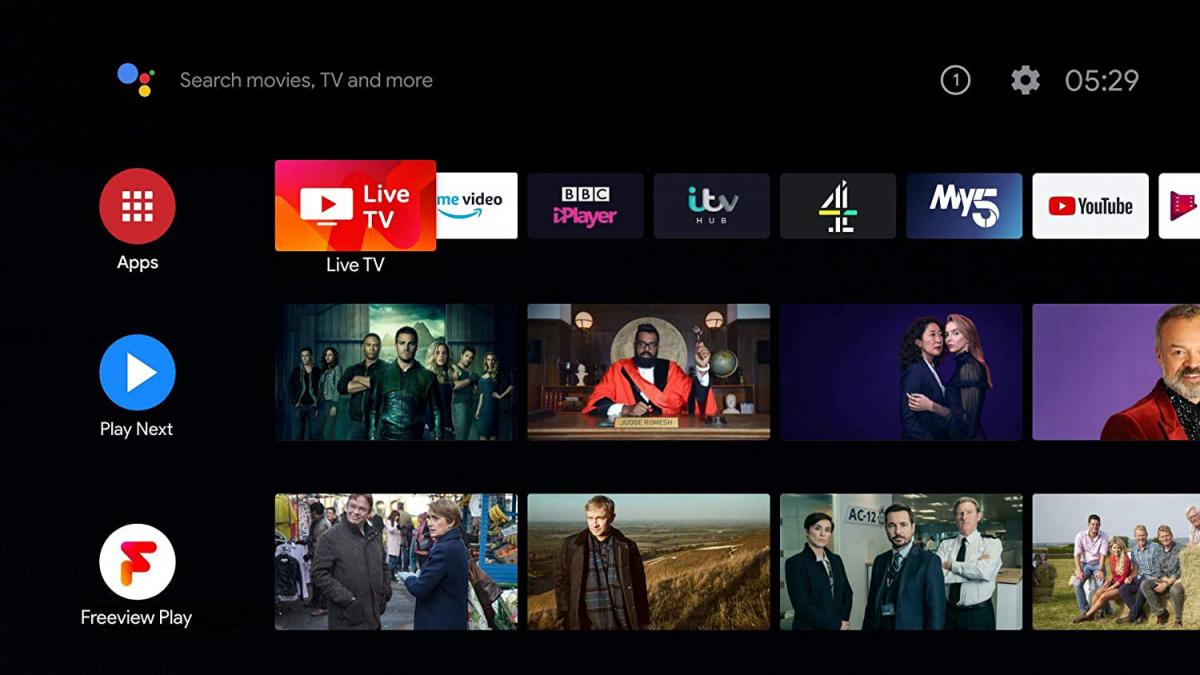 It’s still great as a general smart tool, mind you. You can use it to view the weather forecast, look up facts and control any smart home devices that you’ve already integrated through Google Home. But when it comes to the core TV control stuff, the Aura is playing catch-up to the Chromecast with Google TV and it’s even further behind Amazon’s Fire TV devices.

This is a shame because the Aura’s audio-video performance is impressive. While Freeview Play sources are limited to 1080p and SDR, 4K HDR content on Amazon Prime and Disney Plus looks fantastic, with plenty of detail and lovely rich colours. There’s HLG support for future 4K HDR broadcasts, and also Dolby Atmos and DTS-X passthrough for an AV receiver or soundbar. If you’ve got a decent AV setup, the Aura won’t be the weakest link.

Just as importantly, the Aura feels fast in operation. It’s based around a quad-core 1.8GHz ARM Cortex A-53 processor with 3GB of RAM, and it’s as quick at launching apps and streaming video as recent Amazon devices – and noticeably slicker than its set-top-box competitors.

This is so nearly the single box that does it all. It’s a great Freeview Play recorder and comes awfully close to a brilliant 4K HDR streamer. However, the lack of Netflix and Now TV support is hard to overlook, and while the UI is generally easy-to-use and polished, the Google Assistant integration isn’t quite where it needs to be. Add in those missing apps along with some solid software updates and the Humax Aura could be a real contender. Right now, it needs just a little more work. 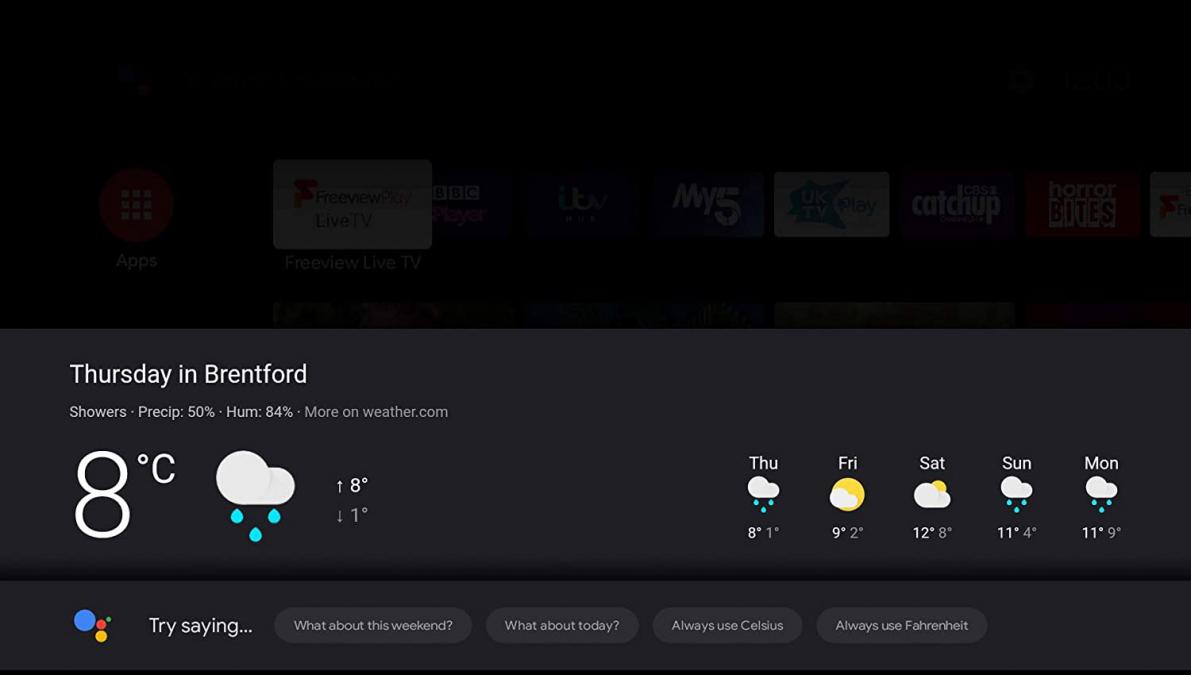 Don't miss a deal at Intuit Small Business
Best offers at Sky
Discounts, Sales and Deals at Adobe
Save your money with Ticketmaster UK
Online-Shopping with House of Fraser
Best products at Vodafone UK
Latest Posts