It hasn’t been making laptops for long, but Huawei’s MateBook X Pro is already right up there with the best ultraportables you can lay your hands on. The MateBook X Pro (2020) is the latest model, comes with upgraded internal hardware over last year’s laptop and it remains a fine choice, especially as, unlike the company’s smartphones, the laptop division has avoided being slapped with a ban on using its core software – Windows 10.

As with previous versions, the 2020 MateBook X Pro has a fabulous 3:2 aspect-ratio 14in display, it’s slim and light and has one of the nicest keyboards we’ve used on any laptop. It’s nearly as good as the keyboard on the Google Pixelbook Go.

In fact, physically, the MateBook X Pro hasn’t changed one jot. It’s inside where all of the changes have been made, with Huawei introducing new tenth-generation Intel processors for improved performance and (in theory) better battery life, too.

The Huawei MateBook X Pro (2020) isn’t quite available to buy yet but we do know how much it’s going to cost. There will be three models available, all detailed in the list below:

If you can’t wait until April, here’s a list of our favourite alternatives, how much they cost and where you can buy them:

There’s nothing new about the design of the MateBook X Pro (2020) but it’s worth reiterating how good it is from this perspective. First up, it’s very slim and lightweight, measuring 14.6mm thick when closed and weighing a feather-light 1.3kg.

I’ve used the original MateBook X Pro on and off for a couple of years now, and it’s always proved a reliable companion on my travels. I particularly like the softly rounded edges, which means it’s simple to slide into laptop pockets in most bags without catching the fabric lining.

Around the sides, you’ll also find a more substantial selection of ports than you might expect from such a slimline machine. There’s a single, full-sized USB 3.0 USB-A socket on the right, which comes in super handy for connecting legacy USB thumb drives and wireless dongles. On the left edge is a pair of USB-C ports, both of which support data, charging and video output and there’s also a 3.5mm headset jack next to these.

Lift open the lid – a single finger operation, thankfully – and you’re faced with a spacious, well-laid out backlit Scrabble-tile keyboard with a large two-row-high Enter key and nice big shift and cursor keys as well. The key action is wondrously luxurious, too, with a lovely dig of feedback and plenty of travel to each keystroke and a smooth, almost liquid feel. 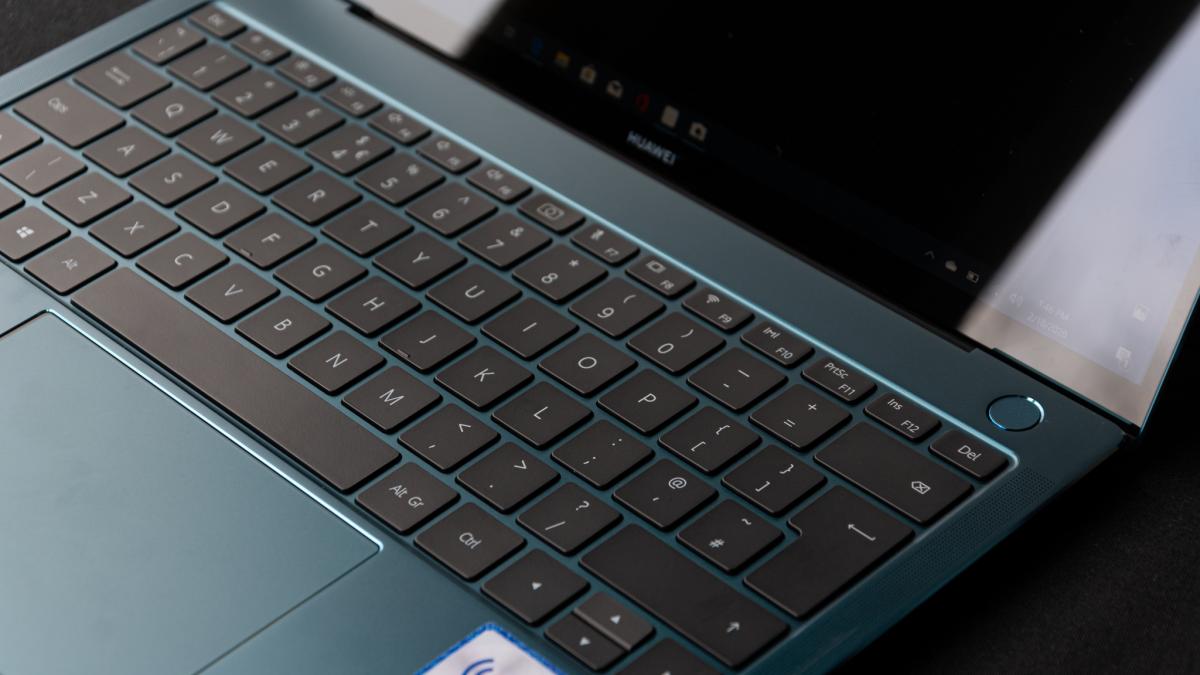 The keyboard is lovely and the large touchpad is just as good to use. Although there’s nothing as exotic as Apple’s haptic force-feedback technology in use here, the perfectly weighted mechanical click and smooth glass top go together to make a pointing device that’s a match for any you’ll find elsewhere.

Other than this, there are a couple of other features worth noting about the MateBook X Pro (2020). First is the circular power button that sits just above the keyboard on the right-hand side, which incorporates a fingerprint reader, for fast biometric login. The second – and the one feature I wish Huawei would change – is that the laptop’s 720p webcam remains integrated into a function key, between F6 and F7 on the top row of the keyboard. 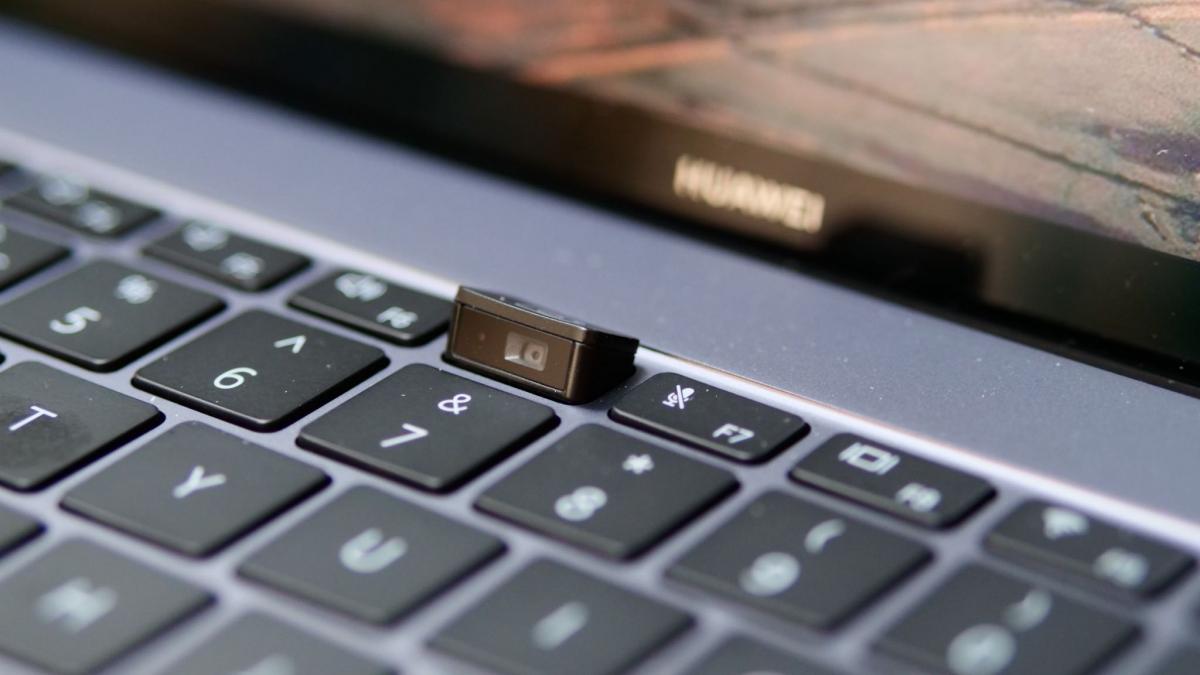 Video quality is okay but the angle is all wrong and you end up with your knuckles in the shot if you need to type while on a video call. It’s also not Windows Hello compatible.

The final feature worth pointing out is the MateBook X Pro (2020)’s NFC-driven Huawei Share tech. This works a little like Apple’s AirDrop wireless sharing except instead of an iPhone, you need a Huawei handset to make it work. Huawei sent over a P30 Pro to test out the feature and it worked well, allowing quick transfer of files back and forth without the need to faff around with pairing or connecting cables. Shame it doesn’t work with other Android phones, though.

The Huawei MateBook X Pro (2020) comes with a 14in LTPS IPS touch display with a resolution of 3,000 x 2,000 (260ppi) and a tallish aspect ratio of 3:2. This is the sort of shape that’s ideal for a work machine, giving you plenty of height so you can see more of a document or web page without scrolling.

The flip side is that, when it comes to watching movies or TV shows, the black bars at the top and bottom of the screen are a little taller than with a 16:9- or 16:10-ratio display, but that can be forgiven as this is a professional machine first and a media consumption device second. 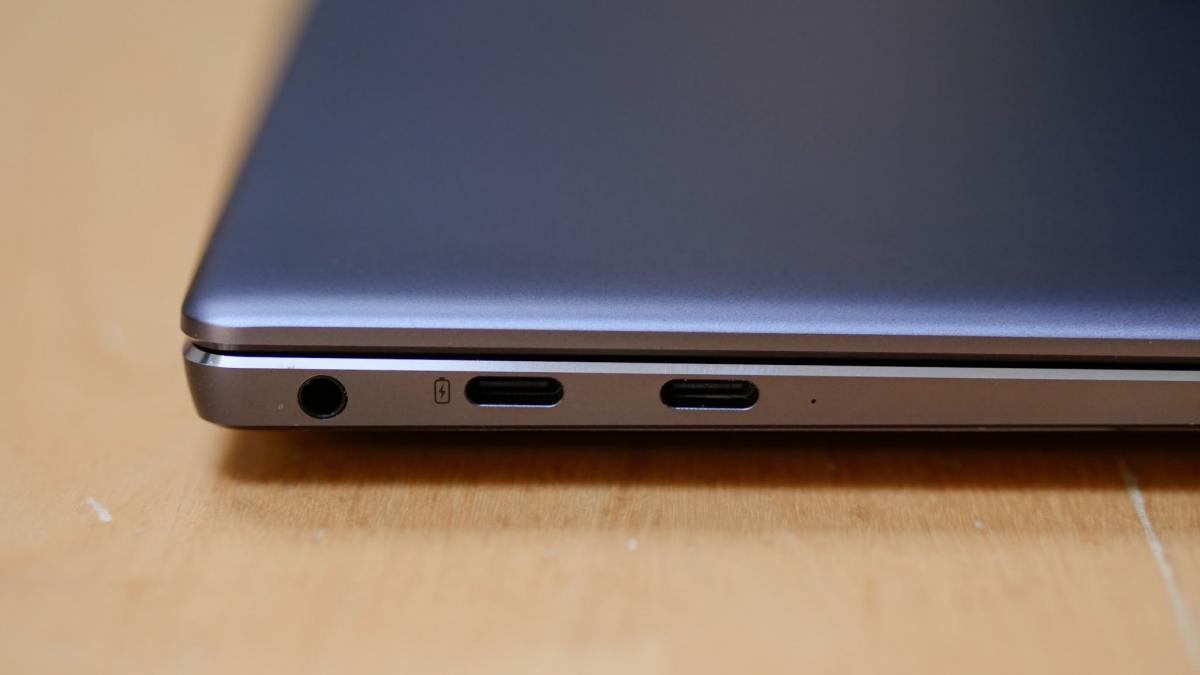 Having said that, it’s a display that works well for all content in terms of its overall quality because it performed brilliantly in our technical testing. Peak brightness is great at 533cd/m2, the contrast ratio is also very impressive at 1,579:1 and colour performance is exceptionally good.

With a colorimeter, I measured 96.2% coverage of the sRGB colour gamut and colour accuracy was near perfect. There’s nothing, aside perhaps from the glossy finish, that I’d change about this screen. It is stupendously good.

When you come to buy the MateBook X Pro you have the choice of a couple of different processors. The cheapest machine is the one that comes with a quad-core 1.6GHz Core i5-10210U chip; spend 500 Euros more (exact UK pricing is not yet available) and you can lay your hands on the model I was sent for testing, which comes with a quad-core 1.8GHz Intel Core i7-10510U.

All models come with 16GB of LPDDR3 RAM to back this up and large 512GB or 1TB PCIe SSDs. Not all models come with Nvidia GeForce MX250 discrete graphics, however – the most reasonably priced model makes do with only Intel UHD Graphics – but every model delivers enough power for even the most demanding mobile worker. 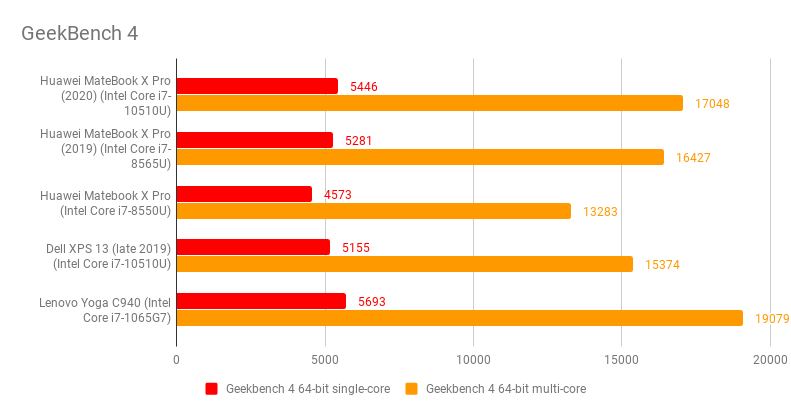 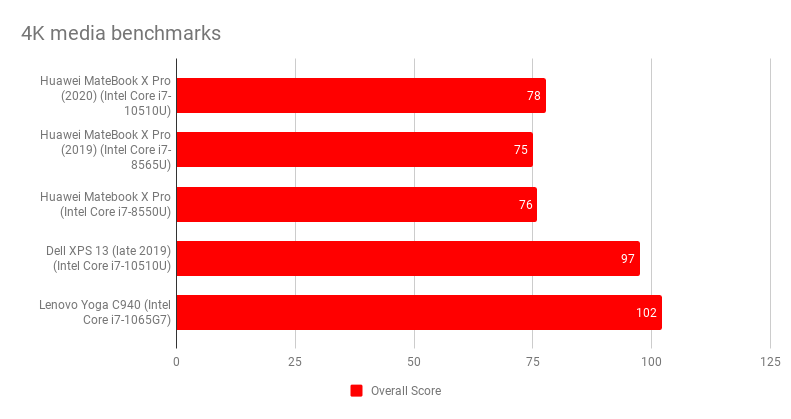 As you can see, there isn’t much in it for any of these tests, with the new MateBook X Pro (2020) performing slightly better than the older ones pretty much across the board – but not by much. You’ll notice that the Dell XPS 13 (2019) gets higher scores in our 4K media benchmarks – this is almost certainly because it has more efficient cooling. This benchmark is a long and demanding one and really sorts the men from the boys when it comes to efficient cooling.

Battery life, however, is slightly worrying. Despite the fact that it’s using a low-power Intel chip, the MateBook X Pro only lasted 7hrs 55mins in our video rundown test (with the screen set to a standard 170cd/m2 brightness and flight mode engaged). That’s worse than either of its predecessors and falls a long way behind the Lenovo Yoga C940.

I can only surmise that this particular generation of Core i7 CPU isn’t as efficient as previous models. It certainly doesn’t appear to be anything Huawei is doing wrong, since the recent Dell XPS 13 (late 2019) employs the same CPU and suffers the same fate. 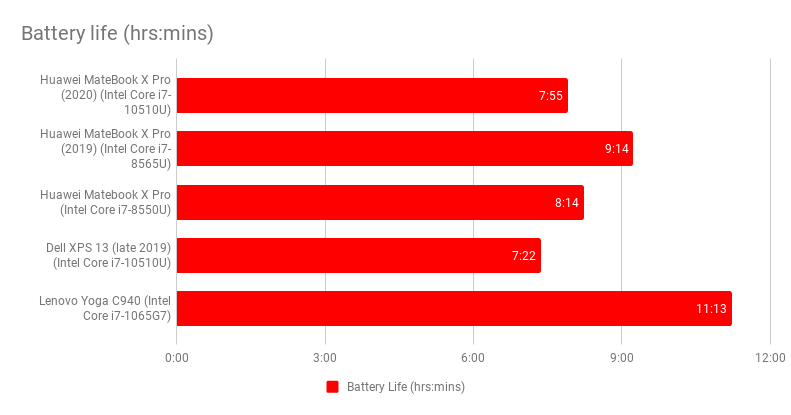 It’s a solid update but, alas, an unexciting one. Don’t get me wrong, the Huawei MateBook X Pro remains one of the finest ultraportables money can buy. It has an amazing display, very good all-round performance – including a modicum of gaming ability if you opt for either of the models with discrete graphics – and it’s a joy to use in general.

However, the lack of big changes and the fact that performance hasn’t moved on a great deal means that I’m having a hard time recommending this 2020 model. That’s especially in the light of the prices, which start at a relatively high €1,499 for the base Core i5 model and rise to €1,999 for the Core i7 with discrete graphics.

Therefore, although there’s very little wrong with the Huawei MateBook X Pro, I’m going to have to recommend you cast your gaze elsewhere. Both the Dell XPS 13 and, in particular, Lenovo Yoga C940 (14in) present more affordable and generally better performing choices.

Don't miss a deal at Ancestry
Best offers at Vodafone UK
Discounts, Sales and Deals at Marks and Spencer
Save your money with Newegg
Online-Shopping with Argos
Best products at Sephora
Latest Posts