What kind of gaming computer is the HP Omen Desktop PC? Some gaming PCs are just better than others. Some are souped-up, but expensive gaming behemoths while others will just get you in the door and are much more affordable. Somewhere in the middle sits the HP Omen.

In fact, it’s a relatively affordable machine, at least in terms of gaming PCs, that also is powerful and leaves plenty of room for future expansion. Is it actually cheap? Now, our review model came in at $2,300. However, it will give you good performance for a lot less than a lot of other options. The HP Omen Desktop PC’s design could use an upgrade, but it’s definitely a great value considering what you’re getting under the hood.

While many gaming PCs of its caliber will cost you an arm and a leg, the HP Omen Desktop PC boasts a reasonable price tag. It has several different configurations available, but since HP only has two i7 8th generation and one i7 9th generation processors on hand, you’re guaranteed a powerful machine no matter what you choose.

The cheapest of the configurations is the base model that comes in at $1,369 at the time of this review and with the i7-8700 processor, an 8GB RAM, a 1TB hard drive, and the Nvidia GeForce GTX 1050 graphics card, as well as a keyboard and mouse (which we didn’t get to test during the review).

Even though our model’s GPU (GeForce GTX 1080 Ti 11GB) was available at the time of the actual review, that was no longer the case at the time of writing. This graphics card, as well as the 512GB SSD plus 1TB HDD combo, are no longer available on the HP website. The closest configuration we could put together is one with the same CPU and RAM, but with a 512GB SSD plus 2TB HDD and a GeForce GTX 1080 8G, which will set you back around the same price, if only slightly expensive, at $2,335.

Furthermore, our exact HP Omen Desktop PC configuration isn’t available in the UK and Australia. Similar configurations may be found, however. 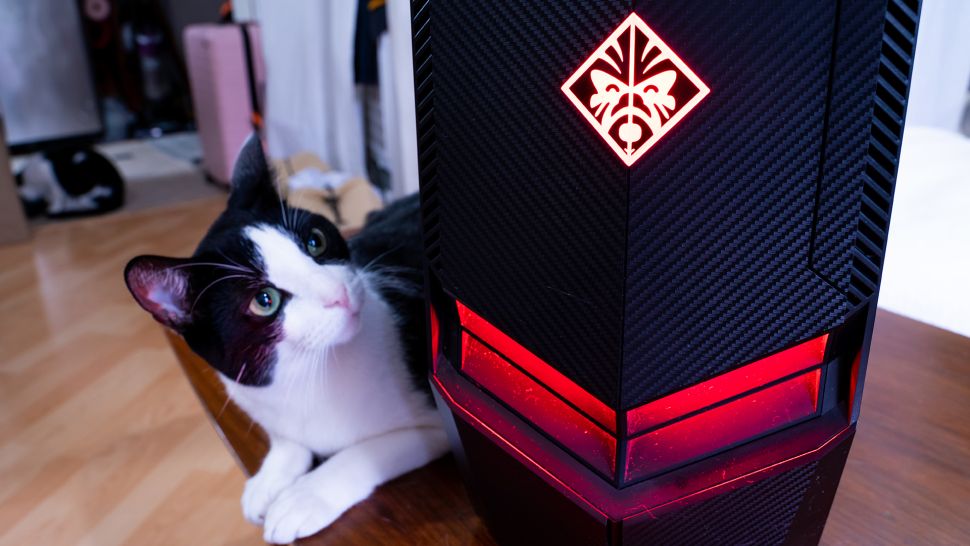 Many folks have commented on the HP Omen Desktop PC’s not-so-appealing design, and we must admit, it isn’t the most attractive looking gaming PC on the market. In fact, its gamer’s look kind of reminds us of a flattened head of a Deception, especially with its red RGB lighting.

It has a subtly textured casing with a rigid facia, the word OMEN etched on its top left-hand side, and the logo wedged front and center blazing red. The red lighting on the black chassis looks aggressive as if you’re going into combat every time you use it. This might be appropriate especially if you’re playing a lot of FPS games, but it doesn’t necessarily appeal to most consumers.

Inside, it isn’t the most attractive either, but seeing as the gaming PC doesn’t have a clear case, the inside isn’t really meant to be seen this isn’t such a big deal. Unlike most powerful gaming PCs, this one isn’t that huge, and will still take up a decent amount of desk space.

Attractiveness and size aside, what we do appreciate about this gaming PC’s design is its accessibility and upgradability, which are obviously far more important. It has been designed so that you can easily access what you need, whether it’s the ports or the inside components you need, and you can easily upgrade or add to those components, and they’ve clearly succeeded in that regard. 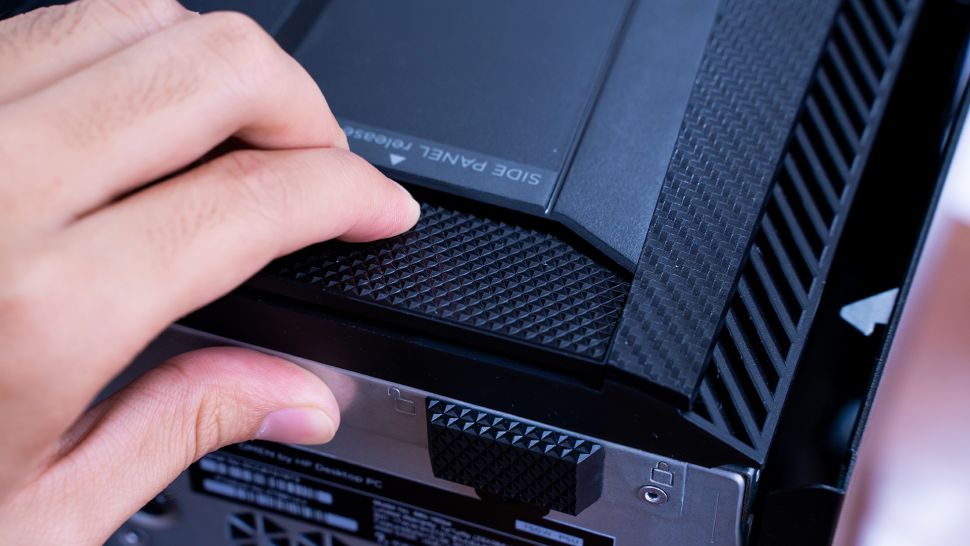 Thanks to its tool-less design, you can easily access the interior to add more hard drives with very minimal effort. There’s just a large switch in the back to lock and unlock the side panel, and an even larger button above that that you can easily push to pop it open. Additionally, the top front has a hidden compartment that pops open to reveal two HD bays. These bays are easily removable by pulling their red tabs, allowing you to add, remove, and replace extra hard drives, they also lock in place with a switch.

Besides those, there’s also a DVD-RW drive next to the logo in the front on the right-hand side that blends well with the design. You can also easily pop it out by pressing on the cover.

Finally, the HP Omen Desktop PC also has a diverse number of available ports, both in the front on the top, right-hand side and in the back, giving you several options to connect your different devices. It even has an SD card slot up front, which is handy for photographers and videographers. 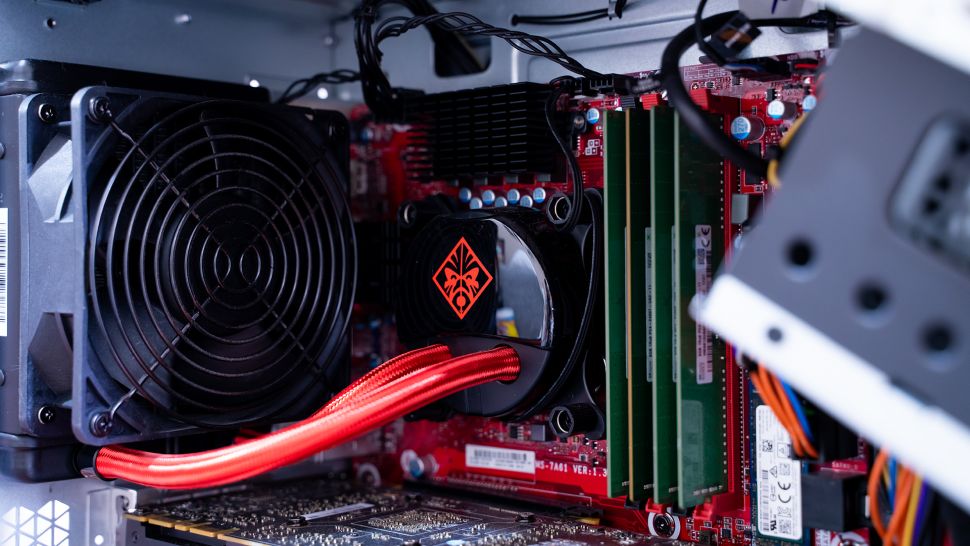 The HP Omen Desktop PC future-proofing not only stems from its power, but its upgradability as well. It has three additional bays for extra hard drives, two of which can be easily accessed by those hot-swap bays we just mentioned, and four slots for RAM. You’ll also find configurations that add liquid cooling and Intel Optane memory.

There’s not much in the way of customization, cosmetically at least. However, you can use HP’s software to overclock, boost your network speeds, and even stream your games from the Omen to a dinky laptop.

The Omen Command Center software has four sections. The first one, System Vitals, allows you to monitor the CPU, GPU, and memory utilization, as well as the temperature.

The next two – Overclocking and Network Booster – allows you to customize your processor and network’s performance.

The Overclocking section specifically gives you an option to run a benchmark to see how the machine is performing. And the last one lets you stream your games from the Omen to any other Windows PC and a decent upload/download speed. 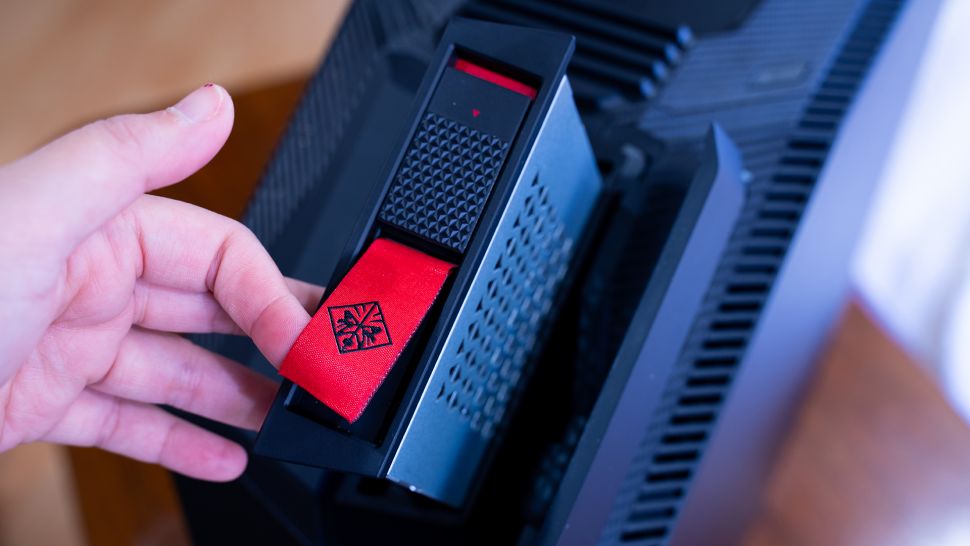 When it comes to performance, you’ll be hard-pressed to find a flaw. The HP Omen Desktop PC is a very powerful machine that can run anything on ultra, gaming-wise, without breaking a sweat.

This thing comes with everything you need and more, which means that it can handle anything you throw at it, even the most demanding games, like a hot knife through butter, giving you the most optimal and immersive gaming experience.

We tested the HP Omen Desktop PC with three AAA titles – Shadow of the Tomb Raider, Far Cry 5, and Assassin’s Creed Odyssey – on ultra and did not encounter any issues. There were no perceived texture drops, glitches, or lags.

That’s more than impressive performance, considering that all three not only came out within the last year, but are also open world games that require fast, continuous environment generation and are graphically hungry with lots of atmospheric effects. Even loading times at startup and during fast travel are blazing fast on this PC.

It’s all thanks to the top of the line CPU, graphics card, and RAM the HP Omen Desktop PC has been outfitted with. Our review unit had the Intel Core i7-8700k hexa-core processor, which is built to handle heavy loads, stream 4K UHD vids, and lots of multitasking. It was paired with a 32GB RAM and the NVidia GeForce GTX 1080 Ti, a graphics card capable of handling next-gen gaming demands, multiple monitors and ultra-high resolutions.

With this top-tier GPU, you are most definitely guaranteed zero frame drops and zero stutters even with a monitor that caps at 60Hz. When testing a monitor that could be overclocked to 165Hz and has G-SYNC technology like the HP Omen 27 Gaming Monitor… well, just be prepared to be stunned.

That configuration offers a seamless and super immersive gaming experience well worth its price and is more than you’ll need to handle most processor-hungry games for the foreseeable future. 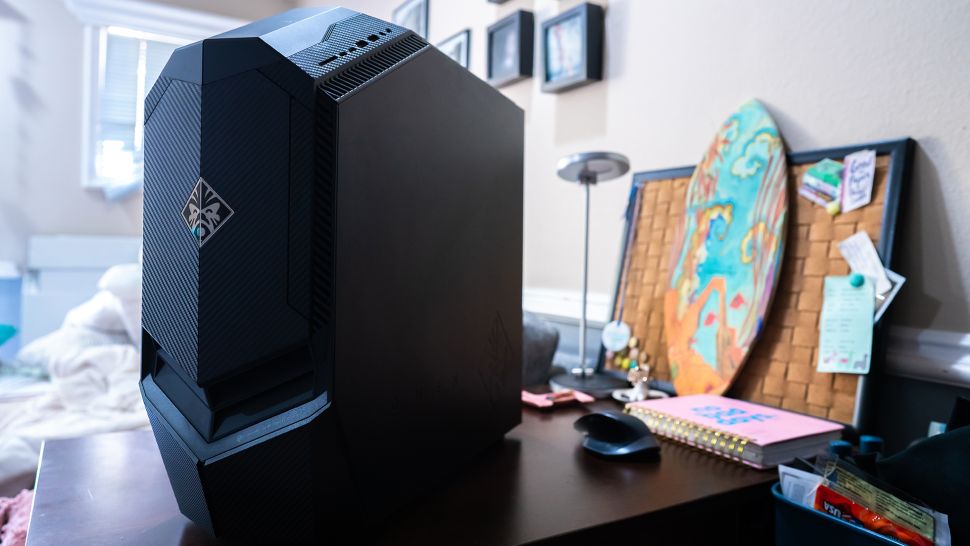 While we do agree that the HP Omen Desktop PC may not be the best-looking gaming PC out there, it has more than decent upgradability and most importantly, it is one of the best ones when it comes to performance. This powerhouse will run any processor- and graphics-heavy game like butter, giving you a gaming experience so seamless. You’ll feel like you’re part of the game.

This is especially true when it’s connected to the right monitor and running with a high refresh rate. And because it’s so powerful and easily upgradable, it’s also future-proof so it’s basically a long-term investment.

Need more convincing than that? Did we mention that it’s a great value too? Not that it’s the cheapest gaming machine – you can’t take home a high-end performance by being cheap – but its price does make sense for what it brings to the table. Even the budget-minded will appreciate this one.

Don't miss a deal at Boohoo
Best offers at H&R Block
Discounts, Sales and Deals at John Lewis
Save your money with Mobiles
Online-Shopping with House of Fraser
Best products at Myprotein
Latest Posts