Not the fastest, but this AMD-powered 2-in-1 delivers strong battery life in a top-quality chassis

To grossly simplify the story of the past two years, AMD has been hugely successful in high-end desktop systems and low-end laptops. What it’s failed to do is wrench away Intel’s dominance of the sleek ultraportable market, with all the top-tier manufacturers – from Apple to Dell to Lenovo – playing it safe with Intel inside. While the Envy is HP’s mid-range offering, this laptop is premium in everything but price. Intel should be worried.

The first sign of the Envy’s premium nature is the anodised aluminium chassis; it’s no exaggeration to say this would be a great choice for a £2,000 laptop, never mind one costing £800. It’s a solid design with no indication of weakness, right down to the smooth hinges that allow the lid to bend round 360 degrees and turn this into a convertible.

HP includes a high-quality Full HD touchscreen, too, which hit highs of 392cd/m2 in our brightness test. I was also surprised to see it cover 98.2% of the sRGB colour space with an average Delta E of 0.31: those are the kind of scores we see in panels designed for creative professionals who demand colour accuracy. While its Adobe RGB and DCI-P3 are more mundane – 69.3% and 71.7% respectively – have no doubt this is a screen you’ll love looking it.

An excellent contrast ratio of 1,820:1 and gloss finish ensure Netflix looks amazing. Don’t expect audio thrills to match, though, with the pair of upwards-facing speakers producing a light, tinny sound. Fine for watching the news, not a great pairing for a thriller that relies on music to set the tone. 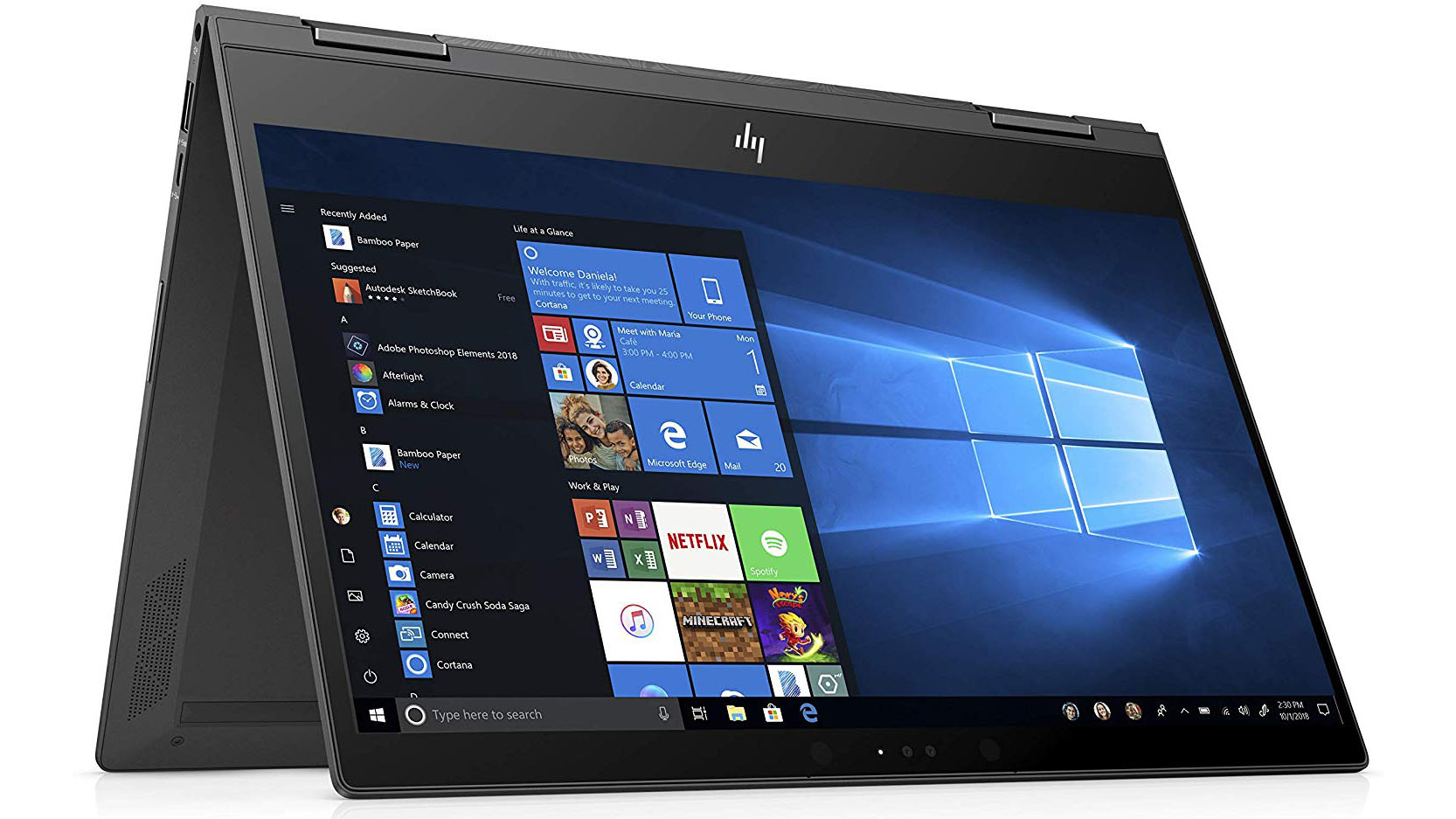 I can’t get too excited about the keyboard, which is respectable – all the keys are well separated and HP even provides a separate column of Home, End, Pg Up and Pg Dn keys to avoid function doubling – but there’s no “feel” to the keys. Similarly, I didn’t enjoy using the shortened touchpad much. It’s wide enough, but I needed to scroll up twice to move the cursor from the top to the bottom of the screen.

Those minor moans aside, HP deserves praise for how many security features it includes in this consumer laptop. There’s a fingerprint reader to the right of the touchpad, and while the really quite awful HD camera doesn’t support Windows Hello, HP includes a reassuring camera kill switch on the right side of the base. I was also pleased to see that HP protects the screen with Gorilla Glass, and if you buy this laptop from John Lewis then it comes with a three-year warranty.

So the question is: will the HP Envy 13 x360 keep chuntering on for three years? All the signs are promising. While it can’t match even Core i5 laptops when the going gets tough – note its score of 46 in our multitasking test – it’s a speedy machine in general use. That’s reflected in a score of 117 in our single-threaded photo-editing test, and a result of 3,492 in the single-core Geekbench 4 is respectable, too.

Despite the bold placement of a red Radeon Vega Graphics sticker, don’t expect great gaming performance. We’d place the Vega 8 chip a fraction ahead of its Intel UHD 620 Graphics rival, with its best result coming in Dirt: Showdown at 720p: a 61.1 frames per second result is more than playable. Notably, though, when we pushed it up to 1080p that score dropped to 28.2fps. The Intel UHD 620 typically scores in the mid-50s for 720p and around 30fps at 1080p.

More commendably, the Envy 13×360 will last a working day away from the mains. The 53Wh battery lasted 8hrs 22mins in our video playback tests (with the screen at 170cd/m2), and while HP provides a compact 65W power supply that plugs into a dedicated power port, you can charge it via the USB Type-C 3.1 port on the right-hand side. With the supplied charger, it can get up to 50% in 45 minutes, too. Despite the slim chassis, HP also finds room for two USB ports and a microSD card reader, plus a headphone/mic combo jack.

Is this the perfect laptop? Absolutely not. But when you’re paying £800, you have no right to expect as high a quality system as this. Forget the fact it’s got an AMD chip inside rather than Intel, and focus instead on what you’re getting for your money: a stylish and compact convertible that can easily last a full working day. It’s our new A-List choice for an everyday laptop.