Google’s Pixelbook Go is a perfectly good Chromebook, and that’s exactly what the company set out to create.

Eight years into the Chromebook’s existence, the category is still dominated by small, super-cheap laptops. Google has previously tried to inspire greater things with halo models—the super-premium Chromebook Pixel of 2013, and the stylish Pixelbook of 2017. But most users couldn’t or wouldn’t pay for them. “We heard loud and clear that people loved the design and wanted a lower price,” said Matt Vokoun, Google’s Senior Director of Product Management for Create Hardware.

Enter the Pixelbook Go, a laptop with a careful balance of quality features and economical compromises. Its $649 starting price (via Google) is still somewhat high—and the top-end model will cost $1,399. Still, it could bolster a sparse “middle class” of Chromebooks that’s still struggling for traction. And it’s a darn sight better than the typical bare-bones model. If you’re committed to the Chromebook universe, this is a laptop worth buying.

A note about the CPUs: These are Intel Amber Lake mobile processors, designed for thin-and-light laptops. Even though they sip a mere 5 watts of power, they use high boost clocks to deliver a jolt of extra speed. They’re a noticeable improvement over the bargain-basement CPUs you’ll find in many low-cost Chromebooks.

The first two configurations are available for preorder and due to ship by October 28:

The next two are coming at an unspecified later date. At the time of this posting there was a waitlist for the Core i5 (but not the Core i7 yet):

Here are the specs common to all models:

The Pixelbook Go is delightfully thin and light. I can slide it into the document sleeve of my bag and still fit a laptop into the padded compartment next to it. The compact 45W AC adapter, with foldout prongs and a USB-C cable, is easy to tuck into a side pocket. 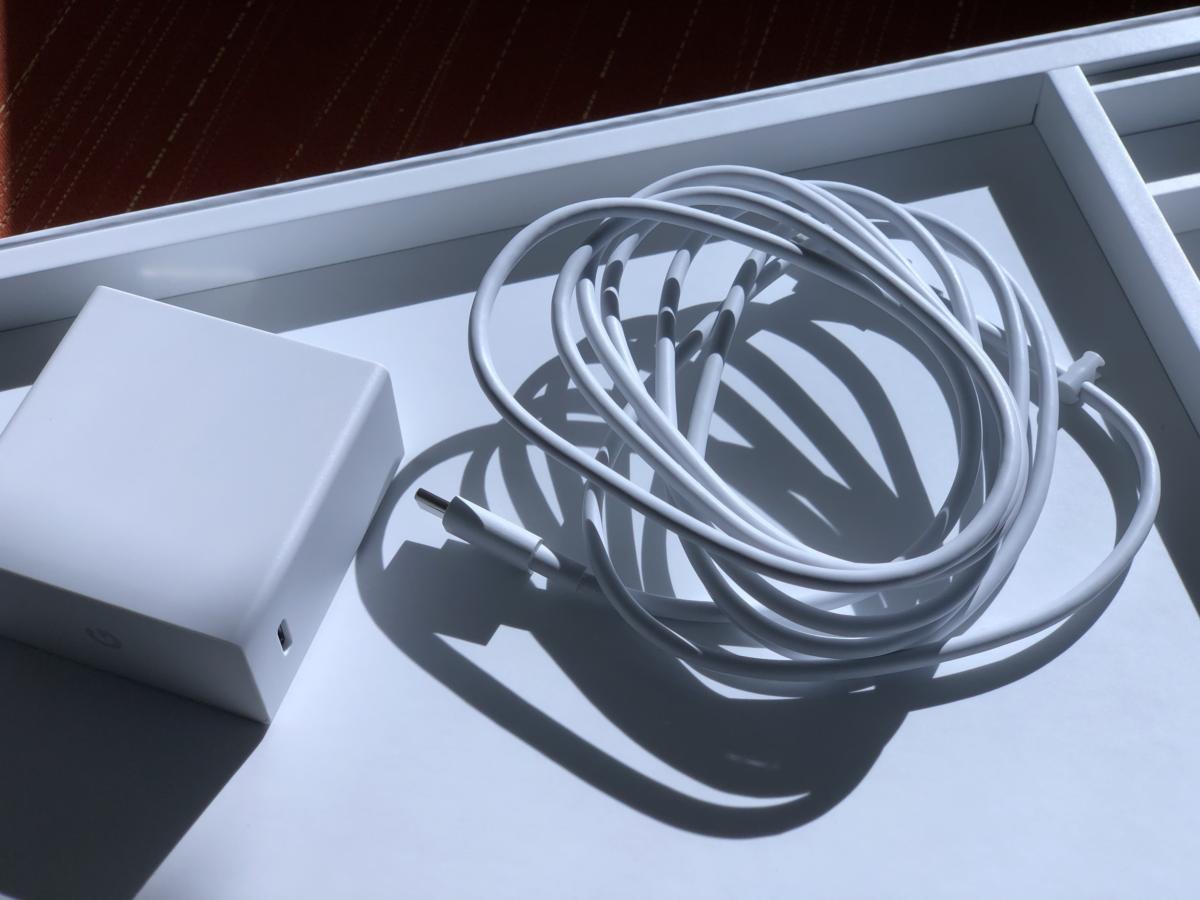 The magnesium alloy chassis is extremely sturdy. The keyboard tray has no flex, and the display lid, just a slight amount. The matte finish fends off fingerprints pretty well, looking at worst like faint smudges rather than smears.

Reasonable people can disagree about the ribbed texture and rounded corners of the bottom of the Pixelbook Go. As someone who struggles to grip smooth metal and plastic laptops, I’m all for the ribs. I also think the texture may add to the comfortable feel on my lap. The rounded corners mean the laptop isn’t digging into my thighs. 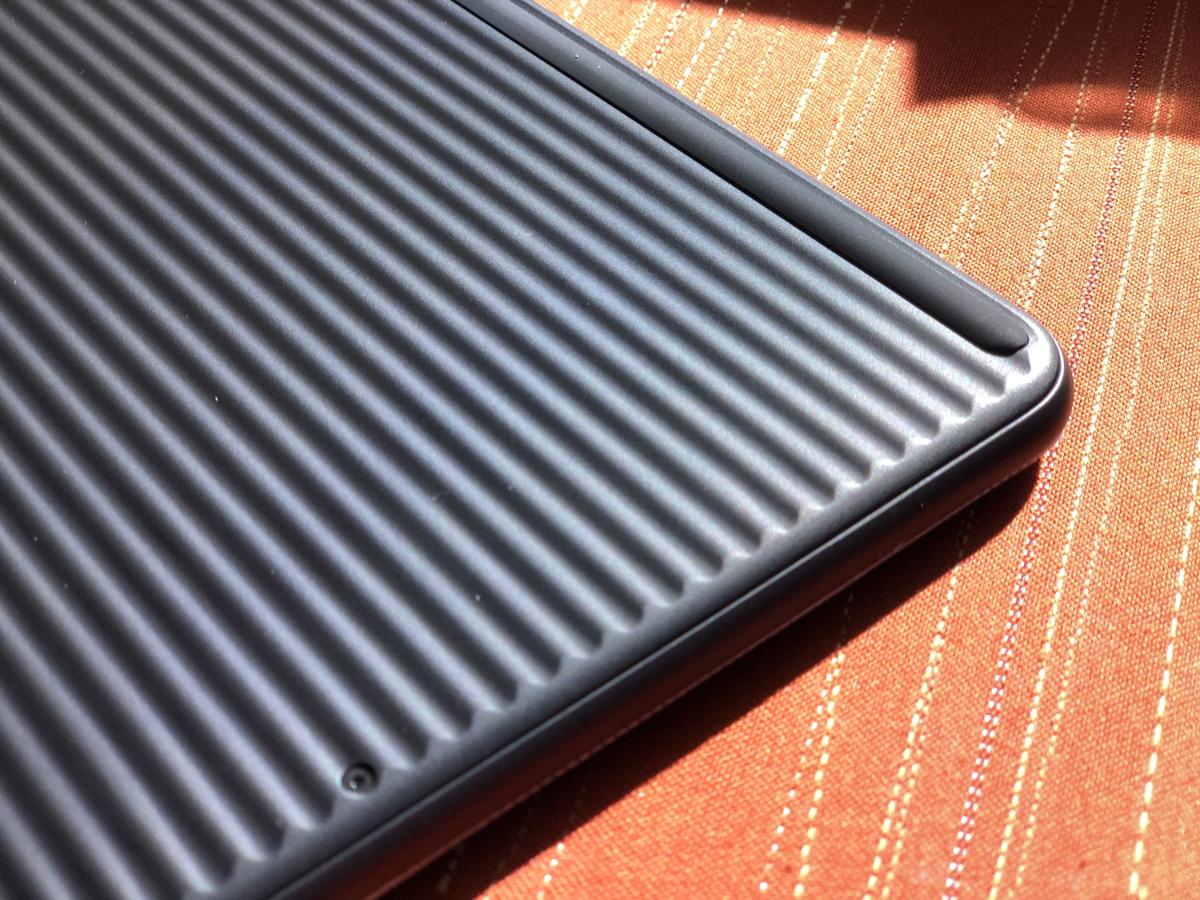 Another reason the Pixelbook Go is so lap-able is because it stays pretty cool. I noticed a slight warmth in the upper underside of the keyboard tray, near the hinge, but nothing that made me want to move it to a tabletop.

The 13.3-inch, 1920×1080 Full HD display available on all but the highest-end Pixelbook Go is a welcome upgrade from the 1366×768 HD screens we see on too many other Chromebooks. Images and text look crisp, and colors look good (the display has a 72-percent NTSC color gamut rating).

This resolution is also pretty easy on battery life. Of course, you’ll use more juice if you crank the brightness all the way up—we measured a hearty 391 nits at the center of the screen, a good range for working outside. We used the Pixelbook Go with the display set at about 200 nits, which is comfortably bright for indoor use.

The wide, 16:9 aspect ratio may frustrate some users, as it’s better for watching movies than scrolling documents or spreadsheets. Google said users wanted this aspect ratio so they could view two documents side by side—fair enough. However, Google also told me that this size and aspect ratio of display was readily available in quantity, helping with the overall cost of the Pixelbook Go. 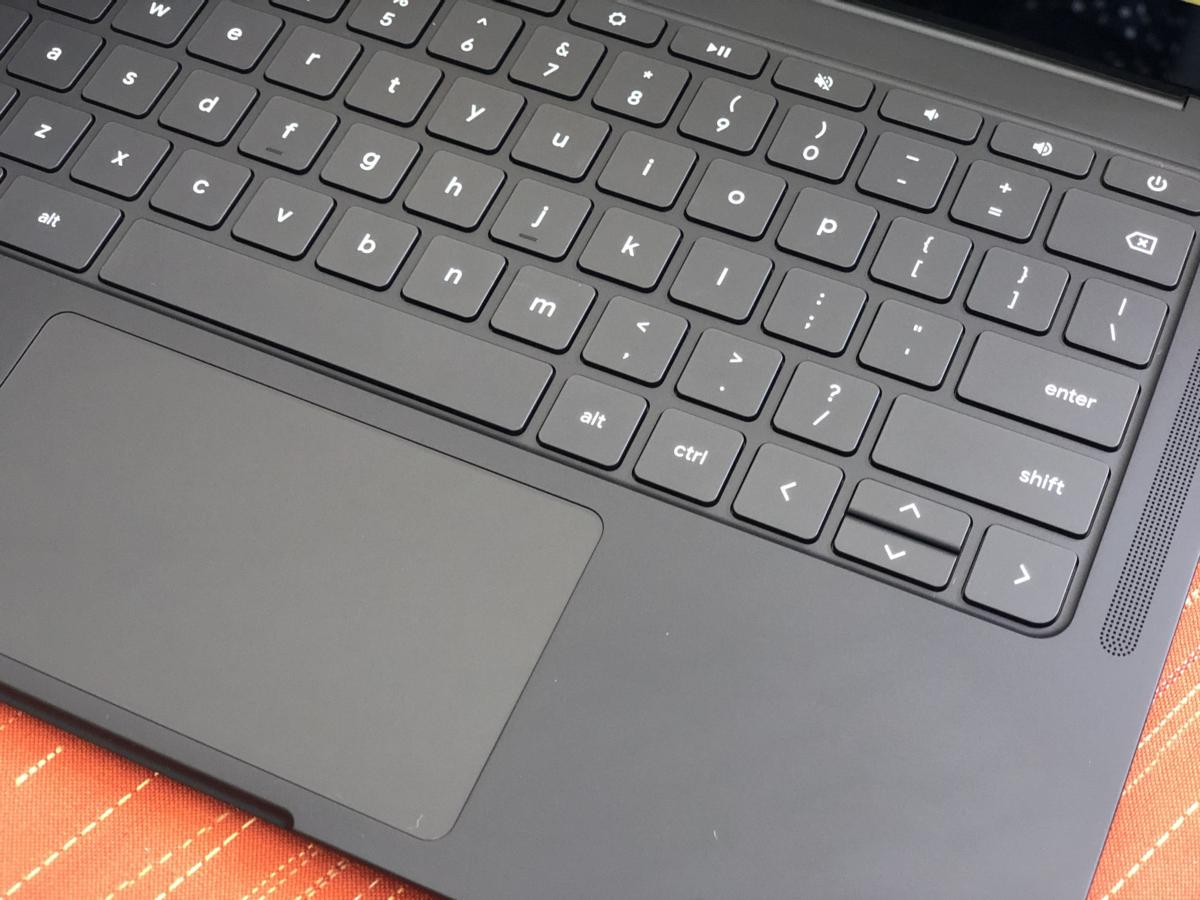 Google didn’t have to try too hard to make a better keyboard for Chromebooks. Most of the ones I’ve tried in low-end models have such harsh travel that it feels like I’m typing on rocks. The ones in the midrange Chromebooks are generally better.

The Hush Keys on the Pixelbook Go are indeed very quiet. Their 19mm of travel isn’t much, but it’s gentle as it hits bottom. I wish the keys had a bit of a dimple to help with typing accuracy, but that’s a low priority if you’re trying to save money on the design.

I view touchpads as a necessary compromise in laptops, less easy than a mouse. The large, centered glass clickpad on the Pixelbook Go is still a good example of the breed. It responds readily to my touches and taps, and it registers clicks almost all the way up to the top.

About the connectivity, note that you have just two USB-C ports, one on each side of the Pixelbook Go. Both may be used for charging, or connecting a display or a storage device. If you have legacy drives, it’s time for a USB-C hub.

The Pixelbook Go’s Intel Core i5-8200Y processor may not be designed to burn barns, but compared to the chips in most other Chromebooks we’ve tested, it’s a solid offering—certainly able to handle mainstream productivity tasks, if not graphics-intensive or gaming applications. The proof is in the performance charts below.

The cr-XPRT performance test measures Chromebook performance in basic productivity tasks as well as more demanding activities, such as watching movies or playing games. The HP Chromebook x360 14 g1, which sports a more powerful U-series Core chip, leads by a wide margin, but the Pixelbook Go heads up the middle of the pack. 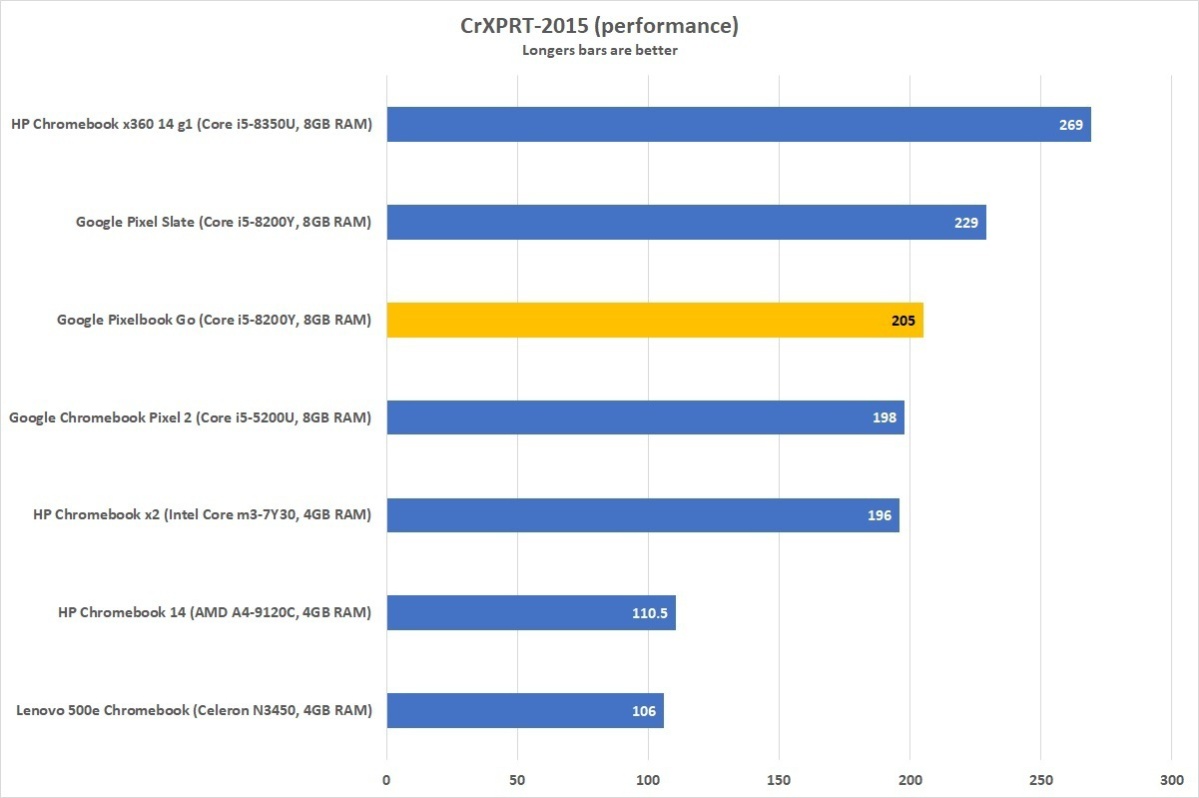 Basemark is another broad-based benchmark, incorporating web real-time graphics using WebGL and JavaScript frameworks. The Pixelbook Go does even better in this test, creating its own place between the middle of the pack and the leader. 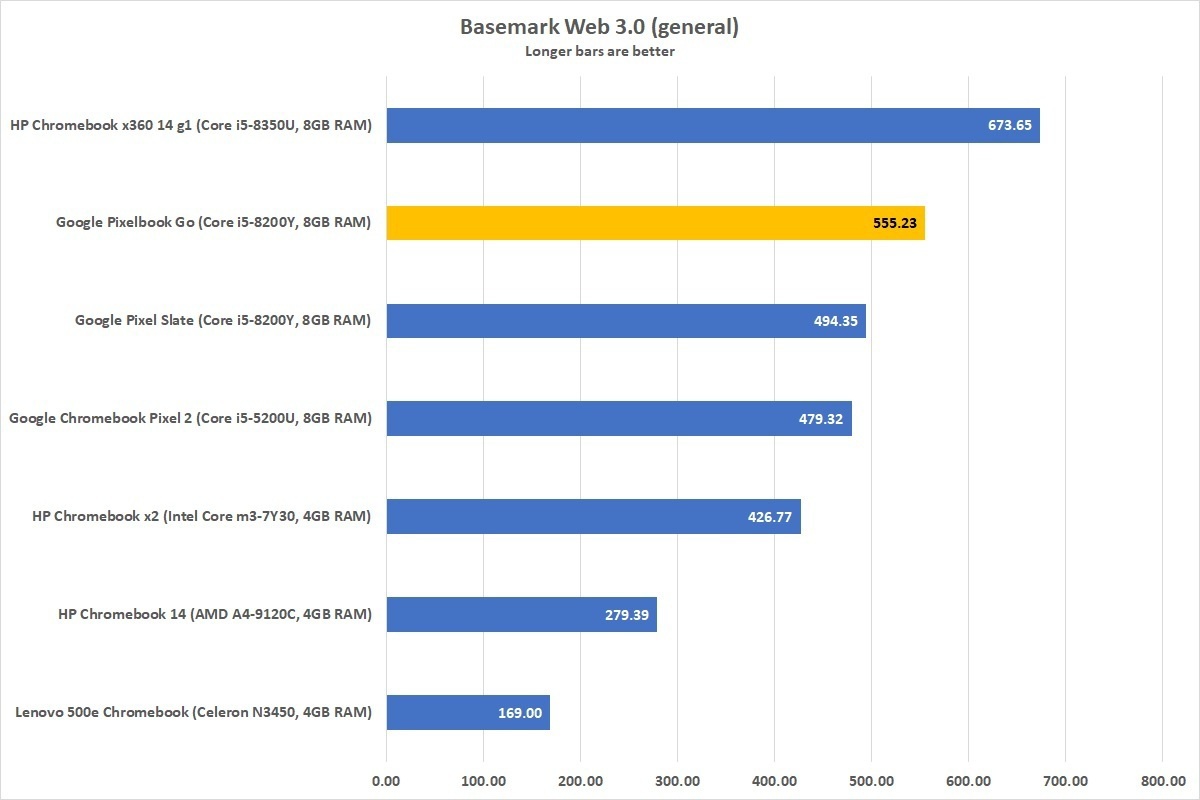 Mozilla developed the Kraken JavaScript benchmark to measure browser speed using real-world applications and libraries. Shorter bars are better here, and the Pixelbook Go once again does better than most other recent Chromebooks we’ve tested. 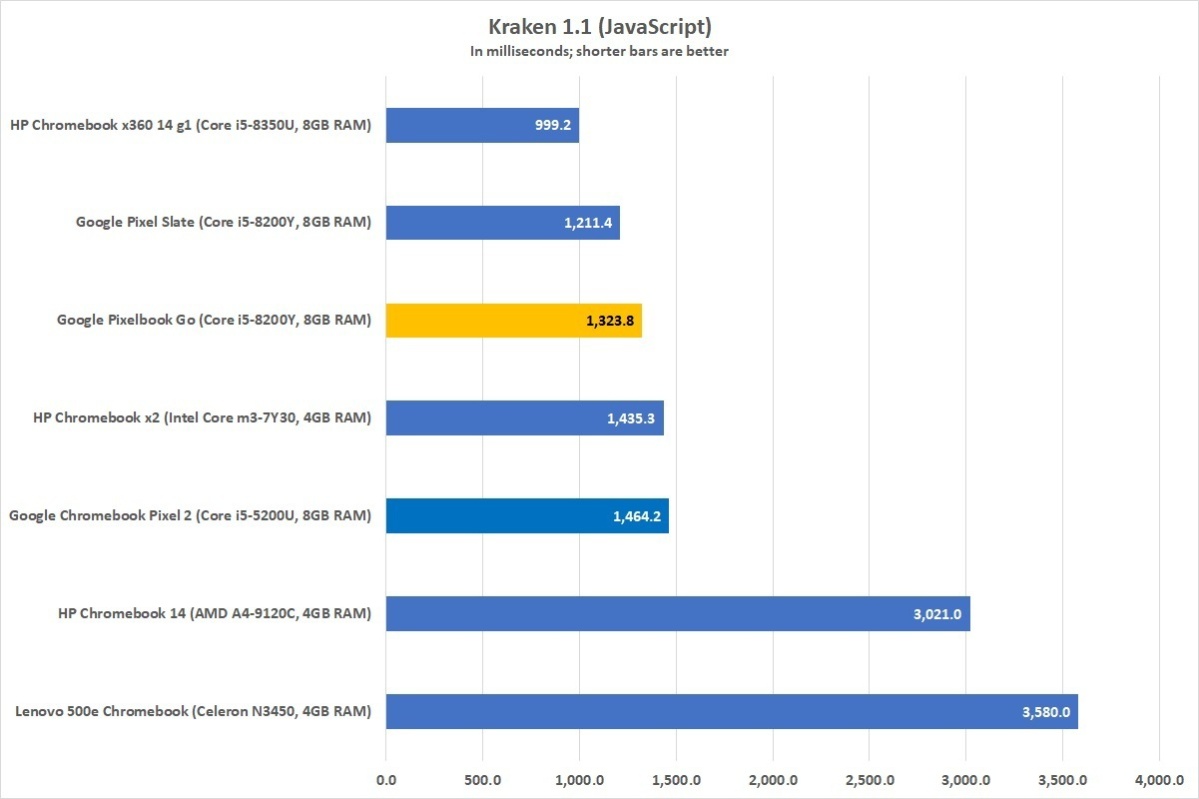 We aren’t showing a comparison chart for battery life. A minor bug in Chrome 77, the current OS version, prevented the Cr-XPRT test we normally use from running properly. We tested battery life manually instead, setting the Chromebook display to 200 nits and connecting earbuds, with the volume set to 50 percent.

We ran the Cr-XPRT performance benchmark a dozen times, then streamed an hourlong YouTube video over and over until the battery was nearly depleted. In all, we got a little over eight hours of battery life. Your mileage will vary, but this is a decent duration, though short of Google’s estimate of up to 12 hours.

A Chromebook that sets a standard

When Google vice president of hardware design Ivy Ross introduced the Pixelbook Go on October 15, she said they set out to make a laptop that would be “fast, last all day, and look and feel beautiful,” but with a more attainable price point. The Pixelbook Go achieves that with very few compromises. We don’t yet know whether users will flock to the Pixelbook Go in a way they haven’t for Google’s high-end Chromebooks, or other Chromebooks in its same price range. But Google has once again made a standard that may be hard to beat.

Don't miss a deal at Ancestry
Best offers at Boohoo
Discounts, Sales and Deals at O2 Mobile
Save your money with Go Daddy
Online-Shopping with Adobe
Best products at Newegg
Latest Posts