Of all the connected devices and gadgets I have in my house—and that’s no small number—Flume might be the smartest. It has just one job—to monitor my home’s water use—but it does it so well, I have no problem recommending it and its $200 price tag to any homeowner with a smartphone and a Wi-Fi connection.

Granted, Flume isn’t as pretty as the Nest Learning Thermostat or anywhere near as versatile as an Amazon Echo Show, but just 24 hours after I hooked it up, it knew more about my house than any other connected device I have. After a week, it was changing my habits. I’m not even really sure how it works—it merely attaches to the outside of your main water pipe with no cutting or configuration needed—but it’s the first smart device I’ve used that actually alerted me to an issue I might not have otherwise noticed. 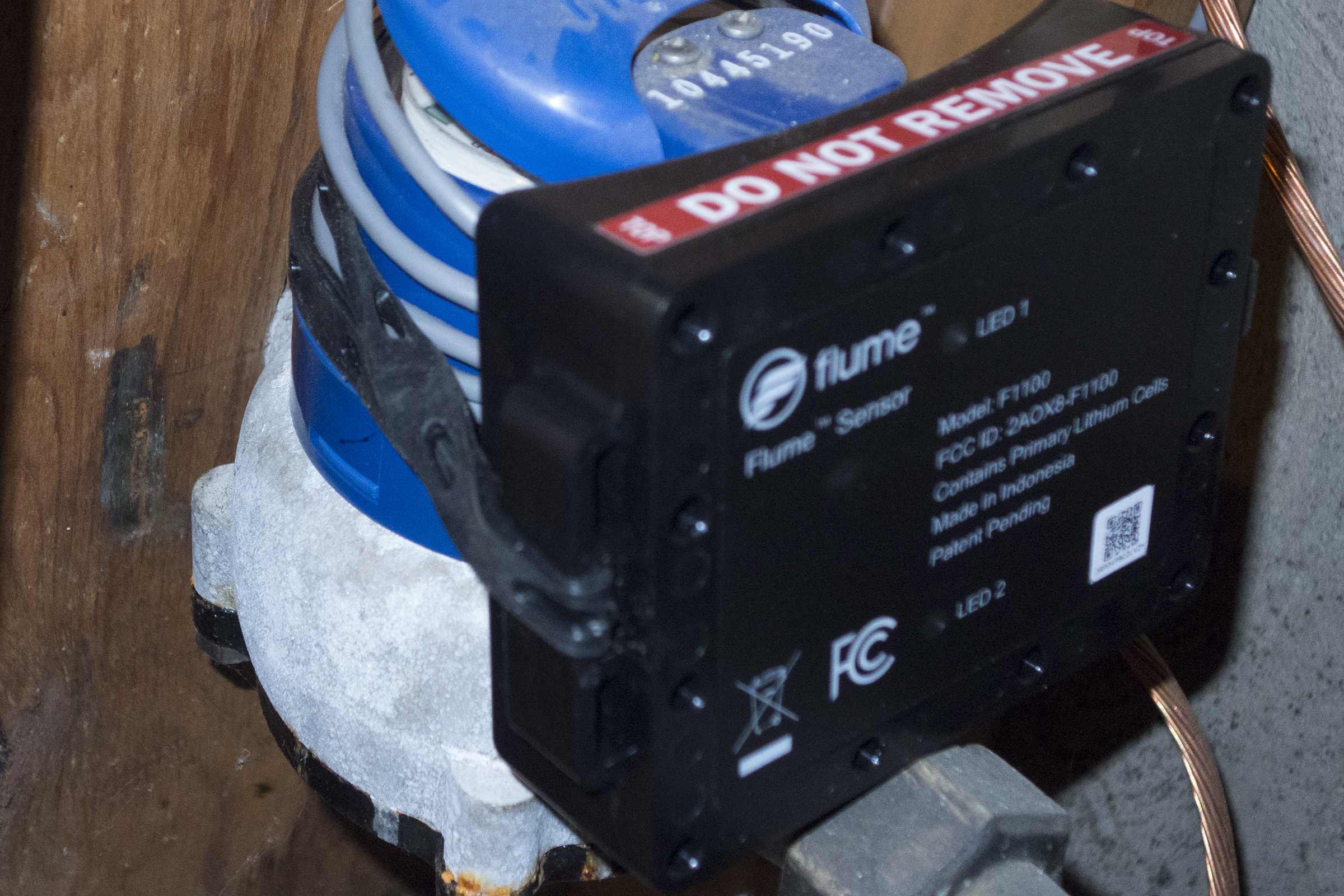 Around the holidays I had a few of my son’s friends over for a party overflowing with pizza and juice boxes, and inevitably several of them needed to use the bathroom. Surprisingly, at least one of them remembered to wash their hands, because later that night I got a text alert from Flume informing me that a potential leak was detected.

Even though the warning said water use was averaging 0.34 gallons per minute (which is relatively high), when I drilled down into the app’s minute-by-minute view, I saw a steady reading of only around 0.02 gallons per minute when the water should have been off. That led me to deduce that one of the kids left a trickle of water running in the downstairs bathroom, which I promptly turned off.

Now, you might think that a dripping faucet that I’d eventually notice isn’t reason enough to drop $200 on yet another smart device. But if Flume can detect a small leak from a faucet, it’ll also be able to tell you when a more dangerous problem is lurking, one that you probably wouldn’t see it until it’s too late. And even if that day never comes, there’s a good chance it will save you a few bucks over time.

After passing on several leak detectors that required pipe cutting, I was intrigued by Flume’s design. Instead of mounting on your main water supply, this detector attaches to your water meter—and you won’t need any tools to get that done.

Honestly, it’s not much harder to set up than a Philips Hue smart light. There’s a relatively large Wi-Fi bridge that must be plugged to an electrical outlet to communicate with the main sensor, but since your main water pipe is likely in the basement or tucked out of the way, it shouldn’t be too hard to hide it. The sensor and the bridge don’t need to be near each other either (since they communicate via radio waves), so any tucked-away outlet will do. I put mine in the basement. 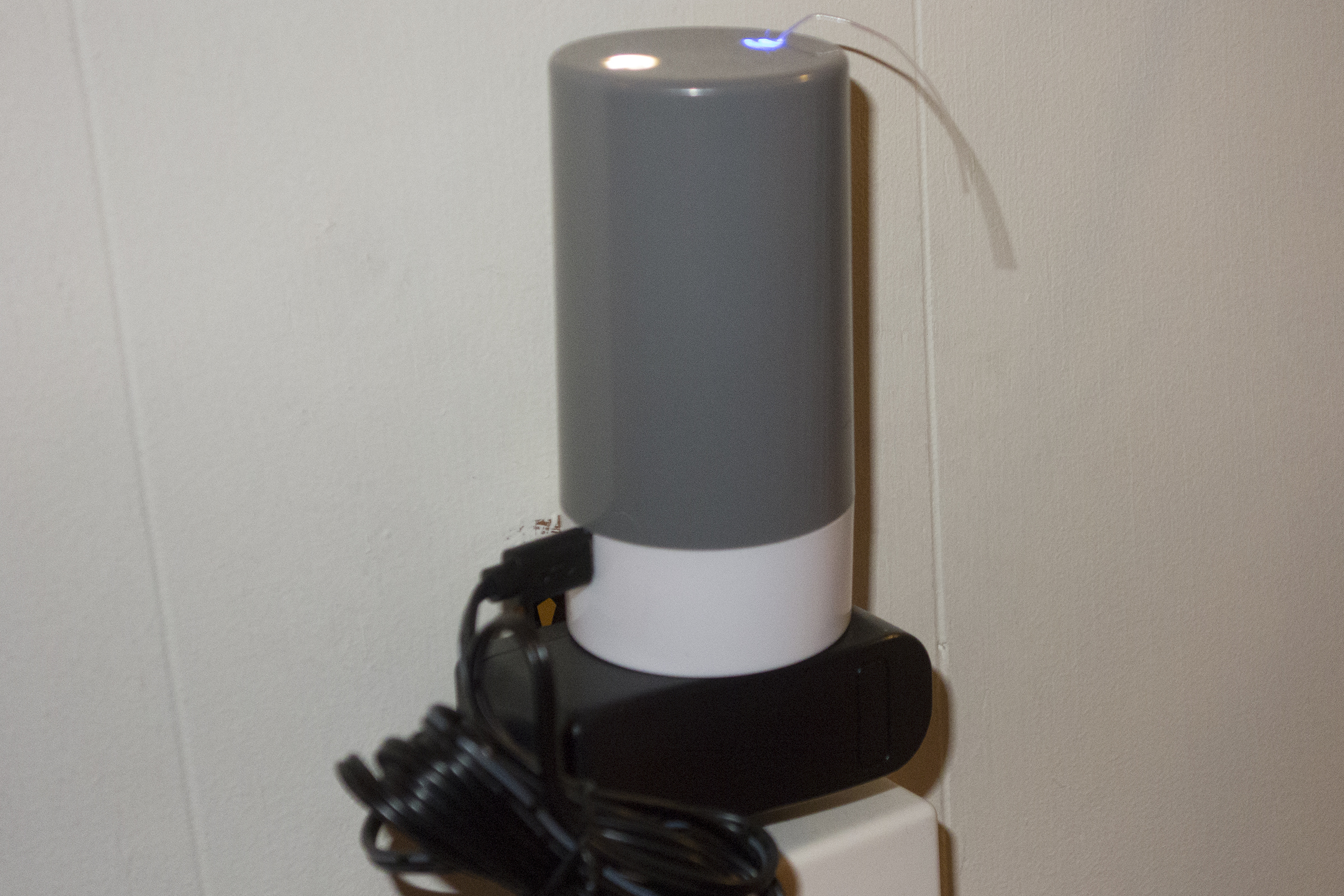 Once the Flume is connected to the bridge, you’ll need to strap the Flume to your water meter. It’s a bit like putting on a face mask for scuba diving, with a rubber strap that tightly secures it to the pipe and a large curved rectangle that rests on the front. Thankfully, that doesn’t need a power source, though at some point the “long-life” batteries inside it will need to be changed. Just be warned: Some water meters might not be compatible with Flume, so check your model before you buy.

Next, you’ll get a couple of prompts in the Flume app to turn on a nearby faucet, so the sensor can start reading the water flow. From then on, Flume will be on autopilot. If you’re the kind of person who likes fiddling, Flume will disappoint you—there are barely any settings, and even the obligatory Amazon Alexa integration only offers stats you can easily see by opening the app—but I appreciated Flume’s quiet functionality.

Flume’s main selling point is to catch leaks originating in your pipes, and as such, it does a great job. In my anecdote above, it detected water flowing at a very small rate, and if you’re on vacation or otherwise away from your home for a long stretch, you can opt to be alerted when any water moves through your supply lines.

Since Flume doesn’t install in line with your water pipe, however, you can’t send it a command to shut off your water supply in the event of an emergency (or have it do so automatically). So if Home Alone’s Wet Bandits strike, you’ll know, but you’ll need to phone a family member or neighbor to ask if they will shut off your water supply if you’re on vacation. While that makes Flume less capable than competing products such as the $400 Flo by Moen or the $700 Phyn Plus, it’s also considerably less expensive than either of those devices. 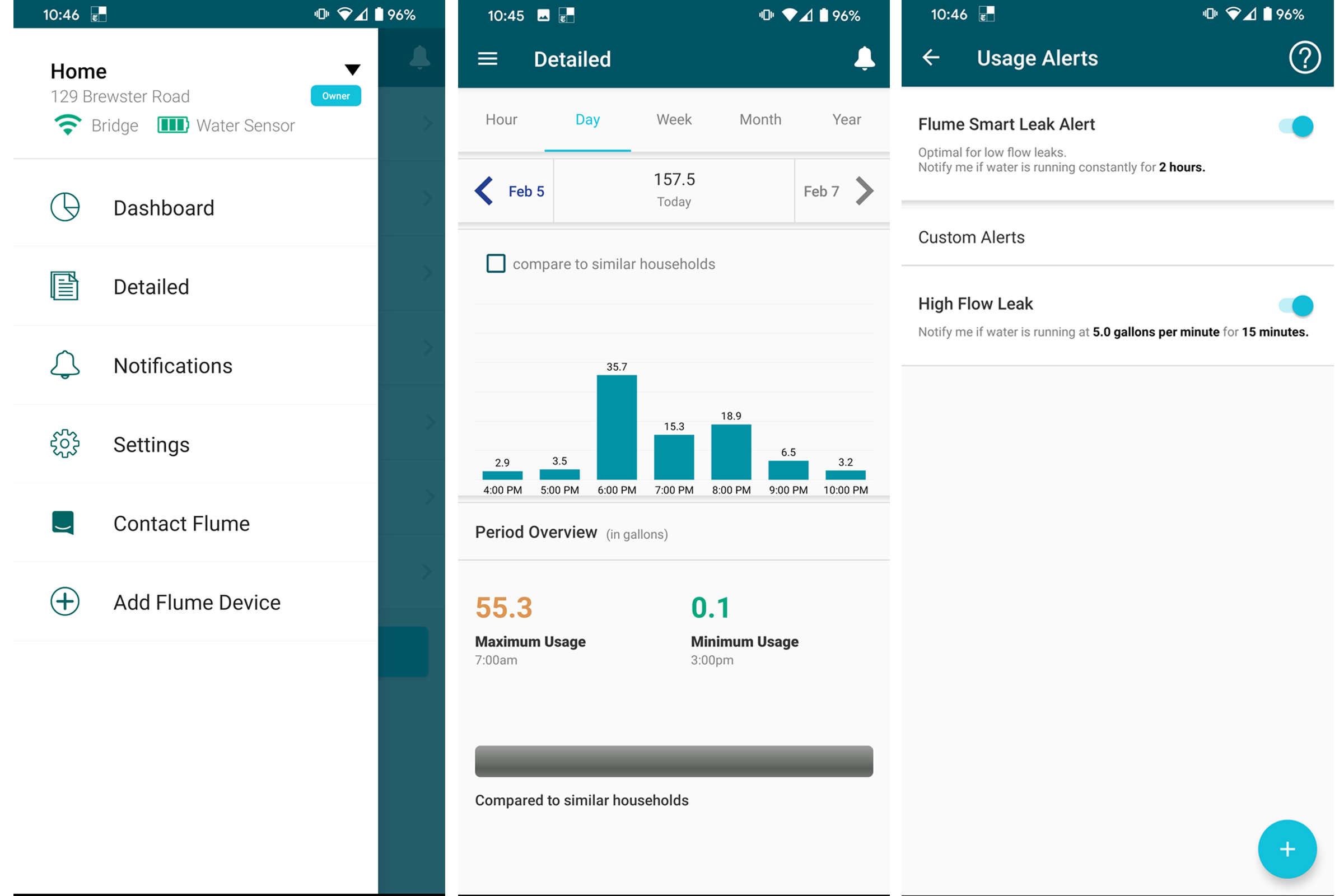 Still, I found Flume more useful on a regular basis than, say, a physical sensor that detects wetness to ping your phone. I wouldn’t mind the ability to interact with other smart devices—like maybe flashing a Hue light when a leak is detected—but I was happy with Flume’s detection skills. And I have a very simple house. If you have an irrigation or inground sprinkler system, Flume will monitor that too. (Flume and Orbit—manufacturer of B-Hyve smart sprinkler timers—announced a partnership at CES that will enable homeowners who buy both systems to monitor indoor water use independently of outdoor water use.)

Even without traditional smart home if-this-than-that capabilities, Flume is still plenty intelligent. You’ll need to spend a week or so with it before you can get a decent overview of your water use, but it’ll be far more enlightening than your monthly water bill. Whenever you run water using one of your faucets or spigots, Flume will estimate how many gallons you’re using by reading your meter like the water company does, so you can break it down by weeks, days, and even individual showers. In the Detailed view, you can compare your usage to similar households.

And that’s where Flume can truly inject some smarts into your daily routine. Yes, it’s nice to be notified if and when a potential leak arises, but I got far more use out of Flume’s weekly budgets and real-time water-use charts. I can’t stop my son’s friends from mindlessly leaving the faucet running, but I can shorten his showers. And be mindful of overrunning water while I brush my teeth or wash dishes. 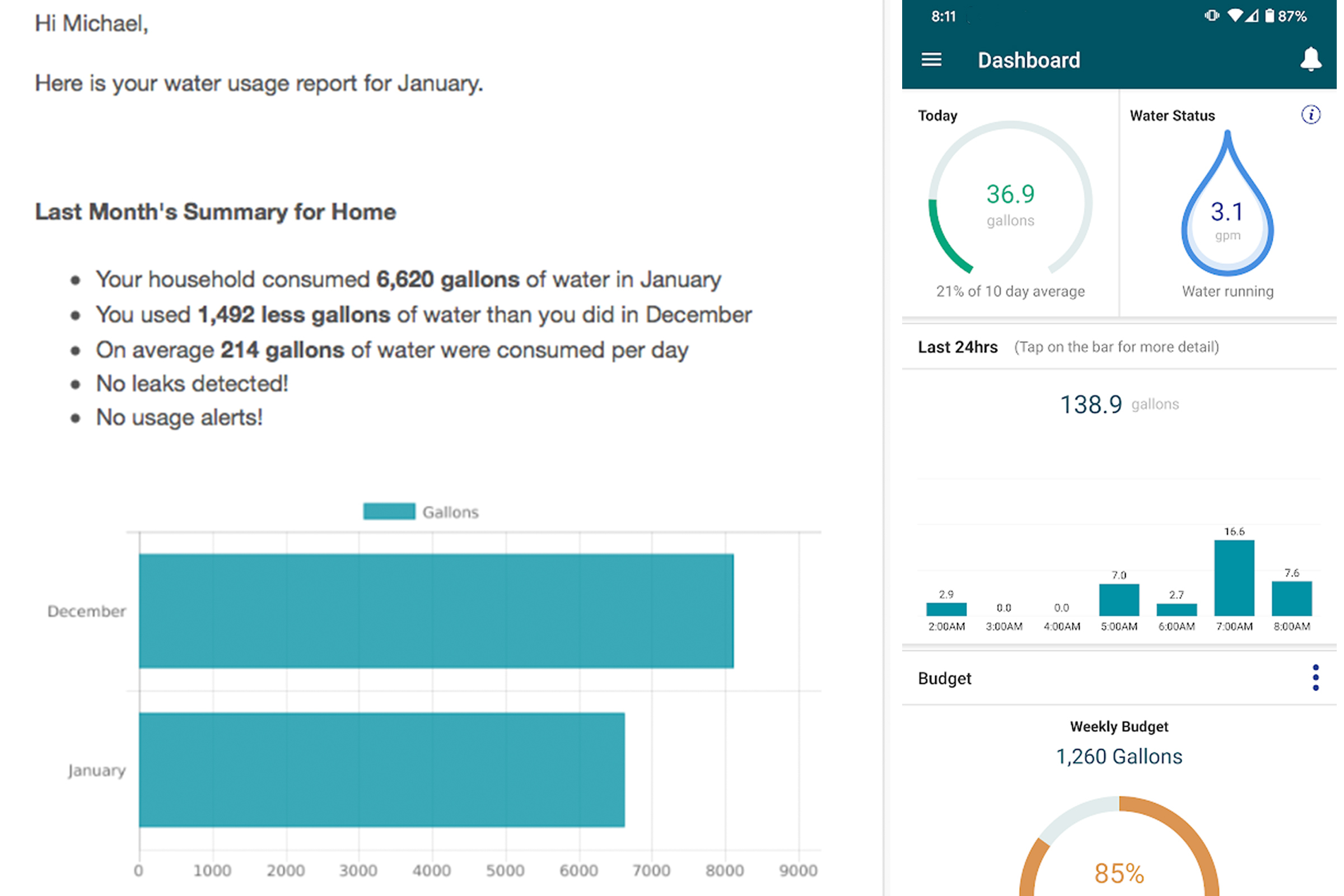 In just a month with Flume, I was able to lower my water usage just by paying attention to the alerts I received. It’s basically done for my water bill what my Nest thermostat did for my heating bill. Granted, it’ll take some time for the $200 Flume to pay for itself, but Flume has demystified the fluctuations in my water bill.

Should you buy the Flume Smart Water Monitor?

A $200 water monitor that doubles as a leak detector might not be high on your list of must-have smart home devices, but Flume’s mix of easy setup and hassle-free monitoring makes it an excellent addition to any home, smart or otherwise.

Flume is the rare smart home product that is equal parts functional and delightful—and it might save you a few bucks to boot.

Don't miss a deal at H&R Block
Best offers at Bodybuilding
Discounts, Sales and Deals at Turbo Tax
Save your money with House of Fraser
Online-Shopping with Argos
Best products at Brian Tracy
Latest Posts