A quiet, elegantly designed and effective desk fan with air purification built in, but it’s pricey

Dyson’s fans have spawned a thousand copies since they first appeared on the market in 2009 but the company hasn’t rested on its laurels. Its design engineers have been hard at work and the Pure Cool Me is the result of their travails.

Dyson Pure Cool Me review: What you need to know

Originally launched alongside the Dyson V11 cordless vacuum cleaner, the Pure Cool Me is a personal fan, designed to keep you cool while you’re sitting at your desk.

What makes the Pure Cool Me special is that it employs Dyson’s new “Core Flow” technology, borrowed from the iconic Harrier Jump Jet. This uses a motor set into the base of the fan to suck air through the base, forcing it out through two small openings at the top of the fan, across a smooth, domed surface. When these jets of air collide, the fan creates a powerful single jet of air that projects out into your room.

The Pure Cool Me’s other main feature is that it doubles as an air purifier that can extract fine particles such as pollen and smoke from the air, cleaning it as it cools you.

There are hundreds of desk fans you could buy instead of the Dyson Pure Cool Me. Most would do a decent job for considerably less money than the £299 Pure Cool Me but none squeeze the same range of feature in.

A couple of examples from our best fans page include the £32 Honeywell HT900E (although this doesn’t oscillate) and the £100 Meaco MeacoFan 1056, which oscillates up and down but doesn’t have a purification filter.

None of the rivals I’ve mentioned above can quite compete with the Pure Cool Me’s looks, though, not even the other Dyson. This is, quite simply, one of the most futuristic-looking fans I’ve seen: a squat, bulbous fan head perches on top of a short silver column peppered with perforations.

There’s a circular LCD display at the base of the column at the front and a small remote control attaches to the column just above this. You can turn the fan on and off via a power button at the rear but most functions are accessed via the remote control exclusively, so take care not to lose it.

These functions include: a fan control, which is used to select one of ten different power levels; a sleep timer, which turns the fan off after 30 minutes, one hour, two hours, four hours or eight; another button that lets you turn the 70-degree oscillation feature on and off; and an info button that lets you view the status of your filter. 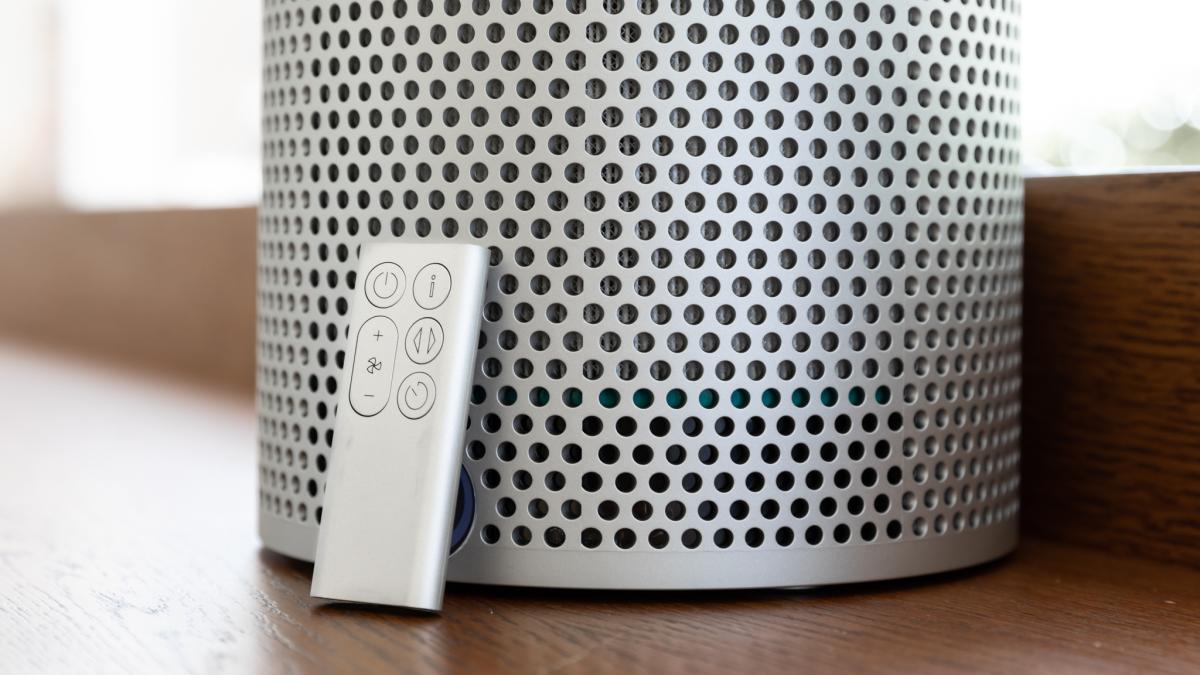 The vertical position of the airflow is adjusted manually by pushing and pulling the central dome up and down, which is easy enough. Removing the activated carbon and HEPA filter for replacement is straightforward, too: simply push the two buttons on either side of the fan head, pull it off and you can remove the filter by pulling on a couple of tabs.

Dyson says a filter should last you around a year based on running the fan 12 hours a day, although the fan will let you know when you need to replace it via the LCD display if you use it more or less. Replacement filters cost £50.

The Pure Cool Me is surprisingly effective for such a compact unit. From a metre away I measured airflow speed with an anemometer and the Pure Cool Me produced a figure of 2m/sec straight ahead, which dropped to 1.5m/sec 10cm off-axis horizontally (with oscillation turned off).

That’s a great result and a surprisingly wide sweet spot for a desk fan. It matches my Bionaire tower fan for peak power, which is considerably larger, and has a wider horizontal sweet spot than that fan, too. Perhaps more impressive is the fact that there’s not much in it between this and the much more expensive Dyson Pure Hot+Cool fan. That fan peaks at 2.4m/sec dead centre and falls off to 1.9m/sec at 10cm off-axis horizontally. 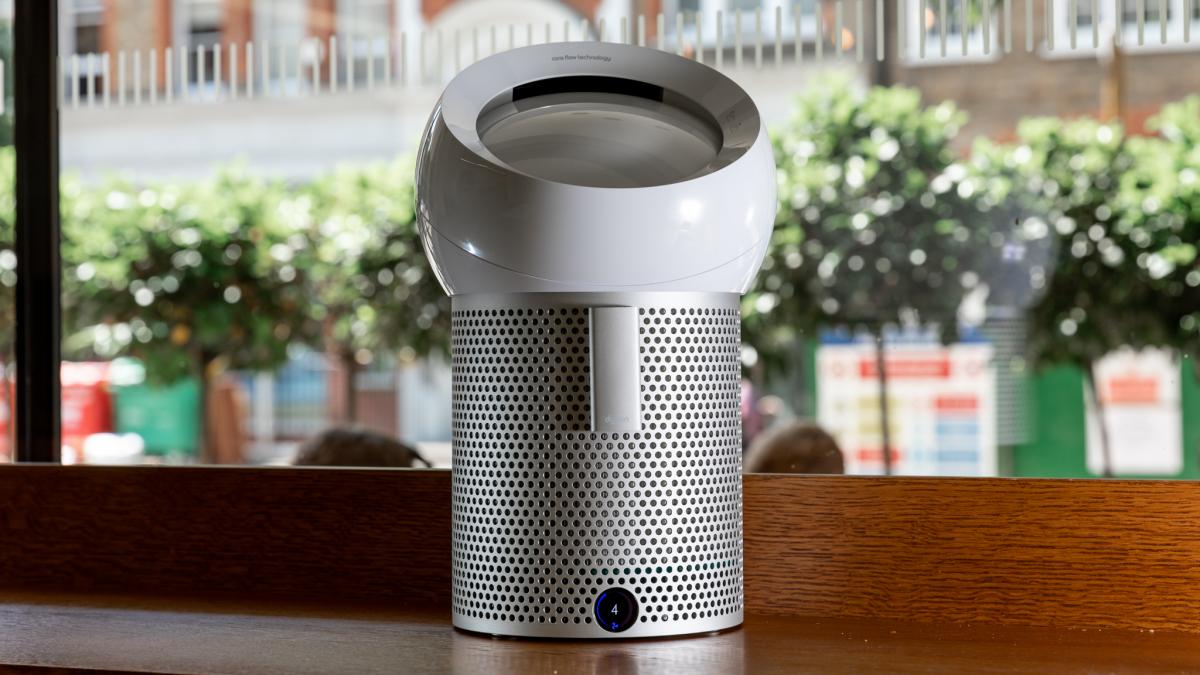 The Pure Cool Me is pretty quiet, too. At power levels one to three, it’s effectively silent, and the noise levels only rise to noticeable levels in a normal room above five out of ten. Even then, the character of the noise is pretty easy to live with. There’s no whirring or whining or mechanical rattling, just the soothing white noise of air movement.

The Dyson Pure Cool Me isn’t all about the fan, though. It also has air purification tech built in. This takes the form of a large, drum-shaped HEPA and activated carbon filter that sits snugly into the cylindrical base below the removable fan head.

The fan sucks air in through this, before jetting it out of the head at the top and Dyson says it will filter particles as small as 0.1um in size. That means it’ll filter out pollen, dust and smoke among other things, so it could be a help for hayfever sufferers. 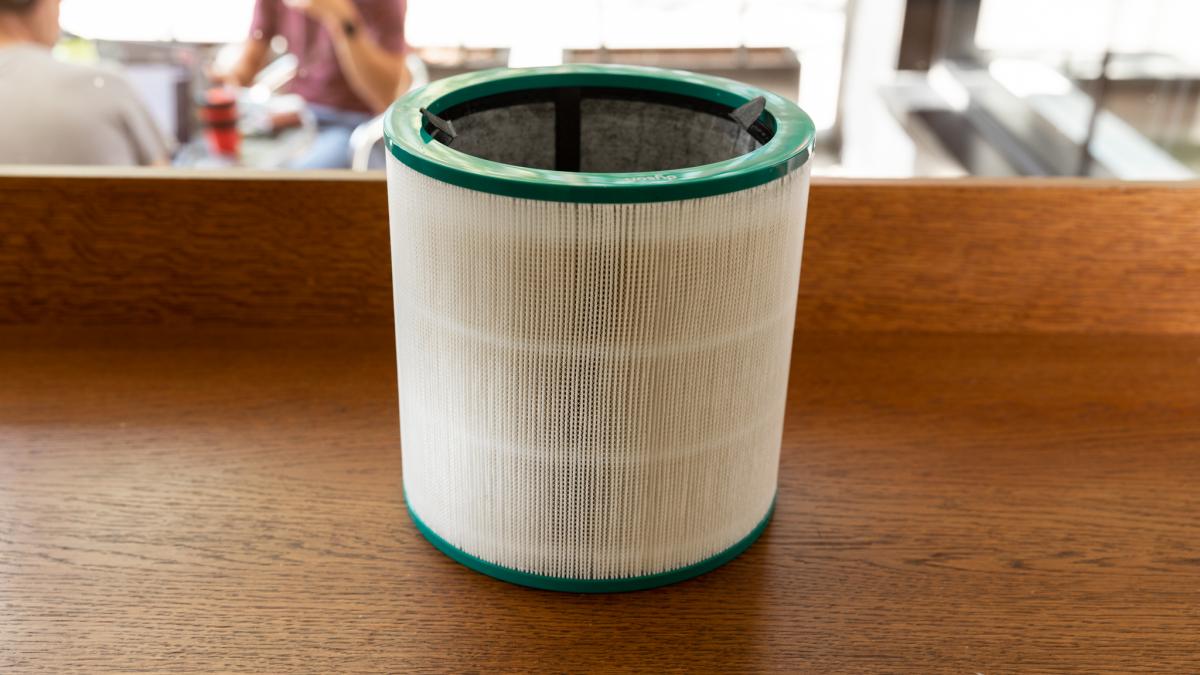 To test the effectiveness of the fan’s air purification tech, I put the fan on maximum power in a small 2 x 2.5m room and lit a 5g smoke pellet next to it see how quickly it could clear the air, monitoring the results with a Foobot air monitor.

Again, I was impressed with the Pure Cool Me’s overall performance and although it was slower at clearing the smoke than the larger Dyson Pure Hot+Cool, it wasn’t far behind. After an hour, the particulate count was at 348ug/m3 where the bigger fan had reduced the count to 327ug/m3. That’s from a starting figure of well over 1,000ug/m3 (that’s where the Foobar monitor tops out). 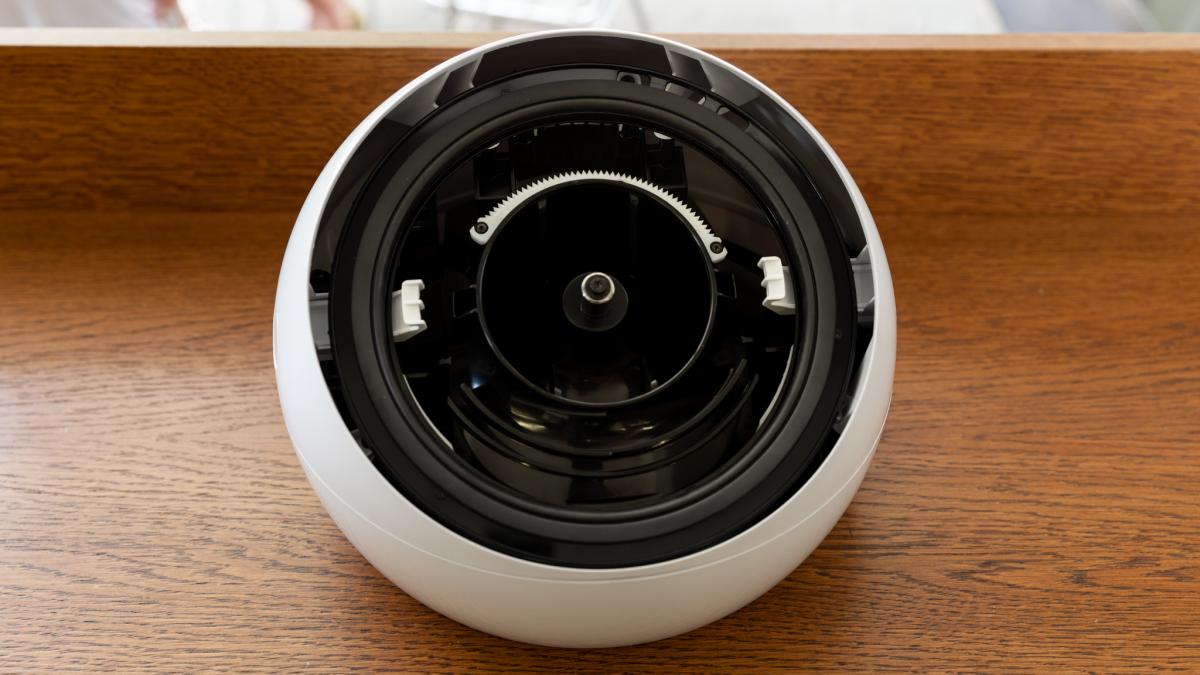 The air purification tech certainly works, then, and the fan itself is quiet and shifts plenty of air. In fact, I’d say that although the Dyson Pure Cool Me is designed principally as a personal cooling device, it’s powerful enough to cool a small room too.

It is expensive, of that there is no doubt, but remember that £299 gets you not only a high-quality fan that looks great but also an air purifier that will cut down on dust and other small airborne particles in your home. Remember, too, that an air purifier of a similar standard will cost you at least £80 and will add to the clutter in your house.

From that perspective, the Pure Cool Me is a completely different proposition from your average desk fan. Sure, it is pricey but if you want this particular set of features in one device it’s well worth paying the premium for.

Don't miss a deal at Mobiles
Best offers at Bodybuilding
Discounts, Sales and Deals at Marks and Spencer
Save your money with Currys
Online-Shopping with FNAC
Best products at Carphone Warehouse
Latest Posts