Once upon a time, if you asked anyone which was the best photo editing software, they’d always say Photoshop. OK, so Photoshop is still the most powerful program there is at what it does, but what we want to do as photographers has changed.

It’s not much good at organising your photos, either. It does come with Adobe Bridge, but that’s just a glorified folder/photo browser, not an image cataloguing tool.

And while many photography experts understand the value of shooting unprocessed raw files and processing them later on the computer, very few are aware that not all raw converters are the same and that Adobe Camera Raw – as used by Photoshop – is not necessarily the best.

So can Photoshop hang on as the best photo-editing software on the market, and which are the rival apps you should be looking at too? Read on to find out. 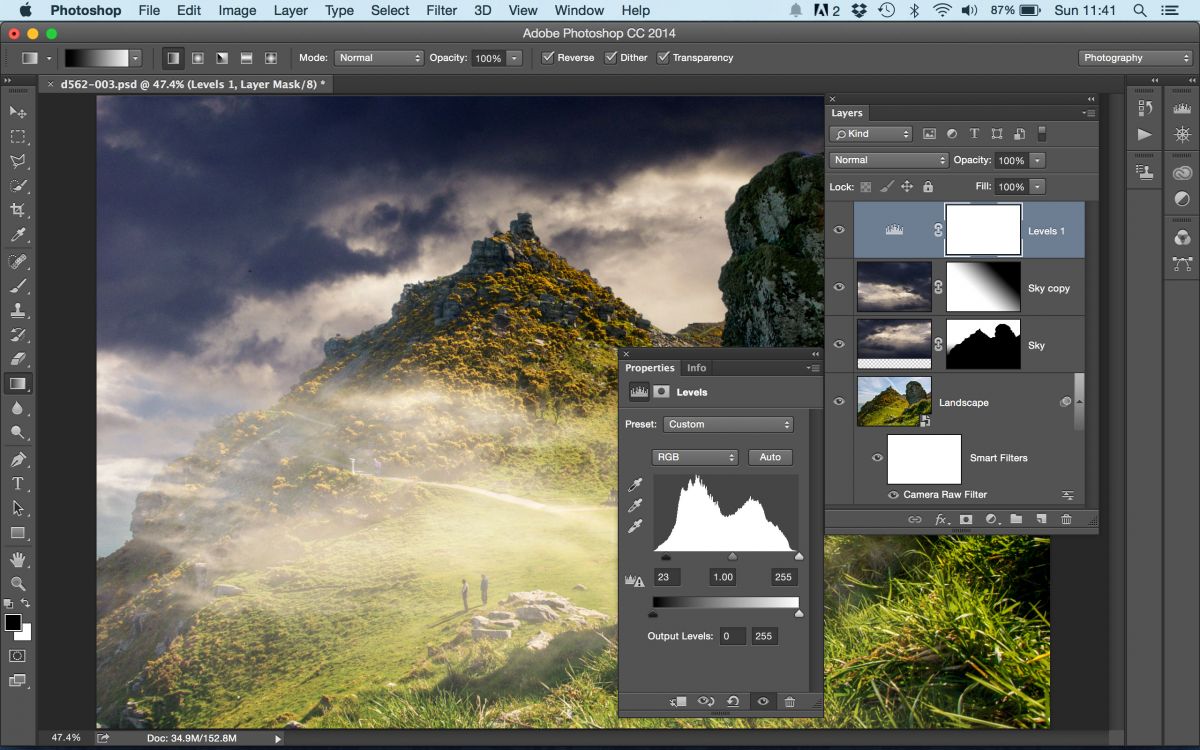 Get Photoshop and Lightroom for a single and surprisingly affordable subscription

Adobe caused a storm when it moved over to a subscription system for its software, and it did initially look like a pretty pricey deal. But the price has dropped, the dust has settled and the world has carried on turning on its axis. Now, if you take out an annual subscription, you can get Photoshop and Lightroom for just £8.57$9.99 per month.

And you do need both programs. Photoshop is sophisticated but limited. For layers, masks, selections, retouching and complex, multi-step imaging processes, it’s impossible to beat, and it manages to present these tools in a remarkably clean, fast and efficient interface. On the downside, it doesn’t offer a library of single-click creative effects or any way of organising a large and growing photo collection. Photoshop is like a giant box of spanners – it has all the tools you could possibly want, but it’s not going to show you how to fix your car. 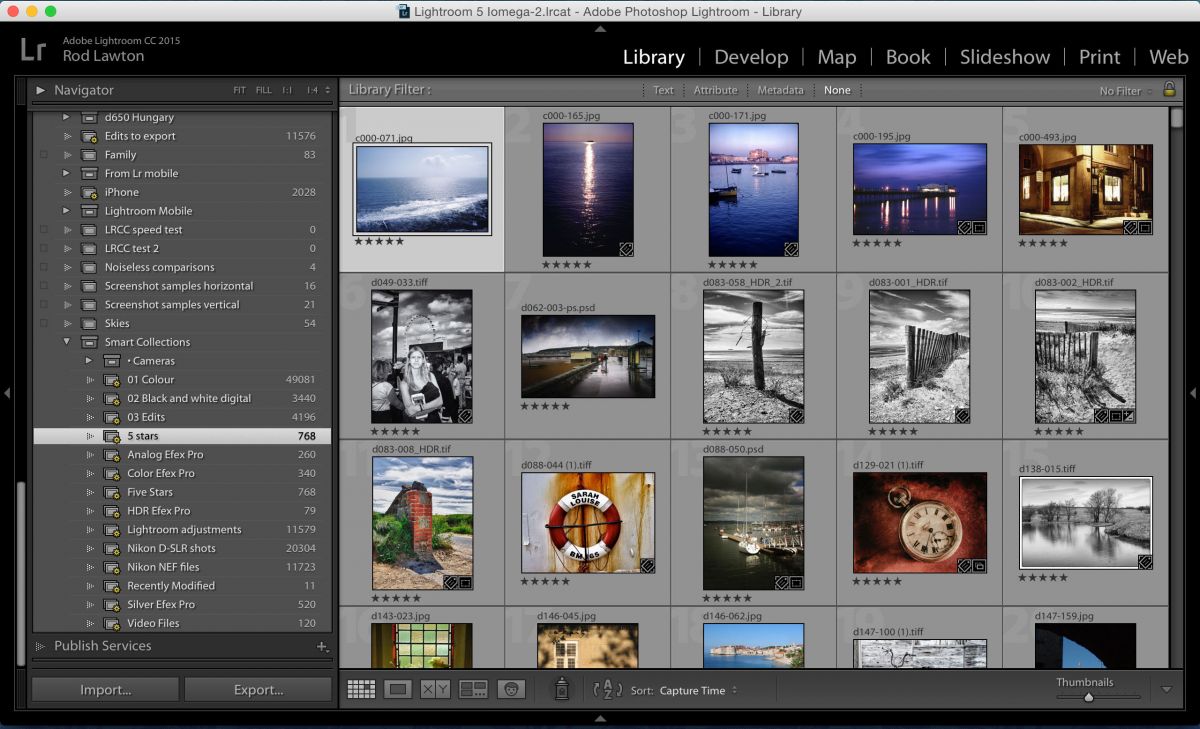 That’s why Lightroom is an indispensable part of the Adobe double-act. Lightroom combines an image cataloguing database with Adobe Camera Raw’s ‘non-destructive’ editing tools in a slicker interface. It means that you can make non-permanent adjustments to an image which you can change later – and your original photos are never modified. These tools can’t do everything – for selections, layers, masks and many more complex effects you’ll need Photoshop. But that’s OK, because you get both programs in the Adobe Creative Cloud Photography plan and they complement each other really well. 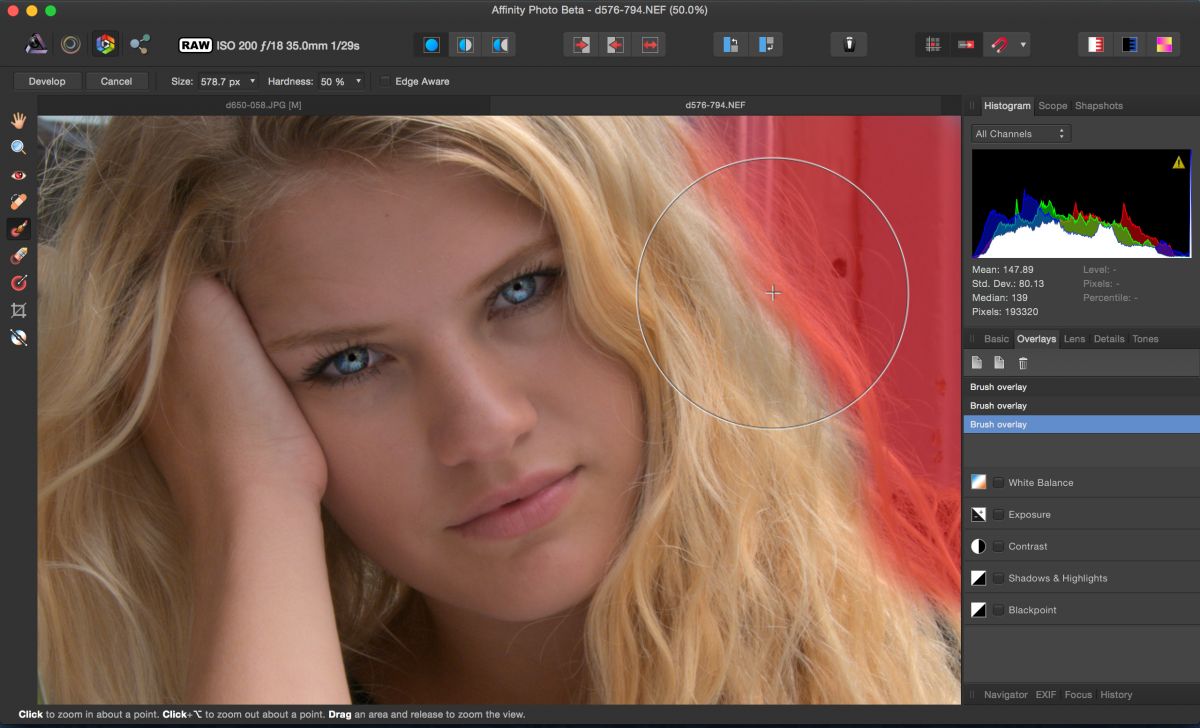 Mac users who don’t need Lightroom’s organisational tools and who long for a Photoshop alternative on an old-school licence arrangement need to look at Serif Affinity Photo. Best-known as a developer of budget Windows creative applications like PhotoPlus, Serif has branched out into professional Mac software with its new ‘Affinity’ range. Affinity Designer, the company’s vector drawing/illustration app has already caused a storm and Affinity Photo, its Photoshop rival, looks set to do the same. A few of the terms and processes are different, but if you can use Photoshop it won’t take you long to get used to this. Affinity Photo’s advantage (apart from the price) is that it’s been built from the ground up for the latest computing hardware. 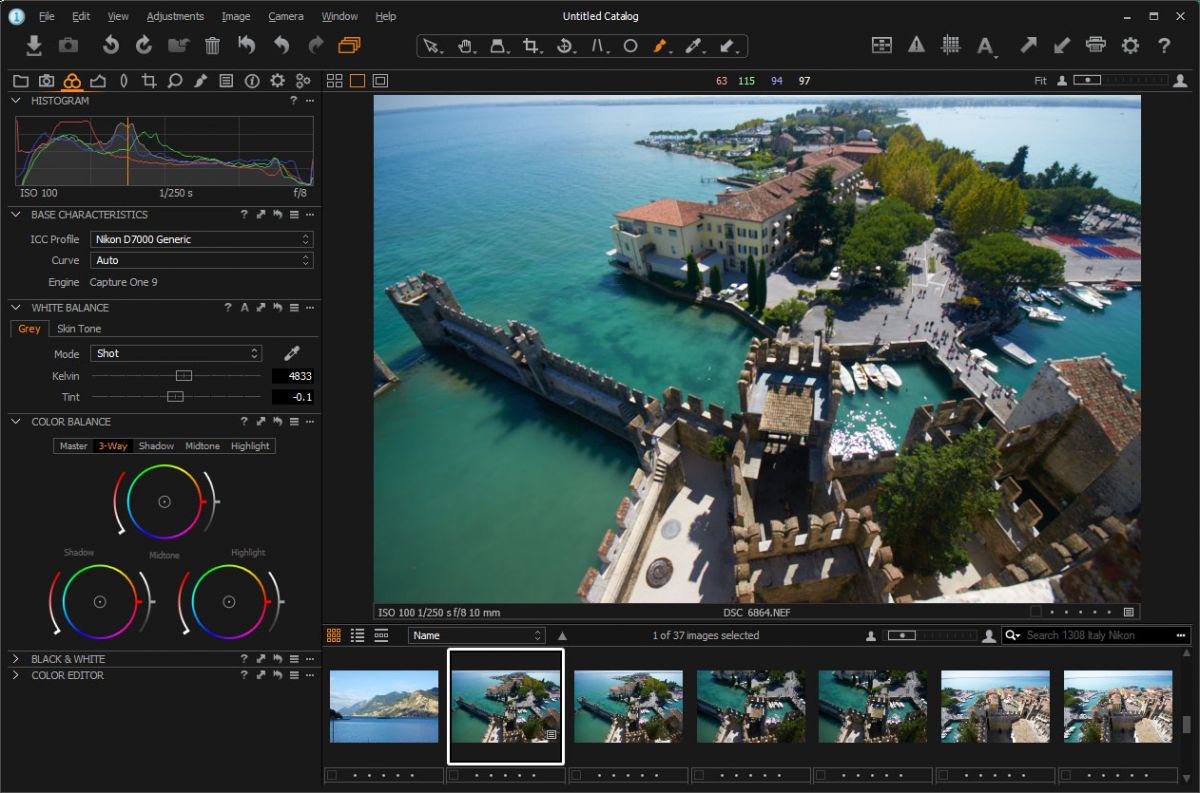 Capture One started out as a dedicated software tool for Phase One’s professional medium-format cameras, but it’s been developed into a very powerful raw conversion and image-editing tool for any camera owner. It’s now a strong rival to Adobe Lightroom. Like Lightroom, it can import your images into a centralised, searchable database and then apply non-destructive adjustments and preset effects. Your original images are never directly modified, and the changes are only made permanent when you export processed JPEG or TIFF versions. But there’s more to this program than the bare specs suggest, because Capture One Pro’s raw conversions are quite superb, often extracting visibly sharper detail, with less noise, than Adobe Camera Raw. The editing workflow is powerful but logical and its layer-based localised adjustment tools are excellent. Downsides? It does support external editors, but not plug-ins. 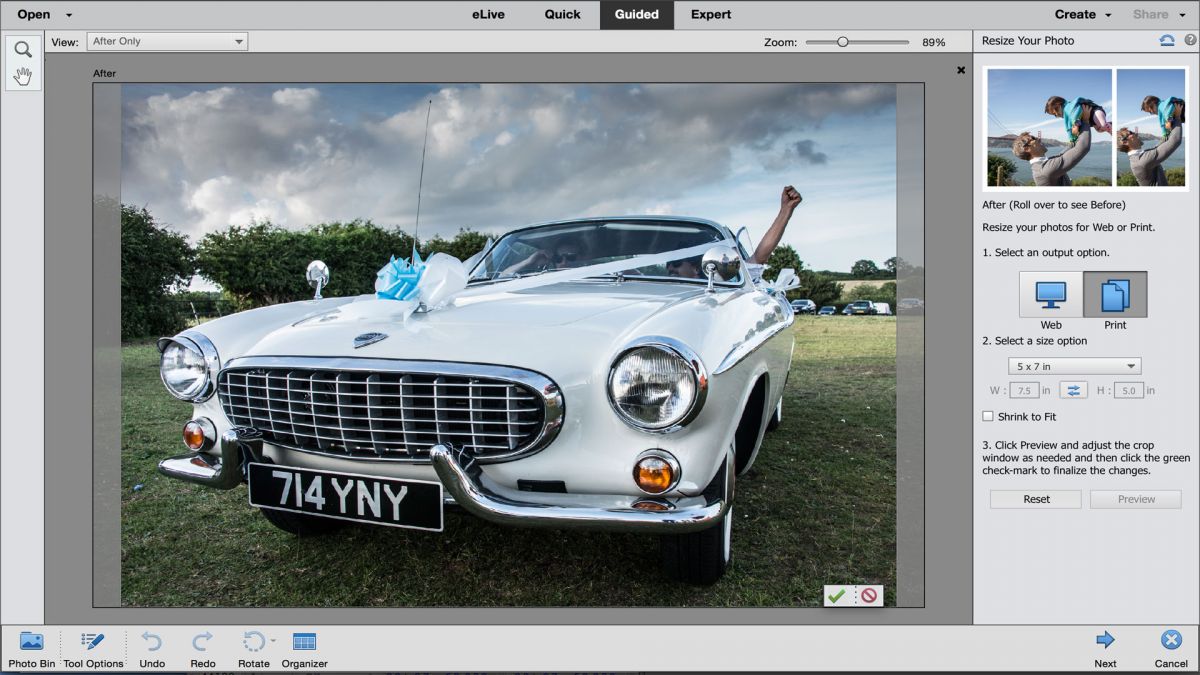 Elements is a great image-editing tool, but version 14 brings just a handful of changes

Photoshop Elements is like the ‘amateur’ version of Photoshop. It’s a lot more novice-friendly, but you do miss out on a lot of Photoshop’s more advanced features. Elements’ big draw used to be the massive price differential, but you can now get a year’s subscription to Photoshop CC and Lightroom for not much more than the price of an Elements licence. Elements’ main strength is its ability to cater for all kinds of user, but the novice-orientated interface can grate, the editor lacks proper curves adjustments and the version of Adobe Camera Raw that’s included is a bare-bones, cut-down version of the real thing. Version 14 adds a de-haze tool, shake reduction, new guided edits and sundry other enhancements, but it’s a routine annual refresh rather than a new program. Elements 14 is great for newbies and non-professionals, but its cost advantage has been eroded by Adobe’s Creative Cloud Photoshop and Lightroom deal. 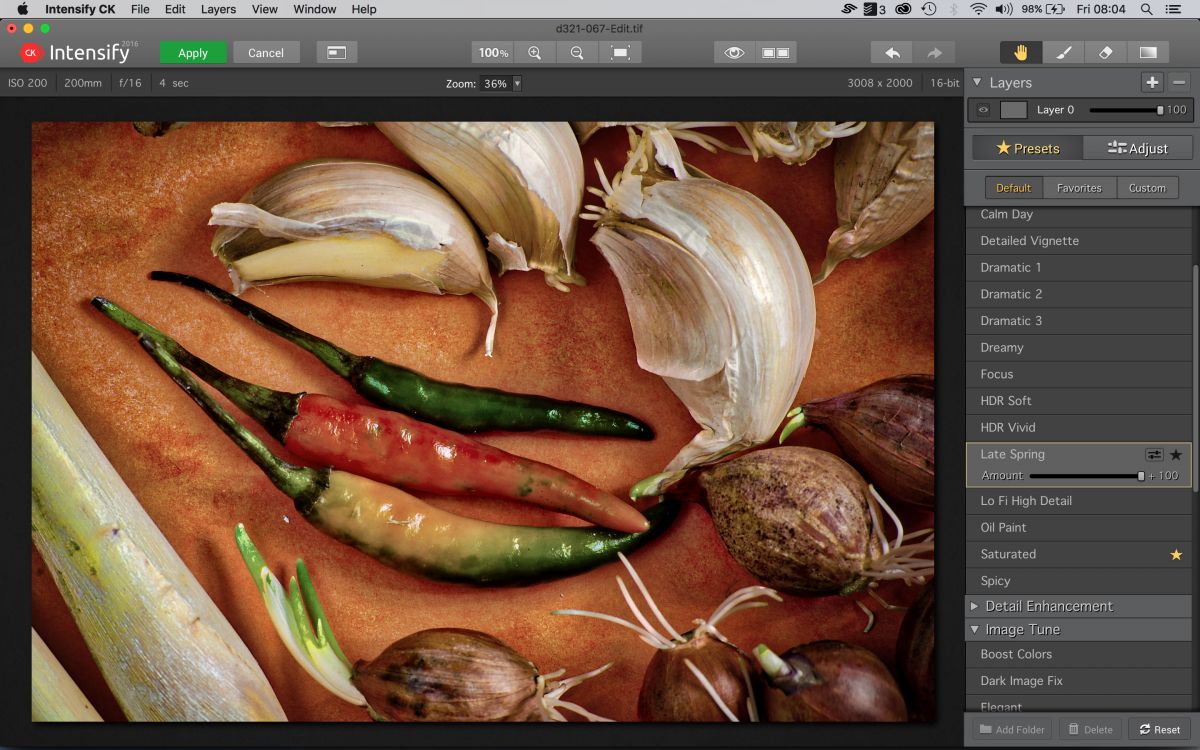 This Mac-only suite is a clever, modern creativity-booster

Don’t be fooled by that cheesy ‘MacPhun’ pun-making. This company makes properly powerful software that combines single-click presets that anyone can use with powerful back-end adjustments for enthusiasts and experts. You get a collection of programs that can work as standalone tools or as plug-ins for Photoshop, Lightroom or Aperture (if anyone is still using it). Noiseless and Snapheal are easy and effective tools for noise and object removal respectively, while Intensify adds contrast and drama to your pics and Tonality is really rather good at creating mono/retro effects. Focus is good for bokeh and tilt-shift effects, while FX Photo Studio’s in-your-face photo effects reveal unexpected subtlety and depth. Available on their own from the App Store, these make most sense bought in the Creative Kit 2016 bundle straight from the MacPhun website. 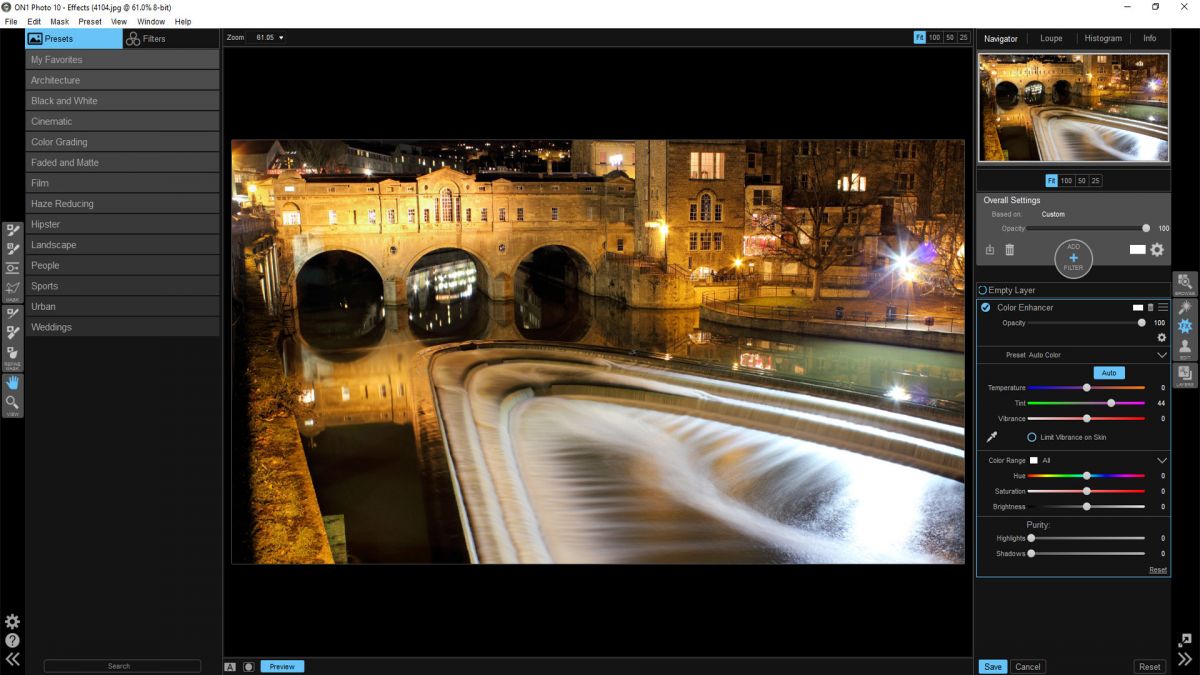 ON1 enjoyed years of success with its collection of Photoshop plug-ins, before going on to wrap them up together as a standalone, self-contained ‘PhotoSuite’ of apps. The new edition, renamed as Photo 10, streamlines the process. The complete set of tools in ON1 Photo 10 combines quick and easy edits based on a powerful range of preset enhancement, corrections, effects and filters, to good portrait retouching facilities and versatile export options. Its main strength is in its incredible array of effects, which combine a barrage of presets with fine-tuning possibilities. The layers system adds to the overall prowess of the package, going beyond what’s available in Lightroom, although Photoshop still has a significant lead in the elegance, sophistication and sheer power of its manual editing facilities. Even so ON1 Photo 10 is a smart all-rounder and is good value at the price. 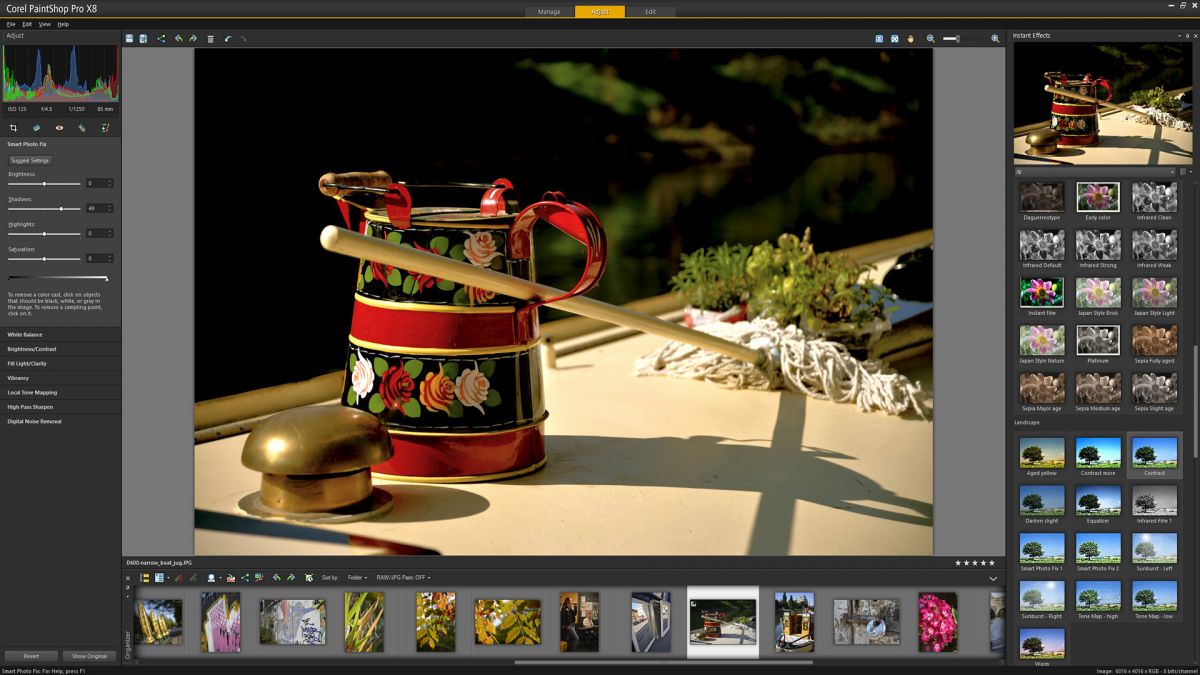 PaintShop Pro’s aim is to rival Photoshop’s versatility and image editing power, but to be easier to use and cost a fraction of the price, and almost all of Photoshop’s most useful tools have an equivalent in PaintShop Pro, and though they often work slightly differently, it doesn’t take long to adapt, especially with help from the Learning Centre. However, even with version X8’s speed enhancements, some tools can be frustratingly sluggish, and then there’s price to consider. Back when Photoshop cost a hefty one-off payment, PaintShop Pro could indeed be had for a fraction of the price. However, these days an Adobe Creative Cloud subscription for Photoshop and Lightroom costs just £8.57/$9.99 per month, which over a year isn’t significantly more than the £79.99/$99.99 cost of PaintShop Pro, especially if you upgrade PaintShop Pro annually. 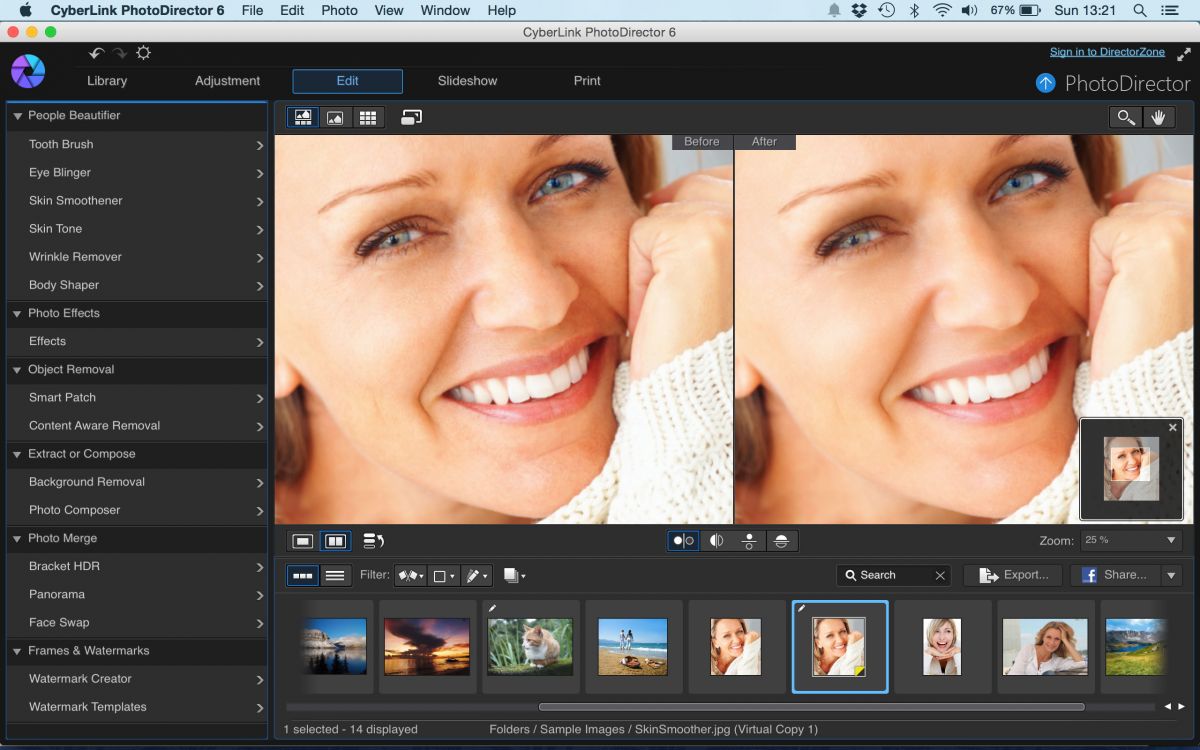 PhotoDirector 6 is like a third-party homage to Lightroom, but with some twists of its own

Lightroom has clearly had quite an influence on software developers, because PhotoDirector 6 mirrors almost everything it does, with a workflow split into Library, Adjustment, Edit, Slideshow and Print panels. The Adjustment module is equivalent to Lightroom’s Develop module, and even offers more or less the same tools, right down to its graduated and radial filter effects. But PhotoDirector takes a step further in its Edit panel, offering a whole host of effects not available in Lightroom – though these are mainly aimed at amateur users, including a whole section on ‘Beautifier’ and ‘Reshaping’ tools. But PhotoDirector is missing Lightroom’s depth – and it doesn’t support external editors. 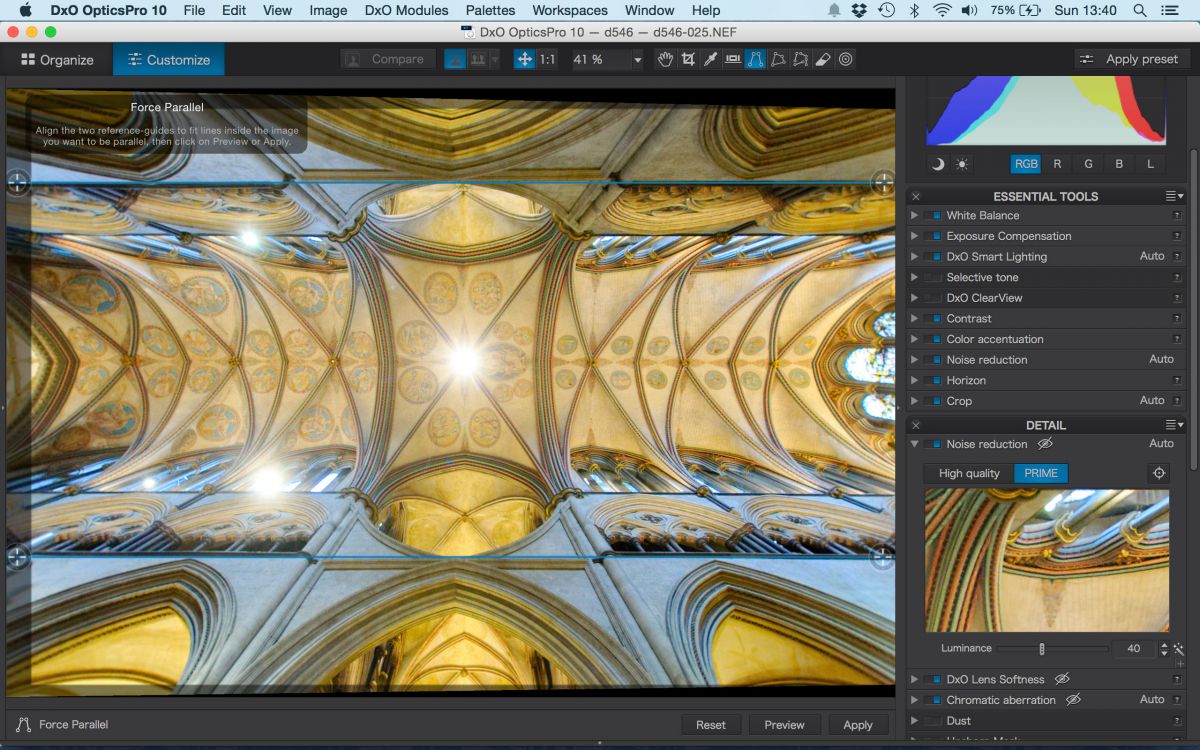 All raw conversion tools are not the same, and DxO Optics Pro is the perfect example. Optics Pro started out as a tool for correcting the distortion, chromatic aberration, edge softness and vignetting that almost all lenses exhibit, using lab-developed correction profiles. It’s been extended to include sophisticated raw conversion tools for getting the maximum definition, dynamic range and colour information from your pictures. It does offer a range of tone and colour adjustments, but no localised adjustments. On the plus side, it produces superb results. On the downside, you will still need other tools for manipulating and organising your images. 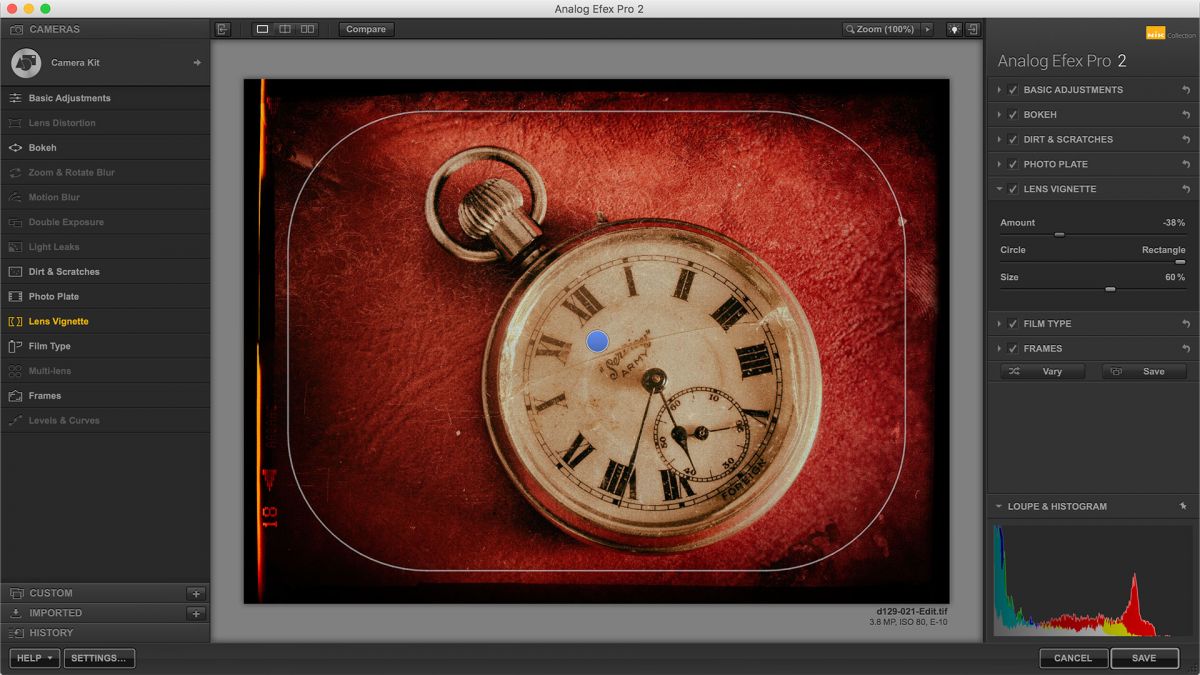 They’re great, but are Nik Software’s premier plug-ins being neglected?

Nik Software built some of the most brilliant plug-ins available, and when the company was taken over by Google they were made available as a single suite at much lower price. But since then, development has stalled and apart from the rather good Analog Efex Pro retro effects generator, there’s been nothing new. Color Efex Pro is still an amazing repository of inspirational effects, Silver Efex Pro is arguably still the best mono plug-in there has ever been and HDR Efex Pro is a versatile and straightforward HDR tool. Dfine’s noise reduction tools and Sharpener Pro are perhaps past their best and Viveza’s scope is modest, but this is still an extremely compelling plug-in suite for both PC and Mac owners. You just have to hope it’s in the right hands.

0 0 0
Previous ArticleIf you hate someone, give them a 3D naked replica of themselves
Next ArticleWindows 10's next major update could tie in new hardware
Comments (15)

Don't miss a deal at Sephora
Best offers at EBay DE
Discounts, Sales and Deals at Ticketmaster UK
Save your money with Boohoo
Online-Shopping with Sky
Best products at Microsoft Store
Latest Posts