Unsurprisingly, however, some extreme slimming has some knock-on effects. Take the ultra-slim bezels: these look smart and help keep the total dimensions low, but because they don’t leave room for a webcam, this has to be shunted on to the base. The Swift 7’s camera thus has a pretty neat pop-up design, allowing for privacy when not in use, but the low angle shows more of the user’s chest than their face.

We’re also slightly concerned about how the base flexes slightly when picked up from a corner. A bit of bendiness is common on ultra-thin laptops, but that mainly occurs around the screen, not the base. That’s not to say the Swift 7 is poorly made, as it comfortably endured multiple commutes, but its slimness does contribute to a certain lack of solidity.

More positively, Acer has found room for a fast and reliable fingerprint sensor. This is integrated into the power button, which sits just to the left of the keyboard.

This keyboard, admittedly, takes some getting used to. The keys are backlit and most are a decent size, but there are some major exceptions. A tilde key, for example, is crammed between Caps Lock and the A key, making the former infuriatingly undersized and difficult to land when touch-typing. Backspace also loses a chunk of itself to a Delete key, while Enter has been bisected to make room foraBackslash key.

It took us days to acclimatise to these quirks, and while it’s true that we eventually did, this is still a case of the Swift 7’s downsizing having an adverse side effect. The touchpad, which is exceedingly wide but very short, also initially seemed in danger of a similar fate. Thankfully, while we sometimes brushed a finger against the top edge, this isn’t anywhere near as offputting as the keyboard’s misshapen keys. The smooth surface and dependable responsiveness of this touchpad makes it perfectly fine as a primary input, even if it is somewhat squat.

The 1,920×1,080 touchscreen also meets a very high standard. The IPS panel confers both wide viewing angles and vibrant, yet accurate, colours: sRGB coverage is closer to good than great, at 93.4%, but we measured an average delta-E of just 1.42, so the colours you see are being reproduced faithfully.

A respectable peak brightness of 329.6cd/m2 also helps alleviate the reflective effect of the screen’s glossy finish, and the 1,502:1 contrast ratio isn’t bad either. There’s really nothing to complain about, display-wise. 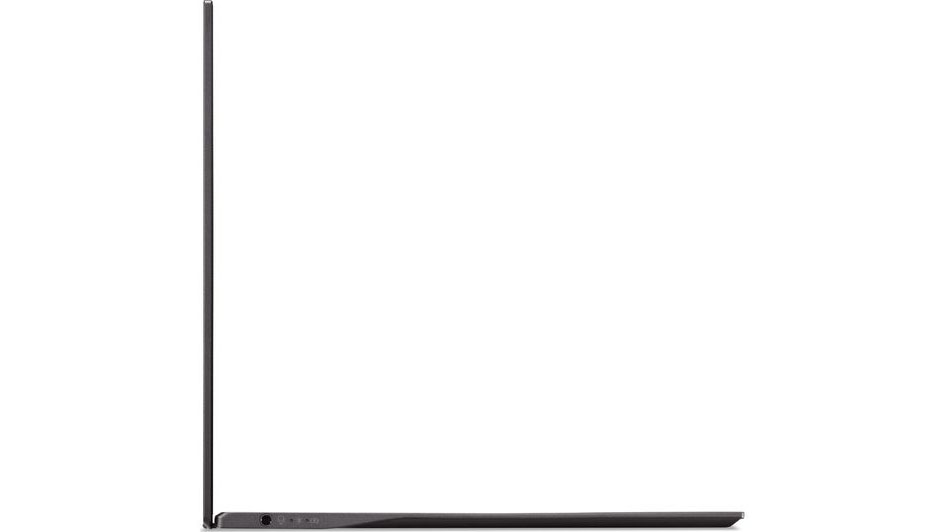 Internally, the Swift 7 packs an Intel Core i7-8500Y CPU, 16GB of RAM and a 512GB SSD. To be blunt, £1,749 is an almost galling amount to ask for something with a dual-core Y-series processor, but then we suspect the Swift 7 is so thin that anything more powerful – in other words, anything that would require additional cooling – wouldn’t fit.

Either way, don’t expect to cruise through demanding productivity software. The Swift 7 managed a passable 65 in our 4K benchmarks’ image test, but scores of 35 in the video test and a paltry 9 in the multitasking test brought its overall score down to 27. That represents a mere fraction of the performance offered by Intel U-series ultraportables such as the Dell XPS 13 and Asus ZenBook 14 UX433FA.

It’s hard to recommend running anything more demanding than browsers and basic office applications, as multithreaded applications will slow the Swift 7 right down. The integrated Intel UHD Graphics 615 can’t cope with games, either, only averaging 15fps in Dirt Showdown, even at 720p, with only the High quality preset.

The 512GB SSD is also unremarkable by modern NVMe standards. Its capacity may be reasonable, but we only recorded sequential read and write speeds of 1,350MB/s and 687MB/s respectively.

Battery life is at least adequate. The Swift 7 lasted for 9h 17m in our video playback test. We noticed it draining a lot quicker when used at full brightness – our benchmark runs at 170cd/m2 – so turn it down and you’ll be able to eke out a few extra hours.

Another drawback of the skinny frame is the lack of connections: you only get two USB Type-C ports and a 3.5mm audio jack. To Acer’s credit, both USB-C ports support Thunderbolt 3, so you’ve got video output capability, and there’s also a little hub bundled in that includes a USB3 port, another USB-C port and a full-size HDMI output all in one.

Still, there’s also the matter of the power cable connecting via one of those very same USB-C ports, so you’ll always be down one when recharging.

Once the initial thrill of using a sub-900g laptop wears off, it’s clear that the Swift 7 mainly suits a very specific type of user: one who will only be performing relatively basic tasks, but still wants something as thin and light as it’s possible to get without massively reducing the display size.

0 0 0
Previous ArticleiPhone 12 range might not have a brand new design after all
Next ArticleHuawei CEO and Founder Ren Zhengfei Says US May 'Escalate', but Confident on Business
Comments (0)

Don't miss a deal at Marks and Spencer
Best offers at Surfdome
Discounts, Sales and Deals at Vimeo
Save your money with Sky
Online-Shopping with H&R Block
Best products at Virgin Media
Latest Posts