The 3rd Gen Moto G is our all-time favourite budget smartphone, but now it’s time for the fourth generation Moto G to take over. Officially announced this morning, the Moto G4 (no confusing 4th Gen prefix this time) takes yet another axe to what we’ve come to expect from budget smartphones.

It’s a beast of a phone, and not just in terms of its specs. With a massive 5.5in, 1,920×1,080 resolution display, the Moto G4 positively dwarfs the 3rd Gen model, putting it firmly in phablet territory along with other jumbo-sized phones like the Vodafone Smart Ultra 6 and the LG Stylus 2. 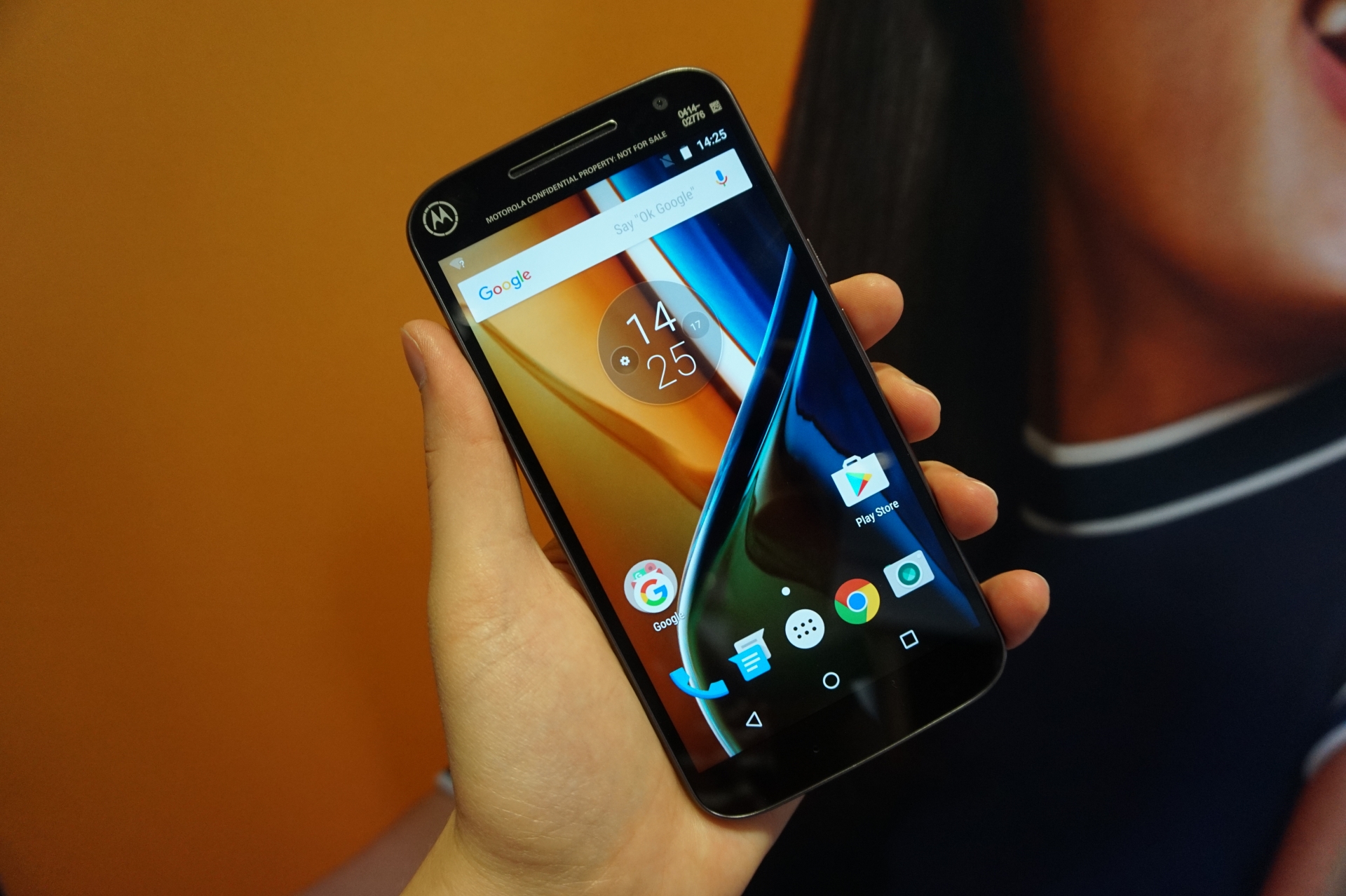 That’s a long way from the 5in, 1,280×720 3rd Gen Moto G, but the incredible thing is that the Moto G4 will only cost £10 more at launch than the 3rd Gen Moto did this time last year. Available for just £169, the Moto G4 looks like it will be an absolute bargain when it launches in early June, as it not only has a fantastic looking display, but its octa-core 1.5GHz Qualcomm Snapdragon 617 processor and 2GB of RAM will also provide a significant step-up in terms of speed and overall performance.

Admittedly, its textured rear isn’t quite as eye-catching or appealing as the ribbed finish on the 3rd Gen model, and the grey shells on our hands on samples looked decidedly bland in the flesh. It will, however, be available to customise through Motorola’s Moto Maker service online, where you’ll not only be able to change the colour of your handset, but also configure it with more RAM and storage, giving it more personality than the non-descript grey models you’ll probably be buying at retail. 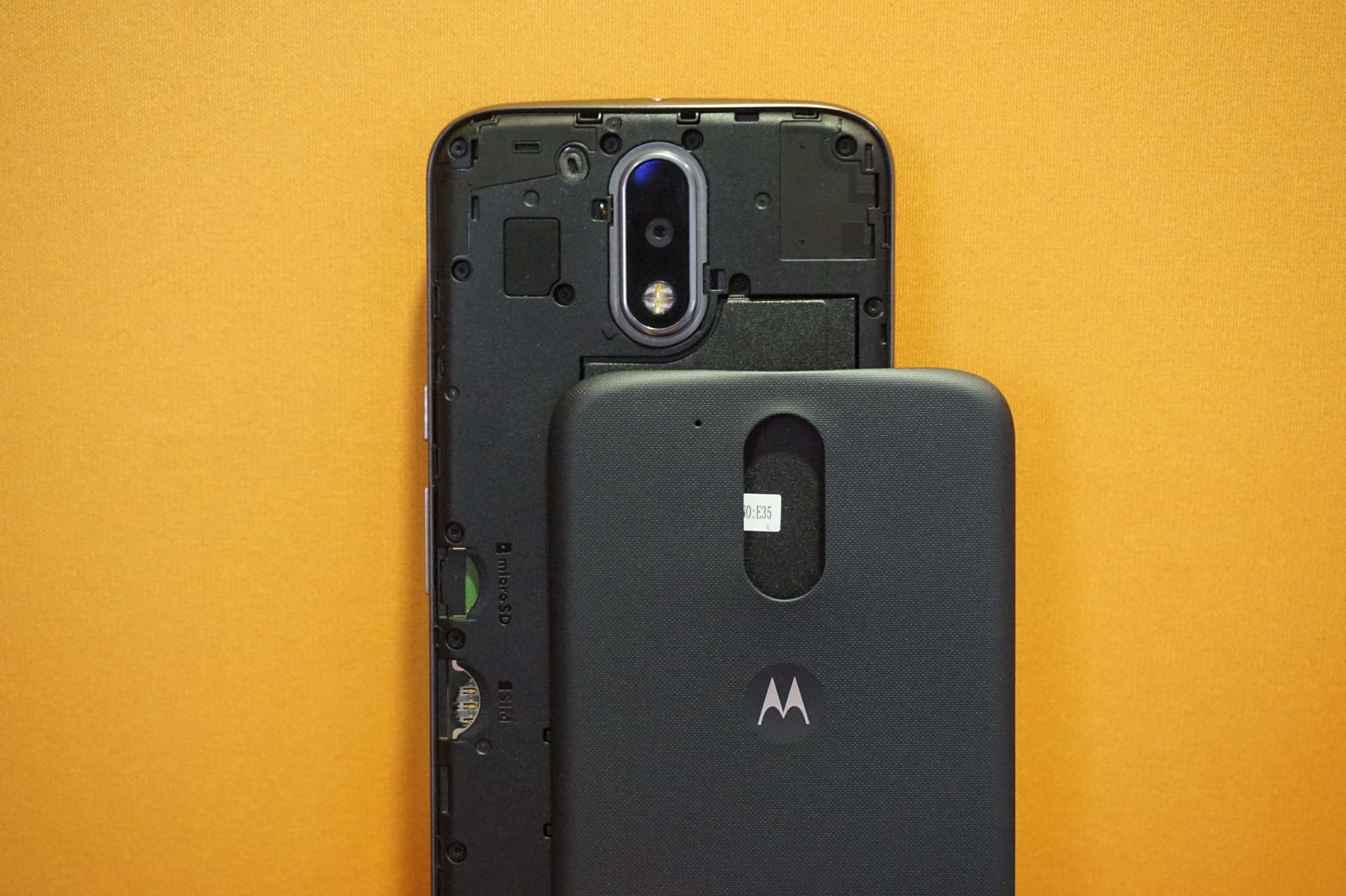 The only thing that hasn’t really changed is the camera resolution, as the Moto G4 still has a 13-megapixel rear sensor. It does, however, have brand-new software, including a Professional mode that lets you tweak the white balance, ISO, focus and exposure levels via an onscreen slider. Sadly, I wasn’t able to take away any of my test shots, but I’ll be trying this out in full once I get my hands on a review sample.

Another piece of good news is that the Moto G4’s 3,000mAh battery will support Motorola’s TurboPower technology, which until now was only available on its higher-end Moto X handsets. Provided you use Motorola’s charger (which sadly doesn’t come in the box), you’ll allegedly be able to get 6 hours of power in just 15 minutes, which should be extremely handy for topping up just before you head out the door. 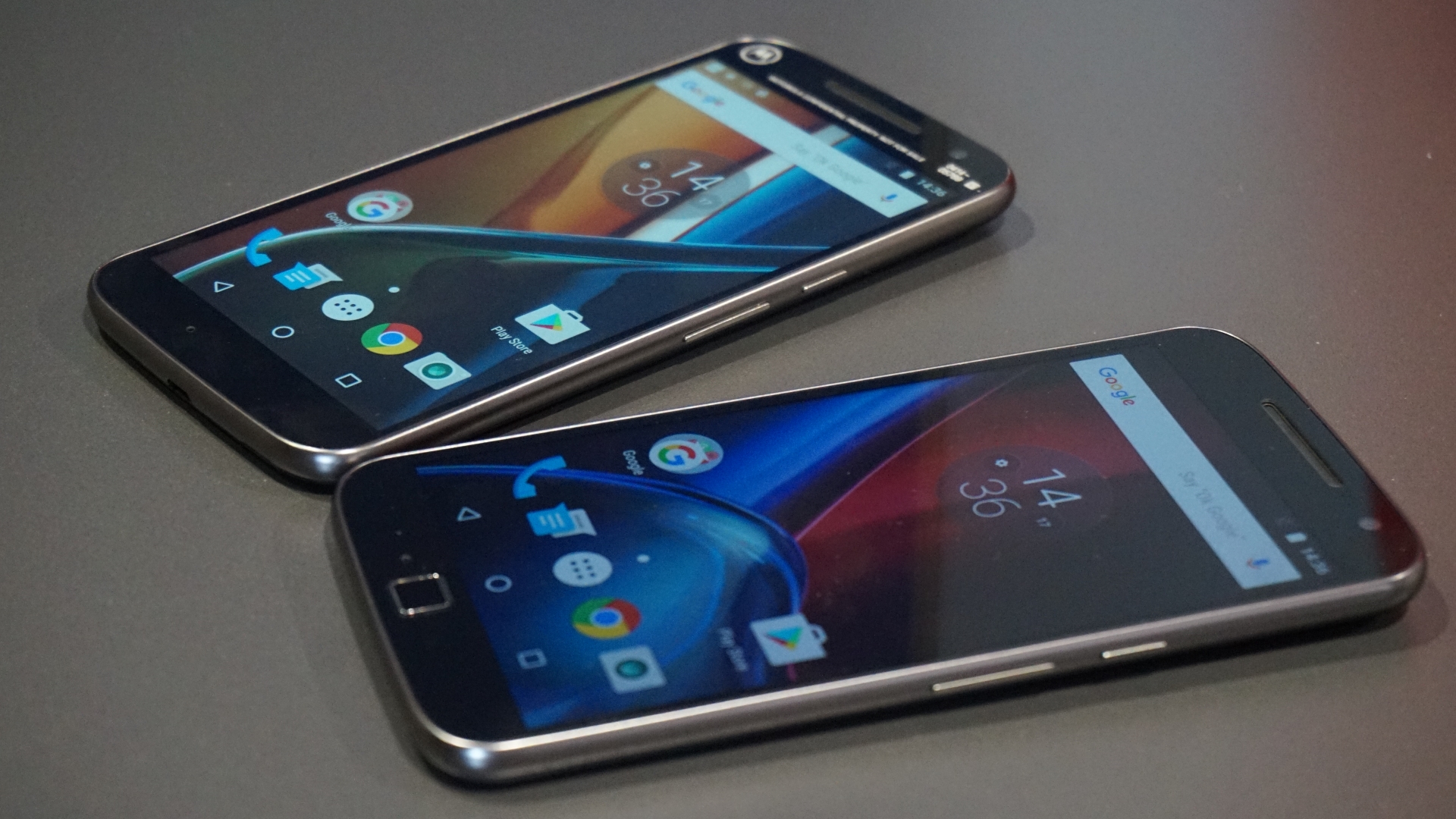 The Moto G4 isn’t the only Moto G phone you’ll be able to buy this year, though, as Motorola has also launched the Moto G4 Plus. Don’t be deceived by the name, though, as this is practically identical to the regular Moto G4 in almost every way – including its size. In fact, the only ‘plus’ element is the price, as the Moto G4 Plus will cost £199 and launch in mid-June a couple of weeks later.

Instead, the main difference is its rear-facing camera. This has a larger 16-megapixel sensor as well as laser and phase detect autofocus, allowing it to snap on to targets much quicker than the regular Moto G4. It still has all the same software features, though, including the Pro mode, so it will be interesting to see how the two cameras differ once we get them in for review. 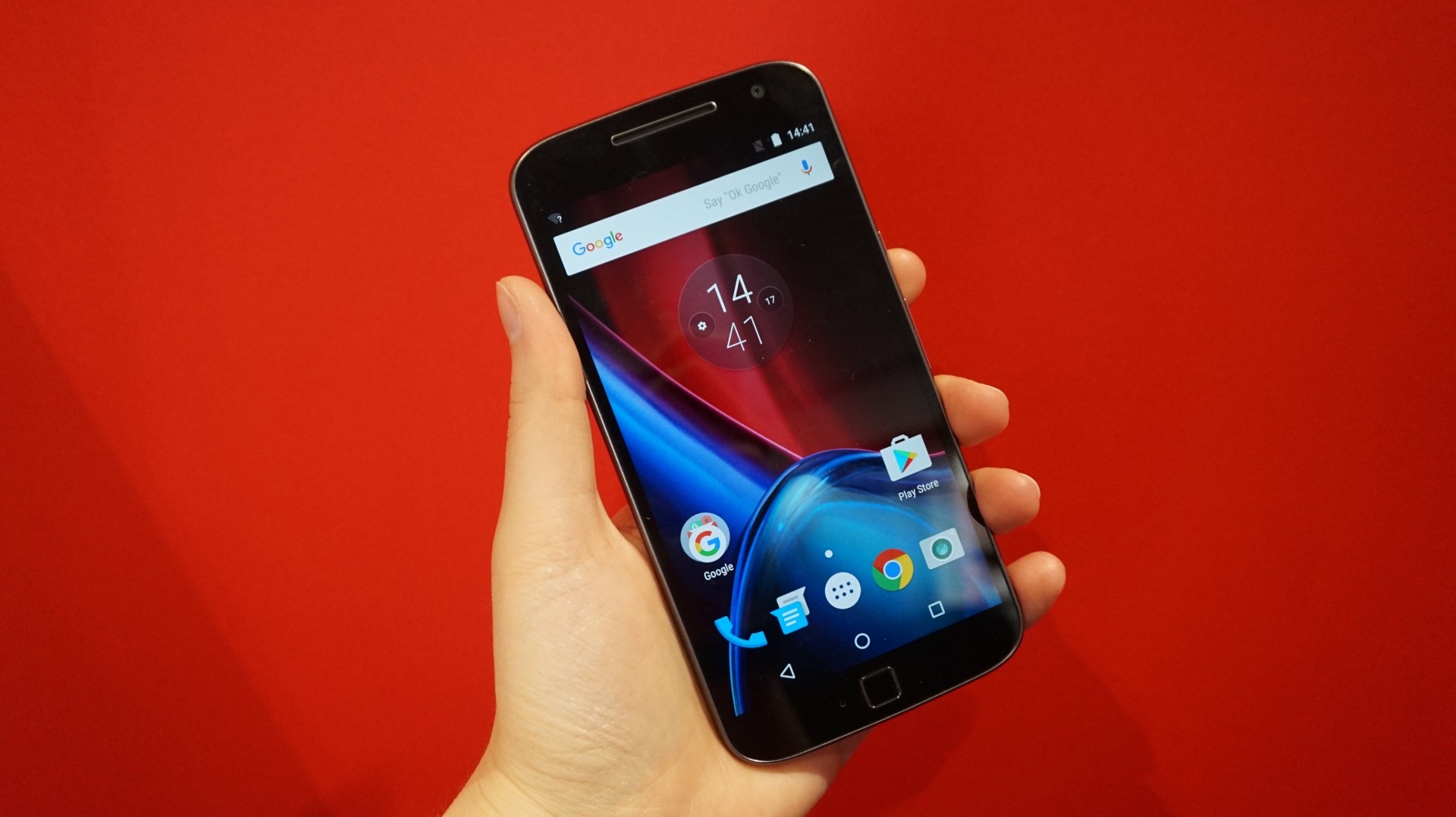 The Moto G4 Plus also has a front-facing fingerprint sensor in the form of a small square nub below the screen. While I generally prefer rear-facing fingerprint sensors, it’s still great to see one appear on such a cheap phone, and I’ll be putting it through its paces as soon as I can. It also comes with one of Motorola’s TurboPower chargers in the box – something you’ll have to buy separately with the regular Moto G4.

The only noticeable omission from the Moto G4 and Moto G4 Plus is its lack of waterproofing. This was one of the key features on the 3rd Gen Moto G, but this year’s models are simply water repellent thanks to its layer of nano-coating. This means it should still survive the odd rain shower or splash of water, but dunking the phone in a tub is likely to spell a watery end for your handset. 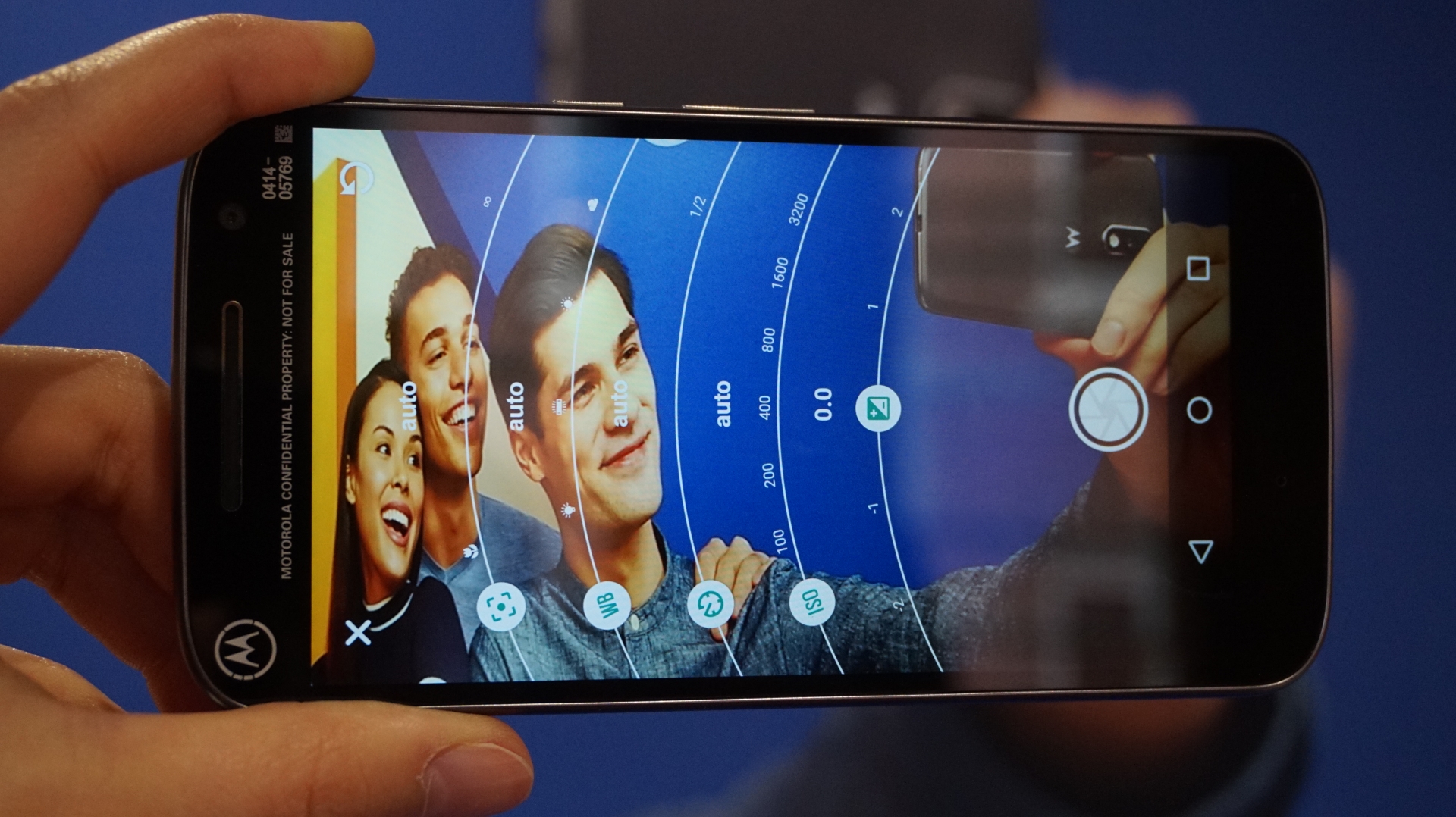 Still, while its size may not be for everyone, there’s no denying that Motorola has once again set a new benchmark for all budget smartphones going forward. With specs to rival most mid-range handsets that are twice the price, other manufacturers will no doubt be quaking in their boots come June time. We’ll bring you our final verdicts as soon as we can.

0 0 0
Previous ArticleGOOGLE IO: At last! Here's when Project Ara modular phones are coming out
Next ArticleMicrosoft Display Dock review - can your phone replace your laptop?
Comments (0)