Microsoft Display Dock review – can your phone replace your laptop?

Microsoft’s superb Display Dock is a glimpse into the future of mobile working, but you need the sluggish Lumia 950 or 950 XL to use it

Last month, we got to grips with Windows 10 Mobile and all of its brand-new features, from its universal apps to Microsoft’s new eye-scanning security software, Microsoft Hello. Now, we’ve finally had a chance to test Microsoft’s official Display Dock, the optional £80 adaptor you’ll need to use Windows 10 Mobile’s biggest and most exciting feature, Continuum, which effectively turns your smartphone into a portable PC.

At the moment, Continuum only works on the Lumia 950 and Lumia 950 XL, as it requires USB Type-C to connect your phone to the Display Dock (a cable is supplied for this). It’s highly likely that future Lumia handsets will also come with Continuum support. Sadly, the Display Dock isn’t compatible with any existing, older Lumia phones.

Once you’ve connected the 950 or 950 XL to the Display Dock, you can then plug it in to an external monitor via its HDMI or DisplayPort output and run a full PC-like desktop experience using the hardware inside your smartphone, allowing you to use fullscreen apps like Outlook, Office, Edge and Maps without the need for a PC or laptop. Even better, you can still use your phone while it’s connected to the Display Dock, meaning you don’t have to stop what you’re doing to answer a call or reply to a text. 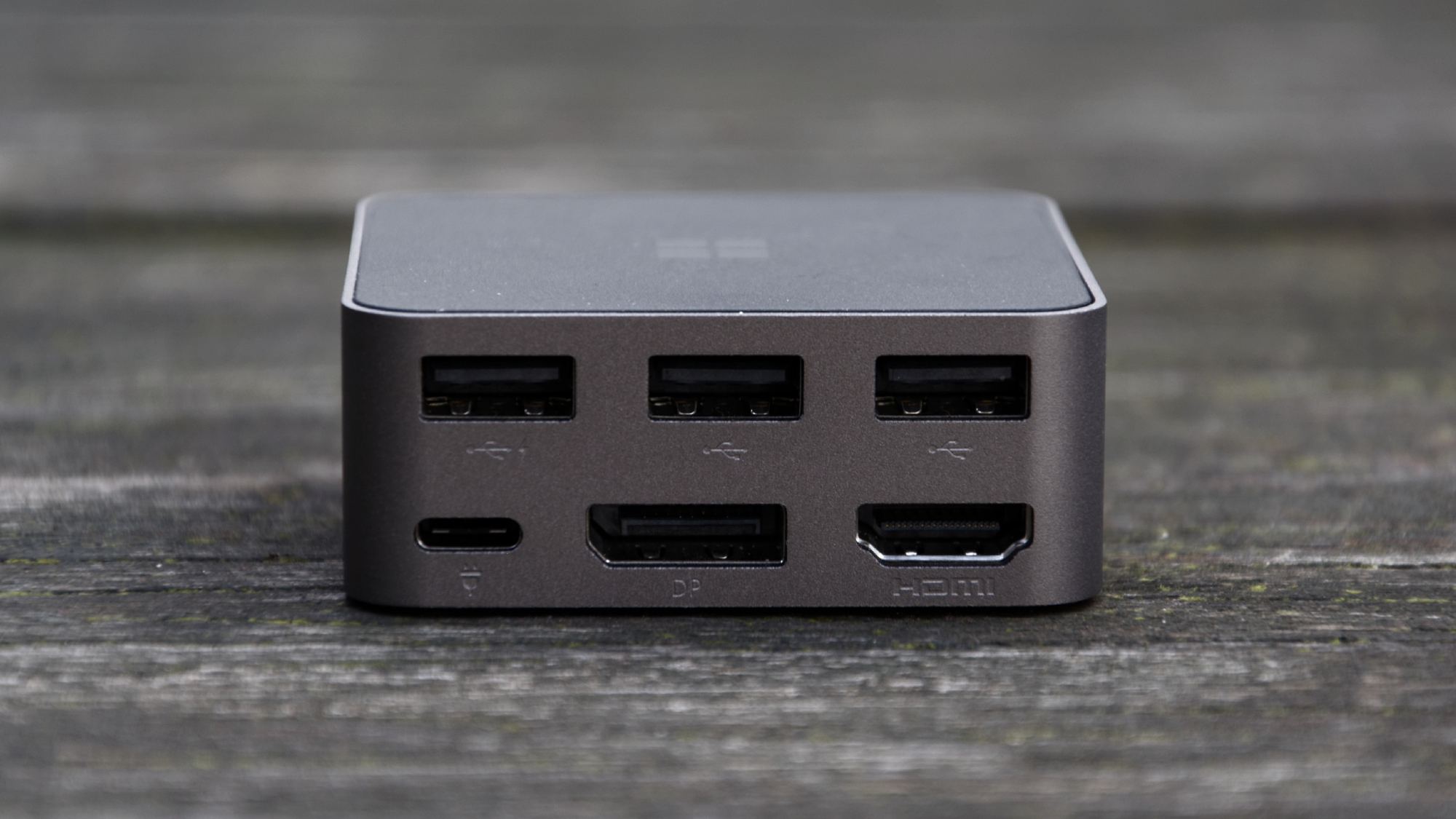 In addition to its two display outputs, the Display Dock also has three USB2 ports for a wired mouse and keyboard. Bluetooth is also available if you want to cut down on wires. It’s a shame none of them are USB3, but at least you get one which doubles up as a charging port, so you could power another device such as a tablet or battery pack while you work. The USB-C connection also charges your phone, so you don’t need to worry about running out of juice when you’re in the middle of writing an important document. The Display Dock itself is powered via a USB-C port, with a supplied charger to match.

For its size, the Display Dock is surprisingly heavy, weighing 230g despite its small dimensions of 64x64x26mm. As a result, you don’t need to worry about it sliding round your desk with every mouse movement, as its rubbery, soft touch underbelly stays firmly in place even when using a mouse with a relatively short cable. Alternatively, you can use your smartphone display as a makeshift touchpad if you need to free up a USB port, but we’d recommend using a mouse where possible as the lack of tactile feedback on the screen meant we weren’t always sure we’d tapped it correctly. 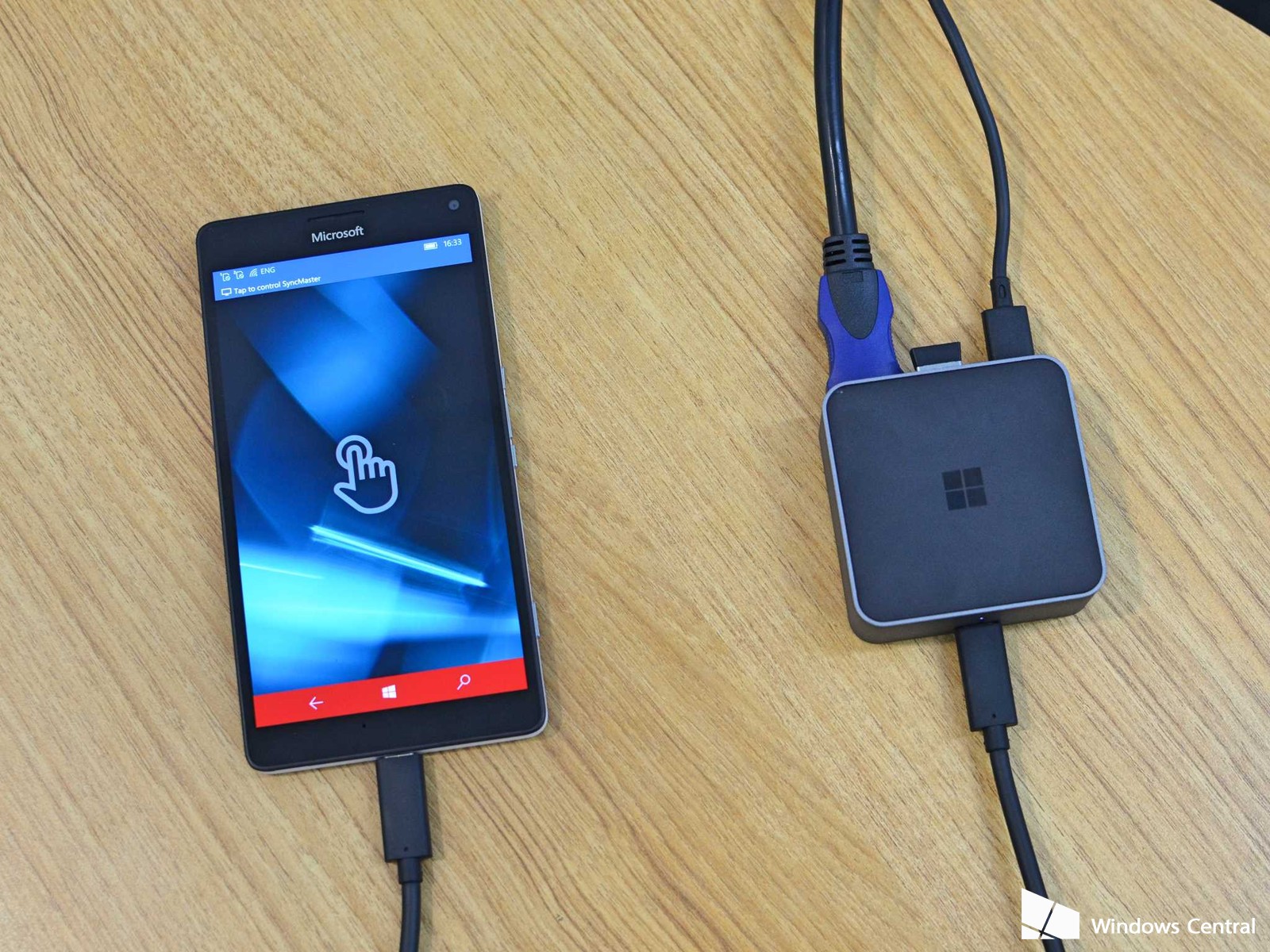 ^ If you don’t have a mouse handy, you can use your smartphone screen as a touchpad instead

However, this is partly exacerbated by the phone’s hardware, as we found that even the Lumia 950 XL’s octa-core 2.0GHz Qualcomm Snapdragon 810 chip and 3GB of RAM weren’t quite fast enough to run Windows 10 completely lag-free on the big screen.

Navigating the desktop was absolutely fine, but trying to switch between multiple pages in Edge quickly became our number one irritation, as it often took a second for it to load and change tabs, no doubt contributing to our general uncertainty when using the phone as a touchpad. Scrolling down pages could also be rather jerky at times, particularly if there were videos present, and web browsing in general was very sluggish compared to your average laptop or PC.

Another one of Continuum’s caveats is that it only works with Microsoft’s universal apps, so there may be several apps you have downloaded on your phone which you can’t use through the Display Dock. That means no Netflix, Skype, Spotify, Twitter or Xbox apps to name just a few until their respective developers make them truly universal. Admittedly, a lack of entertainment apps is less of a problem for office workers, and you can still access services like Netflix through Edge, but considering the Windows Store already has fairly limited app support compared to the Google Play Store and Apple’s App Store, this only narrows down your selection of compatible programs even further. 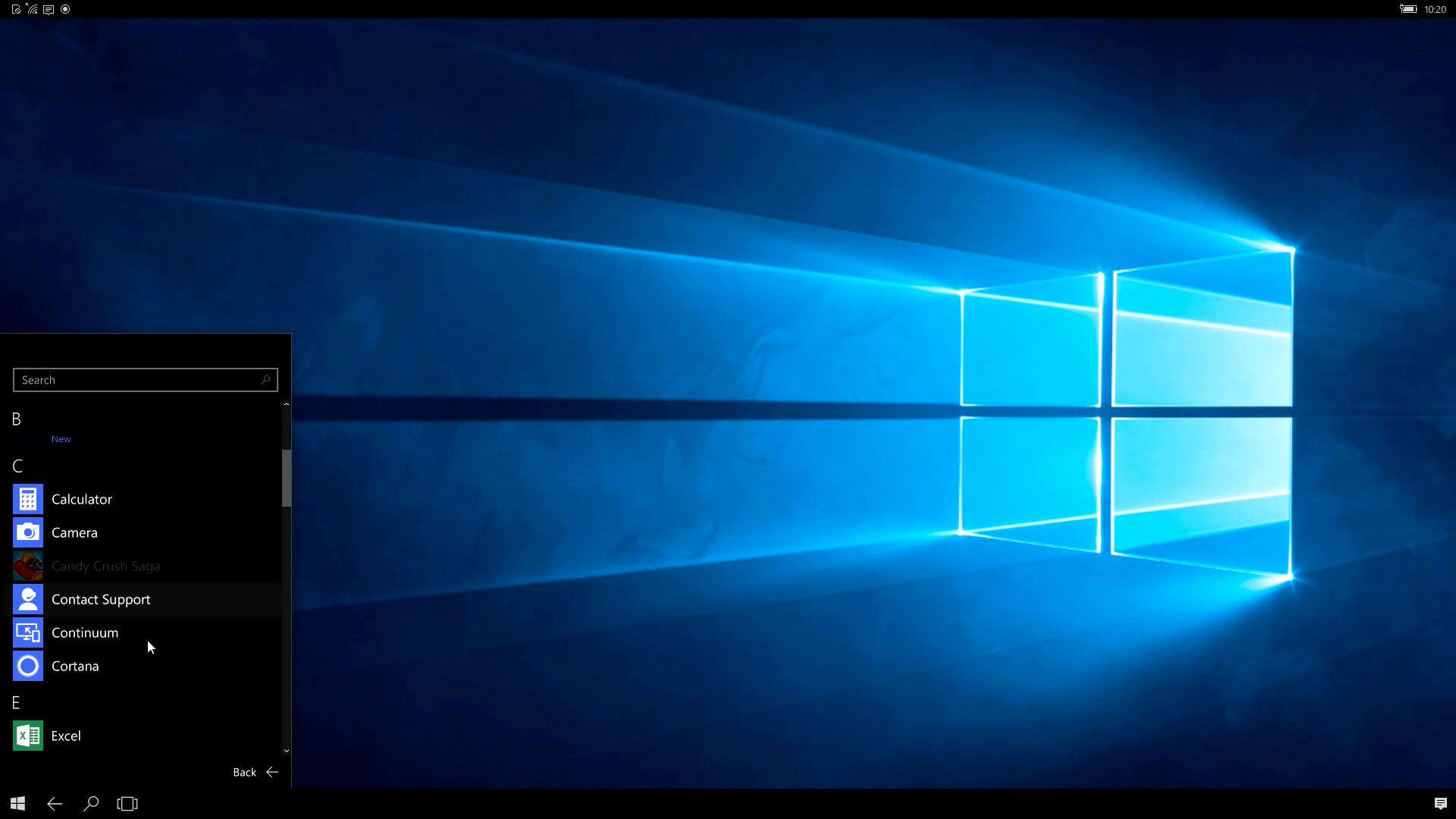 ^ When you first plug in your Lumia 950, you’re presented with a traditional Windows 10 desktop, albeit with a reduced number of icons in the taskbar

Thankfully, key apps such as Word, Excel, OneNote, Outlook and OneDrive are supported, and it’s these which make Continuum really shine. Unlike Edge, we had no performance issues while typing out Word documents or working on Excel spreadsheets, and in many respects it was just like working on a laptop.

You can also use the File Explorer app to open Full HD videos, pictures, documents, downloads and music files on your smartphone’s internal storage or any files you have stored on a USB stick. 1080p video works a treat, too, as we were able to play the Full HD version of our usual open-source test movie (Tears of Steel) without any stutter or lag whatsoever. 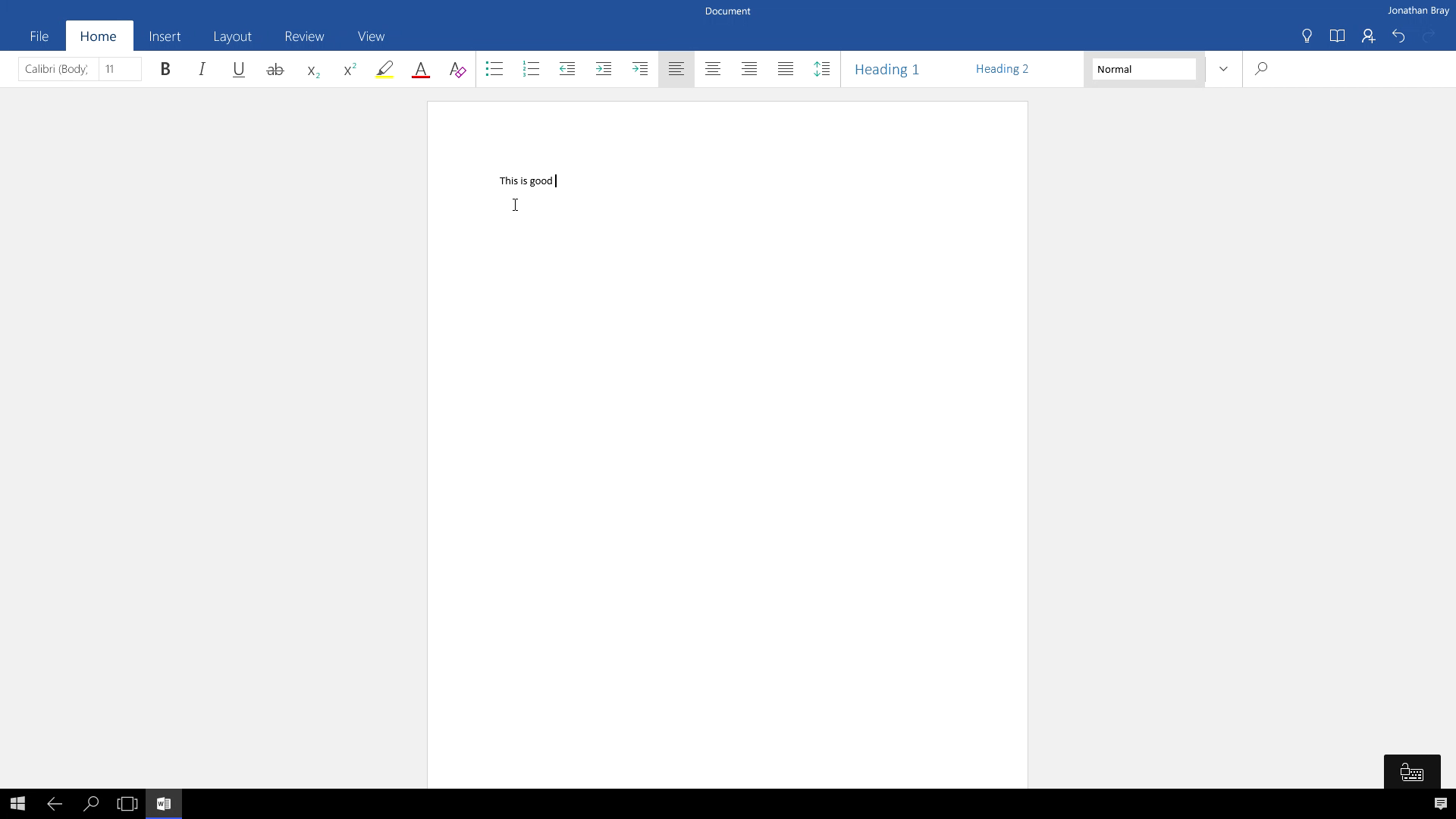 ^ Word works beautifully over Continuum, and gives you exactly the same tools as its mobile counterpart

Web browsing issues aside, Microsoft’s Display Dock could potentially revolutionise mobile office working. When all your basic office apps can be run off your phone, the need to carry around a laptop all day practically becomes non-existent. Of course, there’s a fair amount of infrastructure that needs to be in place before we get to the stage of simply plugging in our phones and getting down to business, but provided your workplace has the correct monitor, cables and accessories, then Continuum has huge possibilities.

The only real problem with the Display Dock is that it essentially forces you to use either the Lumia 950 or Lumia 950 XL as your main handset. As we discussed last month, the Lumia 950’s day-to-day operation isn’t quite as smooth as we’d expect from a £420 phone, and even the £470 Lumia 950 XL isn’t as slick as its Snapdragon 810-based Android rivals.

The XL is still a good phone, and in our testing we found the quality of its display, camera and battery life are all equal to, if not better than, the regular Lumia 950. But when it’s dogged by so many daily irritations, it’s hard to recommend it and, in turn, the Display Dock, over other flagship smartphones. Continuum is certainly a big point in its favour, and we’d definitely choose the XL over the regular 950 as our Windows 10 handset of choice, but you’ll need to be prepared for a rather rocky transition if you’re making the jump from Android or iOS.

Don't miss a deal at Sephora
Best offers at Sky
Discounts, Sales and Deals at Carphone Warehouse
Save your money with Go Daddy
Online-Shopping with EBay DE
Best products at Ancestry
Latest Posts