The general convention has always been that soundbars deliver better audio than your TV’s speakers, but that they’re no match for a proper surround-sound system with 5.1 or 7.1 speakers.

Yamaha put paid to that argument with last year’s YSP-2500. Using directional sound beams to bounce audio off the walls and wrap around you, the company delivered surround sound without the mess of cables and speakers.

Now Yamaha returns with an improved take on the technology in the YSP-2700. Sixteen drivers deliver sound beams for the surround sound, alongside a subwoofer for bass – and all in, this setup can replicate a 7.1 surround sound system.

This kind of technology doesn’t come cheap, and the YSP-2700 is one of the most expensive soundbars. But if you want high-quality audio without the hassle of a discrete system, this soundbar is the next best thing. 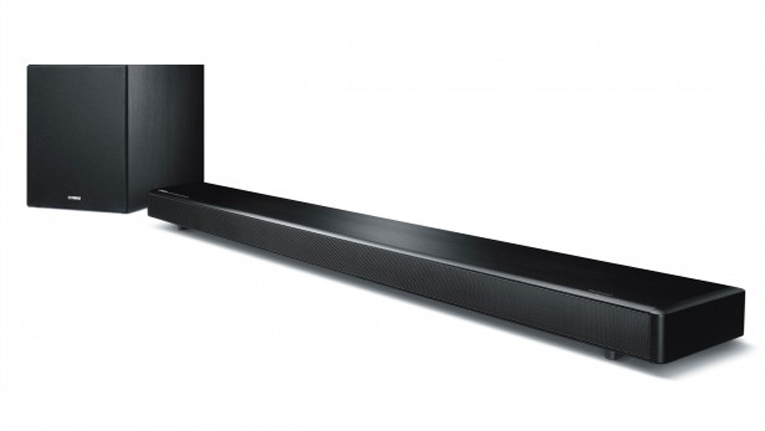 At 944mm, the YSP-2700 is wide and clearly intended to accompany a large TV. It sat neatly in front of my 50-inch set, but wouldn’t look out of place with a larger model. I prefer the look of the YSP-2700 compared to last year’s YSP-2500: angled edges and a jet-black finish give the former a premium look and feel.

I’m also like that the grille covers the entire front of the soundbar, with the LCD screen on the right readable through it. My one minor issue is that the plastic finish picks up fingerprints all too easily, and they’re surprisingly difficult to wipe off. I had to resort to a slightly damp microfibre cloth.

Gone are the slightly fiddly height-adjustable feet used on the YSP-2500. Instead, the soundbar sits almost flat on a surface. If you need height, however, then two attachable stands lift the soundbar up by a couple of centimetres.

In my case, the YSP-2700 fit beneath my TV without the need for the stands – although this raised two potential issues. First, the soundbar doesn’t have an IR passthrough, so it blocked my TV’s remote. Second, the manual advised flipping up the wireless antenna if you use a Wi-Fi network, but this got in the way of the TV screen.

Most homes should be fine with the antenna folded down (I had no connection troubles). If not, an Ethernet connection as provides an alternative – or the 4kg soundbar can be wall-mounted, too, with the optional SPM-K20 mount (around £49). 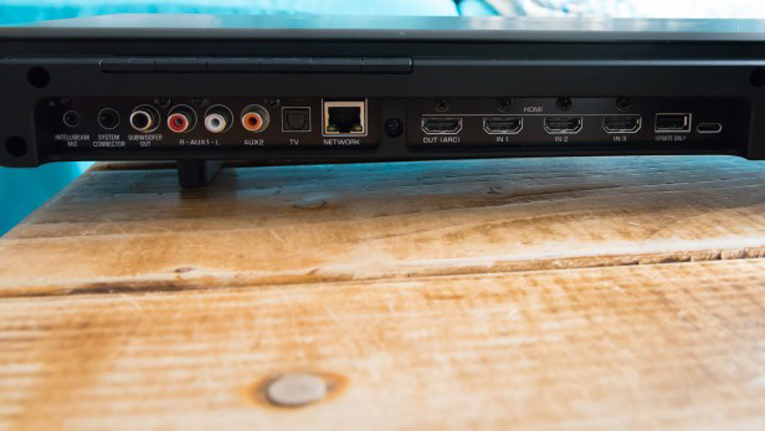 Round the back of the unit, accompanying the Ethernet port are three HDMI inputs (all HDCP 2.2-certified and 4K-compatible), an ARC HDMI output, plus analogue and optical inputs for older devices and TVs. When the soundbar is turned off, the HDMI inputs are automatically passed through to the TV. There’s also a USB service port, an input for the setup mic and a subwoofer connector.

You shouldn’t need the latter, since the subwoofer is wireless, pairing automatically with the soundbar. You should only cable the subwoofer if interference is a problem. Otherwise, there isn’t much to say about the sub: it’s an almost square box (295 x 297 x307mm) that you should tuck out of the way in a corner.

With MusicCast multi-room audio streaming, the YSP-2700 has to be connected to your home network first. If you’re going wireless, the easiest way is to use the MusicCast app (iOS and Android) to connect to the soundbar and join it to your wireless network.

Network connections done, the next job is configuring the sound beams. The YSP-2700 has 16 2W drivers at the front of the soundbar that form the surround-sound beams that drive the audio. Combined with the 75W subwoofer, that’s a total power output of 107W.

Configuring the beams is best done using the automated Intellibeam set-up routine, using the provided microphone. You need a room with clear space to bounce audio around: too large a room with little to bounce sound off, or one cluttered with furniture that could block out audio, can prevent the YSP-2700 working optimally.

In order to use Intellibeam, you’ll first have to build the supplied cardboard stand, so you can place the setup microphone at listening height. You then start the routine, step out of the room and let the soundbar send pulses of audio so it can work out how to configure its beams. The process takes about three minutes to complete, and you can save up to three different configurations for different listening positions. 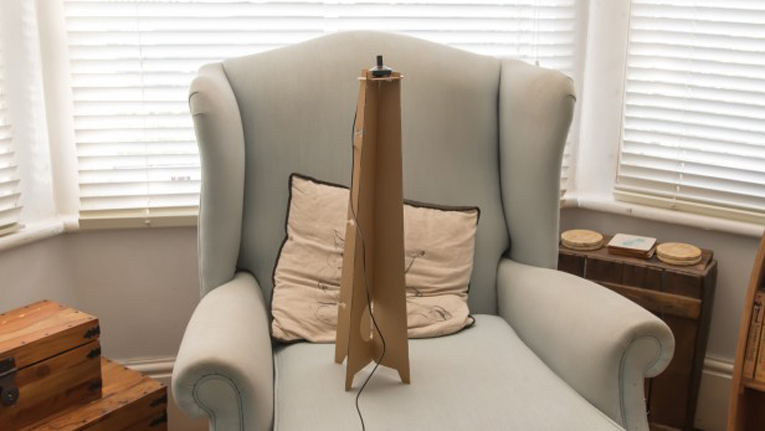 Based on the living room in my Victorian terraced house, the YSP-2700 that a 5.1 configuration was the optimum setting. In a different, more square room, the YSP-2700 opted for full 7.1. You can enable the 7.1 mode if the soundbar picks 5.1, but I felt that in my living room 5.1 sounded better than 7.1.

You’re also offered full control over bass and treble, and you can manually adjust all the beam settings to tweak the sound if you wish. I think the automated setup does the best job. 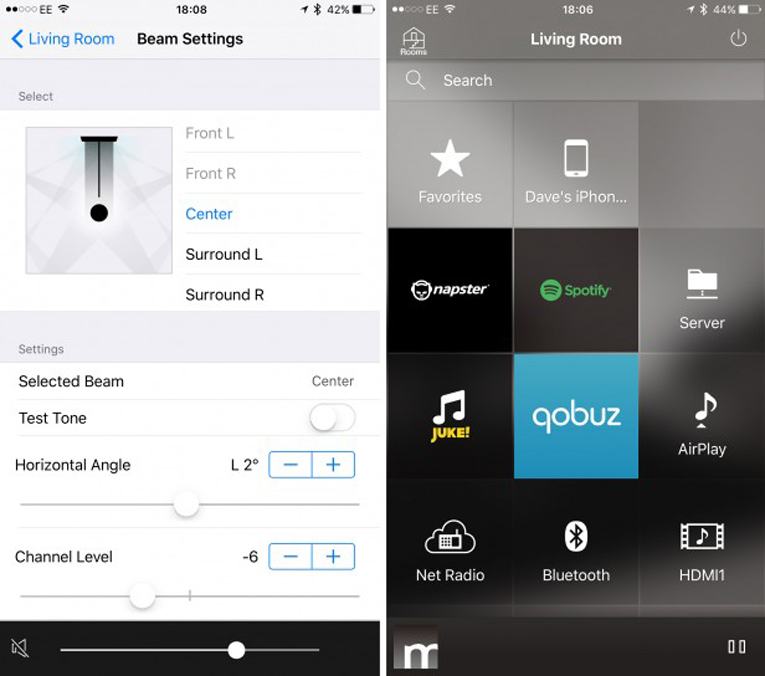 A simple remote control is supplied in the box. It has all the buttons you need to change input, mode and volume, with an on-screen menu that displays all of the information you need. Input, power and volume keys are replicated on the soundbar for convenience. However, I found it easier to fire up the MusicCast app and use that to adjust settings directly from my phone. 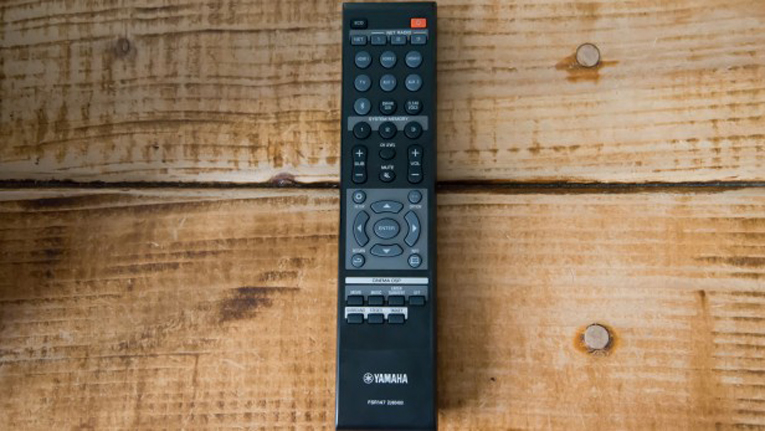 The quick summary is that the YSP-2700 sounds amazing, accurately placing sound all around you. Watching the opening scene from Star Wars: The Force Awakens, the blaster bolts fizzed and whipped straight past me. It’s quite incredible, and you’d swear that there were hidden speakers around the room.

Dialogue is intelligently locked to the front and is clear. There’s a lot of bass in that opening scene, from explosions to Kylo Ren’s lightsaber sound effects, and the subwoofer handles it all perfectly. When it comes to home-cinema systems, balance is key, and Yamaha has perfectly matched the subwoofer to its soundbar.

Crossover is undetectable, with the sub adding the grunt and rumbling seamlessly to higher-frequency sounds. The bass is neither dominating or overpowering. 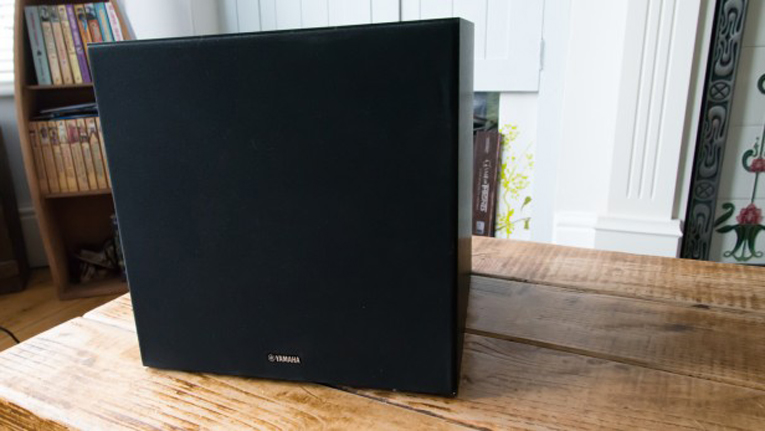 Yamaha has kitted out the YSP-2700 with its usual Cinema DSP sound modes, which process the audio to give it a different feel, such as a thrilling cinematic sound for movies. There are three movie modes (Sci-Fi, Adventure and Spectacle), three music modes (Music Video, Concert and Jazz Club) and four Entertainment modes (Sports, Talk Show, Drama and Game).

Purists will probably be loath to touch Cinema DPS, but the options are surprisingly fun and can add to any material. I loved the Sci-Fi mode, which provided an extra kick to sound effects and made Star Wars feel even more cinematic.

Switching to a film that displays more subtlety, I fired up the Blu-ray edition of Lord of the Rings: The Fellowship of the Ring. All the intricacies of the opening music shone through and brought the Shire to life. But there’s plenty of oomph to step up a gear for the explosions in the firework scene.

The only real downside to the YSP-2700 is that moving too far outside of the main listening position reduces the quality of the surround-sound effect. That said, you still get a more immersive sound than other soundbars. TV sounds just as good through the soundbar, and the Clear Voice option helps to make dialogue clearer on shows that aren’t recorded particularly well, such as soap operas. 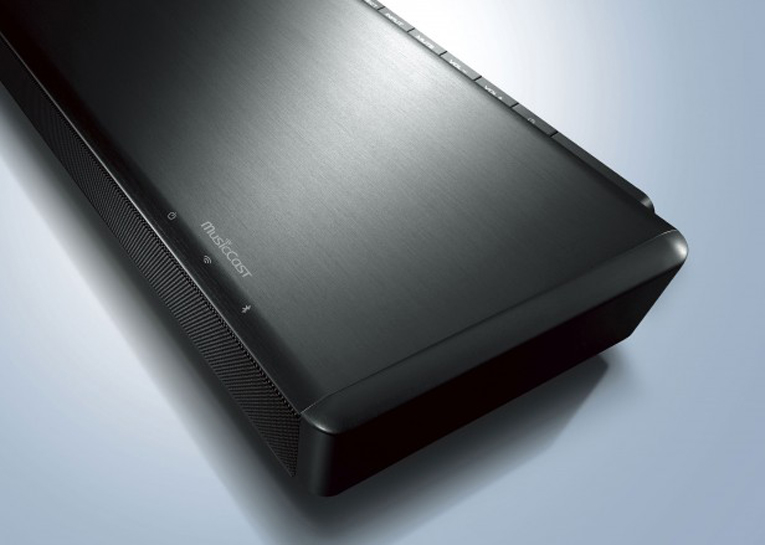 With built-in MusicCast, it’s possible to set up the YSP as part of a multi-room audio system alongside other Yamaha devices. You can play different tracks on each player, or link multiple units together to play the same track. You can play tracks directly from your phone using the MusicCast app, although this doesn’t work if you’re using an iPhone with an iCloud Music Library due to the tracks being protected.

Fortunately, it’s possible to get round this limitation by using AirPlay, playing music directly from the iOS Music app. On top of that, MusicCast also supports media servers, Bluetooth devices and Spotify Connect, so there’s no shortage of music sources.

Audio quality is never going to match that of a proper hi-fi system, but the YSP-2700 is surprisingly accomplished in stereo mode. Excellent stereo separation, bright highlights, a clear mid-range and deep bass all lend themselves to practically any music. The full pumping rock of Rage Against the Machine’s “Bomb Track” was equally as good as the clean subtlety of Debussy’s “Clair de Lune”. 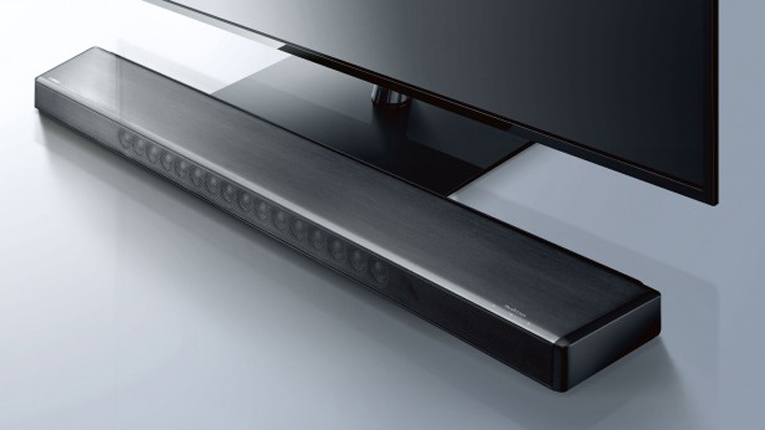 Of course, a proper 5.1 or 7.1 system with discrete speakers will produce better sound, with more directional effects. But then you’ll have to put up with the wires and speakers. If you want high-quality surround-sound that comes close to a discrete system but without this hassle, then the Yamaha YSP-2700 is for you.

Provided you have a room shape that works with the Intellibeam sound technology, the YSP-2700’s refined sound, incredible virtual surround and thumping bass will make films so much more immersive. With the addition of MusicCast, this year’s model is a brilliant starting point for multi-room audio, too.

If your space won’t support the sound beams properly, however, the room-filling Orbitsound A70 airSOUND A70 could be a better choice.

With virtual surround-sound that envelopes you with its killer audio, the Yamaha YSP-2700 is the soundbar of choice for movie lovers.