Vacos Cam review: This promising security camera is handcuffed to a mess of an app

0 0 Connection timed out after 5000 milliseconds0

Battery-powered security cameras are a great option for outdoor use, because they remove the logistical hassle of finding a convenient electrical outlet to power them. But their easier installation comes with a cost, as they tend to be priced higher than their AC-powered counterparts. The $139 Vacos Cam would seem to be the best of both worlds, then—supremely flexible, modestly priced. Unfortunately, testing revealed this camera to be far from a polished product. While its video quality and smart motion detection are solid, its barely baked app makes the camera virtually unusable.

The camera is the latest to crib its look from the Arlo line of home security cameras, in this case the Arlo Go (except that camera connects to the internet via an onboard LTE radio). It’s powered by an integrated lithium-ion battery that promises up to six months of usage per full charge. It has an IP66 weatherproof rating—indicating it’s impervious to dust and resistant to jets of water—and if you opt to mount it outside, you can purchase the Vacos Solar Panel for an additional $19 to keep it continuously charged.

The 1080p camera has a 130-degree field of view and sits adjacent to a PIR (passive infrared) motion sensor. The lens is flanked by two white LED spotlights, and a pair of infrared LEDs that work together to provide up to 33 feet of full-color night vision. Two-way communication and a built-in siren round out the feature set. 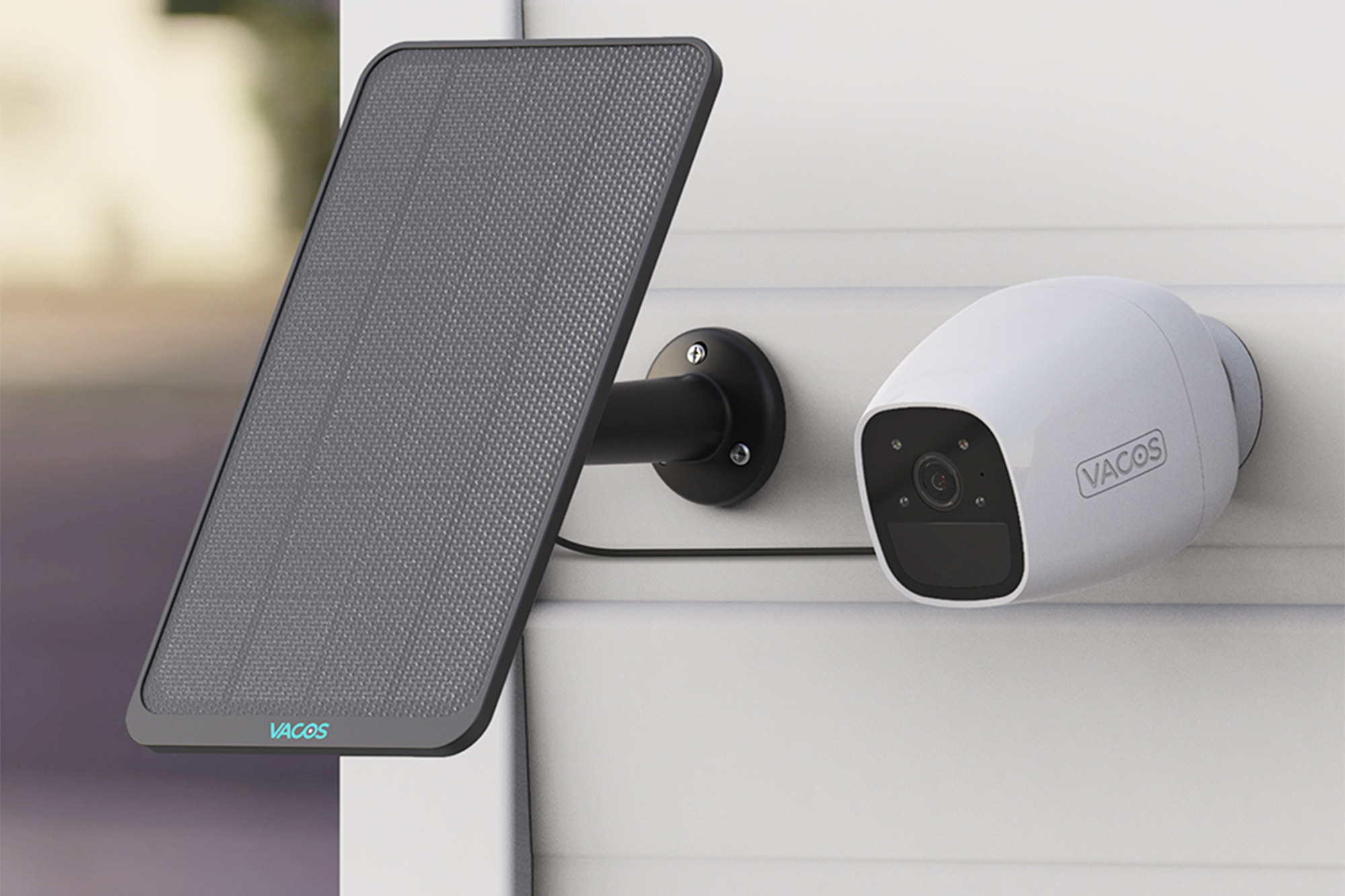 Vacos Cam uses AI to recognize human motion amid all other kinds of movement. It automatically records video of human activity and saves it locally to 16GB of internal flash memory. That can fill up quickly if you use the camera in a high traffic area, though, so Vacos also offers cloud storage for $2.99 a month that gives you seven days of rolling storage.

Setting up the Vacos Cam isn’t difficult, but getting the camera to connect to my Wi-Fi took a half-dozen attempts. The sticking point was a QR code the Vacos app displays for the camera to scan as the final step in the connection process. The camera failed to scan the code several times, requiring me to reset the camera each time and start the whole setup over. The issue seemed to be the lighting in my home; I finally got the camera to recognize the code by scanning it right next to a brightly lit window.

Like the Arlo cameras is resembles, the Vacos Cam can be attached magnetically to a ball-shaped mount or screwed onto a mounting arm. Both options allow you to swivel the camera to change the viewing angle.

The Vacos companion app makes operating the camera intuitive. Vacos Cam is displayed on the app’s device page as a thumbnail screenshot of the camera’s last live view. Tapping it opens the live stream and various controls. Some of these are for operating the camera, including audio mute and push-to-talk buttons, and buttons for manually recording video and taking screenshots. Others provide access to event-triggered clips and a timeline for scrubbing through all video saved to the camera or the cloud.

As straightforward as that all sounds, the app performed erratically in my testing. The live feed routinely took more than 15 to 20 seconds to load, sometimes stalling altogether and requiring me to reboot the app and try again. Video clips were also slow to load, and playback was frequently choppy. Several times during playback I’d get several seconds of black screen, followed a glimpse of the video, followed by more blacked out footage. Other times, the clip would start, then the app would crash and close. Even without these problems, the video clips weren’t very useful as they only last about seven seconds—hardly time to capture enough activity to size up a potential crime scene. Worse, Vacos didn’t include a download option, so there’s no way to save your videos as a file that you can hand over to police as evidence.

Video playback through the timeline was even more problematic. Here, you choose a storage location, either the camera or the cloud, and a date. Then you scroll through the timeline to find the clips you want, which are marked as red or blue lines; there’s no explanation given for the different colors but red seemed to correspond to general motion while blue indicated human detection. Despite signing up for the 90-day trial, my cloud subscription never worked (though that didn’t stop the app from trying to get me to “extend” my trial by paying the monthly fee), so when I tried to access video there, I got a black screen with the error message “No Video Data,” even though I could see video events marked on the timeline.

I was able to access timeline clips stored locally, but these would play at twice-normal speed then abruptly slow to half-speed or stutter to a stop and time out. When the latter happened, I’d have to restart the app to get back to the camera screen.

Other oddities further hampered my experience. The camera’s AI not only filters out non-human activity, it disregards it altogether. That’s a plus if you don’t want your dog setting off a barrage of alerts when he’s chasing your cat, or the leaves outside triggering the camera siren in a high wind. But there are times when you want to be alerted to general motion. I set the camera up to monitor anyone coming into our long driveway, particularly at night. But the camera could only notify me when someone entered on foot, not if they came in by car. A more flexible detection/notification system—which, it should be noted, most advanced security cameras offer—would have made the Vacos Cam a lot more useful.

For its part, human detection worked remarkably well. These notifications were timely and accurate, though the wording “Human Induction” is a head-scratcher.

It’s a shame the Vacos app is such a hot mess, because the camera’s video quality is quite good. Daytime images are tack-sharp with balanced lighting and vibrant color. Color night vision was just as good, but just a touch grainier.

But that’s true of many of the cameras in our buying guide, including the aforementioned Arlos. In fact, the Arlo Pro 3 is what I’d recommend as an alternative, at least until Vacos resolves its camera’s many issues. You can purchase a single Arlo Pro 3 for not much more than the Vacos Cam (multi-camera starter kits are also available) and get similar specs with a far more polished app.

Don't miss a deal at FNAC
Best offers at Vimeo
Discounts, Sales and Deals at EE Mobile
Save your money with Virgin Media
Online-Shopping with H&R Block
Best products at Groupon
Latest Posts