The 12-outlet Tripp Lite AVR900U is the wrong intersection of perfectly fine separate features in an otherwise well-made model. Its reasonable battery size could support a tricked-out computer system with multiple displays and peripherals for a few to several minutes during a power outage. The line-interactive approach incorporated in its design provides fast power switch over (as quick as a few milliseconds) along with constant power conditioning to correct for minor fluctuations without wearing out the internal battery.

On the other hand, the AVR900U relies on simulated power switching instead of a “pure” sine wave. That means it’s not the right choice for computers with active power factor correction (PFC). A simulated, or stepped, sine wave fed into an active PFC power supply can cause a high-pitched whine and prematurely wear its components or even cause it to fail.

Active PFC power supplies are more efficient than previous designs, and also allow voltage adaptative for worldwide sales. But they’re finicky about the smoothness of the alternating current fed into them, and it’s not worth the price of repairing your computer rather than buying a better-suited UPS with a pure sinewave output that’s as smooth as utility power.

For about $40 more, you can purchase instead the CyberPower CP850PFCLCD, a line-interactive UPS that also has a pure sinewave output and similar power capacity. (We reviewed the slightly higher-capacity CyberPower CP1000PFCLCD, which is in same series of UPS models.) 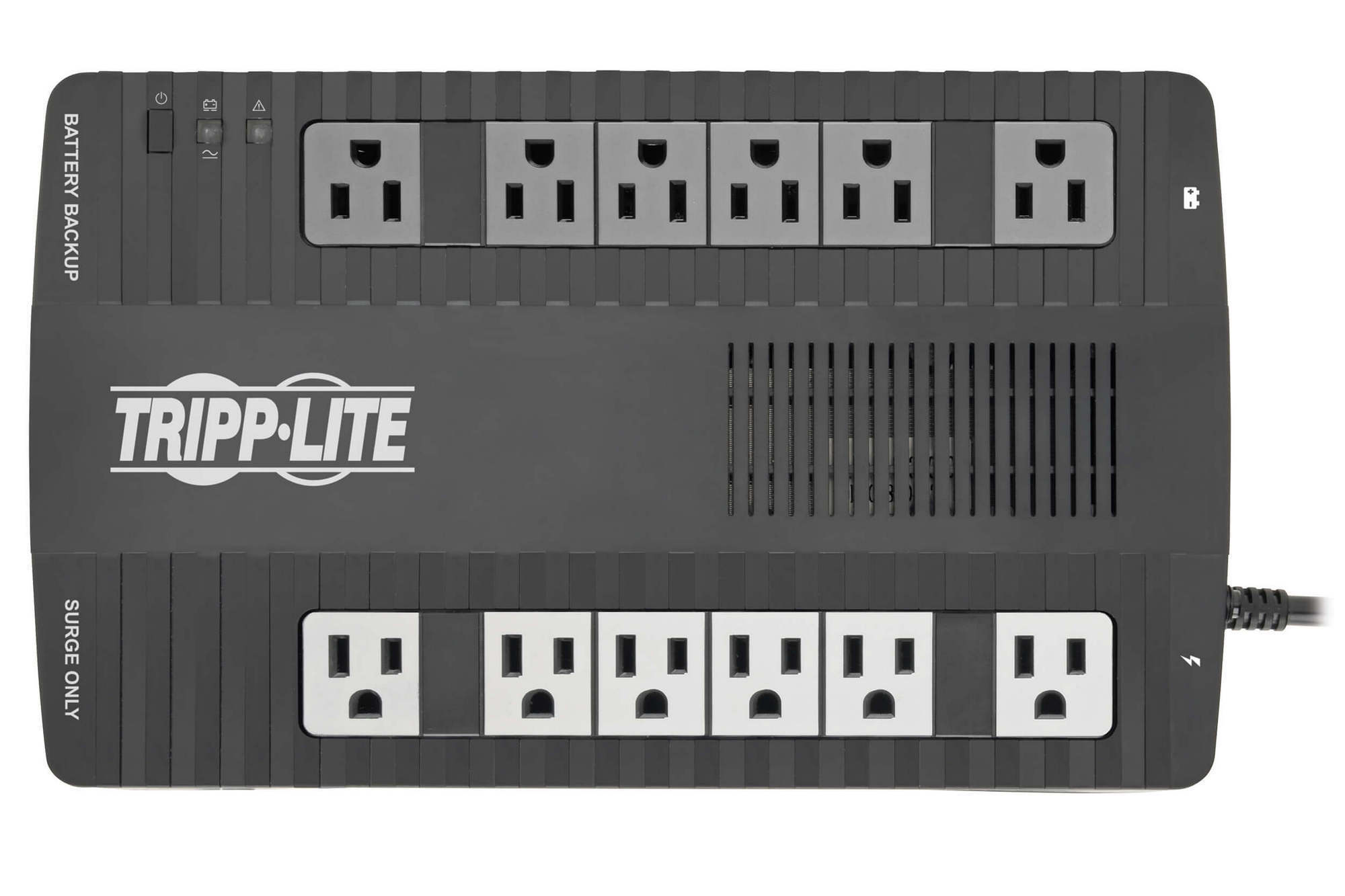 The AVR900U might be right to power home-networking gear in the event of power outages, as its battery could support about a combined 20W of equipment power draw for up to two hours and 100W for up to 30 minutes. (Check your broadband modem, Wi-Fi gateway, and other solid-state communications gear power specs to figure total power required.) Its generous 12 outlets are split into one set of six backed by surge protection only and another six that are additionally shored up by line conditioning and the battery. Two outlets on either side are 1.75 inches apart from four grouped tightly in the center, the better to add DC-adapter “wall warts.”

But for the AVR900U’s price, the line-interactive power conditioning that comes at a premium isn’t worth it. Instead, consider a UPS with a standby design, which is perfectly fine for networking gear that doesn’t have spinning drives or picky power supplies. A standby UPS might tap its battery more frequently if local power is routinely erratic, dipping below or above standard voltage. If you have those issues in your area and want to use a UPS to solve them while backing up network hardware, the price premium is worthwhile.

I don’t recommend the AVR900U in any use case, not because of any flaw in the product itself, but because it doesn’t scratch the right itch. Other products from Tripp Lite and other UPS makers have a better mix of features that intersect usefully. For instance, we like the Tripp Lite SmartPro SMC1000T, a 600W unit ideal for computer-system power conditioning and support.

The AVR900U has a variety of other minor flaws. It lacks a fairly standard multi-purpose electrical fault detector for grounds, shorts, and other issues that indicate an electrical wiring problem that should have you on the phone to an electrician immediately. It’s a good feature for installing a new UPS or noticing if there’s a problem over time.

It lacks programmable features via buttons. You must use downloadable software when connected to a computer by USB with an included cable. The software is mentioned in the manual, and you have to hunt the site to find it—only to discover the control software only works under Windows and requires Java. You can, however, use automatic restart, scheduled, and other built-in UPS features found in Windows and macOS without installing the software. 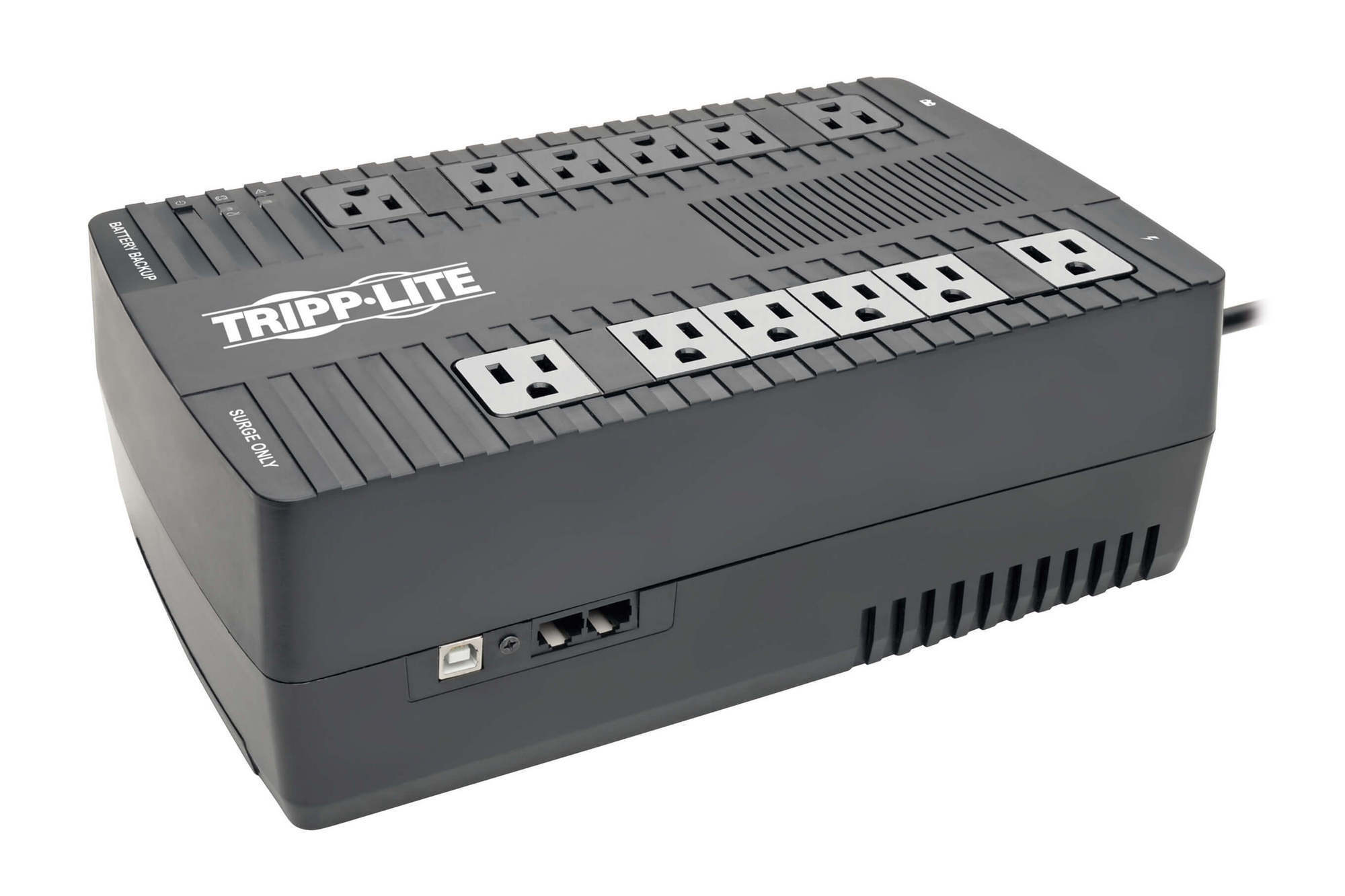 Tripp Lite doesn’t include warranty information in the box, but the packaging says a $100,000 and 3-year warranty is included. The manual has a link to product registration and generic warranty details; you apparently don’t get the specifics of the warranty for your unit until you register.

Only the original purchaser is covered, and claims must be filed with 30 days of an incident. Tripp Lite’s insurance notes that it could offer to repair up to $100,000 of damaged equipment, but it might replace it on a “pro rata” basis, which I interpret to mean its depreciated current value, instead of its actual replacement cost.

Tripp Lite turned the dials on its product matrix incorrectly to come up with the AVR900U, but don’t let that discourage you from examining the company’s other products. The care of manufacture and quality of design aren’t at issue, only its suitability to purpose and cost per watt for potential appropriate uses.

While Tripp Lite’s AVR900U is a well-made unit with good battery life, a lack of pure sign wave output makes it inadequate for modern computers.

Don't miss a deal at Udemy
Best offers at Ticketmaster UK
Discounts, Sales and Deals at House of Fraser
Save your money with TalkTalk Phone and Broadband
Online-Shopping with FNAC
Best products at Intuit Small Business
Latest Posts