Swiftpoint Z review: Would you spend $230 on a mouse?

Would you spend $200 on a mouse? Should you spend $200 on a mouse? Always a fan of gloriously pricey peripherals, I recently took the Swiftpoint Z for a spin to find out. At $230 list, I’m pretty sure it’s the most expensive mouse I’ve ever used—and it certainly tries to justify that price with a laundry list of experimental features. (Note: As of this writing, Amazon is selling the Swiftpoint Z for $150.)

Let’s get into it though. If nothing else, the Swiftpoint Z is at least the most interesting mouse I’ve ever laid hands on. Get ready to rethink every assumption you’ve ever had about how a mouse should function.

And you thought Mad Catz’s RAT looked weird, right? The Swiftpoint Z is one hell of a conversation starter. All you have to do is leave it out on a table, and I guarantee the first person to lay eyes on it will make a comment. It’s uh…wild. 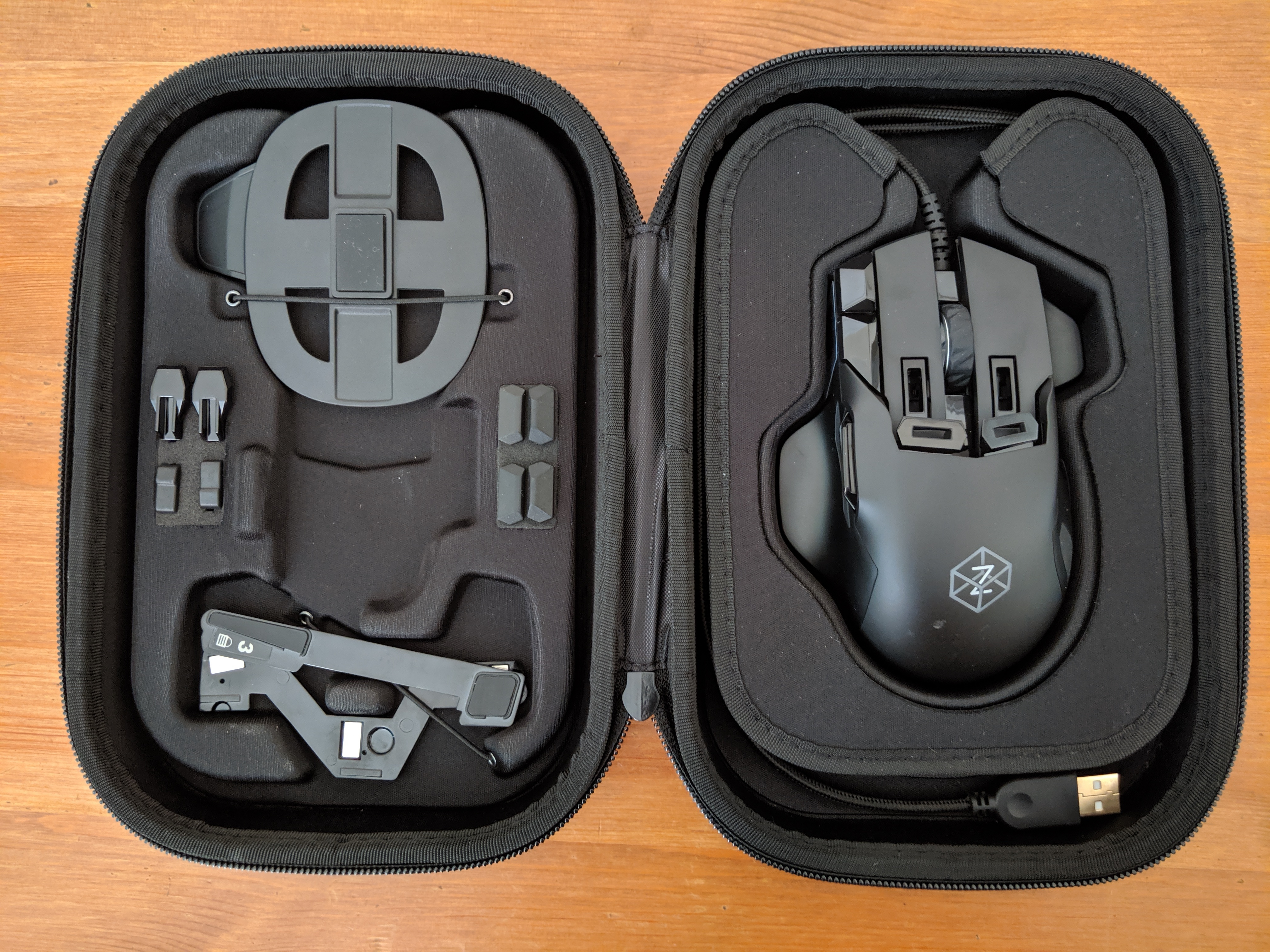 Honestly it looks broken when you first get it. The Swiftpoint Z arrives in an oversized hard case with a whole mess of swappable parts to sort through, some of which need to be installed before you start. My initial impression was a mouse deconstructed, like one of those blown-up diagrams from The Way Things Work.

This impression is redoubled by the multi-zone mouse buttons. No, you’re not looking at them wrong. The Swiftpoint Z has the usual Left and Right Mouse buttons, and then towards the rear it has two more pairs of Left and Right Mouse buttons. Those swappable parts I mentioned? You use some of these to build up the rear buttons, giving them enough height that the bulk of your fingers rest on the main mouse buttons and then the first knuckles sit on the rear ones—which rock forward and back, for two inputs each. Then the middle two are meant to be pressed by drawing your fingers in and using your fingertips.

This eight-button crush is bizarre, and takes more than a little getting used to—but it’s probably the Swiftpoint Z’s most praiseworthy innovation. Buttons on buttons. I’ve never seen it before, but it works surprisingly well once you’ve trained your fingers. 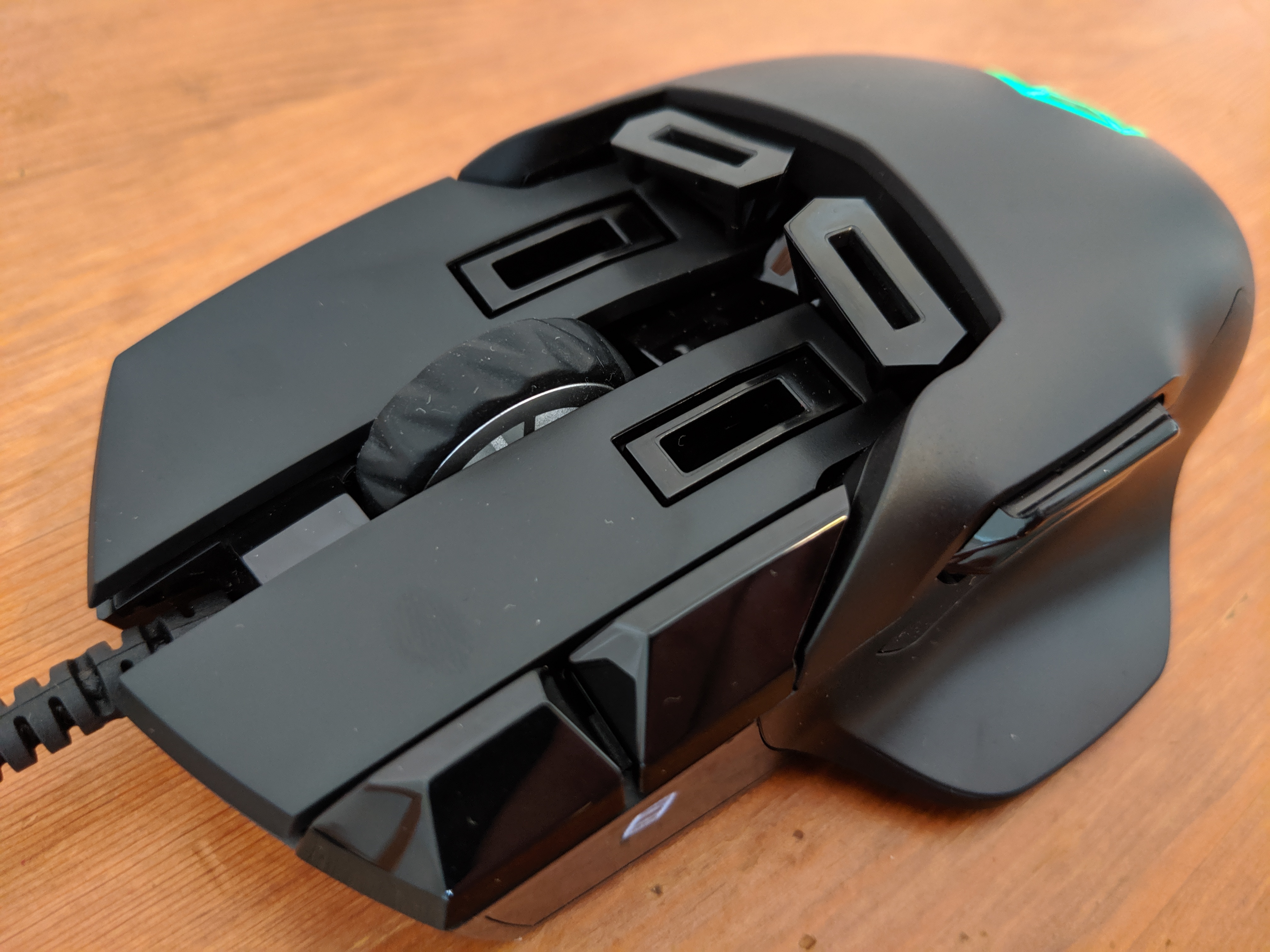 In addition to those eight, you’ve also got two more buttons along the left edge of the Left Mouse button, two for the thumb, plus the scroll wheel, for a total of thirteen buttons. That’s similar to the Logitech G502, though I think the G502 is probably a bit more approachable for the average user.

Thirteen is just the start though. In another semi-successful gimmick, five of the Swiftpoint Z’s buttons are pressure-sensitive: the main Left and Right Mouse, the two fingertip buttons, and the scroll wheel click.

This tech, which Swiftpoint calls “Deep Click,” is fun to mess around with—though it takes a long time to parse the software front-end. I recommend watching some videos. Once I got up and running though I spent a long time trying to come up with both useful and frivolous applications for the pressure-sensitive buttons. Useful: Increase the pressure on the Right Mouse to lower your DPI and increase your aim accuracy. Frivolous: Map volume control to Left and Right Mouse. Chaotic: Make pressing down too hard Alt-F4 out of whatever window you have open. 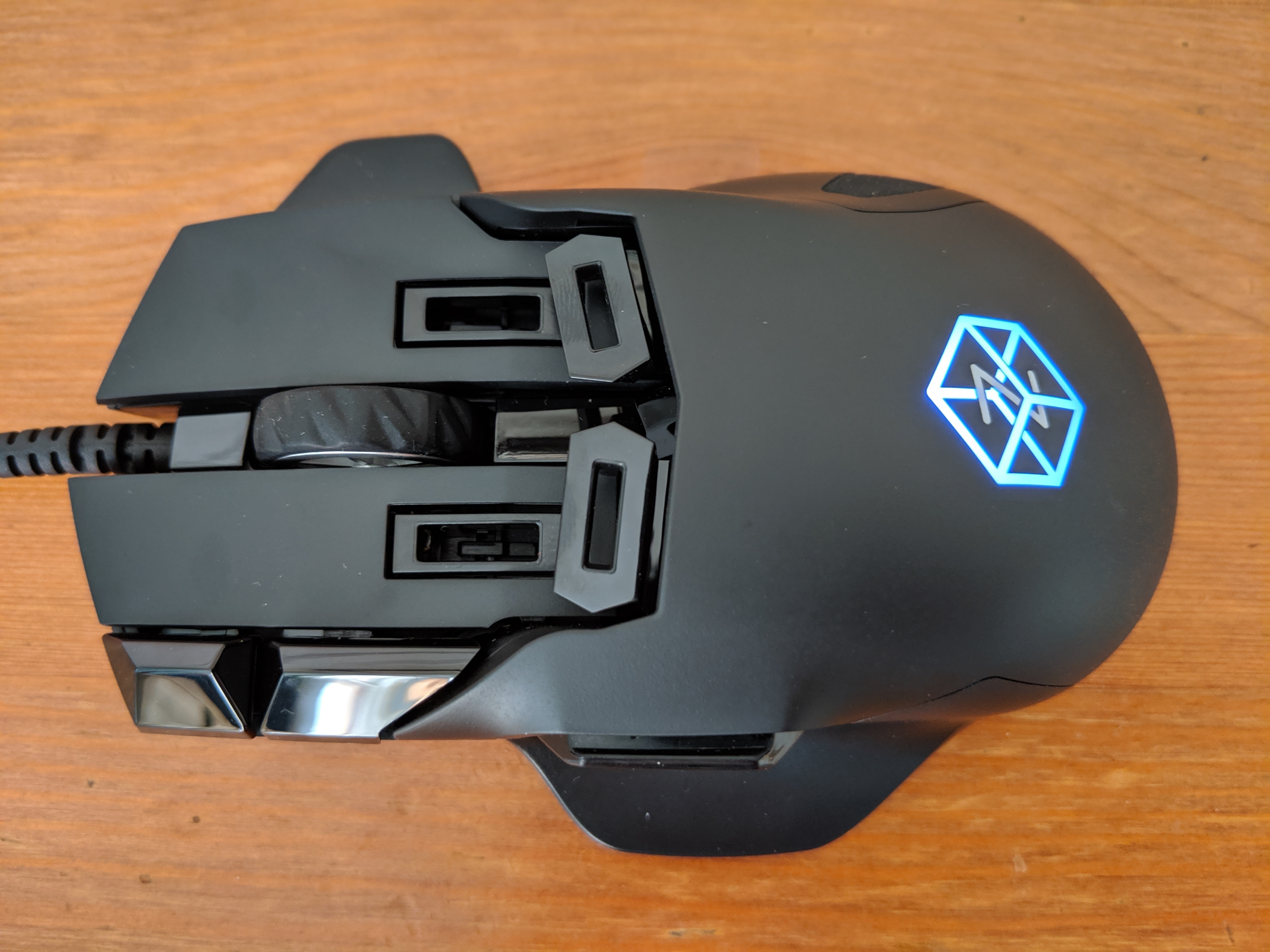 It’s only as useful as you are creative, though there are some great community-built profiles for popular games like Apex Legends and PUBG. I got plenty of use from even my thrown-together setups though, and could see Deep Click making its way to other mice. It’s like Roccat’s Easy-Shift tech, which lets you use a mouse button as a modifier key to double your commands—except there’s no modifier key. Pretty neat.

Okay, so far the Swiftpoint Z is two for two on gimmicks. Pretty good, right? Maybe not enough to convince you to shell out $200 for a mouse, but there are aspects of the Swiftpoint Z that impress, and which I’d love to see carry over to a second iteration.

Unfortunately the Swiftpoint Z has an everything-and-the-kitchen-sink problem. It’s like the engineers kept adding more and more and more features, driving the cost higher and higher, but at some point there’s diminishing returns.

Case in point: The Swiftpoint Z packs a gyroscope. Ostensibly you can use the gyroscope as an additional set of inputs. Swiftpoint even boasts that it’s made joysticks “obsolete,” and sure, in a pinch you could probably use the Swiftpoint as a joystick replacement. It’s not a great experience though, and not a reason to buy the Swiftpoint Z. 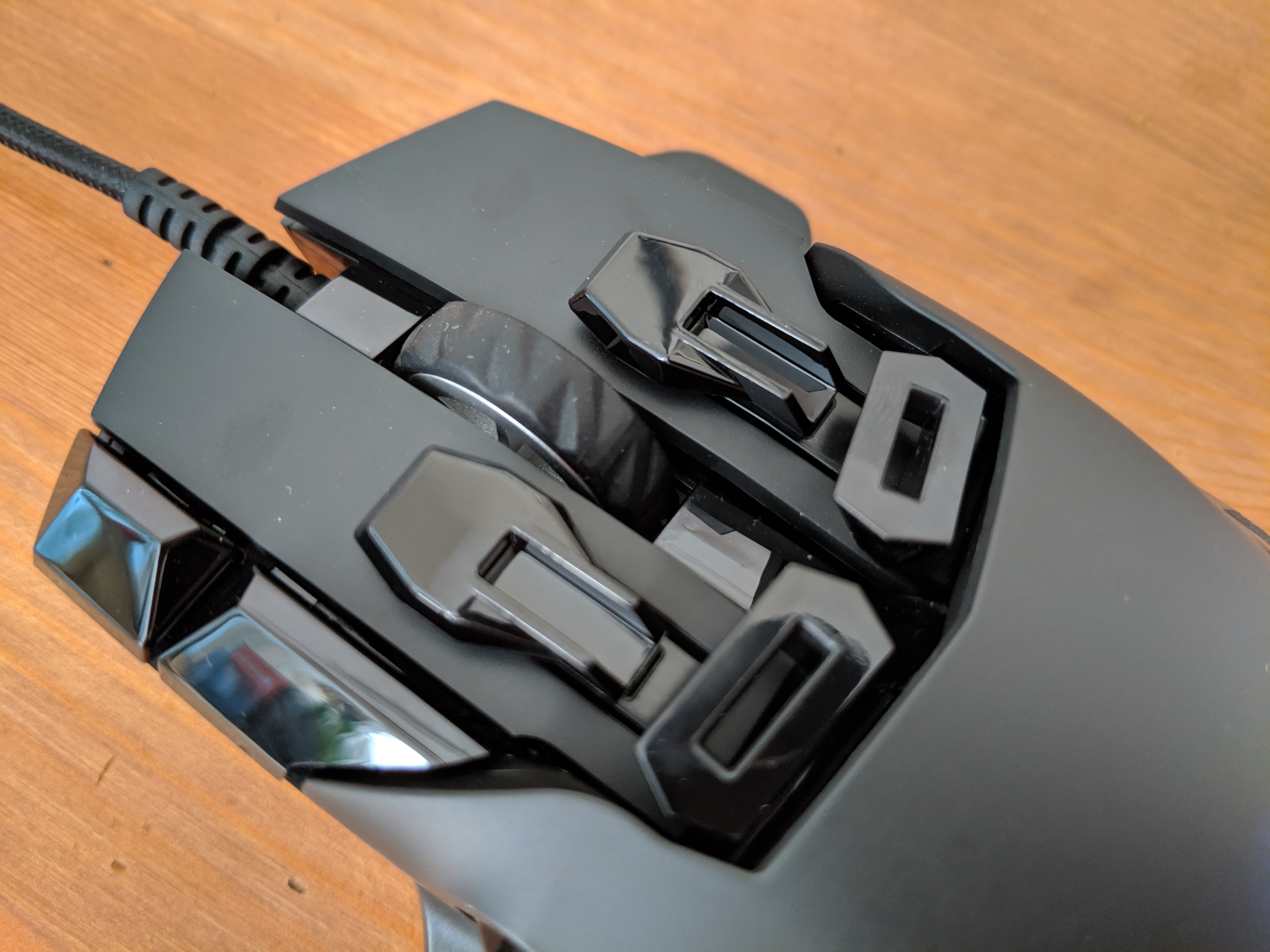 And if you only plan to use the gyroscope for more discrete inputs? Well, that has its issues as well. Namely, if you’re a low-DPI user and tend to pick up and readjust your mouse, you’ll find yourself accidentally triggering your silly tilt inputs in the process unless you make the angles so extreme they’re uncomfortable. Even if not, the whole concept requires using the Swiftpoint Z as not-a-mouse to function, lifting it off your desk and rendering the actual sensor useless until you’re done.

It’s a fun novelty, but niche. I did become a fan of the “tilt the mouse and use the scroll wheel to adjust DPI” default. Nifty. But it’s hard to imagine it becoming an essential part of anyone’s arsenal.

That DPI adjustment I just mentioned also relies on the Swiftpoint Z’s OLED screen, and again, it’s a gimmick you’ll rarely use outside this one very specific case. Like the one on Cooler Master’s MM830, it’s a neat feature to show friends and one that never, ever enters your mind while using the mouse. 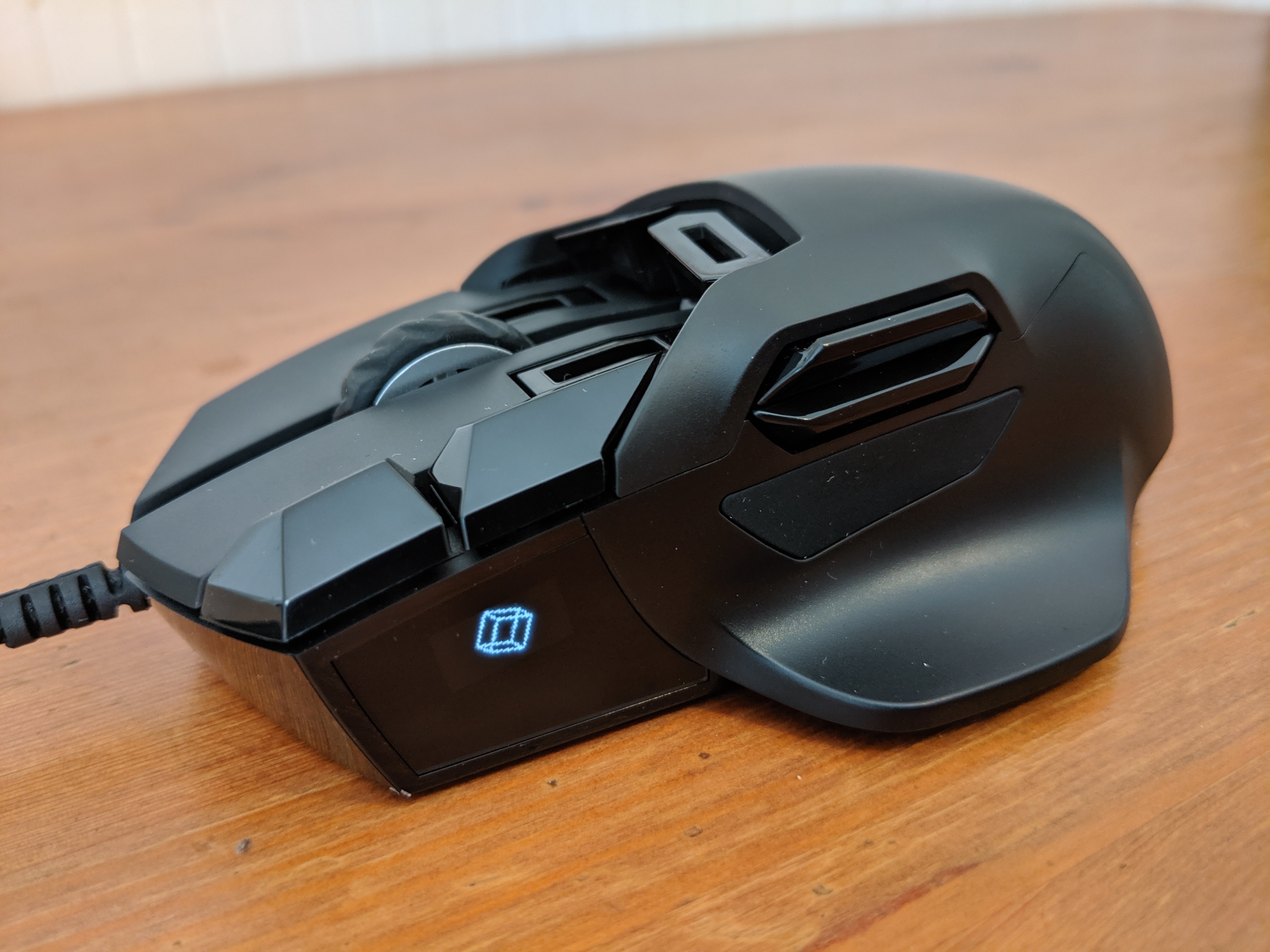 It tries to do too much, really—and for no reason. Swiftpoint nailed the fundamentals. The Swiftpoint Z is very comfortable, reminiscent of the G502’s scoop shape and thumb rest. And it’s backed by a Pixart PMW3360 sensor, still a top-tier piece of hardware, so there’s a perfectly good gaming mouse underneath all the gimmicks.

There are so many gimmicks though, and the gimmicks are so expensive.

Listen, the Swiftpoint Z is fun. I like when manufacturers break out of the DeathAdder clone territory and do something truly new and novel. I poke fun at some of these “breakthrough” ideas, but they’re also an important part of this process because every once in a while, a gimmick shines so bright it becomes indispensable.

I think a second-generation Swiftpoint Z, or at least a basic fewer-frills Swiftpoint Z, could have a lot to offer. Keep the unique button layout. Keep the pressure-sensitive buttons. Cut the rest, and hopefully cut $100 off the price tag in the process, and it could be an interesting (albeit still niche) mouse for tinkerers and other performance-oriented people.

But it needs to get there, first. Right now, the Swiftpoint Z is cool, but you pay a premium for a bunch of features you’ll probably never use—or only use under very specific circumstances. Hard to justify, with great mice so easy to come by nowadays.

The Swiftpoint Z is certainly one of the most interesting mice we’ve seen, but a $200-plus list price is hard to stomach no matter how many gimmicks are crammed in.