The Sony A7S III has been in the pipeline so long we’ve since had five X-Men films, but Sony has now confirmed that a successor to the Sony Alpha A7S II is definitely coming soon.

And very soon too – Sony has announced a launch event for the A7S III, which will be taking place on July 28 at 10am EDT / 3pm BST (or midnight AEST on July 29). The announcement confirms the new full-frame camera’s name and when we’ll see it make its public debut, but what exactly can we expect from the video-focused mirrorless shooter?

There are certainly plenty of rumors to go on, including talk of a brand new stacked sensor and exciting viewfinder. And while we won’t know its specs for sure until that July 28 event, they do give us a taste of what to expect from a camera that has a new rival in the shape of the Canon EOS R5.

What exactly is the A7S series? The original Sony A7S arrived in 2014 with an unusually low-resolution 12MP sensor, which brought comparatively huge pixels and a wide ISO sensitivity that stretched all the way from ISO 100-102,400 (expandable to 409,600).

It was quickly followed up by the Sony A7S II in 2015, but camera technology has evolved in leaps and bounds in the time since we branded that the camera the “best-video-shooting stills camera” you could buy. The Panasonic GH5 and GH5S have since become the weapons of choice for those looking to shoot pro-quality video with a small mirrorless camera. And with the arrival of the formidable Canon EOS R5, plus rumors about a possible Panasonic GH6, there are certainly plenty of big video rivals for the A7S III.

Still, the reason why the A7S III is so anticipated is because of its predecessors delivered a special combination of a 12MP full-frame sensor and 4K video in a small package. If the A7S III can add modern specs like 10-bit video, it should be very popular indeed. Here’s everything we know about the A7S III so far.

Sony has now confirmed an official launch event for the A7S III on Sony Alpha Universe.

The event will take place on July 28 at 10am EDT / 3pm BST (or midnight AEST on July 29). This followed speculation from Sony Alpha Rumors that the Sony A7S III would be announced on July 28 or July 29, with availability from mid-August.

As expected, the news also fits an announcement made by Kenji Tanaka, VP and Senior General Manager of Sony Imaging Business, during a recent interview with DPReview. In the interview he said: “I can confirm that a successor to the Alpha 7S II will be coming, later this summer. Right now, we’re focused on the launch of the new camera, and it will be a complete redesign of the whole system, including the image sensor. Everything is new.” 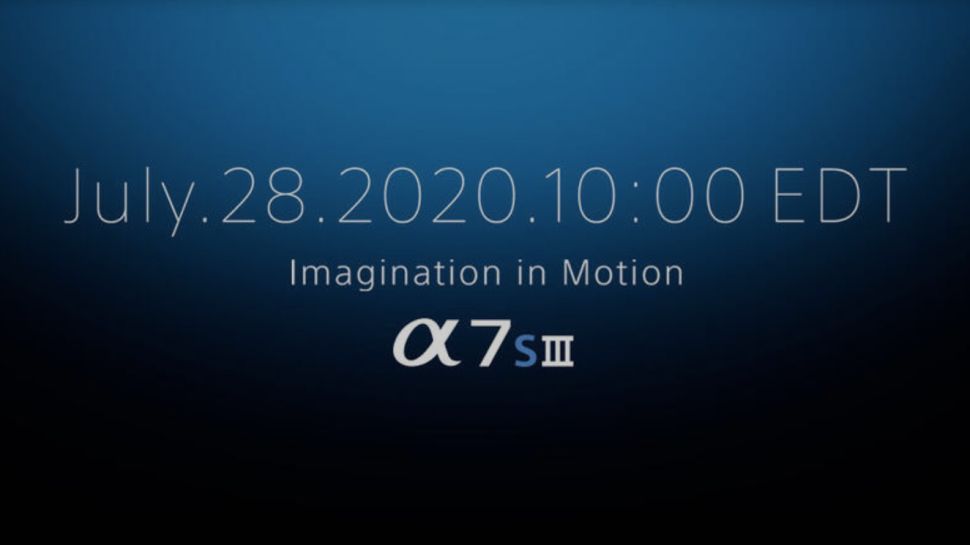 We had originally hoped to see the A7S III last year, following comments from a Sony executive in August 2019 that Sony was still developing the S line. But it looks like the camera is finally ready to arrive, just weeks after the 8K-capable Canon EOS R5.

There haven’t yet been any leaks around possible pricing for the A7S III, but we can speculate based on the Alpha A7S II. Right now, you can pick up that camera for $1,999 / £1,999 / AU$2,600, which is pretty good value considering is started well above that.

We reckon the A7S III is likely to start at around $3,000/£2,500/AU$4,500 at launch, which would be the same as its predecessor’s launch price, or possibly slightly more given its rumored specs.

Until recently, the Sony A7S III was expected to have a 15.36MP back-illuminated sensor with Quad Bayer design, but the latest rumors suggest it will instead be a 12MP affair.

While a slight resolution boost would have been welcome, the A7S III’s priority is video quality and according to Sony Alpha Rumors the brand new sensor is expected to bring other features like faster readout speeds.

Also, a higher resolution isn’t necessary for a primarily video-orientated camera, with the pay-off being larger pixels for greater light-gathering capabilities.

These rumors appear to put an end to suggestions that Sony might try and push the resolution up to 6K or 8K. After all, these would require sensor resolutions of 24MP and 33.1MP respectively.

On paper, this appears to put it a step behind the 8K-capable Canon EOS R5 and the 6K-capable Panasonic Lumix S1H, but it’s possible Sony simply didn’t think it was necessary in 2020 and has instead looked to refine the A7S III’s 4K powers.

Early rumors had the A7S III capable of shooting 4K video at up to 120fps, and that’s been backed up by more recent speculation. If true, then it’s twice the frame-rate we were initially expecting and twice the rate the Panasonic’s S1H is currently capable of.

We’re also expecting to see the A7S III record 4:2:2 10-bit internally as well. This was backed up by a remark in a DPReview interview from Kenji Tanaka, VP and Senior General Manager of Sony Imaging Business, where he revealed that the most requested features from A7S II owners had been 4K/60p and 10-bit 4:2:2.

Perhaps the most significant recent rumor, again picked up by Sony Alpha Rumors, is that the Sony A7S III apparently won’t have any time recording limits in any video modes. If that’s true, it would give Sony’s camera a possible edge over the Canon EOS R5, which is limited to 30 minutes when recording 4K. That said, the latter can manage 8K/30p Raw shooting for up to 20 minutes, before overheating becomes an issue.

Interestingly, according to an earlier Sony Alpha Rumorsstory, Sony has been finalizing a new H.265-based professional codec. Known as XEVC, and a successor of XAVC, the new codec is rumored to include 12-bit 4K and 12-bit 8K 4:4:4 capabilities, while 1080p Full HD can be captured at 240fps and 10-bit.

Recent rumors have suggested that the upcoming video camera will have a similar design to the Sony A7R IV, only with a new, fully articulating screen like the one seen on the Sony ZV-1.

This would mean the A7S III’s body is likely to be a little thicker than its predecessor, perhaps to fit in a cooling vent, which Sony Alpha Rumors has suggested will be included in a similar vein to the Panasonic S1H.

If this is true, there’ll likely be a fan close to the sensor which draws cool air from vents on one side of the body and pushes the warm air out the other side. This would be significant, because Canon recently issued a statement that defended the recording limits of both the Canon EOS R5 and EOS R6, which are in part a result of its decision not to include a cooling fan.

Another bit of good news is the possible arrival of a dedicated AF-On button on the rear of the Alpha A7S III, making back-button focusing much easier. 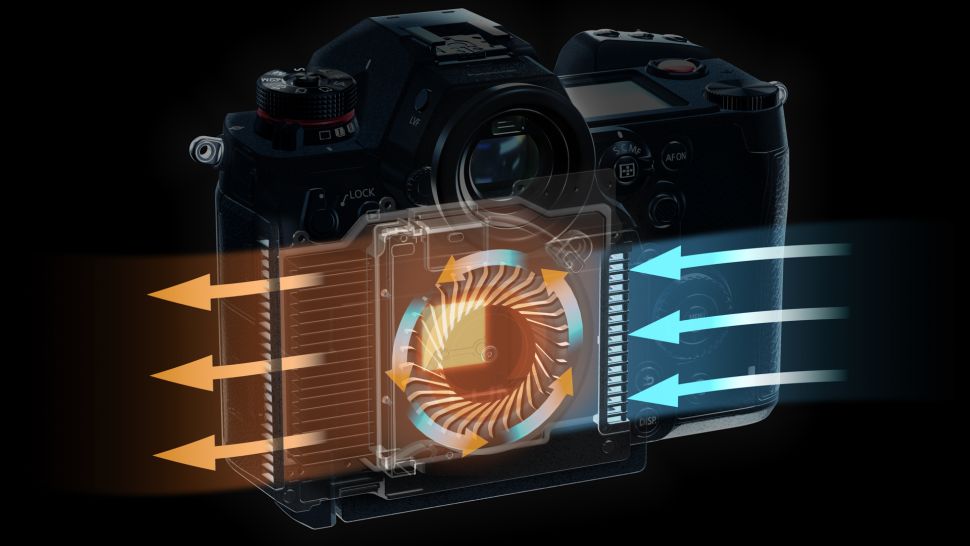 Another rumor making the rounds is about the A7S III’s memory card slots. There will reportedly be two but the interesting bit is that they’re rumored to support both standard UHS-II SD cards as well as… wait for it, a CFexpress Type A format that is now even available to buy yet.

Each slot is rumored to be able to support both formats (thanks to their similar sizes) although you won’t be able to record to both simultaneously if you’re using one of each card. This may be a bold and good move from Sony if the rumor turns out to be true as Type A CFexpress cards might be more affordable than the current Type B CFexpress cards available on the market as they have slower transfer speeds. However, when CFexpress Type A cards will become available is still a question mark.

An exciting and unexpected new rumor about the Sony A7S III is that it will be significantly ramping up the resolution of its electronic viewfinder (EVF). According to Sony Alpha Rumors, it could have a 9.44-million dot EVF, which would make it the world’s highest-resolution ‘finder.

That would be a huge jump from the 3.8 million-dot EVF of the Sony A7R IV. As we’ve seen with other recently announced Sony cameras, the rear 3.0-inch tilt-angle display is likely to offer touchscreen control, which should make both shooting and reviewing images and footage that much easier.

Videographers will be particularly excited about the prospect of seeing the A7S III’s low light performance married to modern skills like Sony’s latest autofocus, new codecs and possibly the world’s highest-resolution EVF.

All we need now is for Sony to confirm its much-anticipated specs – we’ll hear about those at its confirmed event on July 28, which we’ll be reporting from.

Don't miss a deal at FNAC
Best offers at Udemy
Discounts, Sales and Deals at Currys
Save your money with Newegg
Online-Shopping with Marks and Spencer
Best products at Bodybuilding
Latest Posts