Soliom G1 380° review: A clever, but incomplete take on a dual-channel dash cam

I didn’t quite know what to make of Soliom’s G1 380° ($100 on Amazon) the first time I saw the horizontally split-frame front/rear, surround video that it captures by default. It’s unique among dash cams in my experience, and while the quality is weak, this camera is arguably the best I’ve seen for pure legal daytime protection to the front and sides. For everything else, not so much.

This review is part of our ongoing roundup of the best dash cams. Go there for information on competing products and how we tested them.

The Soliom uses two extremely wide field-of-view, 190-degree cameras. By default the view captured by the front camera occupies the top half of the video, and the view captured by the interior/rear captures the bottom. This obviously saves space and makes it easier to view an entire scene, but as I also mentioned, the quality isn’t up to snuff except at very short distance. More on that in the performance section.

The G1 380° will capture video normally—that is, a single view; but according to Soliom you must press the right part of the ring on the circular control button to switch to full-frame front mode. I however, was never able to get the camera to stay out of split-frame mode. You can’t have discrete exterior and interior video captured at the same time unless you’re in parking mode. Note that the camera doesn’t remember your last setting; it defaults to split-frame every time you power up, and parking mode is also set in stone as discrete exterior and interior.

Split-frame makes sense for maximum coverage of events, but if you would prefer separate front and interior/rear captures during normal usage, buy another camera.

The G1 380° has the appearance of a half-cylinder about five inches wide, a little over an inch thick in the body, and a little over two inches thick at the cameras. The two 1080p cameras are on the left side of the unit, with the 2-inch color display and the center button/rocker ring controls to the right. I wasn’t particularly enamored of the control ring, as it is nearly impossible to read the raised lettering. Read the user’s guide thoroughly first. 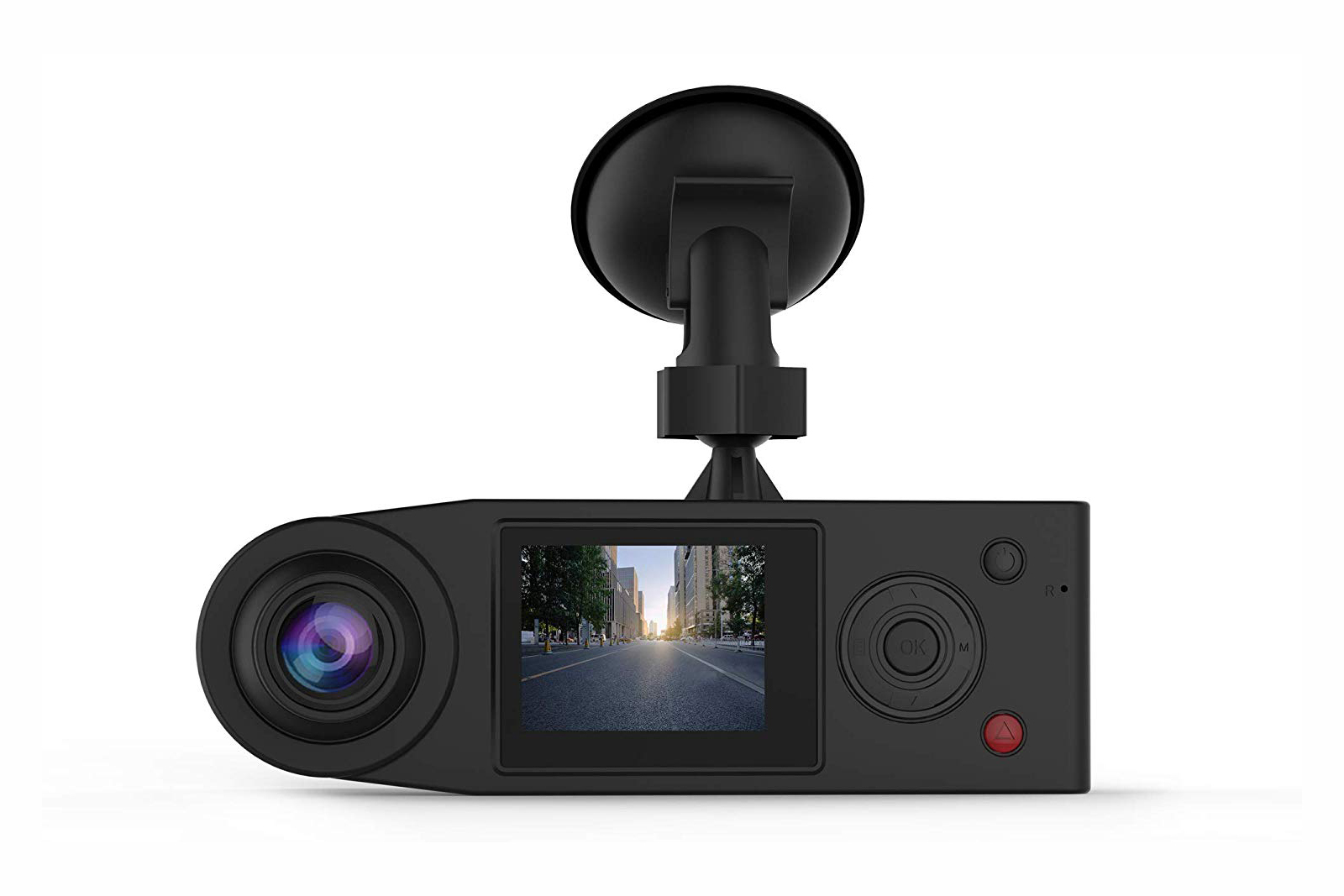 The G1 380° has three ports on the left: micro-USB for power and data access when the camera is attached to a PC, a port for an external GPS unit, and an SD card slot. Unfortunately, the GPS port is a dummy—the camera doesn’t support any available external GPS models. The company said this is planned for the next iteration of the product.

The on-screen interface is a single menu with a list of choices. It’s easy enough to use, and you’ll only need it once in a while. Note that there’s a GPS option, but as I’ve already pointed out, it’s for the future.

There’s a parking mode with motion detection. The G1 380° has a 300mAh battery on board, and you can set it to run for up to five minutes after 12-volt is removed. But it actually lasted well over a day in standby mode, so for shorter periods of time you could probably skip the hard-wiring. I suggest an OBD-II cable for easy always-available 12-volt.

Soliom claims the camera will operate from minus 4 to 158 degrees Fahrenheit, and it ran nearly cool in my tests. But the unit is flat-black, and I wasn’t in bright sunshine for my testing, so expect it to trap some heat under sunnier conditions.

When it comes to capturing the action in front of you and to the sides you during the day, the G1 380° works quite well, covering areas in the periphery that most dual-camera systems won’t. But interior night captures are extremely dark due to the lack of infrared lighting, and exterior day and night captures rapidly decline in quality with distance. As little as 20 to 30 feet away, details such as license plates become less distinct.

Most likely, the drop in quality is because the cameras are focused for close proximity, which for legal purposes is quite likely the best choice. That makes the G1 380°’s captures more than workable, if hardly beautiful. Note that as this is not the dash cam system you want for full-frame video, I’ve stuck with images of the unit’s default split-frame video. 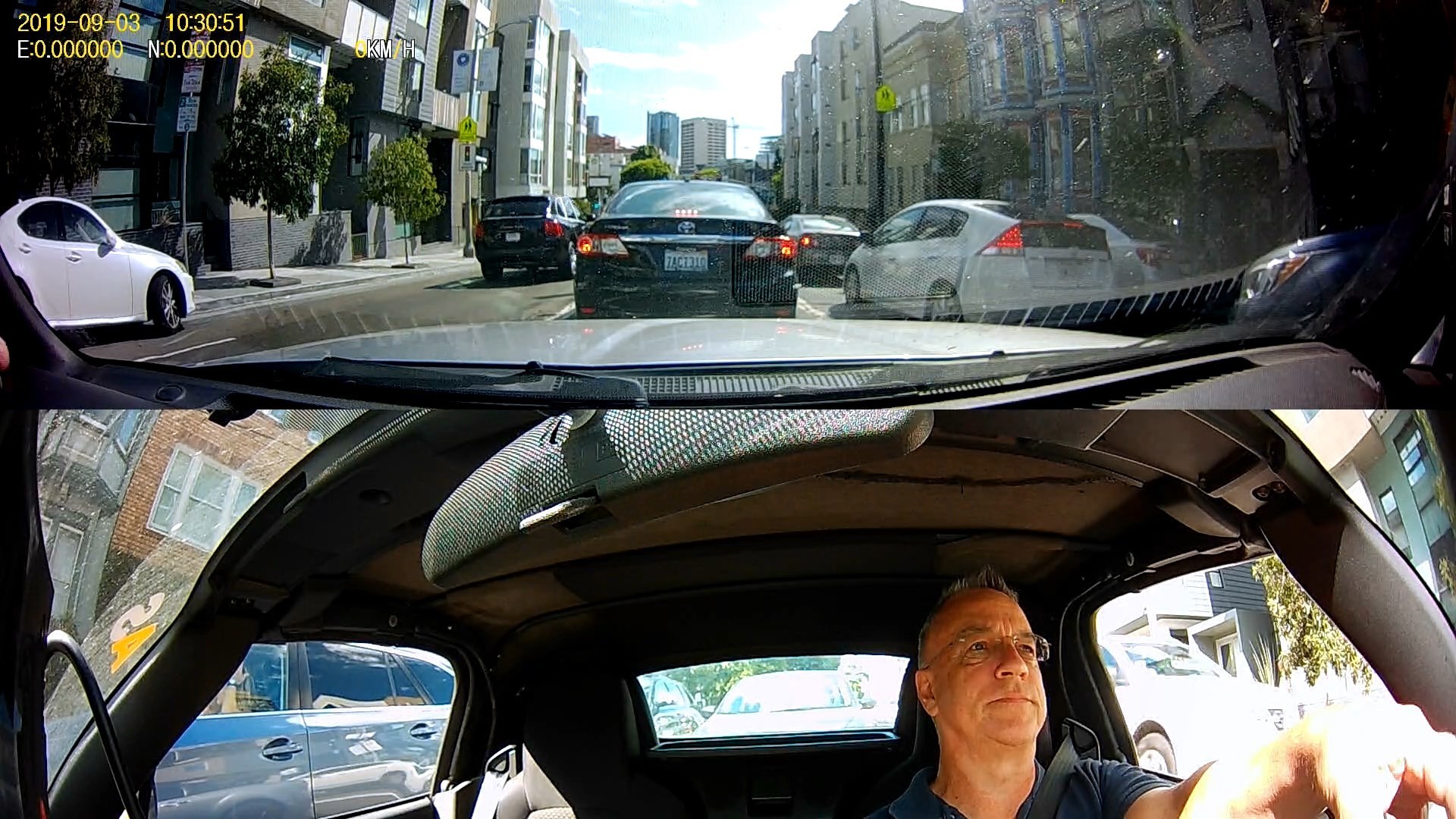 You can see above that the camera is focused for details close in, and will capture a lot of action to the side, but because of blockages from roof pillars, etc., may not show much of what happens behind you. Details such as license plates of the cars behind you, even when visible, may not be sharp enough for use as legal proof. 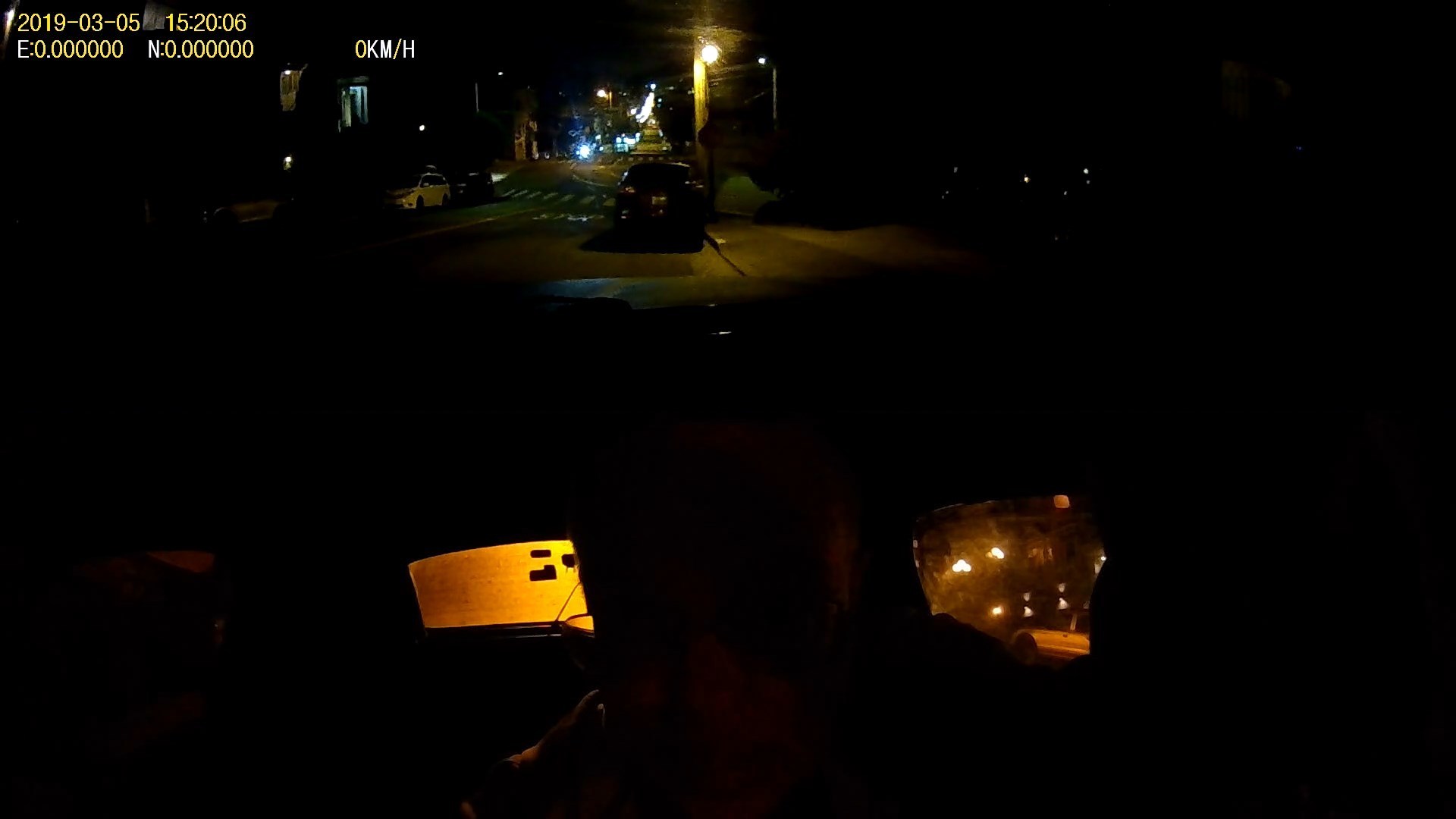 As you can see above, night interior video is basically useless without lighting, while the exterior night video is sub-par as well.

All told, the G1 380° is a fascinating concept that would work far better with three cameras, front/interior/rear or rear telephoto, rather than the two provided. As it stands there’s too much blockage from the car itself (unless you’re in a convertible with the top down) to capture events at angles to your rear quarter-panels. Night video is weak, and even during the day, the video quality fades so badly at distance that there’s no guarantee that what the camera captures to the rear will reveal enough detail to be legally useful.

I’ll give Soliom an A-plus for thinking outside the box, but the follow-through is a C-minus at best. The video to the rear might not be up to the job; GPS is teased but not delivered; and interior night captures are just about useless. The unit should also let you lock in front-only or interior-only video if that’s what you need.

That said, the G1 380° is the only dash cam I’m aware of that captures day action to the sides of your vehicle adequately. If that’s paramount to you, then you can probably live with the rest. But I’m hoping the company completes the clever concept with a new product soon.

Capturing split-frame video that shows everything happening around your vehicle is a very interesting and useful concept, but the video quality is weak.

Don't miss a deal at House of Fraser
Best offers at Bodybuilding
Discounts, Sales and Deals at Carphone Warehouse
Save your money with Nike DE
Online-Shopping with Newegg
Best products at Marks and Spencer
Latest Posts