If you’re a phone-centric user looking for a secure drive that matches your lifestyle, then you definitely need to take a look at the SecureDrive BT SSD. Unlike other secure drives, which rely on a keypad or an client app on your PC to unlock them, the SecureDrive BT uses an app and Bluetooth, the wireless connectivity that’s available on every modern phone and mobile device.

Even beyond lifestyle and convenience, managing the drive using your phone or mobile device may also be the most secure way to do it. And that’s what corporate and government buyers, the real target audience, are more concerned with.

As I said, the SecureDrive BT uses Bluetooth and the Android/iOS app for unlocking the drive. But it doesn’t transfer data via BT, so it’s basically just a USB drive with a new approach to access. The drive, as all do, locks itself automatically when power is removed, so you don’t even need the app for that. Is this approach handy? I’m not in any way shape or form phone-centric, yet I prefer using my phone for the task for several reasons.

For one thing, keypads on hard drives are rarely as easy to use as they look. Generally, they’re designed not to show wear patterns (which make it easier to steal PINs) and aren’t easy to press. I’ve mis-entered PINs more times that I care to count. But even without wear patterns, traces from your fingers are a dead giveaway to forensic pros.

Then there’s client software, which is often used to unlock and administrate secure drives. Personally, I’d find it more convenient if there were some, as my computers have Bluetooth. But as SecureData, the vendor, pointed out, software is vulnerable to key trackers and other exploits. If the company made it available, some enterprising soul would, of course go, against their own company’s policy and install it, so SecureData simply forgoes it.

Also, some secure drive client software I’ve seen goes to such great lengths to prevent hacking, by shifting the keyboard after every digit or some other trick, that it’s a colossal pain to use. Far worse than pulling your phone out of your pocket and pecking a few digits.

Of course, there are secure sites where phones aren’t allowed, so in that scenario, you’ll need a secure drive sporting a keypad, something SecureData also makes. 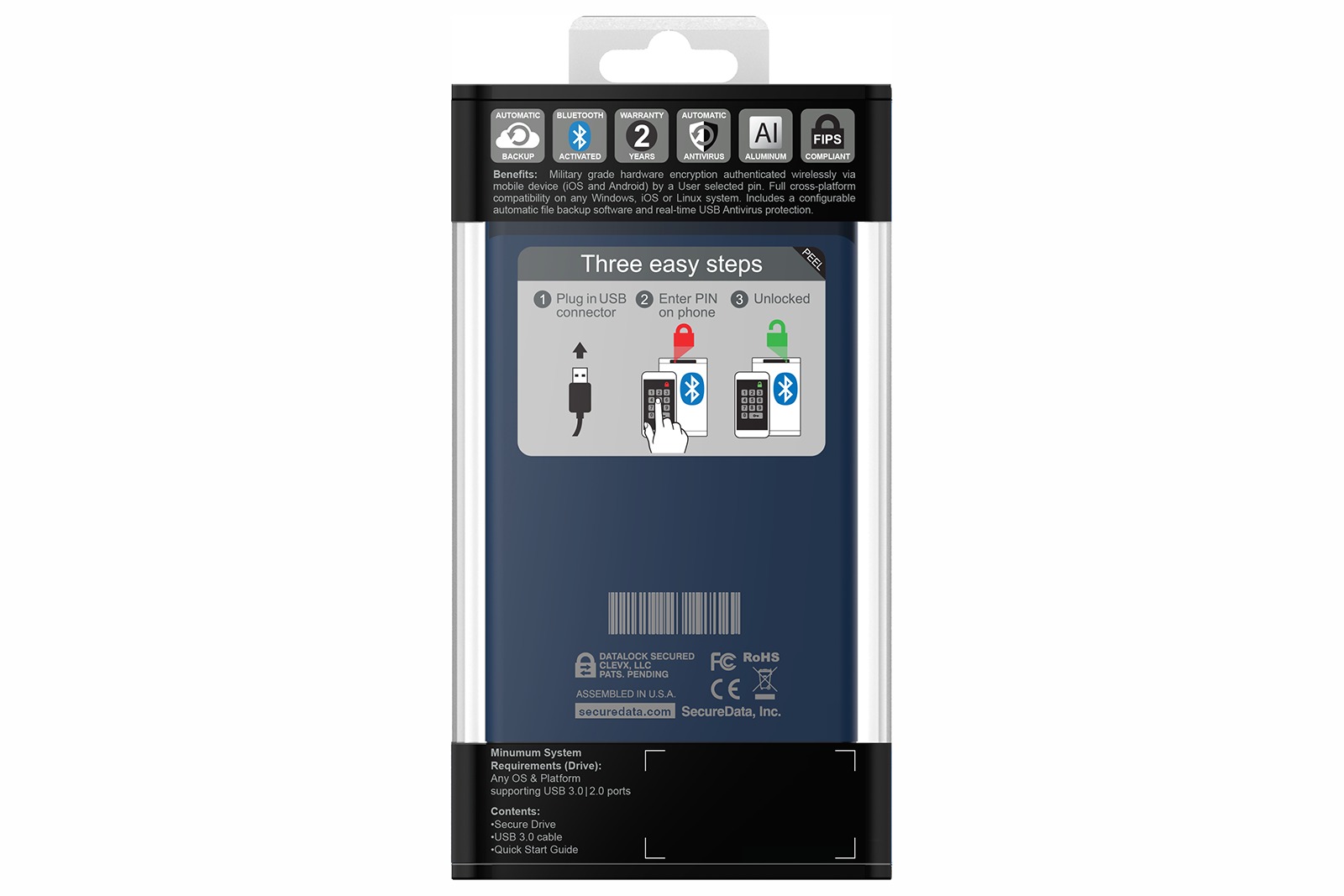 Other advantages to the keypad-less approach are a bit more stealth and style. The SecureDrive BT looks like your average drive, except of course for the “secure drive” label. Okay, well at least there’s no keypad to muck up the looks. I found the dark-blue model I tested quite attractive.

It’s also rather slim for a secure drive. measuring approximately 5 inches long, 3 inches wide, and is just shy of a half-inch thick. It’s not particularly light, due to the epoxy used to seal off components and prevent tampering. I like its above-average heft. Some may not.

I went hands-on with the $509, 1TB SSD model (available from B&H), which as all of the models, is FIPS-140 Level 3 certified. That basically means the drive meets the federal government’s highest practical (no self-destruct) security standard for data storage. You can read more about FIPS here. The drive is also remote management-ready, and SecureData provides that service as a pay option. Additional SSD capacities are 250GB for $289, 500GB for $359, 4TB for $1,709, and 8TB for $3,309.

Hard drive models are available as well, in 1TB, 2TB, and 5TB flavors for $259, $309, and $509, respectively. They’re relative bargains, though not as hardy as an SSD, and expensive compared to non-secure drives. Secure always costs more, especially if it’s FIPs certified, a somewhat expensive process.

Note: The SecureData BT is based on ClevX’s DataLock BT technology. You may see products from other vendors sporting it. Indeed, the phone app is called DataLock. Speaking of which…

The iOS/Android app used to unlock the SecureDrive BT is simple and well done, allowing you to unlock the drive and perform administrative tasks such as changing the password, adding a timeout, etc. The app automatically recognizes the presence of SecureDrive BT drives, but you must “pair” the drive by entering an ID located just above the USB port. In my testing, the drive paired with Bluetooth quickly and reliably. After that, there’s not a lot involved. 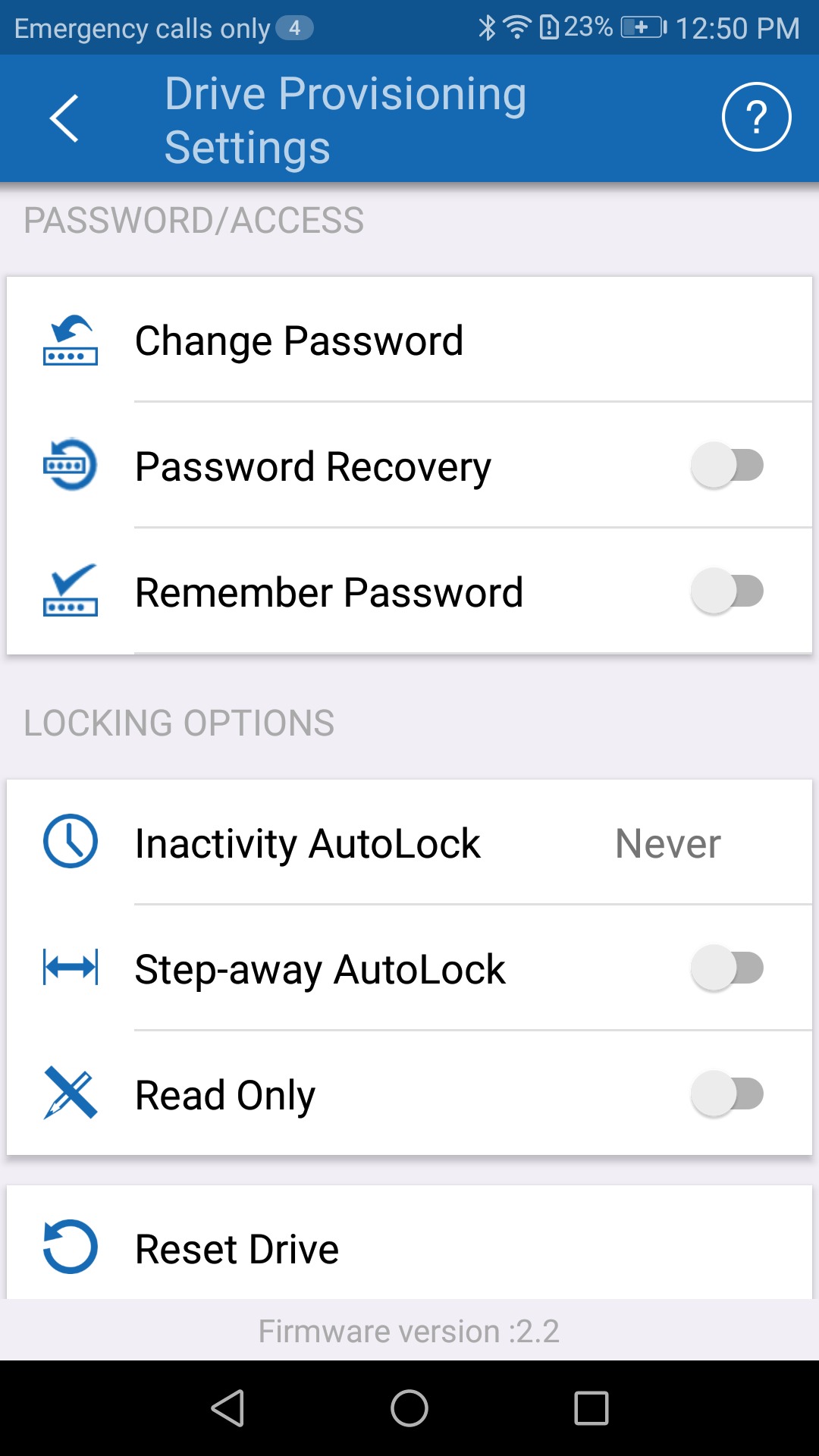 With secure drives, factors are in play that don’t concern a plain-vanilla external drive. Encryption can slow performance, and makes the chip in the drive work much harder, producing more heat. The tamper-proofing epoxy surrounding components, if not done properly, can act as a blanket, inhibiting heat dissipation. If things get out of hand, the firmware will step in and slow things down, or may even throttle the drive from the get-go simply to avoid the situation entirely.

I’m not saying that’s why the SecureDrive BT is only USB 3.1 Gen 1/5Gbps SSD, rather than Gen 2/10Gbps, but the thought certainly occurred to me. Most recent external SSDs I’ve tested are Gen 2, which allows much greater throughput, as you’ll see in the charts. Not that the SecureDrive BT is slow…

Fortunately, while the encryption might affect performance slightly, I saw no heat-related throttling. I had no other USB 3.1 Gen 1 (5Gbps) external SSDs to compare the SecureDrive BT to, but I can tell you that it is on a par with or better than the older Samsung T1, which was USB 3.0 5Gbps. 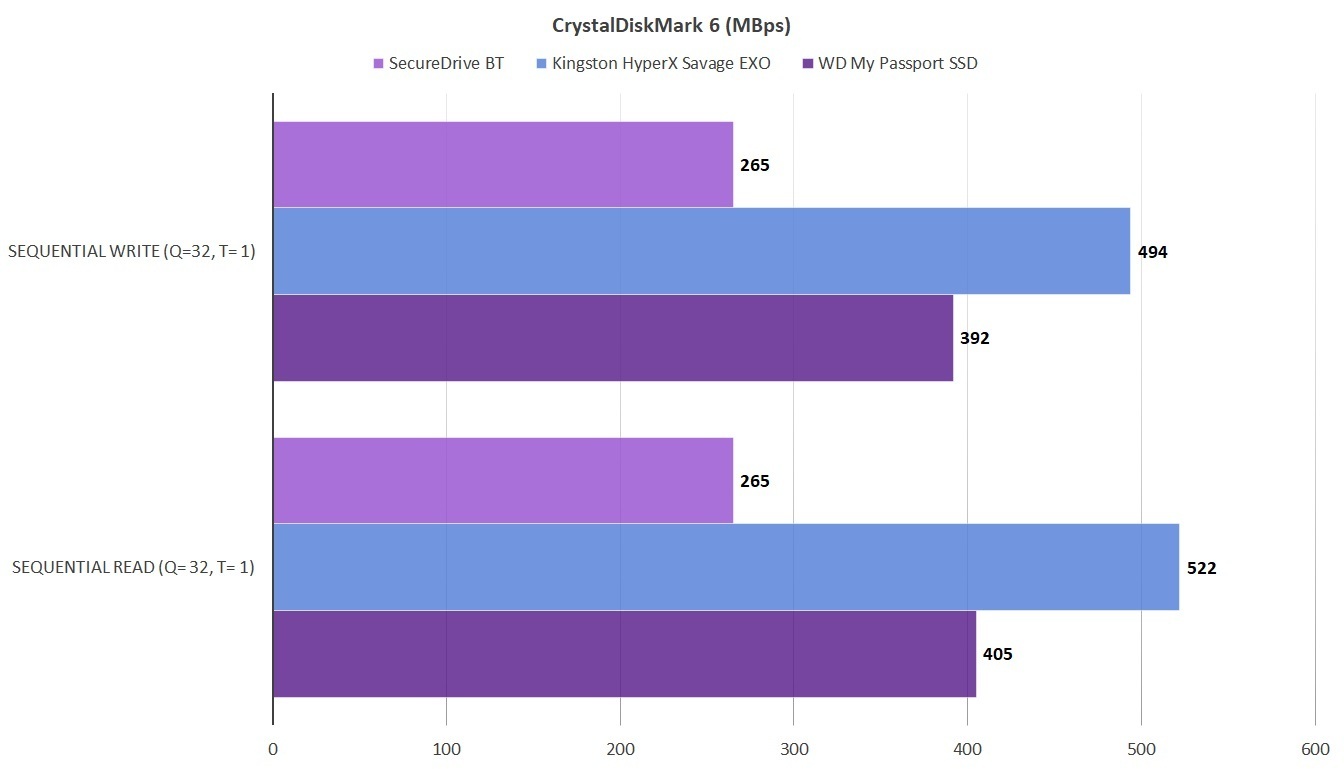 Don’t worry too much about these charts. They’re a bit of an unfair comparison given that the other two drives are USB 3.1 10Gbps. As you can see below, the SecureDrivek BT features much faster seek times. The caching and specifics of the internals weren’t provided, but it screams large cache. Whatever the reason…nice. 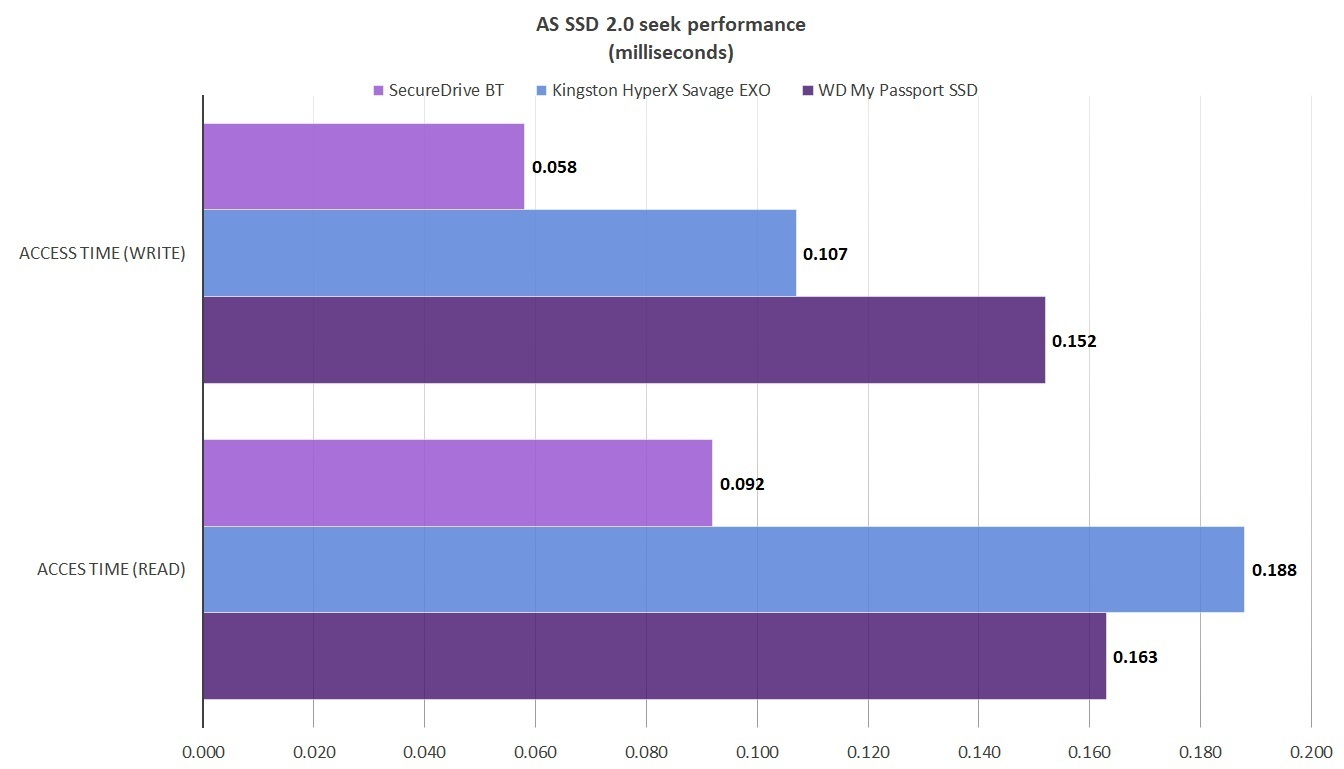 The SecureDrive BT SSD actually fared a lot better against the Gen 2 competition that you might expect, outperforming them a couple of times. To be fair, the Kingston and the WD aren’t the fastest external SSDs available–that would be the Samsung T5. But the NAND in use and the way it’s treated have a lot to do with performance. ClevX obviously designed or chose theirs wisely. 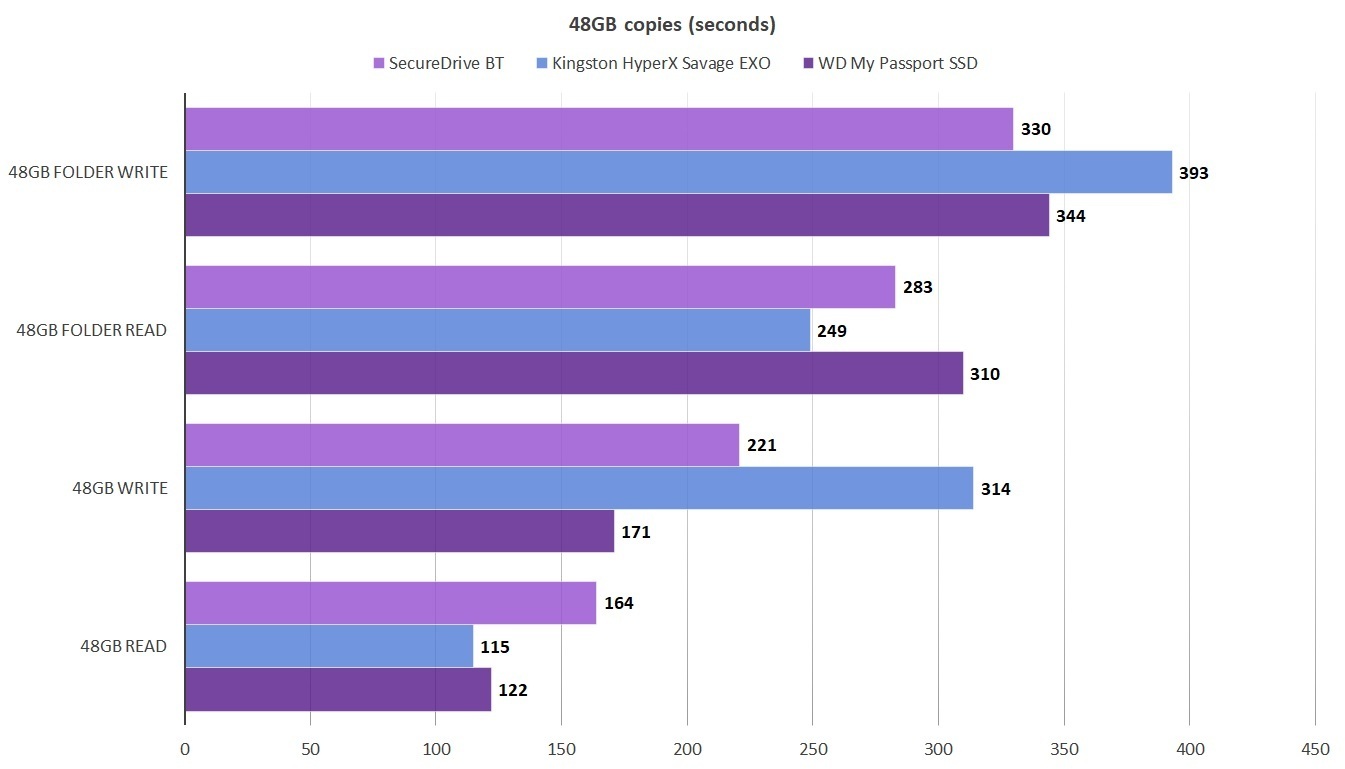 In many cases, phone apps are no more efficient for performing tasks than other means. They’re simply provided for users who can’t ditch their phones for a second without a panic attack. However, in the case of the SecureDrive BT, it makes a lot of sense, and is nearly as fast as a keypad. Throw in the idea that it’s quite likely the least hackable method of access, and you have a great product. Not cheap, but secure drives never are.

Using your phone to unlock the SecureDrive BT is no less convenient that other means, and it fits right in with the modern lifestyle. Throw in good looks, FIPS 140-3 certification, and good performance, and you have one of our favorite secure drives on the market. As with all secure storage, however, it’s expensive. (Cheaper hard drive models are available.)

Don't miss a deal at Currys
Best offers at Intuit Small Business
Discounts, Sales and Deals at Sephora
Save your money with Farfetch
Online-Shopping with Nike DE
Best products at Ancestry
Latest Posts