Scout Video Doorbell review: More bells and whistles than you might expect for the price

A video doorbell is one of the quickest and easiest ways to beef up your home’s security, whether you’re at home or away. A hardwired model like the Scout Video Doorbell will save you the trouble of recharging a battery—and it eliminates the risk that the battery will die when you’re tucked into your bed not at home.

If your home isn’t wired for a doorbell, on the other hand, or if you want to install a doorbell at a different location than where your existing device is, you’ll need to use a battery-powered model (or fish wire to that new location).

Scout is no stranger to home security. We reviewed the Scout DIY home security system in early 2017. You can use the doorbell in conjunction with that broader security system, but you don’t have to—and that’s good, because we like its doorbell a lot better. While it has some features you might not expect to get at this price, we also encountered a few annoying software glitches that prevent us from recommending it over something like the Nest Hello or the Ring Video Doorbell Pro (even though those devices are considerably more expensive).

Installing the Scout, on the other hand, was a breeze. If you’re replacing an analog wired doorbell, as we did for this review, you won’t even need a power adapter to install this one. Most video doorbells require you to route the existing doorbell wiring through a secondary power adapter, which adds time and complexity to the process. The Scout needs an adapter only if you’re wiring it to a digital system. You’ll need to know which type of system you have before your order the Scout, since the company sells them as different SKUs: The analog version sells for $99 and the digital model goes for $105.

Both models come with white, silver, and black faceplates, but we were disappointed to discover that Scout doesn’t provide alternative angled backplates to accommodate non-flat walls. Nest, for example, provides angled backplates that shift the camera’s field of view up, down, or to the side if needed to compensate for the surface it’s being mounted to. Put the Scout on narrow clapboard or shingle siding and it might not be able to capture visitors’ faces properly. 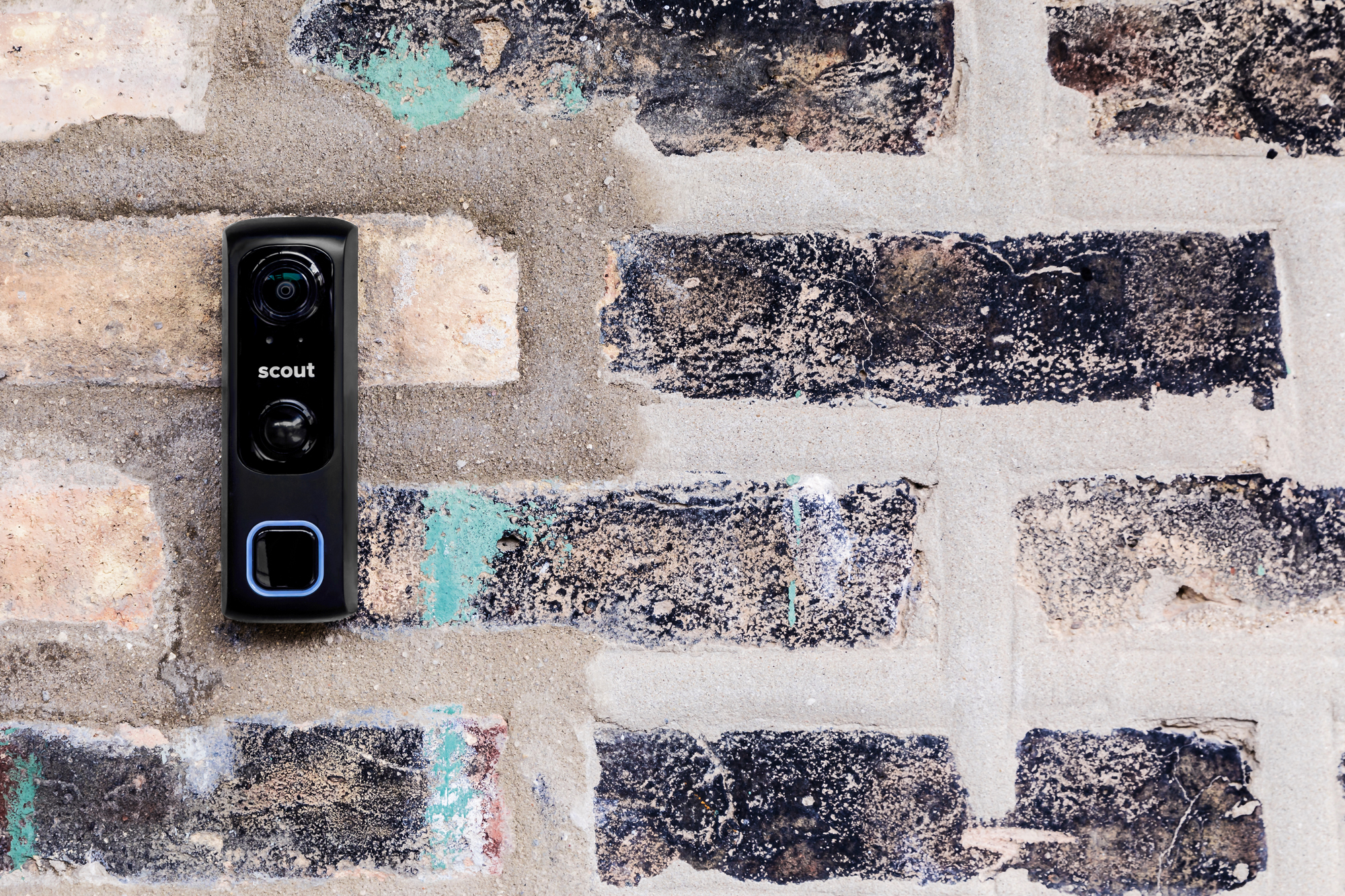 You’ll need to download the Scout Alarm app on your smartphone or tablet to install the Scout Video Doorbell; but as I mentioned earlier, you don’t need to own an entire Scout Alarm system to deploy the doorbell. The app has a very straightforward user interface with a timeline-based n activity log. And unlike most of Scout’s competitors, you don’t need a paid subscription in order to access older recordings; in fact, you can access a full two weeks’ worth of alert footage without paying an extra dime. Compare that to Ring, for example, that only lets you view a live camera feed unless you cough up the cash for a cloud-storage subscription.

The Scout Video Doorbell’s 1080p video was of excellent quality during the day and at night, with minimal fisheye distortion. The onboard microphone was surprisingly sensitive, picking up sounds from not just the porch where it was installed, but from all around the front yard.

One of the biggest shortcomings with most video doorbells is their inability to distinguish a human being from any other animate object. Even models with facial recognition do a relatively poor job of discerning the difference. Scout focuses heavily on this aspect of its product, having developed an algorithm that’s remarkably good at sending alerts only when there’s a person on your porch, and ignoring motion associated with blowing leaves, swaying tree branches, the rain, and similar phenomena. Now it wasn’t flawless in this regard—cats jumping on the porch railing would often result in a false alarm—but it was better than anything else I’ve tried.

I did encounter several performance issues with the app. At times (both while viewing the footage recorded in response to motion alerts and while viewing the live feed), the app running on my Android phone would hang while trying to load the video. Going back to the main screen and trying again typically resolved the issue, but that’s a hassle that can be doubly irritating when you hear a noise outside and you want to get a quick view of your porch. And since the app is designed to control the broader Scout home security system, you’ll see lots of buttons and controls that are meaningless to folks who don’t own that hardware.

That broader system has hooks into the Amazon Alexa and Google Assistant ecosystems, but the video doorbell does not—at least not right now. Scout says it’s adding the ability to stream video from the doorbell to Amazon and Google smart displays, and it’s working on enabling smart speakers to chime when a visitor pushes the button on the doorbell, but you can’t get those features today and Scout doesn’t have a firm timeline as to when you will.

We do like the option of having the doorbell play canned messages when someone rings: “No one is available”, “You can leave it”, and “Just a moment” are your three choices. When we used the doorbell’s two-way audio to speak with someone on the porch, we encountered a two- to three-second delay, even when the smartphone with the app was on the same Wi-Fi network as the Scout.

The Scout Video Doorbell certainly isn’t perfect. The app has issues like lag, and there’s no connectivity with virtual assistants. The video and audio quality is excellent, though, and the cloud storage is surprisingly generous. Most importantly, the ability to better discern humans from other moving objects noticeably cuts down on spurious alerts.

A couple of firmware and app updates could make the Scout Video Doorbell a best-in-class product, but it’s still a good value at this price.

Don't miss a deal at TalkTalk Phone and Broadband
Best offers at Marks and Spencer
Discounts, Sales and Deals at Intuit Small Business
Save your money with House of Fraser
Online-Shopping with Argos
Best products at Argos
Latest Posts