Well, that didn’t take long. A few short weeks after reviewing the Samsung T7, SanDisk’s Extreme Portable Pro SSD (1TB) showed up at our door and easily surpassed its rival for the top-performing USB 3.1 Gen 2 drive. SanDisk’s drive doesn’t offer the T7’s handy and fun fingerprint security, but it’s about the same price and offers software-based password protection if security is a concern.

The Extreme Pro Portable SSD is a bit larger than the previous iteration, measuring approximately 0.4 x 2.25 x 4.34 inches, but it’s still compact enough to reside comfortably in a shirt pocket. Unlike the Samsung T7 competition, there’s an attachment point (a very large one!) for a lanyard or key ring.

The Extreme Pro Portable is designed with an aluminum chassis and ABS top, and is IP55-rated (Ingress Protection), meaning it will fend off dust and low-pressure water. The ingress weak spot with storage devices has historically been the connection port, but Type-C ports, such as the one on the Extreme Pro, are far better sealed than previous types. 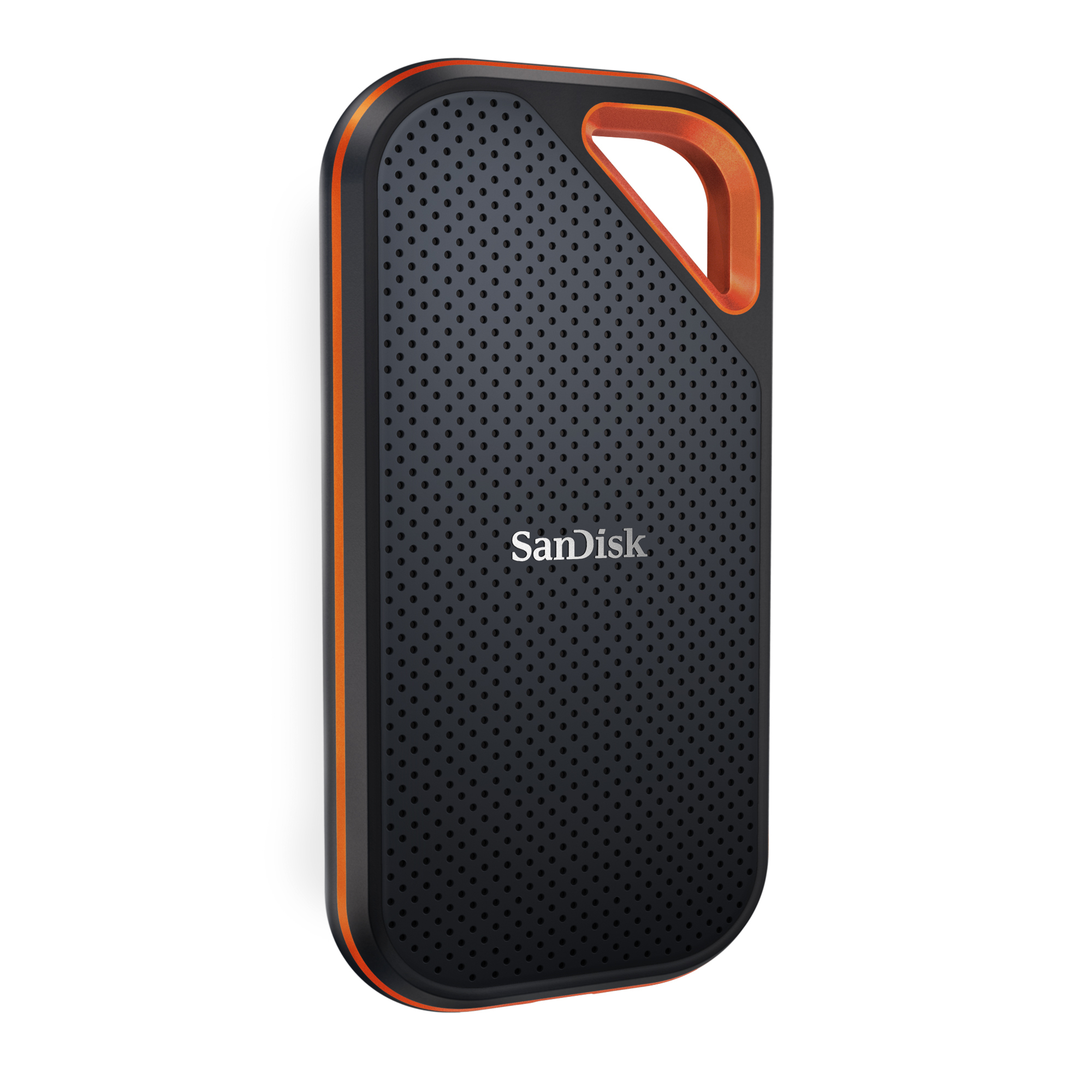 The Extreme Pro Portable SSD lacks the fingerprint reader that graces the Samsung T7; however, it does come with SanDisk’s own SecureAccess software security solution. It provides password protection for the drive’s 256-bit AES encryption (when enabled), though it must, of course, be installed on any device or PC from which you wish to access your data—not as convenient. Neither drive is FIPS 140-2 certified (Federal Information Processing Standards security), which will limit enterprise interest and rule it out for conforming government agencies.

Why is the Extreme Pro Portable so fast? While it does transfer data via speedy USB 3.1 Gen 2 (10 gigabits per second), it’s likely far more important that the internal storage uses the NVMe communications standard, instead of the slower SATA standard used by its Extreme Portable SSD predecessor. Beyond that, SanDisk offered no details, and I didn’t want to destroy the drive to find out what’s inside.

SanDisk squeezed a lot more performance across the board from the Pro version, so much so that it’s the fastest USB SSD that we’ve see to date. Burst performance is roughly on a par with the Samsung T7’s, but it blows that drive out of the water during long writes. All the results shown below are from the 1TB version SanDisk sent us. 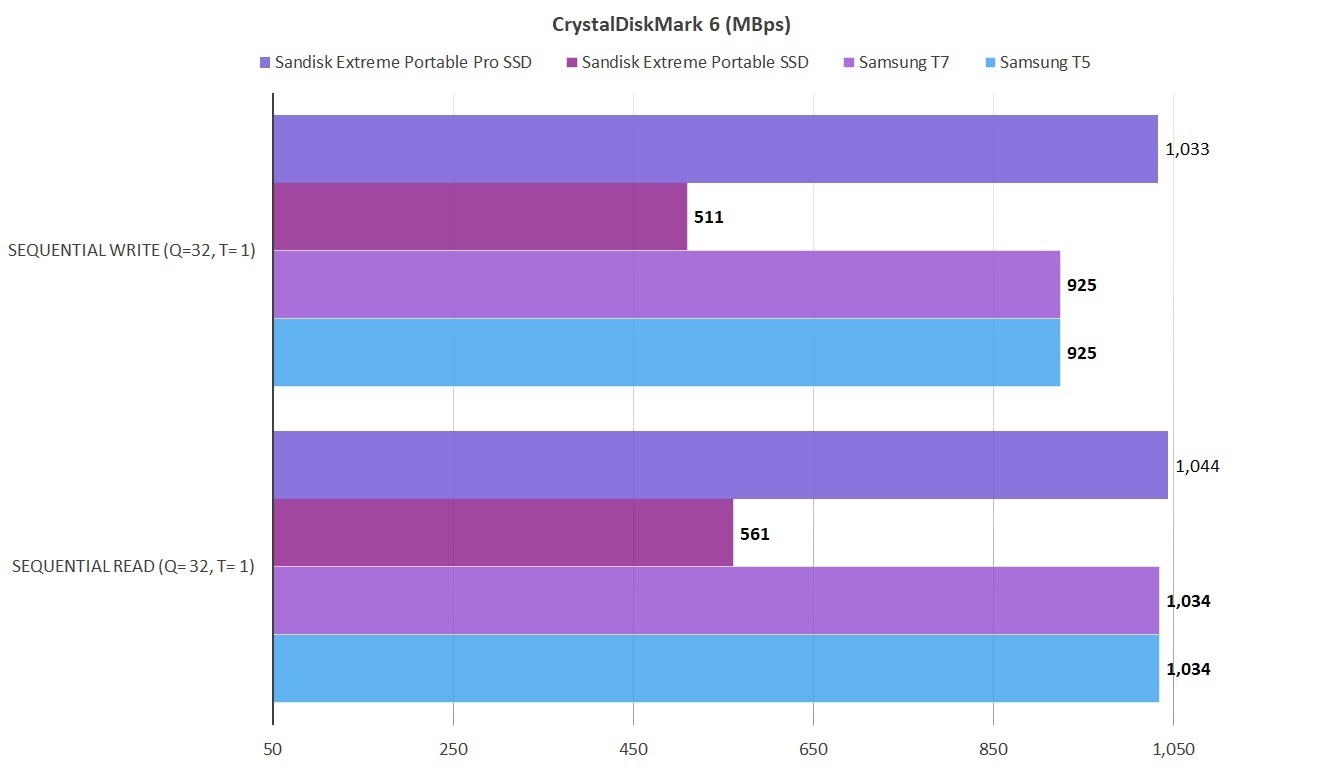 CrystalDiskMark 6 rated the Extreme Pro, Samsung T5, and Samsung T7 drives nearly equal, but as I just noted, real-world testing revealed a distinct advantage for the Extreme Pro during long writes. In the 48GB write tests shown below, this sway was apparent… 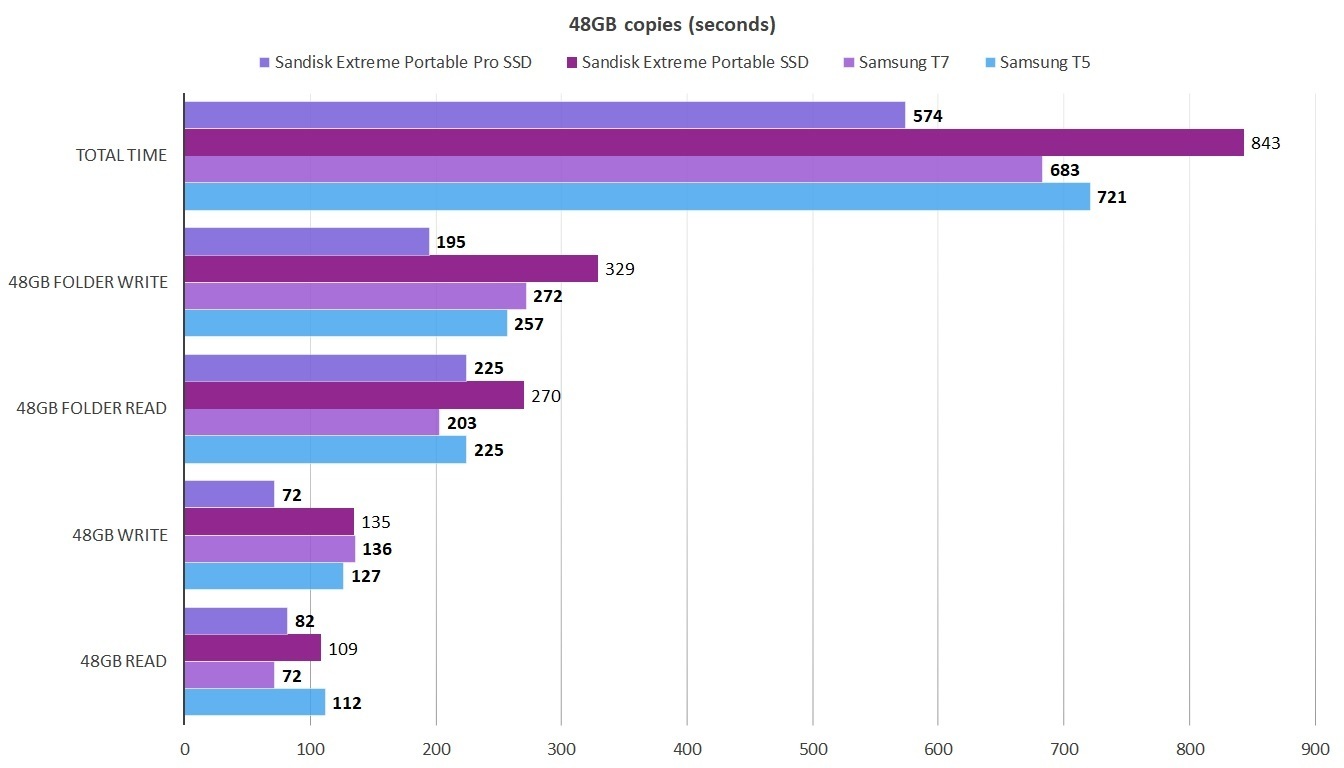 Those are eye-opening results, however, check out the 450GB write numbers below, where the advantage became overwhelming. 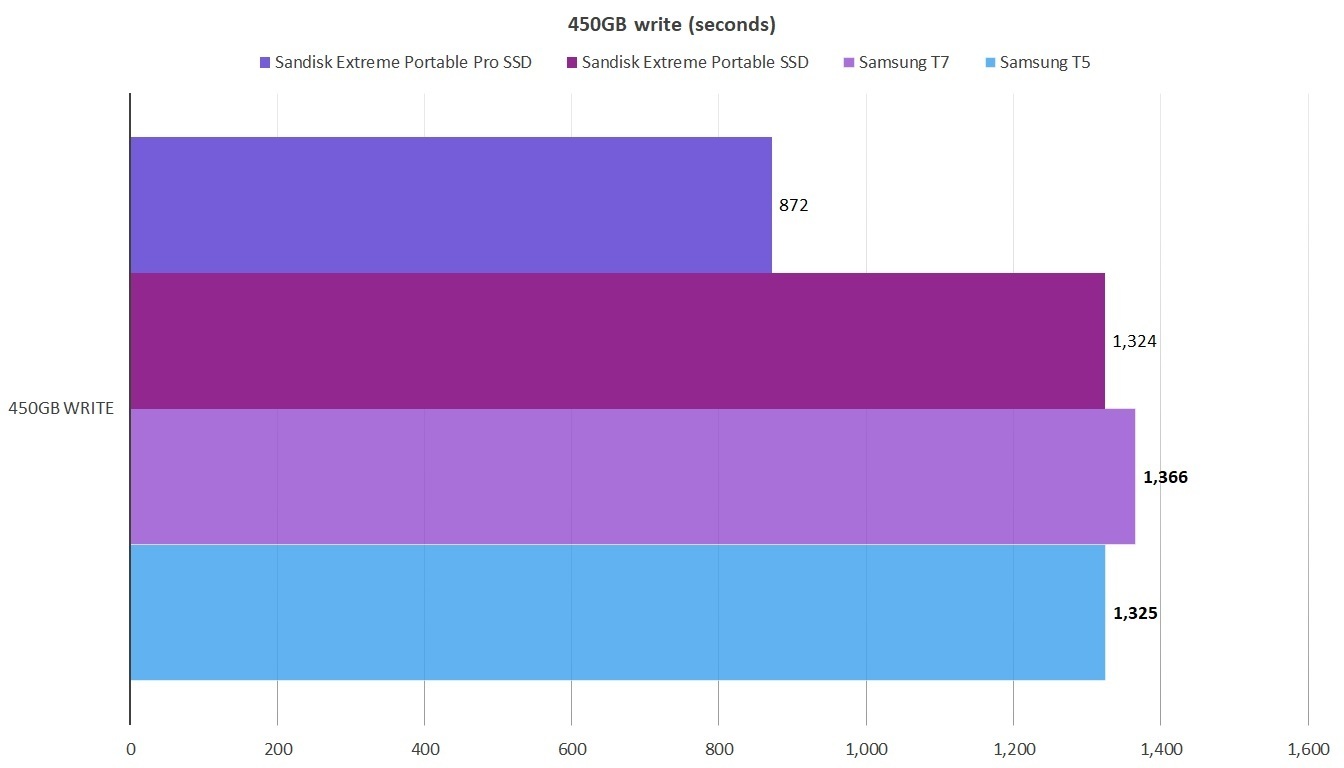 The primary reason for the landslide victory was that the Extreme Pro Portable wrote at a relatively steady 600MBps or so, while the T7 started at over 500MBps and dropped to around 300MBps when it ran out of cache. That occurred at around 4 percent of total capacity, or the 20GB mark with the 500GB T7 we tested. More capacious models of the T7 will run out of cache later in the process, narrowing but not eliminating the margin of defeat.

The Samsung T7 is a slightly faster reader, but being a distant second writing really hurt its conglomerate score in the 48GB tests. How much the slow writing will affect you depends on how you use your drive. For small amounts of data, the difference won’t tell. However, the time you’ll save on writes with the Extreme Pro Portable will tell over the long haul.

The SanDisk Extreme Pro Portable SSD is the fastest writer we’ve seen by far. It’s IP55-rated to fend off dust and water, affordable for its ilk, and we even like the looks. Unless you want the fingerprint security offered by its Samsung T7 rival, this is the drive.