The Samsung 870 QVO (‘Q’ as in in 4-bit QLC), is our first look at a drive that will eventually ship with a whopping 8TB of NAND on board. Announced Tuesday, this is the new top capacity available, superseding a still-new flock of 4TB models. Samsung sent us the 2TB version for testing. It’s a great everyday performer; however, when you run out of cache (which shouldn’t be often), write pace falls off drastically. 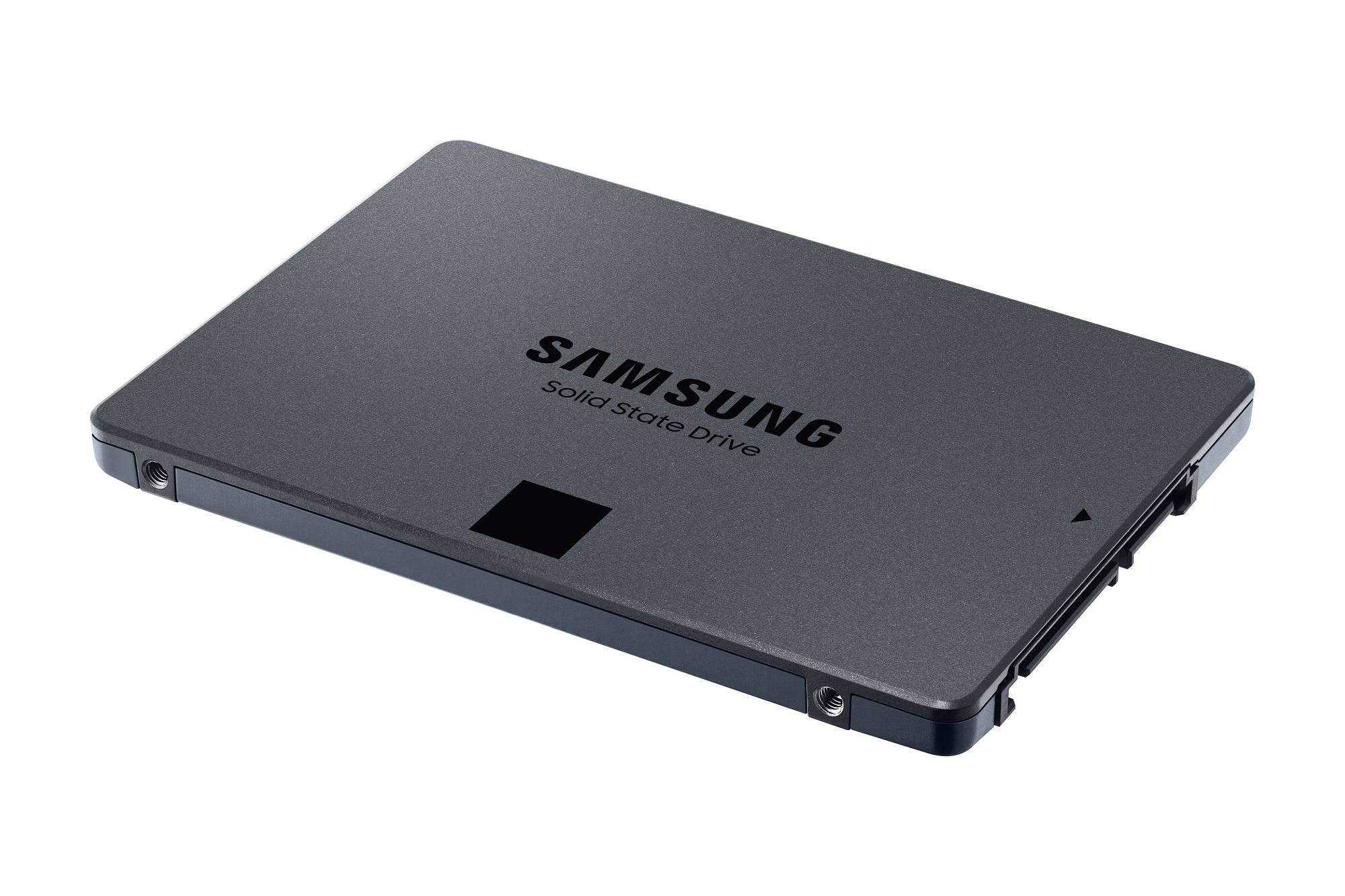 Samsung uses its own MKX controller, and there’s 1GB of DRAM cache for each 1TB of 96-layer, QLC (Quad-Level Cell/4-bit) stacked/layered/3D NAND on board. The drives seemingly allocate about 4.5 percent of the NAND as SLC cache, if our tests with the 2TB drive are indicative.

SLC cache is MLC/TLC/QLC treated as SLC by writing only one bit instead of four, or if you prefer, on/off rather than one of 16 possible states. This is much, much faster operation, as there’s little to no error-checking required. The contents of the SLC cache are later transferred to non-cache NAND.

The 870 QVO is warrantied for three years, and is rated for 360TBW (TeraBytes Written) per 1TB of capacity. Samsung bundles its Magician software, which provides control of overprovisioning (the amount of NAND set aside for replacement of dead cells), secure erase, and diagnostics.

First, the good news about the 870 QVO’s performance—and in truth, good news is all the average user will encounter. CrystalDiskMark 6 measured the drive as matching the speed of the competition. Most SATA SSDs already bump up against the bus’s 6Gbps bandwidth limitation—hence, the nearly identical scores. 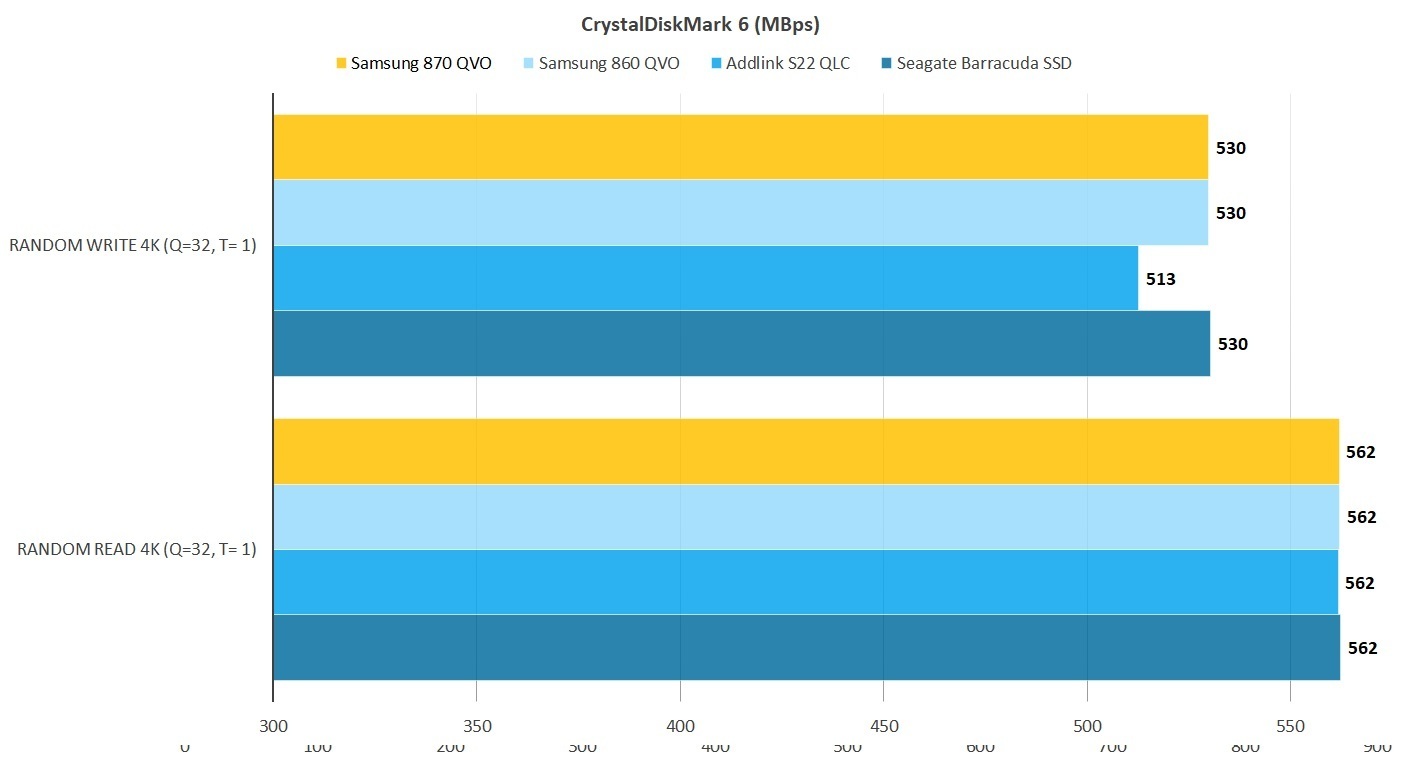 In the real-world 48GB transfer tests, the 2TB 870 QVO improved over its older 860 QVO sibling. However, the 860 QVO we tested was a 1TB drive that ran out of cache at about the 45GB mark (I discussed the 4.5 percent cache), dropping to 75MBps for the last leg of the race. 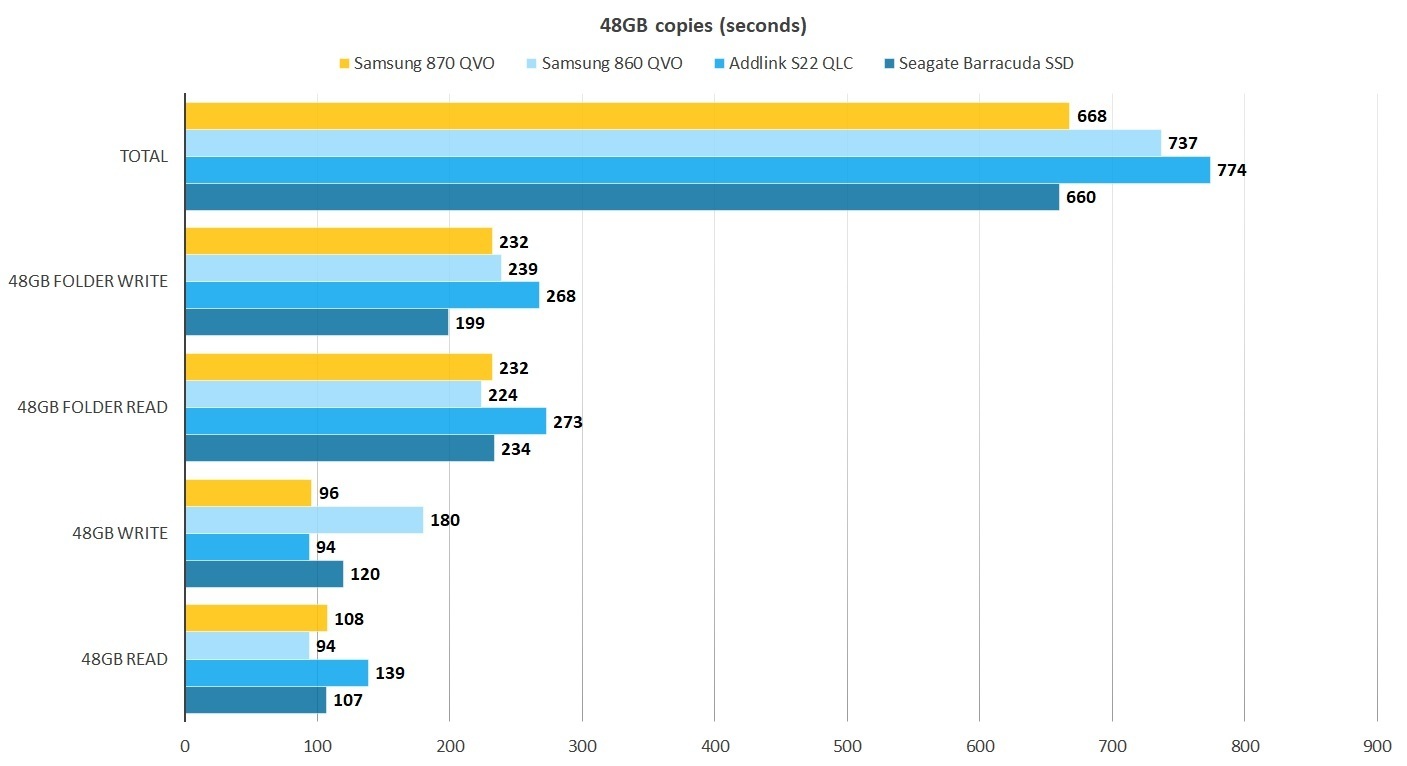 The 1TB 870 QVO would no doubt have run out about the same time, but it probably still would have turned in a slightly faster score than the 860 QVO because of its faster write rate, off cache.

Where things turned a bit sideways was in the 450GB write, a test we’ve been running for a while as drive capacity and the amount of cache provided skyrocket. As you can see below, the 870 QVO was faster than its predecessor, but still far slower than the other drives. 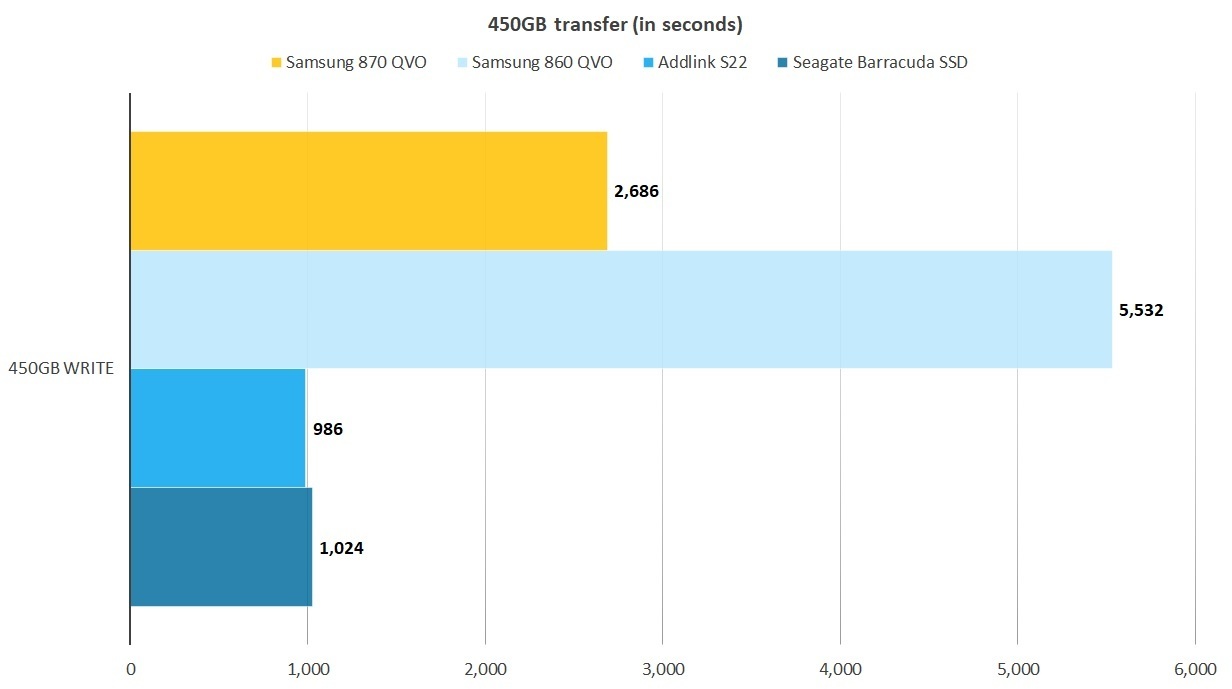 You can see in the capture below exactly why the Samsung QVO drives are so much slower writing the extra large 450GB file. When out of cache, the 870 QVO drops to 150MBps, while the 860 QVO drops even further to a paltry 75MBps.

While the 870 QVO clearly isn’t the drive for writing lots of large amounts of data, how often will you actually do that? Once in a blue moon, if at all. The slowdown is painful when it occurs, but you’ll likely not see it in the larger capacities. The DRAM makes the drive very responsive while running an operating system, with its myriad small file calls.

The Samsung 870 QVO’s capacity is great, as is its everyday performance. You’ll likely be perfectly happy with the drive if you install it in your laptop or PC as the main drive. But 8TB? Come on now. That’s pretty sweet. Just be aware of the severe dropoff in speed when writing outside of the cache.

The Samsung 870 QVO SATA SSD offers great everyday performance combined with up to 8TB of capacity. However, while it’s faster than its predecessor, its write performance after running out of cache is extremely weak.

Don't miss a deal at Go Daddy
Best offers at Bodybuilding
Discounts, Sales and Deals at The Home Depot
Save your money with Nike DE
Online-Shopping with Farfetch
Best products at Microsoft Store
Latest Posts