In the bad old days before LCD screens became affordable, your monitor used to be the biggest thing on your desk. It was feet deep and weighed as much as a large sack of potatoes. By comparison, most modern LCD monitors are positively skinny but, still, some people are never happy – and that’s where the Samsung Space Monitor comes in.

It’s a monitor for people who hate clutter, with an arm that cleverly minimises the amount of space the screen takes up on your desk. It’s not the first time a manufacturer has done this – Dell’s U2717DA is among a handful of examples to have come and gone over the years – but the Samsung does look to be the most elegant so far.

Samsung Space Monitor review: What you need to know 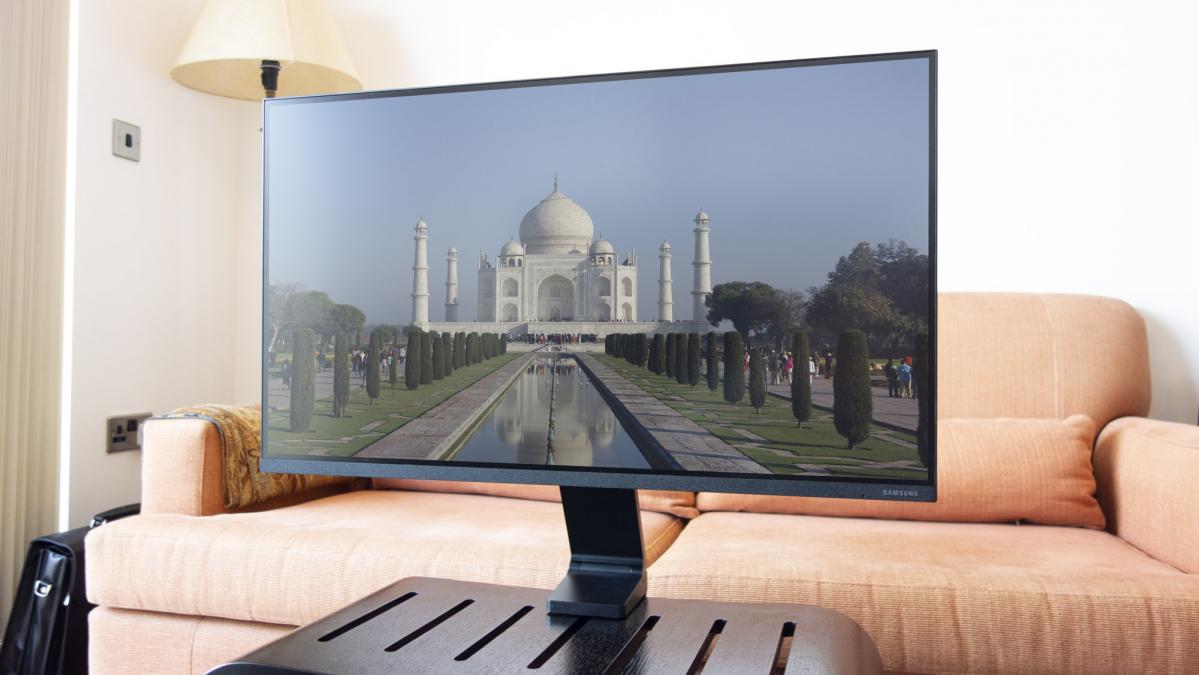 The premium you’re paying is for the monitor’s exceptional space-saving design. Unlike traditional monitors, which sit on the surface of your desk, you have to mount the Space Monitor using a clamp that attaches to the rear of your desk. This clamp still occupies a small, semi-circular area of desk space, but it’s minimal compared with a normal monitor. 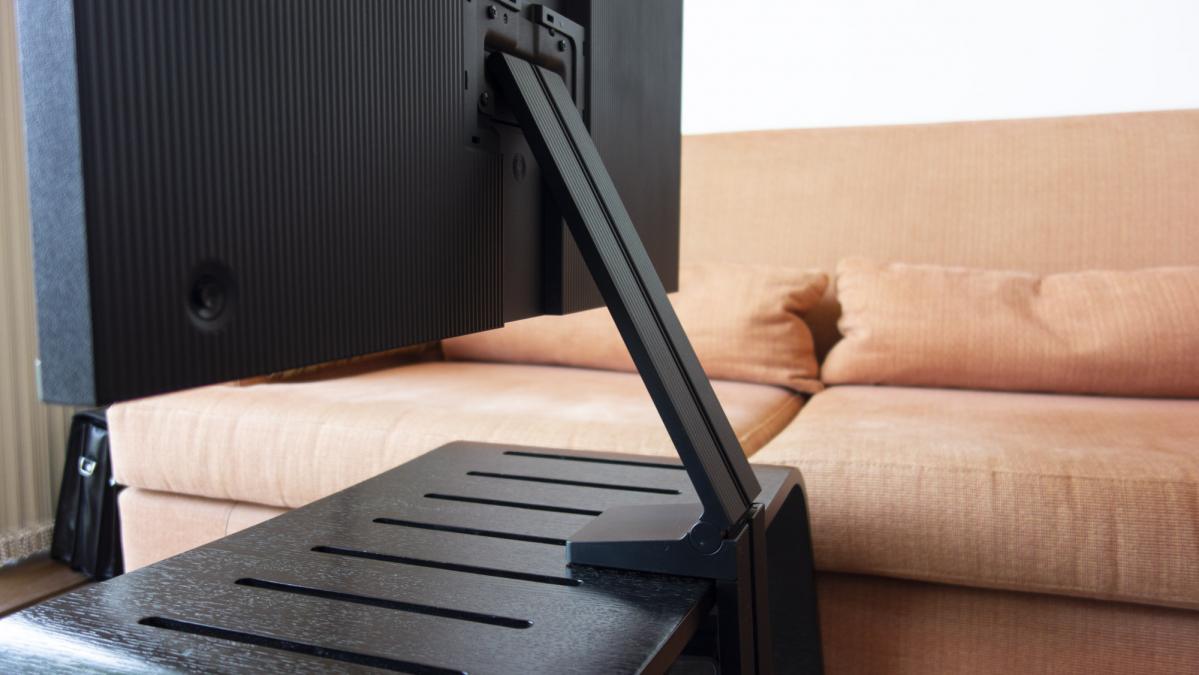 Better still, the hinged arm that links the screen with the desk clamp offers a huge amount of flexibility. If your desk is backed up against a wall, the design of the arm is such that it will sit flush when it’s not in use, taking on the appearance of a small, wall-mounted TV, with all cables tucked neatly away within the arm itself.

When you need it, it can be effortlessly pulled towards you and, despite the unusual design, you still get between -5 and 20 degrees of tilt and 184.7mm of height adjustment. And throughout the monitor’s design, it’s refreshing to see Samsung has retained minimalism as an ethos. The three-sided bezel-less frame minimises the monitor’s silhouette, while its textured rear panel and frame ensure it looks great from any angle. 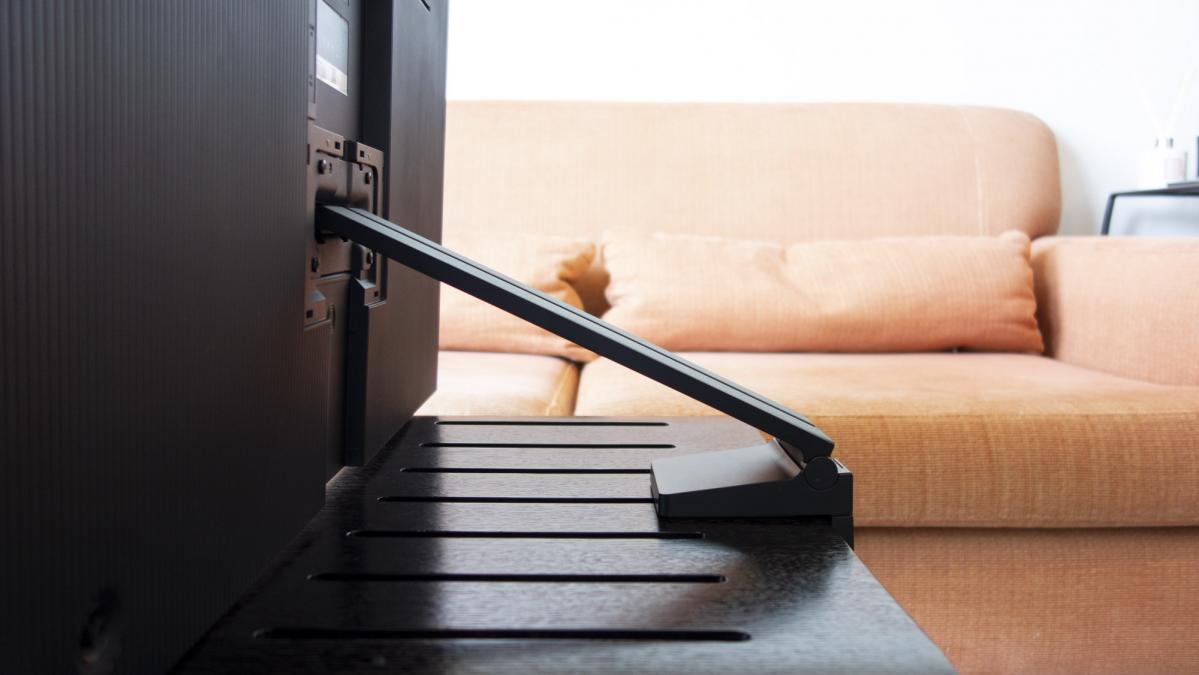 There are some limitations here, though. You can’t, for instance, have it sitting at its peak height when it’s fully extended, nor can you pivot or rotate the display. It’s also worth checking whether your desk is compatible. While the clamp will fit desks up to 90mm thick, it will only work if there are no impediments to the clamp underneath. So, if you have a fancy Ikea desk like mine, you may want to reconsider. 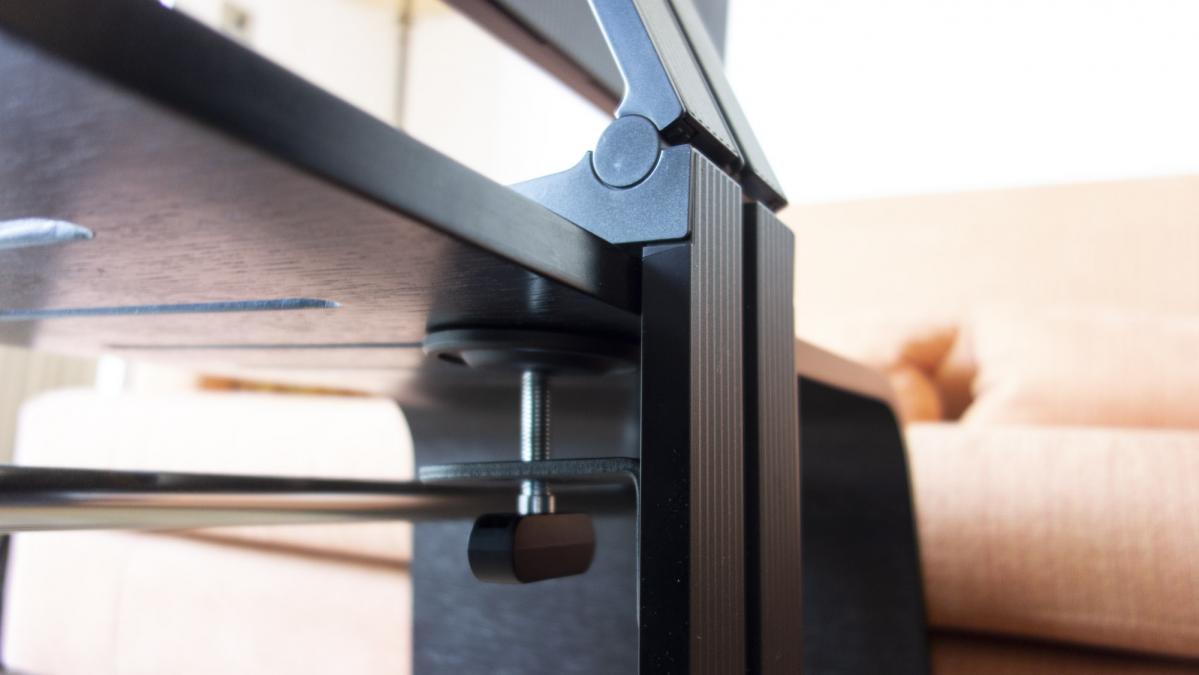 Also worth noting is that there are only two ports to choose from: mini-DisplayPort and HDMI 2. The lack of full-sized DisplayPort or multitude of HDMI ports might be a concern for those using multiple sources, but it does at least ensure cable mess is kept to a minimum. Indeed, Samsung is positively encouraging cable minimalism by including a combined HDMI and DC power cable in the box. 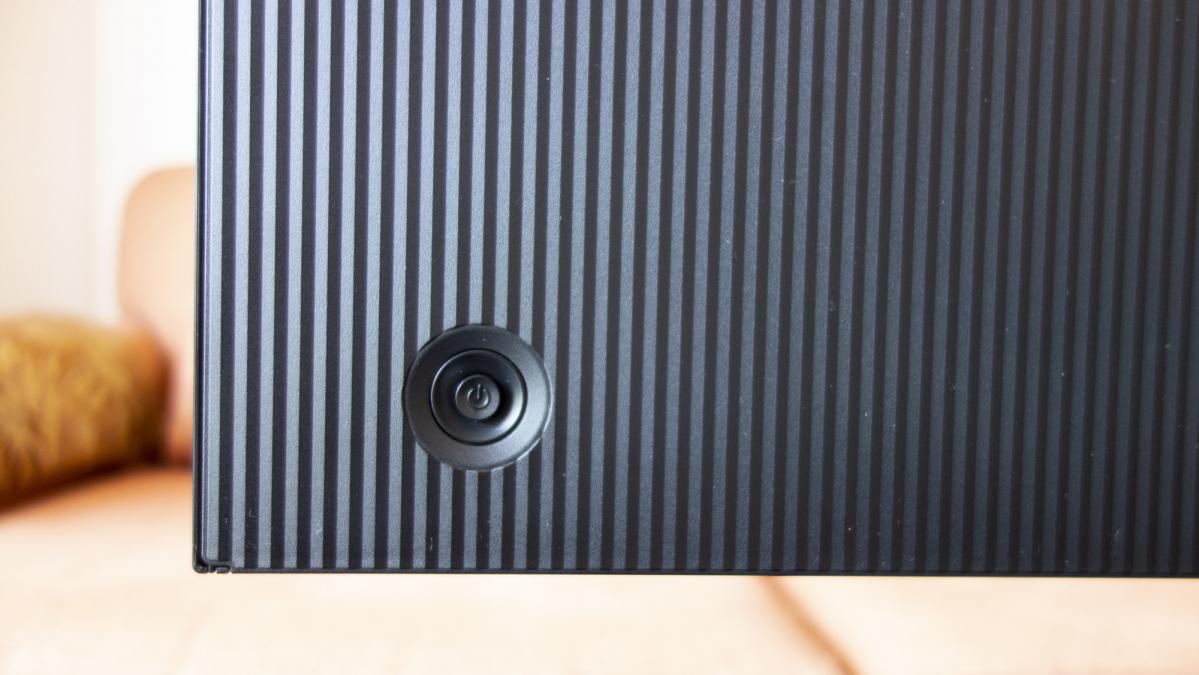 Assuming your desk works with it and you’re happy with the limited connectivity, it’s an easy design to live with. And it’s pretty simple to operate, too. Although there are no controls at the front, the clickable joystick at the rear means accessing and navigating the monitor’s onscreen display (OSD) is an absolute doddle.

Considering how much effort Samsung has put into the design of the Space Monitor, I’d expect the same attention to detail and care to have been taken over image quality. Unfortunately, Samsung doesn’t factory calibrate the Space Monitor and, as a result, colour accuracy takes a hit.

Out of the box, achieving an average Delta E of 2.55 and a peak of four in “Normal” mode (tested against sRGB) isn’t disastrous, but you can do better for the money. To my eyes, the Space Monitor also looks washed out, and it took fiddling with the gamma settings to sort it out. This tweak, however, makes colour accuracy even worse, dropping the average Delta E to 4.19 and the peak to 7.08 (again tested against sRGB). And while the monitor’s sRGB gamut coverage sits at 99.2%, the gamut volume misses the mark at 126.9%. 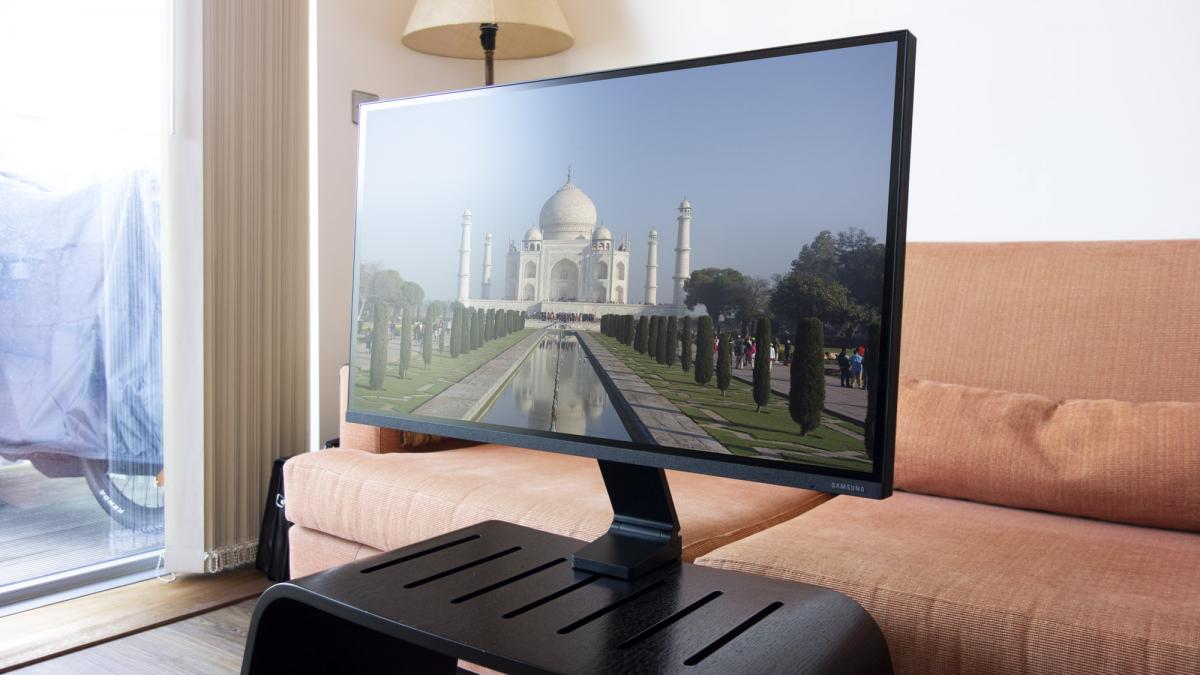 A peak brightness of 340cd/m² isn’t overly impressive, with rivals offering superior brightness and there’s no support for HDR, either. Brightness uniformity isn’t its forte, with a deviance of around 18% in each corner – pictures won’t appear as accurate near the edges as they would at the centre of the monitor. Plus, with the refresh rate capped at 60Hz, no low-input-lag mode or FreeSync/G-Sync options, the Space Monitor is also unsuitable for keen gamers. 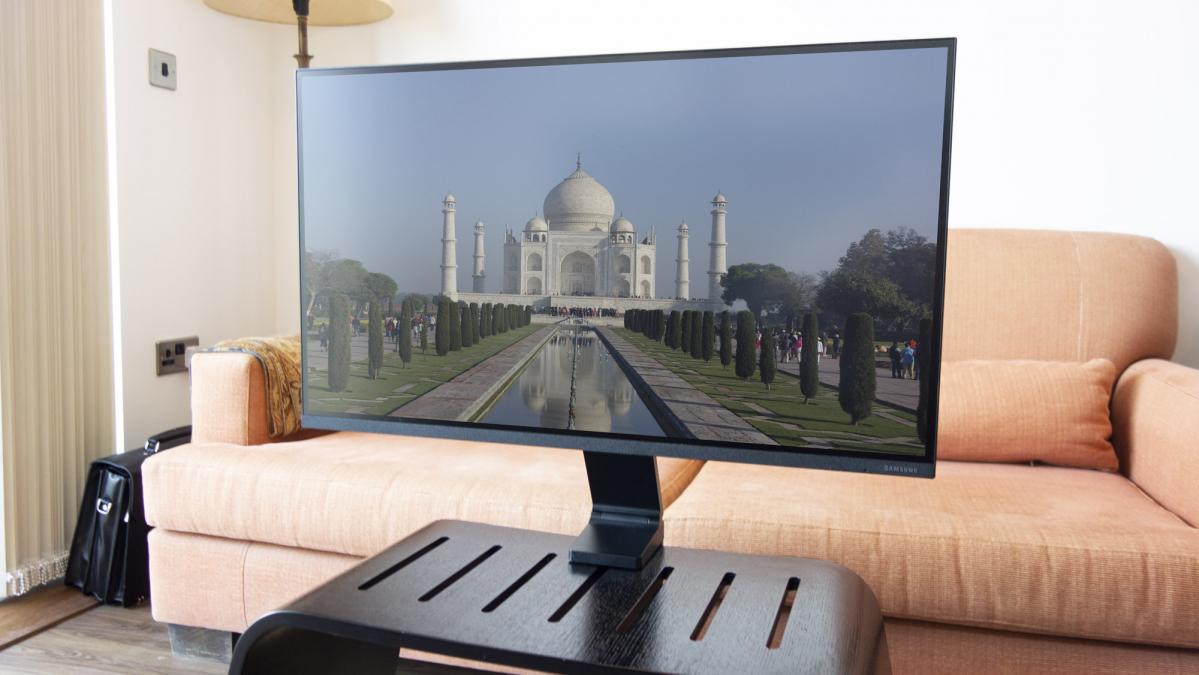 Samsung’s attempt to rekindle interest in space-saving monitors is commendable and it excels at that particular task. It’s quite simply the best-looking solution for those wanting to declutter their desks.

Other than its innovative design, however, I’m not convinced. The monitor’s image quality leaves much to be desired, which is a shame given the obvious designer-leanings of the monitor’s appearance. Anyone who needs decent colour accuracy should, therefore, look elsewhere – I’d recommend the BenQ PD2700U instead.

That’s not to say the Samsung Space Monitor is a bad product, just that it’s aimed at a limited group of individuals: not those seeking the best image quality, nor the fastest gaming panel, but those whose sole desire is elegant minimalism.

Don't miss a deal at EE Mobile
Best offers at Currys
Discounts, Sales and Deals at Bodybuilding
Save your money with H&R Block
Online-Shopping with TalkTalk Phone and Broadband
Best products at John Lewis
Latest Posts