Samsung’s soundbar division does it again: the HW-Q80R delivers a magnificently muscular performance

We’ve been big fans of Samsung’s recent premium soundbar offerings. They might be pricey but pretty much every model we’ve reviewed over the past three years has ended up winning an award. That’s an impressive record and with the HW-Q80R, Samsung continues that winning form.

Designed to fit in with Samsung’s line of premium QLED TVs – the 55in £1,700 Samsung Q80R, specifically – the HW-Q80R is undeniably expensive but justifies its price tag with impeccable audio and cinematic surround-sound.

Samsung HW-Q80R soundbar review: What you need to know

For £899, you might be surprised to discover that the Samsung HW-Q80R doesn’t come with rear speakers. In the box, all you get is the soundbar itself and a subwoofer.

Despite this, the soundbar does have 5.1.2-channel support, which comes courtesy of sideways-firing drivers fitted to each end of the bar. Additionally, you can upgrade the bar with a pair of SWA-9000S for £229 if you want the full surround effect.

Aside from the lack of rear speakers, the HW-Q80R is equipped with all the features you’d expect from a soundbar of this calibre. It supports both the main object surround sound standards – Dolby Atmos and DTS:X – you can stream music to it via Bluetooth or over your home network; and the HW-Q80R also works with Amazon’s Alexa digital voice assistant. Curiously though, there’s no support for Samsung’s own Bixby assistant or Google Assistant.

The Samsung HW-Q80R is a serious soundbar intended to be paired with high-end TVs. As such, it’s pretty pricey at £899. It’s not the most expensive soundbar in Samsung’s premium range, though; that honour belongs to the HW-Q90R, which is £1,499 and does come with rear speakers as standard.

There’s plenty of competition for your money at this price. For £799, you can grab the next model down in the Q-series, the HW-Q70R, which is only a 3.1.2-channel soundbar and a touch smaller. Other options include the Bose Soundbar 700, which costs £695, and the Q80R’s predecessor – the Samsung HW-N850 – which is currently at £745 at Amazon.

The HW-Q80R is quite a presence in front of your television. It’s chunky, largely constructed from metal and measures over a metre wide; it’s extremely heavy and will likely make your television look puny unless it’s at least a 55in set.

It may be a beast of a bar but, despite its rather brutish, boxy appearance it’s hard to deny the HW-Q80R is a fine-looking thing. Metal grilles wrap all around the bar with perforations just large enough to spy the drivers through the mesh, while a chamfered strip of dark, brushed trim stretches along the leading edge, softening the look a touch. 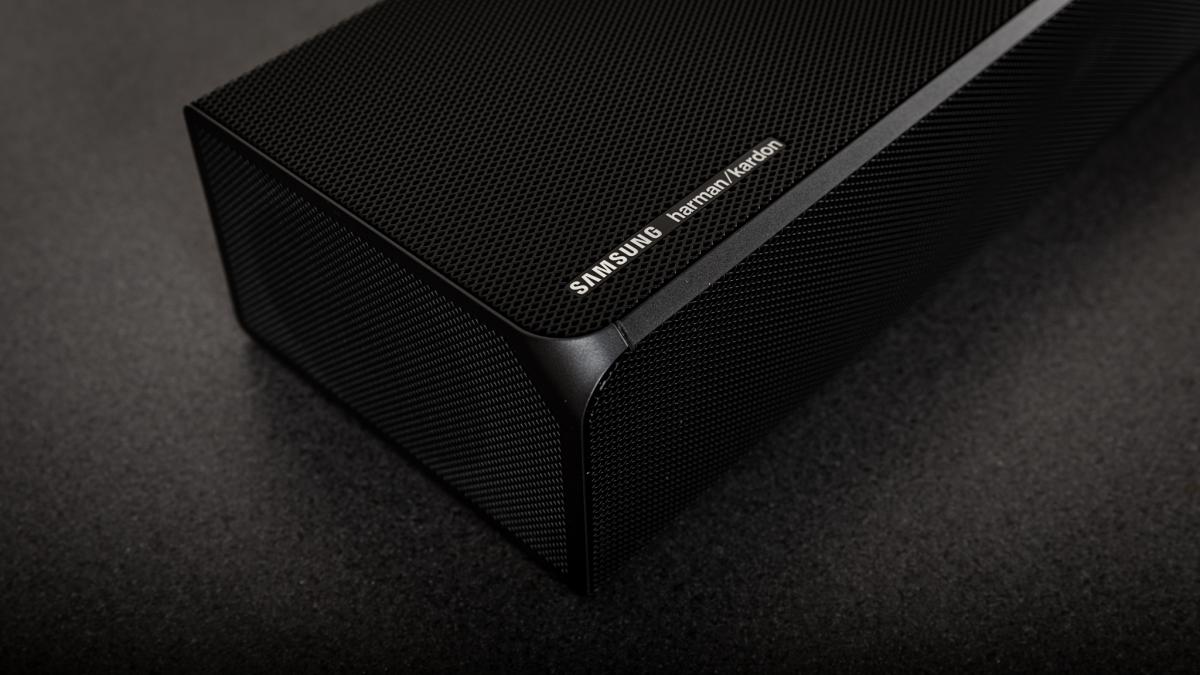 The only thing that doesn’t look great are the black plastic control buttons, which are located on the top of the bar in the middle; fortunately, they’re small enough that you can’t see them from a sitting position. The same goes for the subwoofer that comes with system. It’s a large, blocky and rather nondescript black box and not particularly attractive but its 20cm width means you should be able to hide it away down the side of the sofa relatively easily.

Thankfully, the slim remote control is much more elegantly designed. It’s pretty much exactly the same as the remotes Samsung has been supplying with its soundbars for some time now but that isn’t a bad thing. In fact, I rather like the way Samsung’s remote controls squeeze in all the necessary controls without overloading users with options.

As for connectivity, the HW-Q80R is pretty standard. You get a pair of HDMI inputs and an eARC-enabled HDMI output, plus an optical TOSlink digital audio input for those who prefer simplicity. The HDMI connections cope perfectly well with all the formats you’d expect of a modern, premium soundbar, including Dolby Vision and HDR10+. 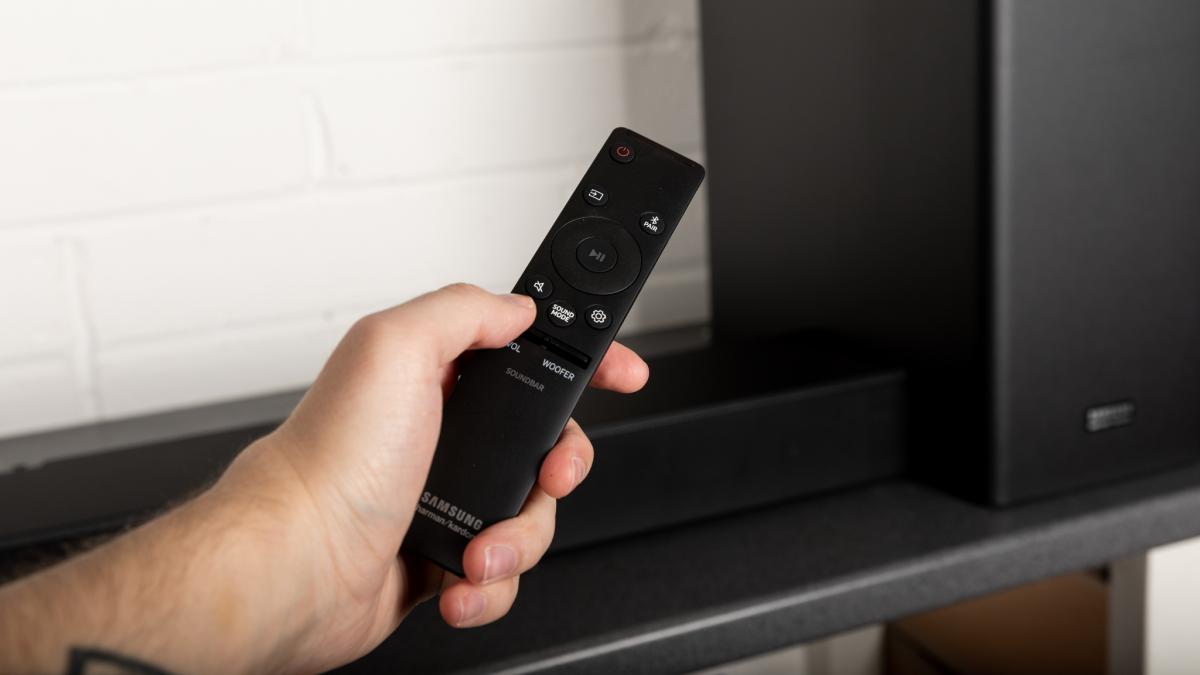 Aside from the wired connections, the HW-Q80R offers connectivity via both Bluetooth and Wi-Fi. There’s a pairing button on the remote for the former, which makes it easy to pair your phone and stream music. There’s also Alexa support, although it’s worth noting that this is not a smart speaker like the Polk Command Bar. Voice control requires you to have an Echo device paired with the soundbar via the Samsung Wireless Audio skill on the Amazon Alexa app.

There’s one other thing to consider when setting up the HW-Q80R: make sure to give it enough space on both sides. While many soundbars rely on rear satellite speakers to generate a wide sound, the HW-Q80R instead plumps for sideways facing drivers on the soundbar itself.

As with most recent Samsung AV speakers, the HW-Q80R is well-endowed with drivers, with a total of 13 lurking beneath the soundbar’s purposeful grilles. Nine of these are strung across the front of the soundbar – shared between the left, right and centre channels. There are two drivers for the left and right rear channels – one on each end of the bar. Finally, there are two upward-firing drivers for the overhead left and right height channels.

Coupled with a total 372W of amplification, this is one seriously powerful piece of audio equipment, capable of filling your living room with an immensely potent wall of sound. The HW-Q80R isn’t all brute force though and is capable of a surprisingly deft touch.

Fire up an Atmos-enabled Blu-ray and you can hear exactly where all the action is taking place, whether that’s dialogue in the centre, sound effects to the left or right or above you, and those sideways facing drivers really do add extra width to the sound.

As a general rule, a system with rear speakers will always deliver a superior sense of envelopment but the HW-Q80R is so good at filling a room with sound that you’ll probably not care too much.

The HW-Q80R is not only great for movie soundtracks but it’s also pretty darned musical. It all starts with the subwoofer, which despite its hulking size and enormous 8in driver, is surprisingly subtle in its delivery of the lower end of the audio spectrum. There’s real control here as well as good balance and it blends in beautifully with the soundbar itself, too. 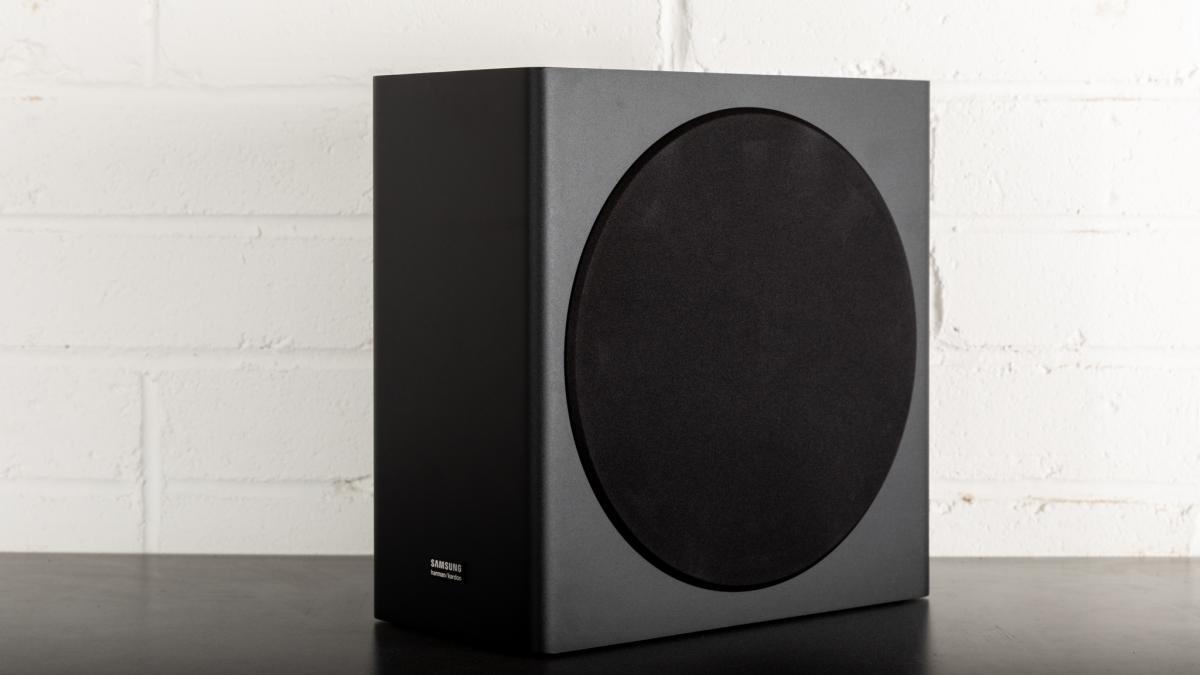 One intriguing feature you might want to investigate is the new Adaptive Sound feature. This analyses the audio being played through the soundbar and adjusts the balance of channels and the EQ based on what it finds. This might sound a touch gimmicky but I found it worked surprisingly well, producing clearer dialogue during talking scenes, for instance. It’s especially handy if you come across a mix where the dialogue isn’t especially prominent and you’re having trouble hearing the characters speak to each other, or if your preference is to have the subwoofer levels cranked right up. It really is very clever.

For £899, the Samsung HW-Q80R is pricey, especially considering it doesn’t come with rear speakers as standard. Despite that, the sheer quality of the sound it produces – its solidity, scale and detail – means it justifies that price effortlessly.

Its principal shortcoming is that, for all its positive attributes, the lack of rear speakers means it can’t deliver the full surround-sound effect with sound effects coming from behind you as well as just from in front.

However, if you do have £899 to spend on a soundbar, the Samsung HW-Q80R will definitely not disappoint – and you can always add rear speakers to achieve the full surround-sound effect later on.

Don't miss a deal at O2 Mobile
Best offers at Farfetch
Discounts, Sales and Deals at Sephora
Save your money with Boohoo
Online-Shopping with EBay DE
Best products at Brian Tracy
Latest Posts