While the clever new design proves a hit, the Galaxy Buds Live are severely let down by ineffective ANC

Following hot on the heels of the Galaxy Buds Plus, which were released in February this year, the Samsung Galaxy Buds Live represent a dramatic design departure for the South Korean company. Instead of sealing off your ear canals, the bean-shaped buds rest in your conchas – the small hollows just outside the ear canals. It’s a design decision that works on some levels but renders the Buds Live’s other big new feature – active noise cancellation – virtually useless.

That major flaw aside, the Buds Live are a capable and comfortable pair of earbuds. But unless you’re desperate to keep your ear canals clear, there are plenty of better noise-cancelling in-ear options to choose from.

The most obvious change from Samsung’s previous true wireless earbud offerings is the design. The once-round earbud housings now resemble a pair of cute plastic kidney beans and there’s not an eartip or silicone seal in sight. Rather than filling your ear canals, the speaker sections of the buds nestle neatly just outside their entrance, while small rubber wingtips on the upper half of the buds help secure them in your ear. 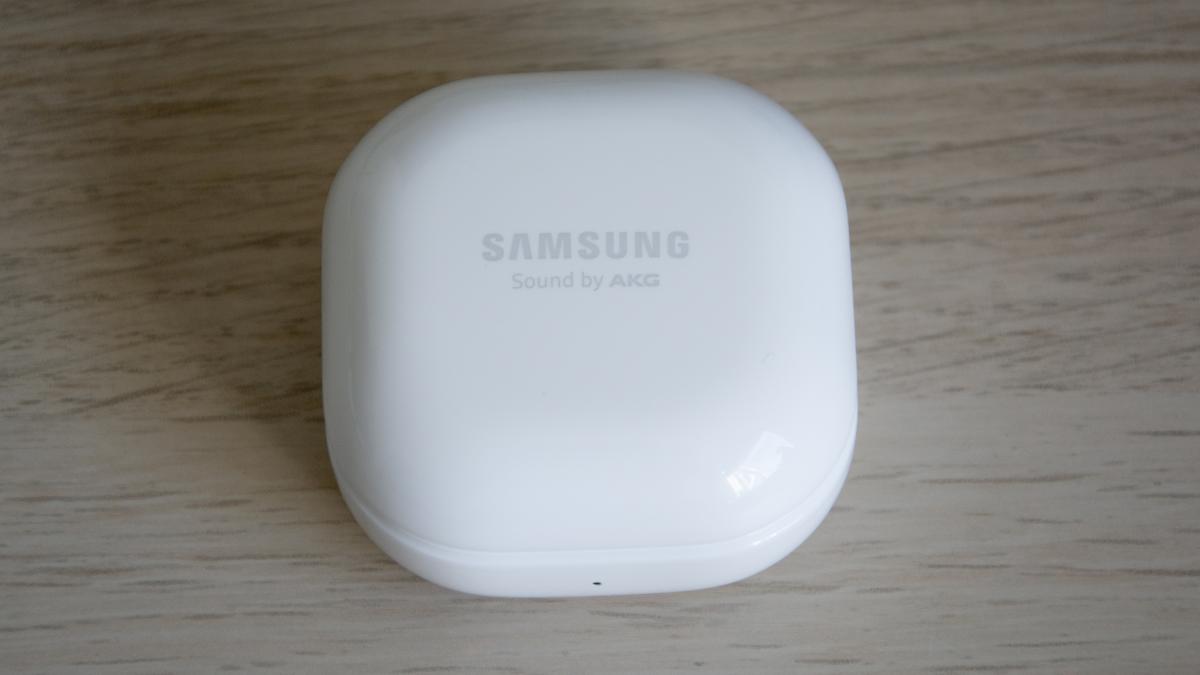 The other big addition comes in the form of active noise cancellation. ANC is the current must-have feature when it comes to wireless earbuds so it’s no surprise Samsung has decided to get in on the action. It’s a simple on or off affair, with no way to adjust the noise-cancelling level or customise the experience, unlike more advanced buds such as the Apple AirPods Pro or Sony WF-1000XM3.

Also new is the ability to hail Samsung’s smart assistant, Bixby, using your voice. With the Buds Plus, Bixby had to be activated via touch controls but it’s now available by uttering your chosen wake word. Bixby may not be the most widely used voice assistant but for those with devices that are already using it, it’s a welcome inclusion.

Samsung subsidiary AKG again provides the audio expertise for the Buds Live, but the earbuds now feature 12mm single driver units rather than the dual-driver setup inside the Buds Plus. The large drivers are supported by bass ducts that successfully enhance low-frequency sounds. 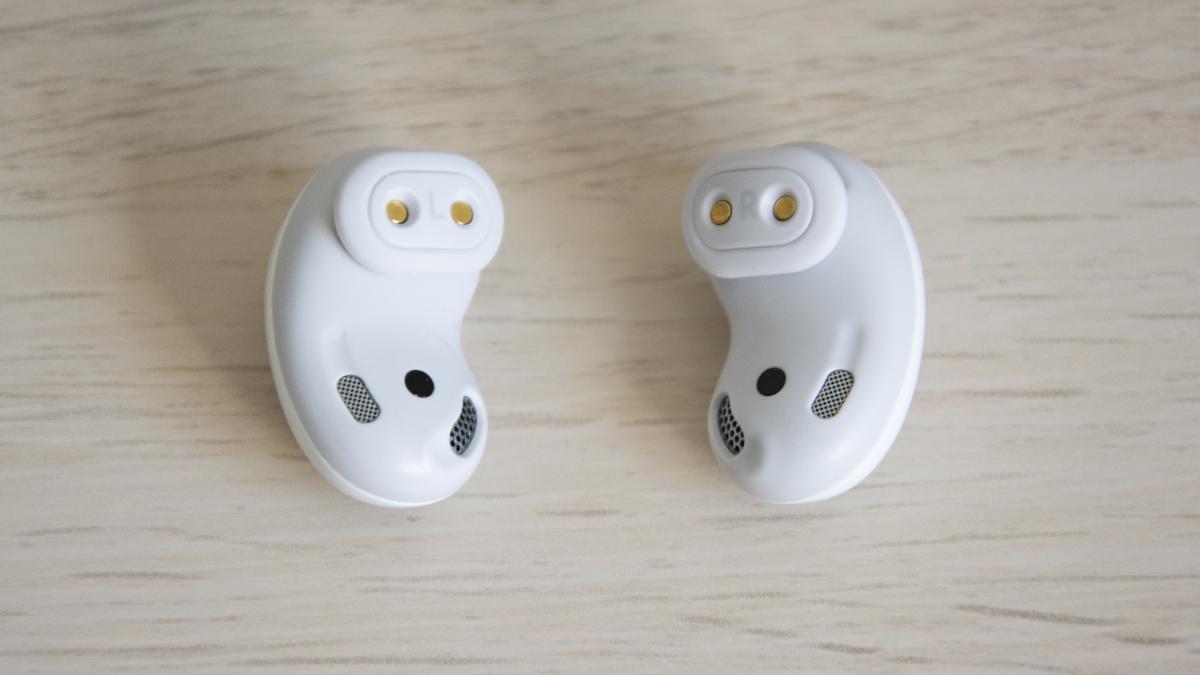 Battery life on the buds clocks in at six hours per charge with ANC turned on, with the charging case offering a further 15 hours of use. Turn both it and Bixby wake-up off, however, and you can expect up to 29 hours of playback in total, which is very respectable and significantly more than the 22 hours offered by the Galaxy Buds Plus.

The charging case itself has also had a makeover. It’s squarer than the Buds Plus case but retains the rounded edges and wireless charging capabilities. It’s the perfect size to pop in your pocket and the Mystic White version doesn’t pick up fingerprints, which is always a bonus, although we can’t comment on how the Mystic Bronze or black fare when pawed by grubby mitts.

Samsung Galaxy Buds Live: What do they do well?

I must admit I had reservations about the new design, fearing that the absence of eartips would lead to fit and comfort issues. However, I’m pleased to say the Buds Live are very comfortable to wear. Not having silicone tips wedged in your lugholes is extremely freeing, not to mention more hygienic, and the buds don’t shake loose while you’re exercising or running, either. I was able to wear the Buds Live for hours on end without experiencing any ear fatigue whatsoever: it’s not often I can say that about a pair of earbuds.

The shape and fit also make the Buds Live some of the most discreet buds on the market. They don’t protrude out of your ears and the absence of dangling stems gives the buds an unobtrusive, stylish aesthetic. 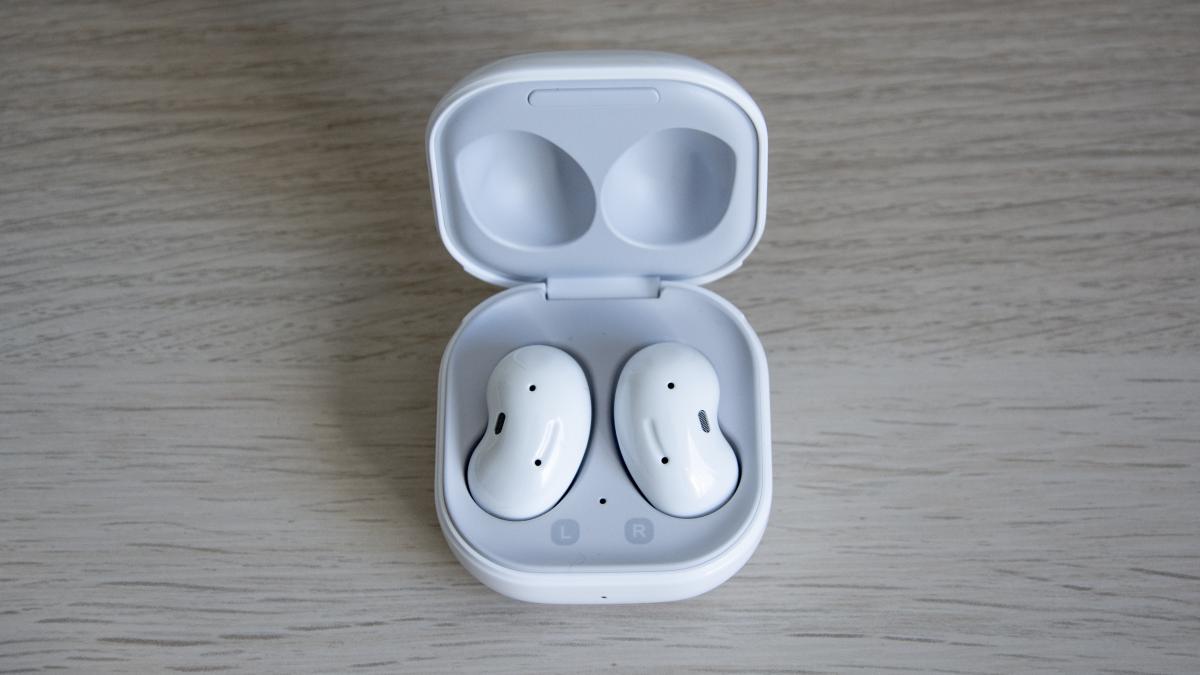 Audio quality is better than many open earphones but is some way off the best silicone tip buds, including the RHA True Connect 2 and Sennheiser Momentum True Wireless 2. That’s to be expected though, and on the whole, the Buds Live are a reasonable listen. Despite the lack of passive noise cancellation, there’s no shortage of bass, and low-end frequencies are reproduced with impressive richness. There’s a decent amount of detail throughout the audio spectrum when listening to simpler arrangements, too, although I did find the Buds Live struggled to keep up with more frenetic, complicated tracks.

Galaxy Wearable (Android) and Galaxy Buds (iOS) remain solid companion apps, giving you access to six EQ presets, information on the charge level of both the buds and case, the ability to remap certain touch controls and Spotify integration (Android only). While pretty basic, the apps are clearly laid-out and easy to use.

Samsung Galaxy Buds Live: What don’t they do well?

Although I appreciate Samsung is trying to do something a bit different by incorporating noise cancellation in a pair of buds that don’t seal off your ear canals, it just isn’t effective. The marketing material states that the ANC “keeps the noise out, but lets the world in”; that’s a catchy line but, ultimately there’s next to no reduction in how much external sound makes it into your ears. Without checking in the app I regularly found myself unsure of whether the feature was even switched on.

A more minor gripe I have is that there’s no way to have ANC and volume up/down mapped to touch controls at the same time. Both are tied to long-pressing the earbuds and, as such, you’re forced to choose between them. Given how ineffective the ANC is, I simply chose to disable it after a while and had my controls mapped to allow for volume control (gaining a substantial boost in battery life in the process).

Samsung Galaxy Buds Live: Should you buy them?

Those seeking a pair of earbuds they can wear all day while keeping their ear canals clear to hear what’s going on around them may get some mileage out of the Buds Live. The bean-shaped design makes for a very comfortable fit and audio is above-average for open earbuds.

However, if you’re after decent noise cancellation, look elsewhere. Calling the Galaxy Buds Live’s ANC light touch would be doing them a favour – it’s practically non-existent. You’d be far better served by any of the in-ear entries on our Best noise-cancelling headphones list.