The Galaxy A80 is the best of Samsung’s new mid-range releases, featuring an “all-screen”, no-notch display and rotating camera

The Galaxy S10 and S10 Plus may be Samsung’s headline-grabbers, but they’re hardly accessible to the average consumer. And that’s where the new Galaxy A Series phones come in. I’ve just been to the ”A Galaxy Event” in Milan and got early access to Samsung’s latest string of mid-range handsets, including the fascinating Galaxy A80, which has a rotating triple camera.

Instead of a notch or an in-display camera, the rear camera slides up and the entire camera unit turns 180 degrees to face the user. It’s a bold design decision that has the potential to spark a camera-flipping revolution. Having tested the rotating camera for myself, I have my concerns – what happens if something gets stuck or the mechanism breaks? – but can’t deny that it’s a refreshing take on the notch problem.

Read on for the full lowdown on the Samsung Galaxy A80’s specifications and find out when it’s coming to the UK.

For lack of a better term, the Galaxy A80 is Samsung’s flagship mid-range handset for 2019. It’s got the same 6.7in, Full HD Super AMOLED display as the Galaxy A70 (which was announced at the same time) but has a slight edge in terms of internal components. Of course, it also has a rotating triple camera, while the Galaxy A70 is still stuck in the teardrop notch age. The A80 is a tad thicker, though – at 9.7mm to the A70’s 7.9mm – due to the sliding camera panel. 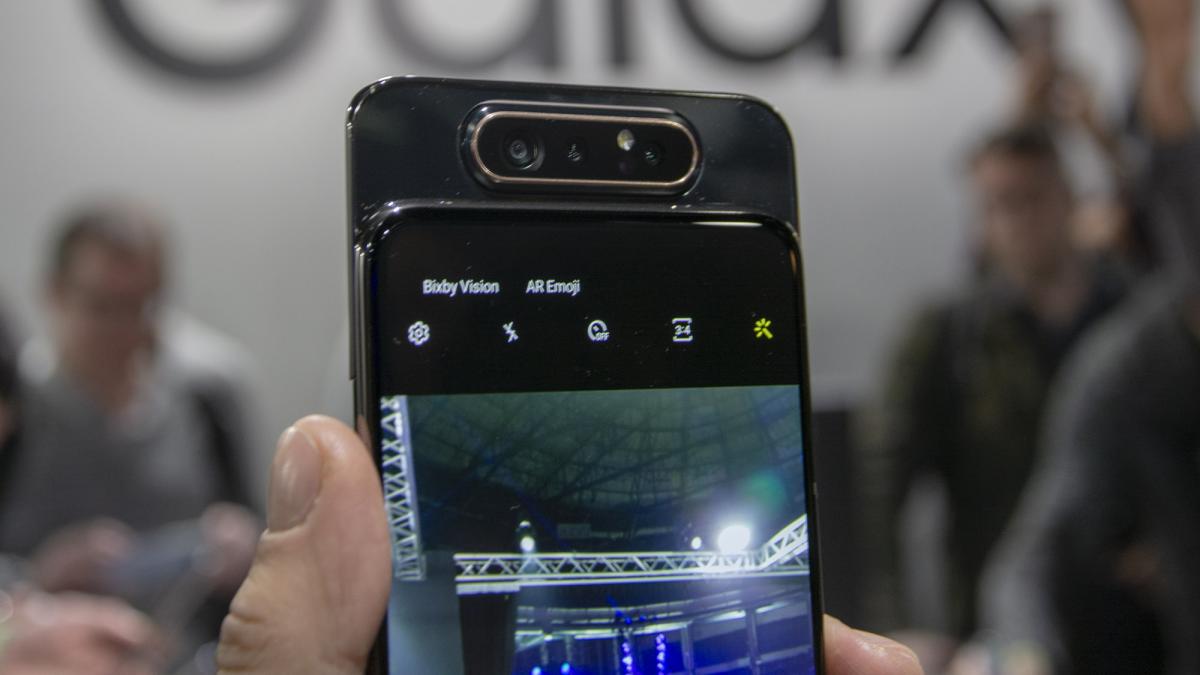 Thanks to that rotating camera, the Galaxy A80 has a truly unique appearance: the 6.7in display is completely free of notches, cameras or microphones. The mic is embedded below the screen and the onscreen fingerprint reader is fused to the glass. The power button is mounted on the right-hand side and volume controls on the left edge, while down below are the speakers and USB Type-C charging port.

Both the A80 and A70 boast stunning flagship looks despite their relatively low prices, with lovely aluminium frames encased in what Samsung calls “3D glass”. There are three shiny finishes: Phantom Black, Angel Gold and Ghost White. It feels great in the hand and isn’t even that slippery compared to other glass-backed flagships, although I noticed that the black model attracts greasy fingerprints like a loaf of bread attracts pigeons. 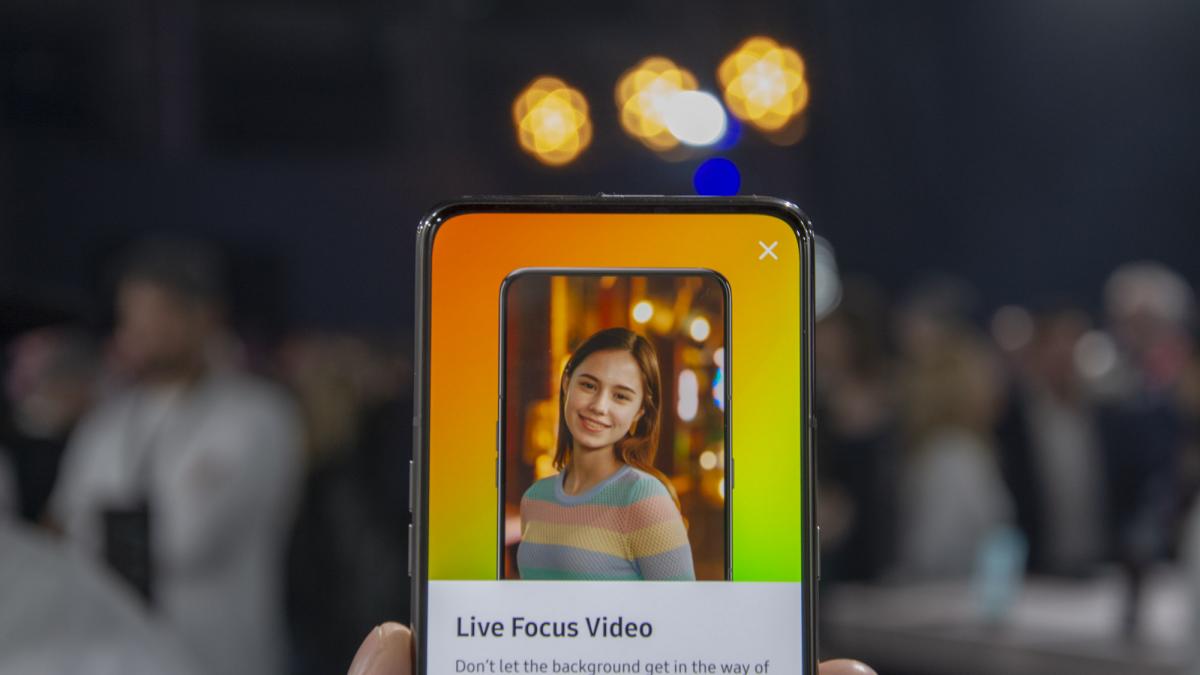 Onto the internals: Samsung hasn’t confirmed the exact name of the chipset, but we do know that the Galaxy A80 runs on an octa-core CPU comprised of a dual-core 2.2GHz and hexa-core 1.8GHz chip. Supporting that is a whopping 8GB of RAM, so there’s no doubt that this will be a speedy phone that will cater to all your mobile gaming needs. There’s 128GB of storage available but, unlike with the A70, Samsung has not stated whether or not that will be expandable via microSD.

The rotating triple camera is obviously the big new feature and you’re no doubt itching to hear all about it. The camera setup comprises of a 3D Depth module (specs unknown), an ultra-wide 8-megapixel f2.2 (128-degree) module and the primary 48-megapixel f.20 snapper. For a mid-range phone, this is a formidable arrangement and it’s even more impressive when you consider that it’s also the selfie camera! When you hit the lens flip button in the camera app, the entire camera panel slides upwards and the whole unit rotates on its X-axis, ready for wide-angle, high-quality self-portrait action.

Does it look cool? Yes. Are there problems? Most definitely. It’s easy to envisage the camera getting broken, or stuck if something manages to lodge itself inside the gap while the unit is in the process of turning. It also hates being pressed while the phone is on a flat surface – it sorts of just vibrates as it tries and fails to flip back around. To be honest, it feels quite fragile, but only time will tell whether or not the mechanism holds up after several thousand rotations or so.

The Samsung Galaxy A80 is definitely one of the most eye-catching and unusual mid-range smartphones to emerge in recent times and, looking beyond its flashy flipping camera, it has the makings of a serious flagship rival. That gorgeous all-screen AMOLED display makes the A80’s notched competitors seem ugly and outdated, while the internal components and 3,7500mAh battery should make it an excellent all-round performer. 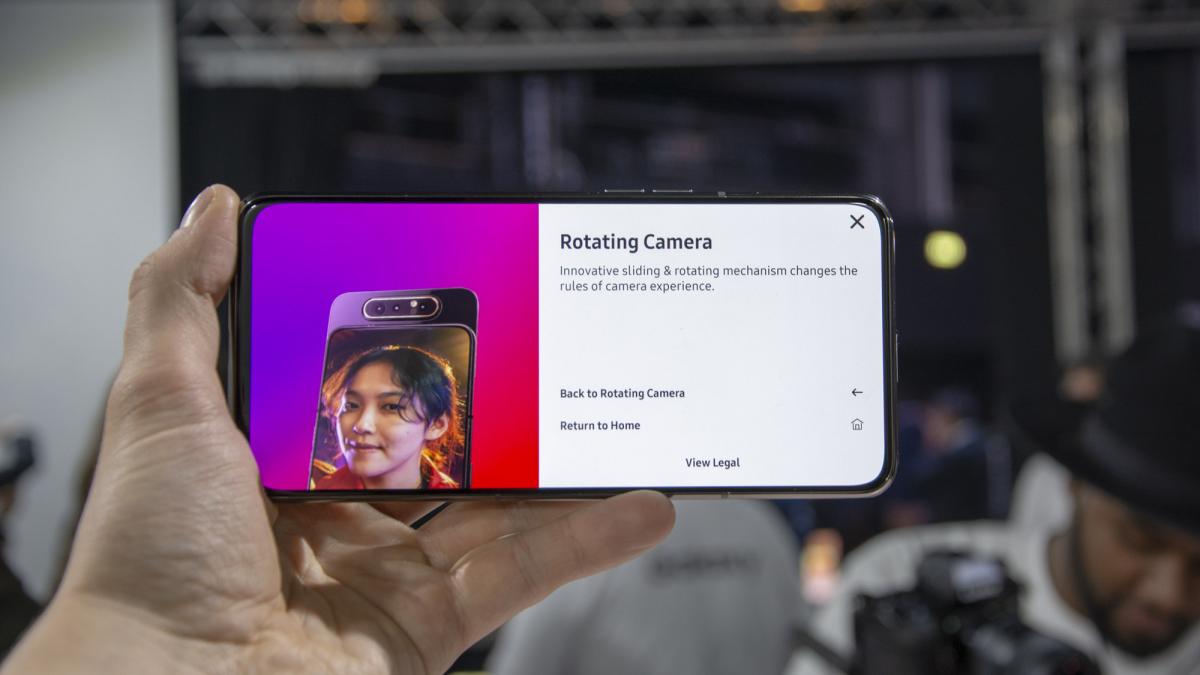 Pricing has not been confirmed for the Galaxy A80 yet, nor for any of the new Samsung Galaxy A Series phones, but you can expect it to fall somewhere around the £400 to £500 bracket once it lands in the UK on 29 May 2019.

Don't miss a deal at Ancestry
Best offers at Groupon
Discounts, Sales and Deals at Argos
Save your money with Nike DE
Online-Shopping with Udemy
Best products at The Home Depot
Latest Posts