Ring’s acquisition of Mr. Beams in 2018 enabled it to significantly expand its smart lighting offerings, with mostly positive results. The Ring Floodlight Wired is essentially the same device as the Ring Floodlight Cam, but it costs significantly less because it doesn’t include a camera. If you’re already in the Ring ecosystem—with that or another of the company’s products—and you need more outdoor lighting, this wired floodlight is a no-brainer.

But you don’t need to be firmly ensconced in the Ring ecosystem to benefit from the Floodlight Wired. Ring’s floodlight isn’t pretty, consisting of two independently articulated stalks with LEDs and a bulbous motion sensor dangling beneath them. But its LEDs produce 2,000 lumens of brightness between them, a significant boost over the Ring Floodlight Battery we looked at in June; that device puts out a paltry 600 lumens.

If you’re looking for stylish outdoor smart lighting, you might want to look at something in the Philips Hue product line (the Lucca Outdoor wall light, for example). The Philips Hue line also includes a variety of smart landscape lighting devices, where Ring has only the Pathlight (also reviewed in June) and the Steplight (our review is forthcoming).

As its name indicates, you’ll need to hardwire this fixture to your electrical system, so most people will replace an existing outdoor light (I replaced one of the carriage lights outside my garage, after having replaced one on the opposite side with a Ring Floodlight Cam several months back). As usual, Ring provides all the tools and accessories you’ll need to accomplish the task (just be sure to cut the power at your breaker box). 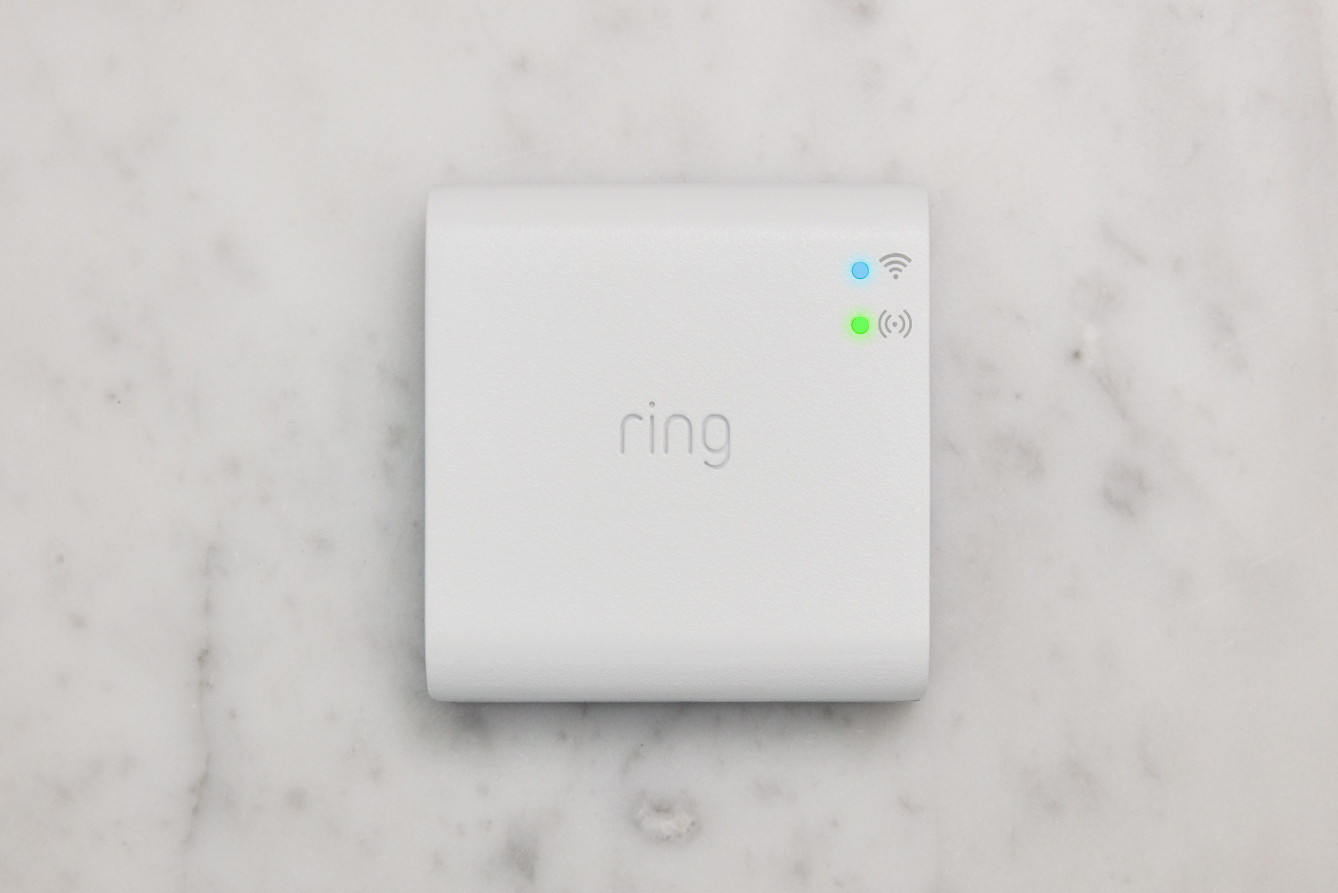 If this is the first Ring smart lighting product you’ll be installing, you’ll also need the Ring Bridge (it’s worth noting that the Bridge can operate only on 2.4GHz networks, which can become overcrowded). Note that the Ring Floodlight Cam is not part of the company’s smart lighting product line—not because it’s a dumb light (or camera), but because it connects directly to your Wi-Fi network. Everything in the former Mr. Beams product line operates on a separate low-frequency radio network that then connects to your Wi-Fi router via the Bridge. (Philips Hue products operate on the same basis, and I can attest that the two ecosystems can coexist in the same home without any problems.) 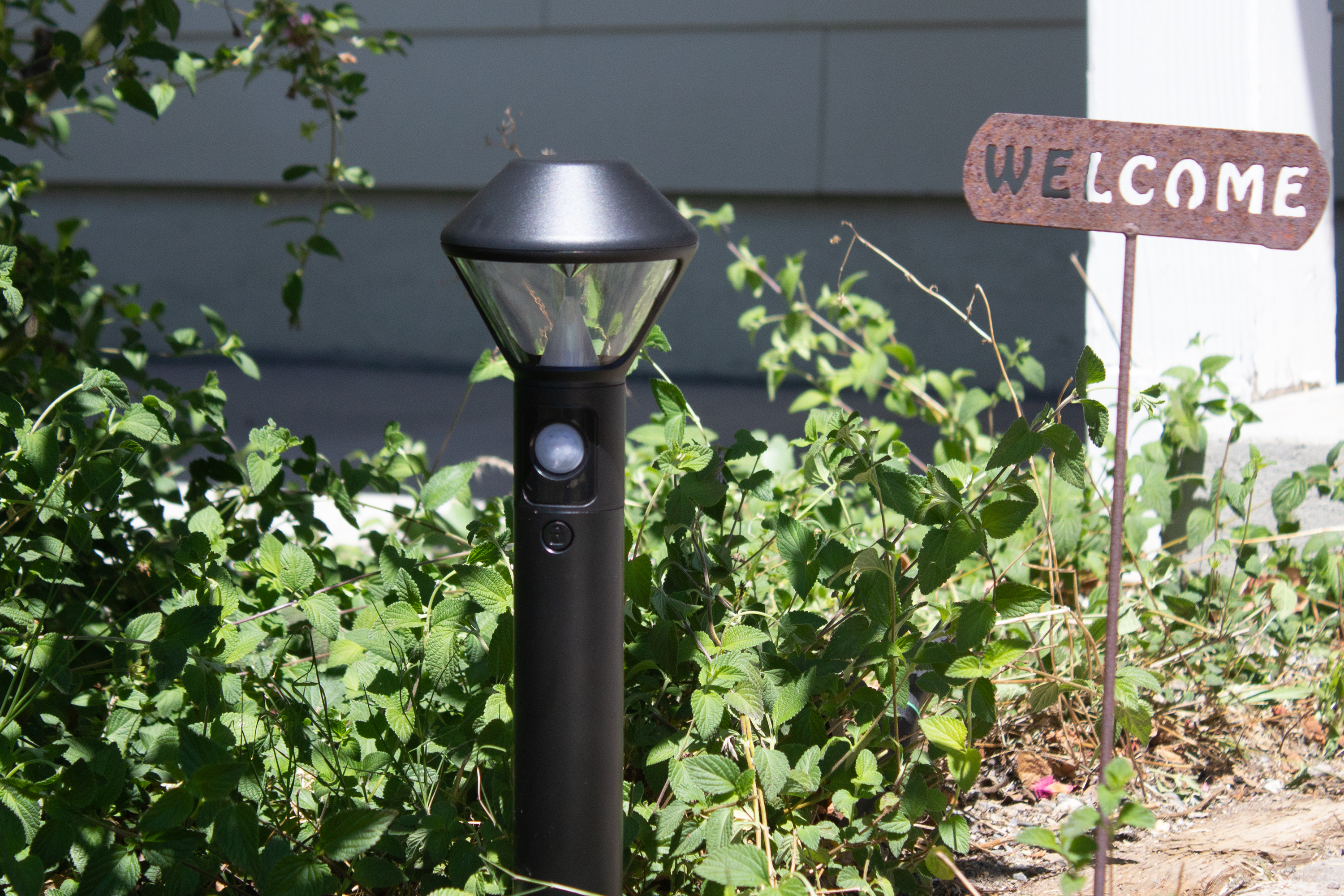 A distinction without too much of a difference 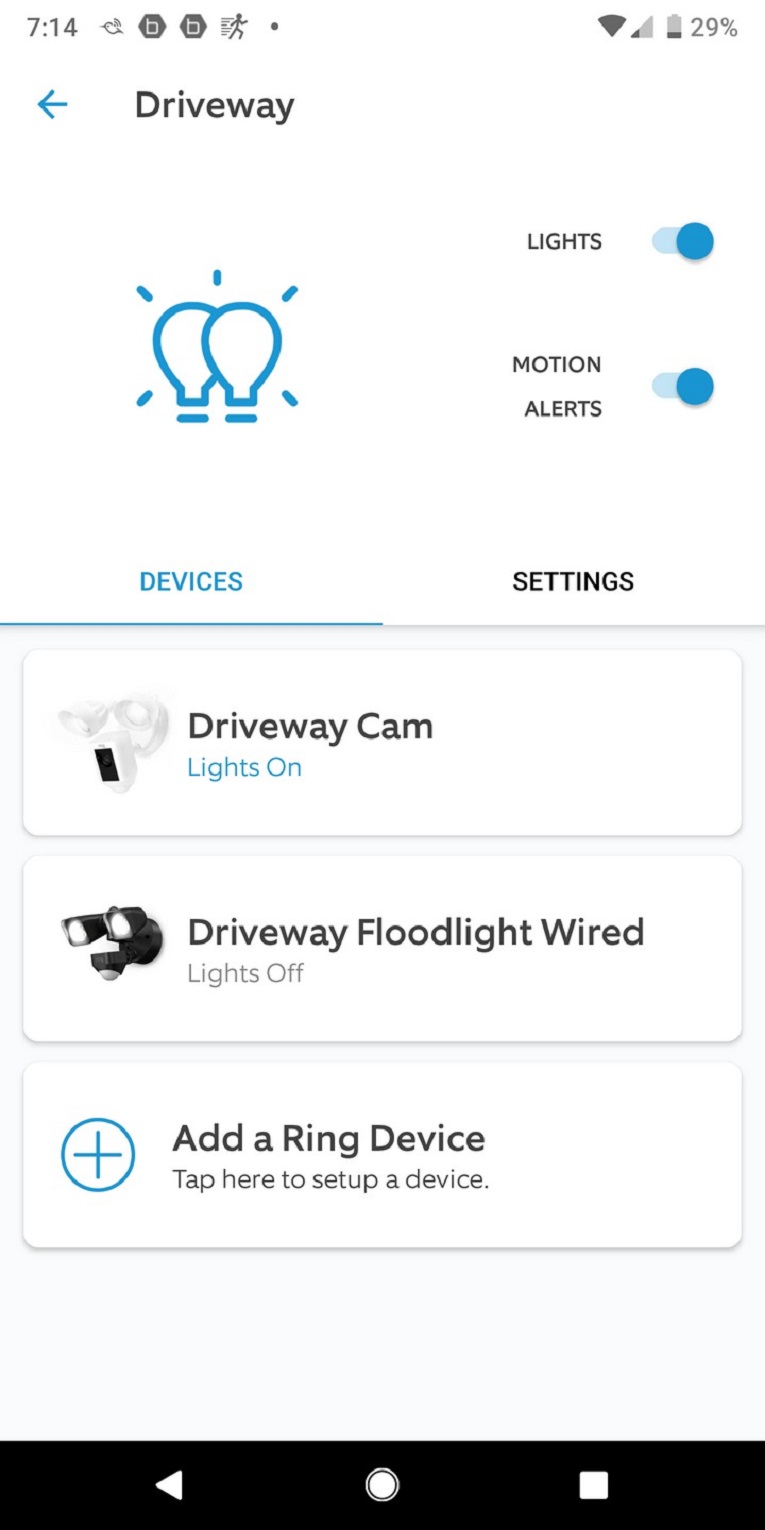 The different means of communication are an important distinction to be aware of, but it’s one that Ring tries very hard to render irrelevant. Whether you’re using its Ring Alarm, Ring Video Doorbell, or any of its other cameras or lighting products, all things Ring can be controlled and programmed with the Ring app. You can also group Ring devices (security cameras, doorbells, etc.) and Ring Smart Lighting products (the aforementioned Ring Floodlight Battery, Pathlight, or Steplight, for example) even though they ultimately connect to your network in different ways. This is mostly useful for controlling and programming the settings of all the devices you’ve deployed in a general area at the same time.

In my case, I bundled the Ring Floodlight Wired and the Ring Floodlight Cam outside my garage in a group I labeled Driveway, and I bundled the Ring Pathlight and Ring Steplight near my front door into a group I called Front Door. This allows me to turn all the lights on in each group with one button press. I can also program the settings for all the devices in each group in one step, instead of individually (although I can program each device with different settings, too). I did encounter a bug, however, that prevented me from adding the Floodlight Cam to the Driveway group that the Floodlight Wired is in, but Ring squashed the bug a few days after I queried them about it.

Once you’ve added a Ring device to the Ring app, you can also link Ring devices together, so that motion detected by one will trigger action on others (regardless of which group they’re in). For example, I have the Floodlight Wired set to trigger the Floodlight Cam to turn its lights on and to record a video clip. The Floodlight Cam, meanwhile, is programmed so that its motion sensor will trigger the Floodlight Wired on the other side of the garage to light up. Since the two devices are mounted on opposite sides (widthwise) of my three-car garage, this not only lights up my entire driveway, it also enables the camera to begin capturing video much earlier than it would if it relied only on its own motion sensor. 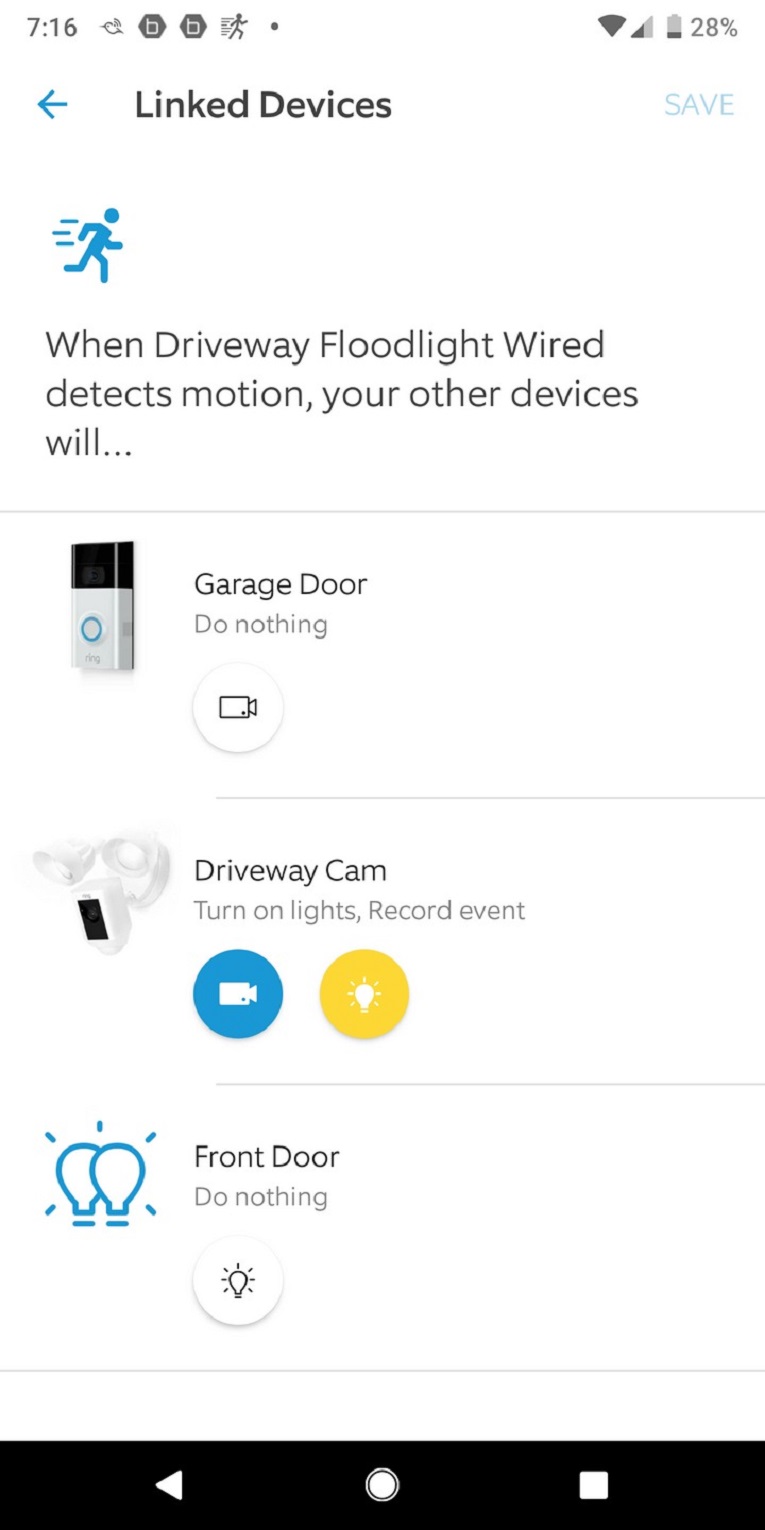 I could have done the same for my Ring Doorbell Cam 2, having it record video when either of the lights mounted in front of the garage detect motion, but I found that doing so drained the doorbell camera’s battery too quickly. By the same token, I could have linked the motion sensors on any of these three devices to turn on the lights in the Front Door group. Here again, however, I elected not to do that to preserve the batteries in those devices, which don’t have hardwired power options.

Ring was not entirely successful at erasing the differences between its Ring Smart Lighting devices and the rest of its Ring product line, and that can be confusing when you have a mix of both product families and you want to tweak settings. The Wired Floodlight’s lighting settings, for example, give you the option of having the lights turn on automatically at dusk and off at dawn. That’s the absolute best way of automating lighting, because you don’t need to worry about daylight saving time.

The Floodlight Cam’s light settings, on the other hand, are based solely on clock time: You can program them to turn at 7:00 p.m. and off at 6:00 a.m., for example. But the different settings mean there’s no way to ensure that both lights turn on and off on the same schedule.

Both scenarios described above defeat the motion sensor in each device (the motion sensor in the Floodlight Cam will continue to trigger video recording), but I much prefer that to the default setting that turns the light off 30 seconds, one minute, three minutes, or five minutes (your choice) after motion is detected. Few things are more annoying than being plunged into darkness while performing a task outside at night.

Is the Ring Floodlight Wired a good product?

The Momentum Aria Wi-Fi floodlight/camera combo I reviewed in February 2019 costs just $10 more than the camera-less Ring Floodlight Wired starter kit (it’s $30 more than the Ring product without the bridge), but that doesn’t mean Momentum’s product is a good value. Momentum doesn’t offer much of an ecosystem, and I was very disappointed with the Aria’s performance. Shop around and you’ll find more than a few other low-cost products promising similar features to what Ring has to offer.

The Floodlight Wired isn’t pretty (neither is the Aria, for that matter), but it is a good value. I suppose it should go without saying that all of the Ring Smart Lighting products can be turned on and off with Alexa voice commands, but I was surprised that Alexa couldn’t answer the question “Is the Driveway Floodlight Wired turned on?” Her response: “Driveway Floodlight Wired motion detection is off.” That’s not what I wanted to know. I asked if the light was turned on, but I couldn’t coax that information out of Alexa no matter how I phrased the question. Integration with Google Assistant, meanwhile, is essentially nonexistent (at least as far as I could tell).

But my biggest complaint about Ring, Ring Alarm, and Ring Smart Lighting is that you can’t program Ring Smart Lights to turn on when the Ring Alarm system goes into an Alarm state. Ring’s door sensors won’t even turn any Ring lighting products on at night—you must wait for the light’s motion sensor to turn on a light. Ring should do something about that.

That said, the Floodlight Wired will make a fabulous addition to your outdoor lighting whether you’re already in the Ring ecosystem or not. Even though I rely primarily on Vivint Smart Home for the hub of my smart home and home security needs, with its video doorbell and several of its security cameras deployed around my property, I supplement that system with Ring’s video doorbell, its cameras, and its outdoor smart lighting devices. To answer my own question: Yes, the Ring Floodlight Wired is a very good product.

The Ring Floodlight Wired isn’t the perfect outdoor smart lighting device—you can’t dim its 2,000-lumen output when you’re entertaining on the deck, for instance—but it has plenty of positive attributes to recommend it.