Many smartphones come with earbuds that let you privately listen to music stored or streamed on the device. Many consumers regard those stock earbuds with disdain, however, claiming their sound quality is simply not good. For them, buying a set of third-party earbuds—or, even better, a set of in-ear monitors (IEMs)—is an easy way to improve the quality of the sound they hear.

Swedish company RevoNext is one of many makers of IEMs. Within its lineup is the QT5, which offers several high-end features for a decidedly bargain price. Even better, the sound quality far exceeds what you’d expect for so little moolah.

For those who aren’t completely familiar with the terms, let’s start with the difference between earbuds and in-ear monitors (IEMs, also called in-ear headphones). Both include tiny speaker-like transducers that convert electrical audio signals into sound. Earbuds sit in the “bowl” (concha) of the outer ear at the entrance to the ear canal, while IEMs extend into the canal. Also, IEMs strive to seal the canal opening, while earbuds do not. This lets earbud users hear more of the outside world, but sealing the ear canal greatly improves the sound quality of IEMs, especially at low frequencies. 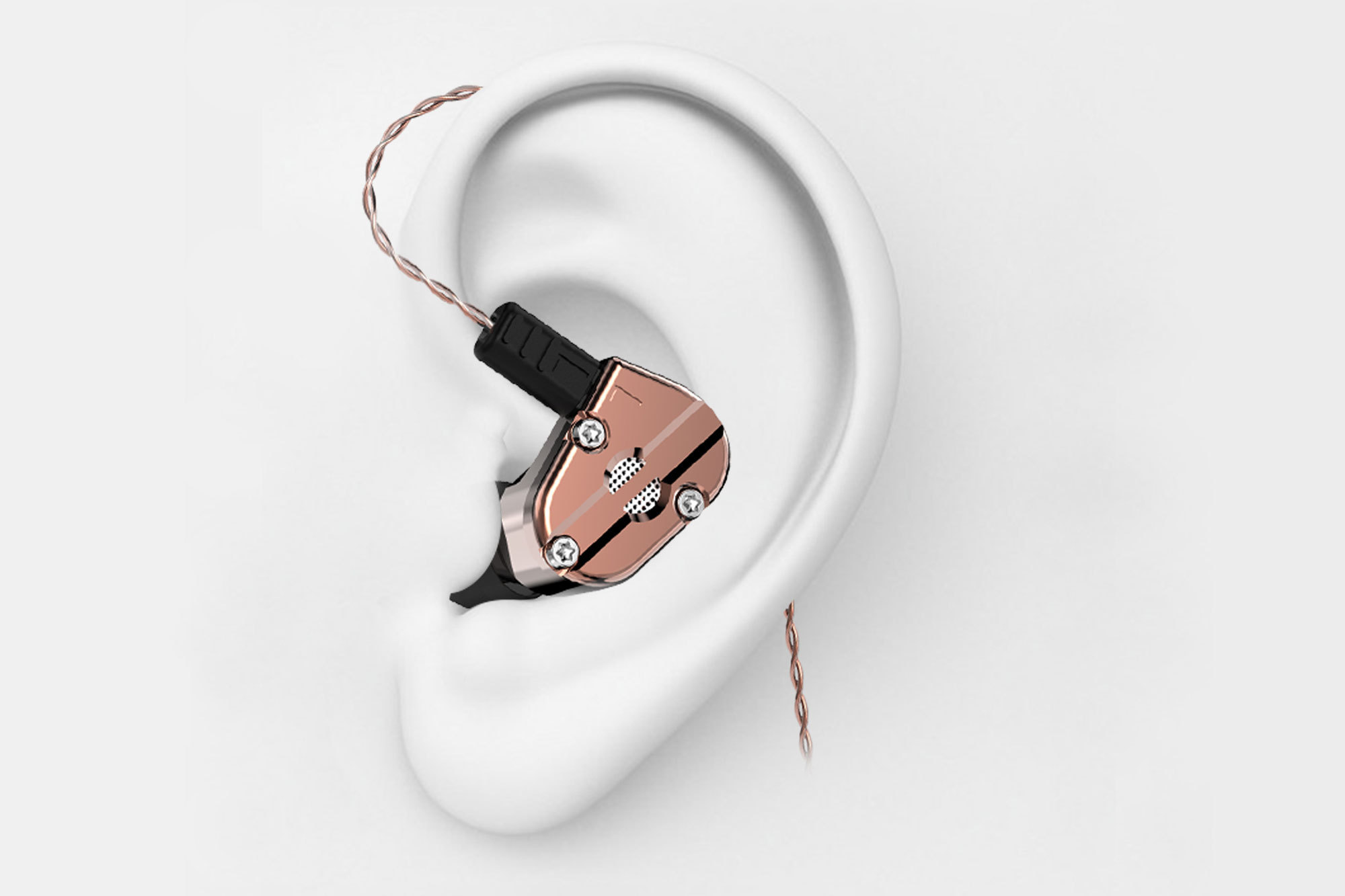 The QT5 is a wired IEM, which means you must have a source device with a headphone output—precluding newer iPhones and Android phones without an adaptor. The wire is an unshielded twisted pair, and the connector is a standard 3.5mm plug. Quite surprising for IEMs in this price range, the wire is detachable from each earpiece, allowing you to use third-party wires for presumed better fidelity or phone functions (microphone, answer/hang up calls, etc.). Also surprising at this price, the earpieces are made of metal, not plastic. The total weight is a mere 32 grams (1.1 ounces).

Each earpiece includes two drivers. A balanced armature reproduces the mid and high frequencies, while a dynamic driver with a composite diaphragm handles the bass. The frequency range is specified from 20Hz to 40kHz (no tolerance given) with a sensitivity of 105dB/W/m and an impedance of 22 ohms, which makes it relatively easy to drive. As always, be careful not to play music too loud; 105dB SPL can permanently damage your hearing after much less than one hour of exposure.

Unlike some IEMs, the left and right earpieces are clearly labeled, which I really appreciate. Also, the first couple inches of wire from each earpiece is sheathed in a clear plastic tube that tends to hold the shape of fitting around your ears, making them easier to place over time. 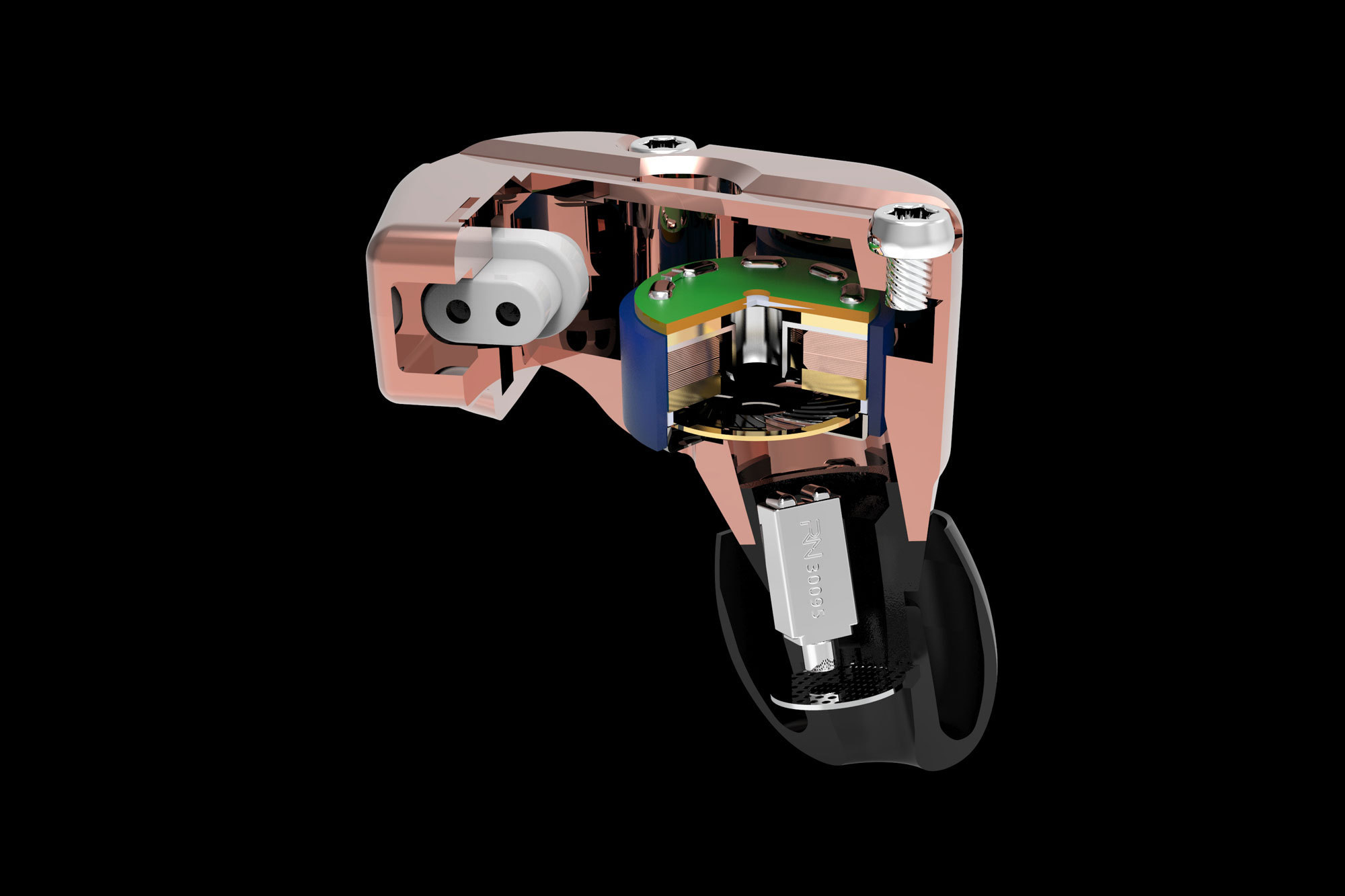 The wire includes a Velcro cable-tie that helps keep the wire coiled when stored away. However, it’s somewhat fiddly to use. I really wish the QT5 came with a small case of some sort, though for $32, I suppose that’s too much to ask for. RevoNext and other companies offer earbud carrying cases for less than $10, which is a worthy add-on in my view.

Like most IEMs, the QT5 comes with large, medium, and small interchangeable silicone eartips; the medium tips are pre-installed. For the best sound quality from any in-ear monitors, it’s critical to use the proper eartips so that your ear canal is sealed as much as possible. For me, that normally means using the largest eartips included with IEMs.

I tried all three sizes that come with the QT5 and found that, as expected, the largest ones worked best for me. The medium and small tips caused the sound to be very tinny with little bass. The large tips improved the sound substantially. I also tried the largest eartip that came with my JBL E10 IEM, which seals my ear canal even better, so that’s what I used for this review. 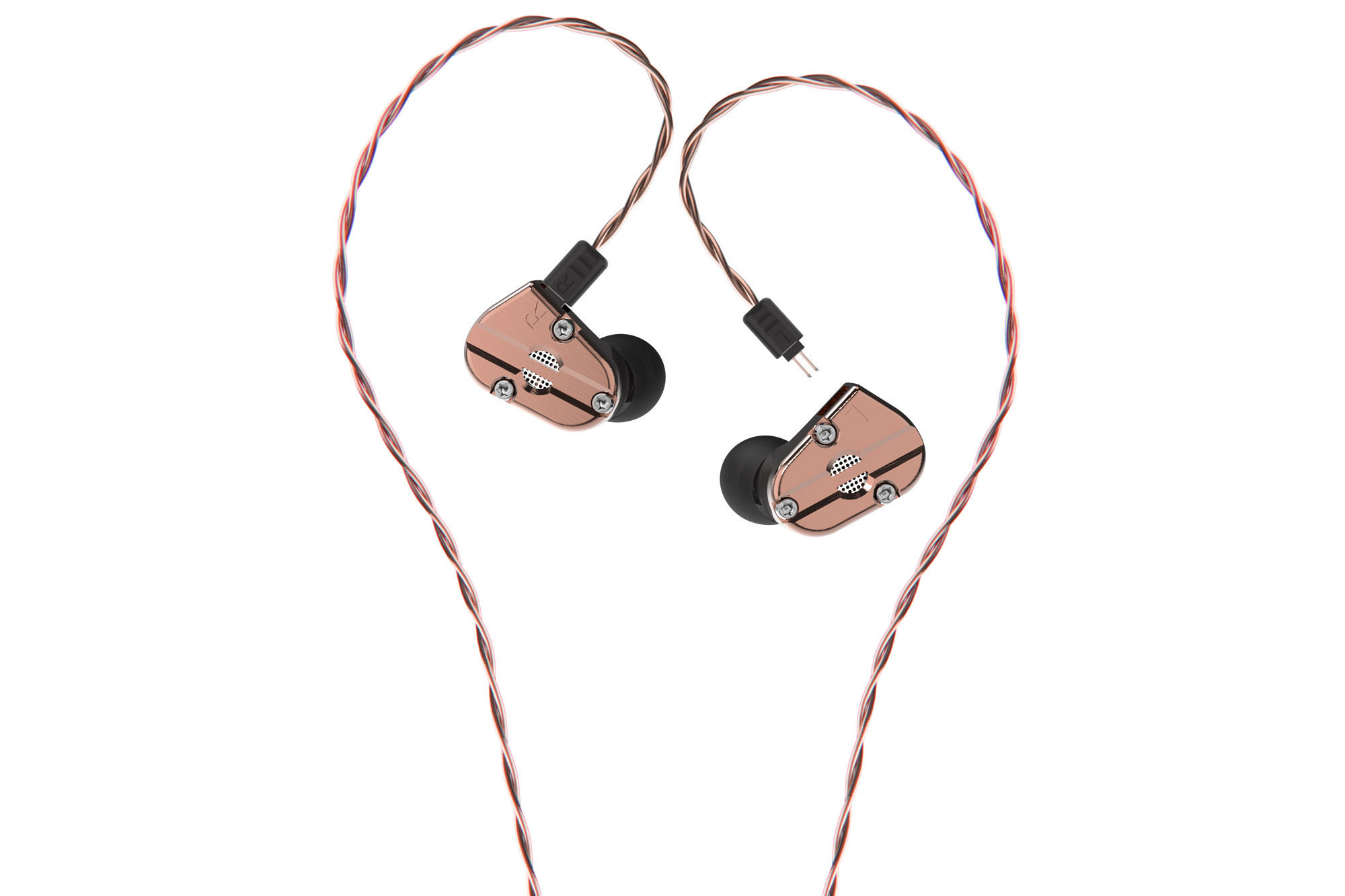 As I swapped the eartips from one size to another, I found it was very difficult to remove the ones that were there and to install the new ones; the sleeve that grips the “nozzle” is very tight. But after some frustrating fiddling, I managed to try them all to find the best one for me.

Once I settled on the best eartips, the QT5 was very comfortable in my ears. The earpieces are shaped to sit nicely in the concha with the wire draped over the top of the ear, and the eartips sealed my ear canals very well.

As I played a variety of music on my iPad, I was consistently astonished at how good these inexpensive IEMs sounded. Overall, the sound was rich, full, and well balanced with an open quality that let me hear deep into the mix. Also, the imaging was top-notch, spreading the mix across a smooth soundstage.

In particular, the rendition of vocals was warm and natural. I listened to Joni Mitchell singing “Coyote” from her album Hejira, Art Garfunkle singing “Two Sleepy People” from his album The Singer, and the Eagles performing “Peaceful Easy Feeling” from the group’s eponymous album. In all cases, the vocals were faithfully rendered with warmth and detail. I especially enjoyed the Eagles’ vocal harmonies and Joni’s incomparable voice.

I did hear a bit of stridency in some tracks—for example, on the Beatles’ “Back in the USSR,” the Band’s “Acadian Driftwood,” and the solo guitar on “Peaceful Easy Feeling.” But it was very slight and not noticeable on all tracks. 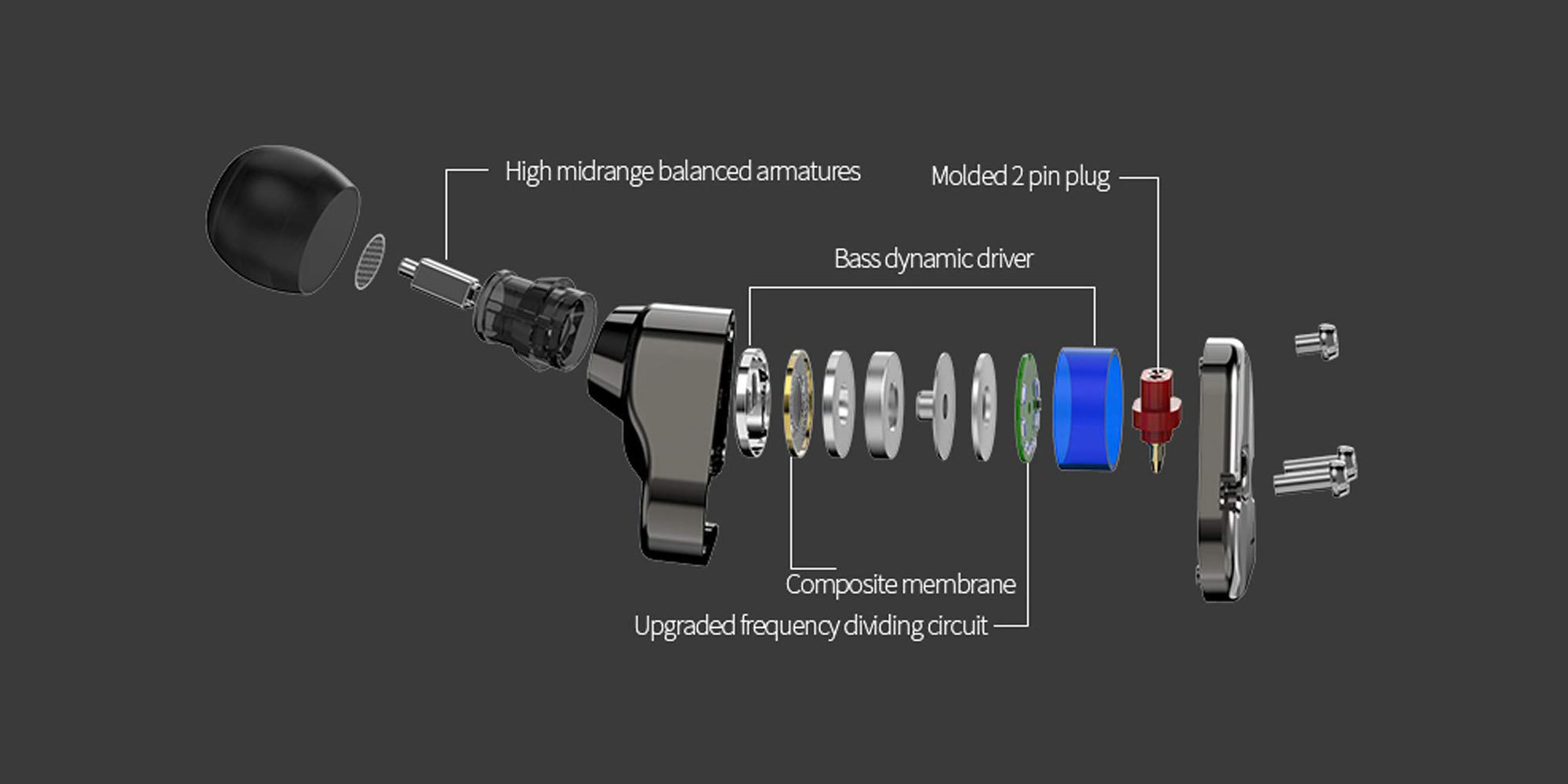 I didn’t hear any stridency on “The Blackbird” from the album The Celtic Harp, by the Chieftains; each instrument (flute, pennywhistle, uilleann pipes, harp, hammer dulcimer) was rendered artfully. Nor was Govi’s “Carry Me Away” from the album Andalusian Nights shrill in any way. The bass was deep and rich, and the rest of the instruments (electric and acoustic guitars, drums, congas) were full and well balanced.

To further test the QT5’s bass performance, I listened to “Flight of the Cosmic Hippo” from the album of the same name by Bela Fleck and the Flecktones. That track has lots of low bass, which the QT5 reproduced with aplomb. At the same time, the banjo, harmonica, and drums were all rendered faithfully.

Turning to classical music, I listened to “Montagues and Capulets” from Prokofiev’s Romeo and Juliet Suite, Op. 64, as performed by the Los Angeles Philharmonic under the direction of Esa-Pekka Salonen. The dynamic range from the quietest passages to the crashing fortes was excellent, and the low frequencies from the basses, bass drum, contrabassoon, and tuba were particularly impressive without overpowering the rest of the orchestra.

For a more subtle classical recording, I played “Thais: Meditation” by Jules Massenet from The 50 Greatest Violin Pieces by Joshua Bell with the Royal Philharmonic Orchestra under Andrew Litton. Bell’s solo violin sounded rich yet delicate—and perhaps a bit strident at loud volumes. But the dynamic range was excellent, as was the rendition of the orchestral instruments and sections. 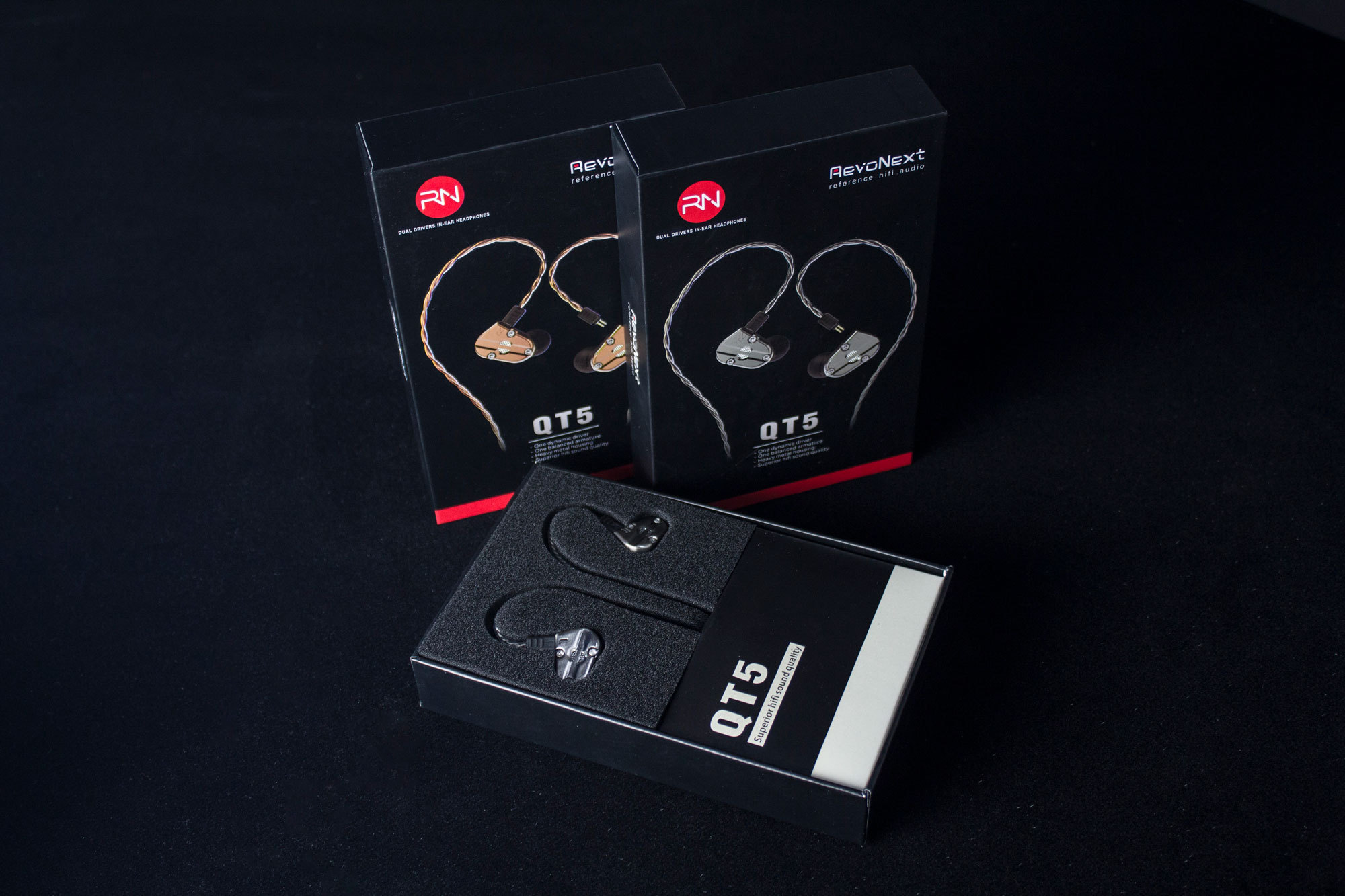 The RevoNext QT5 is a remarkable IEM, especially for such a low price. The overall sound quality is superb—as long as you have the right eartips, which must completely seal your ear canals. Once that proviso is satisfied, the sound is rich and full while remaining open and airy. And it’s well balanced among the different frequency ranges. The bass performance is exceptional, the midrange is clean and clear, and the highs are effortless. On some tracks, loud passages became a bit strident, but when it happened—which wasn’t always–it was minor.

The build quality is way better than one would expect at this price, with metal earpieces and detachable wires. My only complaint is that the Velcro cable-tie is fiddly to use, which means I didn’t always use it, leading to a tangled wire. I’ll need to find an appropriate carrying case.

Of course, headphone jacks are disappearing from smartphones in favor of Bluetooth. But if your device has a headphone jack—or an adaptor—you can’t go wrong with the RevoNext QT5. At a mere $30, it’s a real steal.

This wired IEM offers jaw-dropping sound and solid build quality for very little money. But to get the most out of it, you need to find the right eartips.

Don't miss a deal at Brian Tracy
Best offers at Bodybuilding
Discounts, Sales and Deals at Surfdome
Save your money with Ticketmaster UK
Online-Shopping with Farfetch
Best products at Newegg
Latest Posts