WHAT IS THE PANASONIC SC-ALL7CD?

The SC-ALL7CD is a compact audio system from Panasonic’s ALL multiroom range, offering network, CD, Bluetooth and USB playback, alongside DAB/DAB+ and FM radio tuners.

Link it up with other speakers in the range – such as the SC-ALL05 and SC-ALL6 – and you can send music around the house with Panasonic’s Music Streaming app. But the best part is that you can also re-stream any source from the SC-ALL7CD to other ALL speakers, including CD, Bluetooth and USB. With 4GB of on-board memory, you can even rip and store up to 25 CDs on the unit itself.

It’s a Swiss Army audio system, but the sound could be a little better. 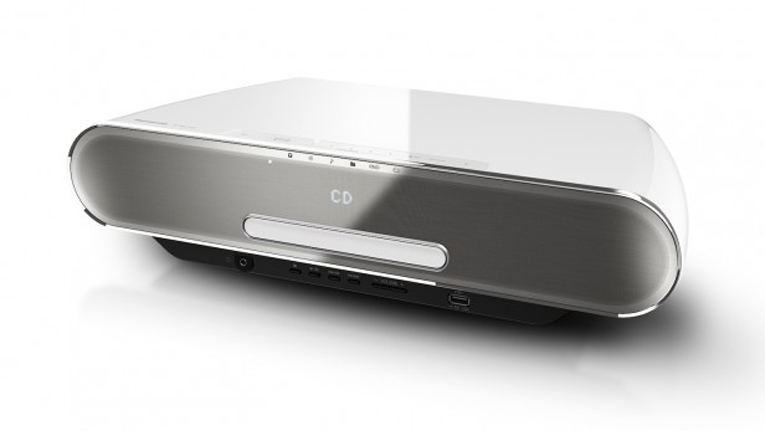 With its gloss black finish and alluring curves, the SC-ALL7CD is a great-looking system. It’s fairly wide for a so-called compact system, but it sits nice and low on a tabletop and tapers towards the back. The slim, pill-shaped front panel is embellished by a chrome trim, framing the fine-mesh aluminium grille. It really catches the eye

Behind the grille is a large, easy-to-read dot-matrix display, which shows the selected input. It stays there all the time, but you can dim it using a button on the remote. The CD tray is located below the display. That feels a little flimsy, but build quality is generally solid.

Sheltered beneath the main body is a control panel, offering volume and playback buttons, a 3.5mm headphone jack and a USB port. A row of touch-sensitive controls is located on top of the unit, including input selection and five Favourite keys that store albums or radio stations.

With so many sources on-board, the lack of physical sockets comes as no surprise. There’s an Ethernet port to connect the unit to a router and a DAB antenna, but that’s it. There’s no a 3.5mm input, which would have been useful for non-wireless devices. 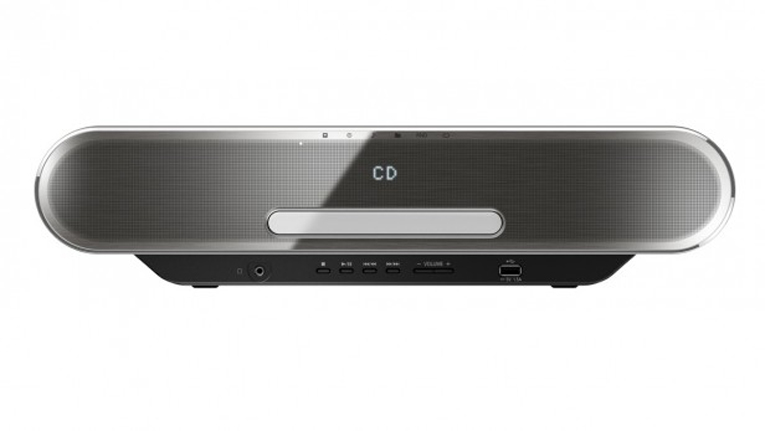 Equipped with dual-band Wi-Fi (2.4GHz/5GHz), the SC-ALL7CD forms part of a multiroom system with other Panasonic ALL speakers using the Qualcomm AllPlay platform. It’s controlled using the Panasonic’s Music Streaming App for iOS and Android. 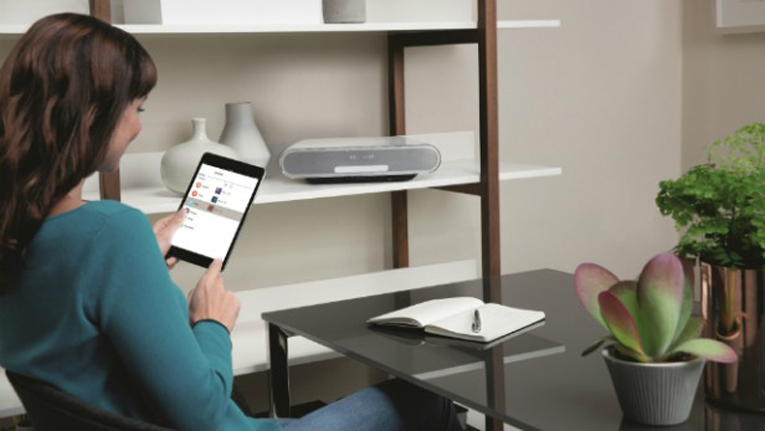 The app lets you access music stored on PCs and NAS drives, or stream it from Napster or Spotify. Internet radio comes courtesy of Aupeo Personal Radio and AllPlay Radio. It’s hardly a generous selection – there’s no Deezer or Tidal – but the presence of Spotify should suffice for most users. Note that you’ll need a premium account to use Spotify Connect.

You can perform all the usual multiroom tricks such as playing the same song through the entire system or sending different songs/sources to each speaker. But the nifty part is that you can also re-stream CDs, Bluetooth or USB from the SC-ALL7CD to other connected ALL speakers. It’s a handy feature if you haven’t got round to ripping your CDs and want to listen to them in rooms without a player. 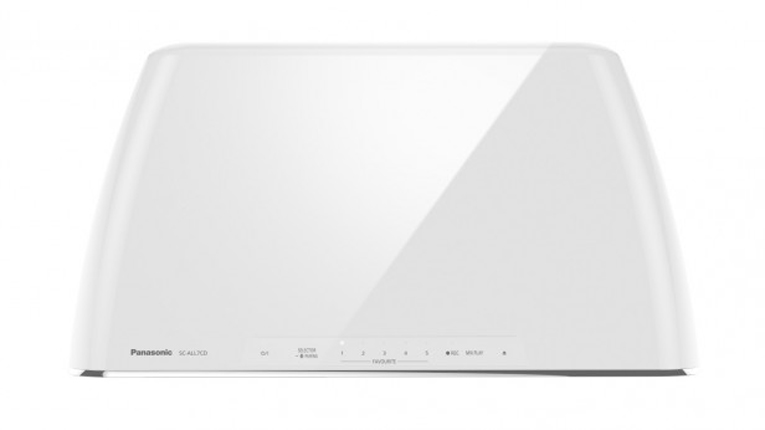 If you don’t want to keep loading discs then you can rip your favourite ones to the unit’s built-in 4GB memory. That’s enough to store five CDs in high-quality WAV, or up to 25 CDs in 320kbps MP3. There are two recording modes: HQ 1-CD and Multi-CD. In HQ you can store one CD as WAV in each of the five Favourite presets, while Multi-CD lets you rip five CDs to each preset in MP3. You have to commit to one or the other – you can’t rip WAV and MP3 to the same preset.

It’s a nice idea, but not a quick process. The unit rips them in real-time, so you have to listen to the album all the way through. That’s no great hardship but takes longer than fast-ripping on a PC.

As the gold badge on the box confirms, the SC-ALL7CD plays hi-res music, including FLAC and WAV up to 192kHz/24-bit.

True to form, Panasonic provides plenty of audio modes to play with. There are five EQ presets (Heavy, Soft, Clear, Vocal, Flat), bass and treble adjustments (-4 to +4) and three My Sound presets to store your settings. Dynamic Bass, Surround and Clear-Mode Dialog complete the package.

Operating the SC-ALL7CD without the app is ridiculously easy. The top and front-panel controls cover most bases and there’s an excellent remote in the box too. Phones make terrific remotes, but not when they die or lock you out. Multiroom speakers that also supply a physical remote always earn brownie points. 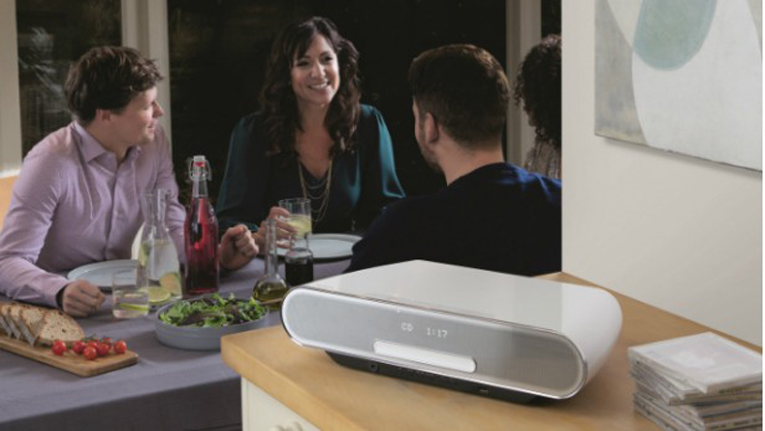 The chunky rubber buttons are clearly labelled and logically organised. Hit the Mix Play button and the Panasonic will shuffle tracks stored in the memory. The Sound and Setup buttons bring up the respective menus on the unit’s front panel – just use the direction keys to make your tweaks. Easy. My only complaint is that the volume controls aren’t more prominent.

Adding the SC-ALL7CD to your network is equally simple. Just plug it in, tell the app to find your speaker and transfer your Wi-Fi password. It worked first time, without any blips. 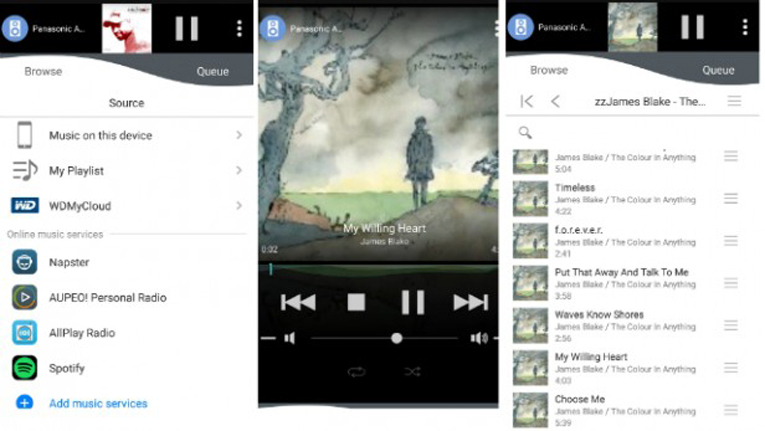 Panasonic’s Music Streaming app is one of the best multiroom apps I’ve tested. Streamlined menus, simple icons and welcoming colours make it a pleasure to navigate. Whether you’re moving between menus, scrolling through a big library or playing a track, everything happens instantly.

The Browse menu lists available sources, including NAS drives, PCs, streaming services and radio apps. You can add or remove services you don’t use. Further down is a list of sources that can be re-streamed.

During playback you can move between the various menus simply by tapping the relevant part of the screen. The Now Playing screen uses album art as a background and provides comprehensive playback controls. 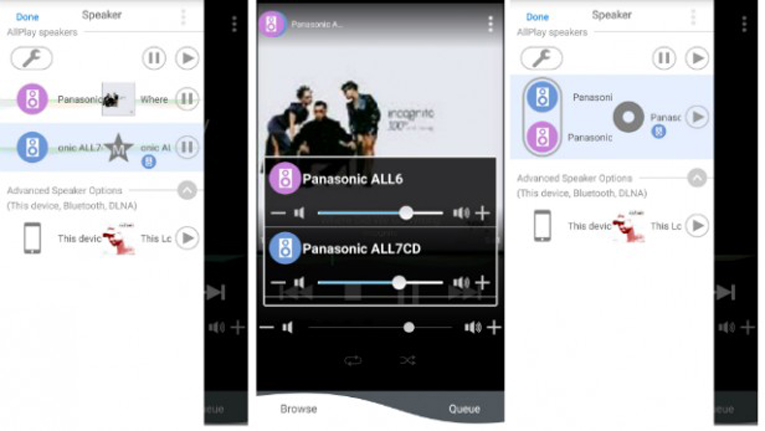 Tap the speaker icon at the top and a list of connected ALL speakers slides in from the side. Helpfully, each one is assigned a different colour and can be easily renamed. To group speakers together, simply drag and drop them onto each other – the boxes link together and display the playback source in the middle.

I teamed the SC-ALL7CD with Panasonic’s SC-ALL6 and ALL5 and tried out a variety of streaming scenarios – the system took them all in its stride. The re-streaming feature works well too, playing my CDs and Bluetooth devices through all three speakers in perfect synchronicity.

First impressions are generally positive, but it isn’t the slam-dunk I’d hoped for. The SC-ALL7CD offers a crisp, clear sound with detailed high frequencies that bring regular and hi-res tracks to life. Guitars have a well-defined twang, while hi-hats tick along to the rhythm accurately. It’s a lively and precise sound; easy on the ears but with enough bite to keep boredom at bay.

Also impressive is the ALL7CD’s spacious soundstage. The wide cabinet allows the drivers to be placed fairly far apart, resulting in an decent spread of sound. It opens up even further when you activate the Surround mode, although it exaggerates the treble.

The sound isn’t dense or congested – instruments and vocals are nicely separated and well organised. Kandace Springs’ soulful tones on “Thought It Would Be Easier” sound lovely; there’s a breathy texture to her voice, helping it stand out among the shuffling percussion and agile piano lines. The Panasonic also picks out the leading edge of double bass notes.

Plenty of positives then, but sadly the SC-ALL7CD doesn’t quite hit the spot in other areas. Despite the best efforts of the twisted acoustic port, its underwhelming bass reproduction results in a rather small, lightweight sound that lacks authority. 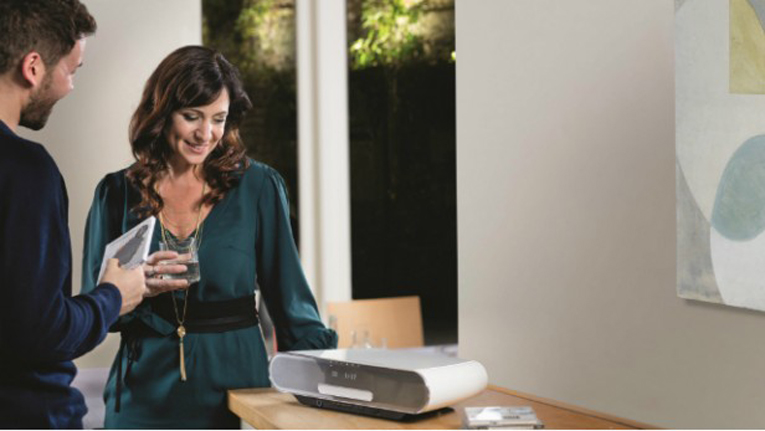 I spent a lot of time fiddling with the sound modes and tone controls to find the right balance, and that’s never a good sign. While playing “Points” by James Blake, which repeats a big descending bass note, only the Heavy preset comes close to reaching the levels of weight and body required.

All the other modes – Clear, Flat, Soft, Vocal – sound thin and unbalanced. Activating Dynamic Bass and increasing the Bass level to +2 or +3 helps in each case, but it sounds forced and muddy when you start pushing the volume up high. You can find a perfectly enjoyable balance, but the wow factor just isn’t there.

It’s a shame, because otherwise the SC-ALL7CD has all the makings of a killer sound system. It certainly isn’t a disaster, but those who crave a deep, full-bodied sound with thumping bass should seek their sonic thrills elsewhere. 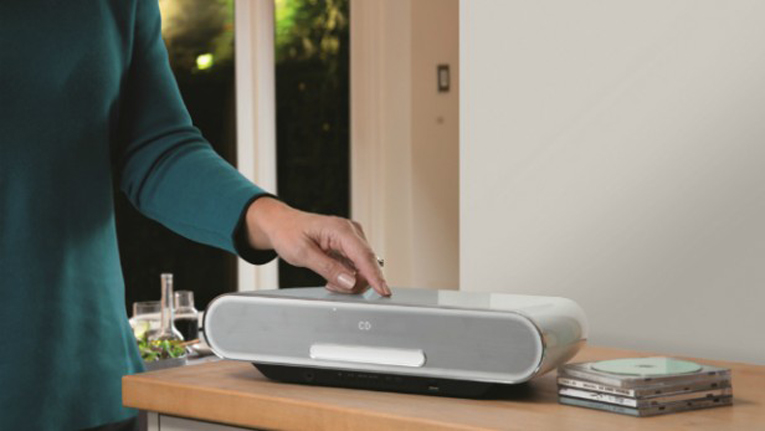 SHOULD I BUY THE PANASONIC SC-ALL7CD?

In most respects, the SC-ALL7CD is an excellent all-in-one system that does enough to justify the price tag. It plays music from almost any source and streams it around the house with consummate ease via Panasonic’s superb smartphone app.

It’s ridiculously easy to use and boasts nifty features such as CD ripping and re-streaming. Throw in a slim, curvy design and you have all the makings of a must-buy.

Sadly, aspects of the system’s sound quality deny it top marks. Underwhelming bass reproduction left me cold; it needs more weight and authority to match the best systems at this price. On a more positive note, the Panasonic delivers a lively, open and detailed sound with terrific width and clear vocals.

Don't miss a deal at John Lewis
Best offers at Currys
Discounts, Sales and Deals at Carphone Warehouse
Save your money with Newegg
Online-Shopping with Farfetch
Best products at House of Fraser
Latest Posts