This entry-level model from Olympus is pitched squarely at vloggers, bloggers and holiday snappers

A basic model at the bottom of Olympus’ mirrorless line-up, the PEN E-PL9 is designed to tempt those looking to upgrade from their smartphone.

It includes a full complement of automatic and creative modes, as well as more advanced modes for those keen to learn.

As always with the PEN range, Olympus has gone big on styling, with the E-PL9’s gorgeous retro look making it as much a fashion statement as a photographic tool.

Olympus PEN E-PL9 review: What you need to know

The E-PL9 doesn’t represent a huge upgrade from the older E-PL8. Many of its specifications and features are indeed identical – a 16-megapixel Micro Four Thirds sensor, 3-axis in-body image stabilisation, plus the 3in tilting touchscreen. 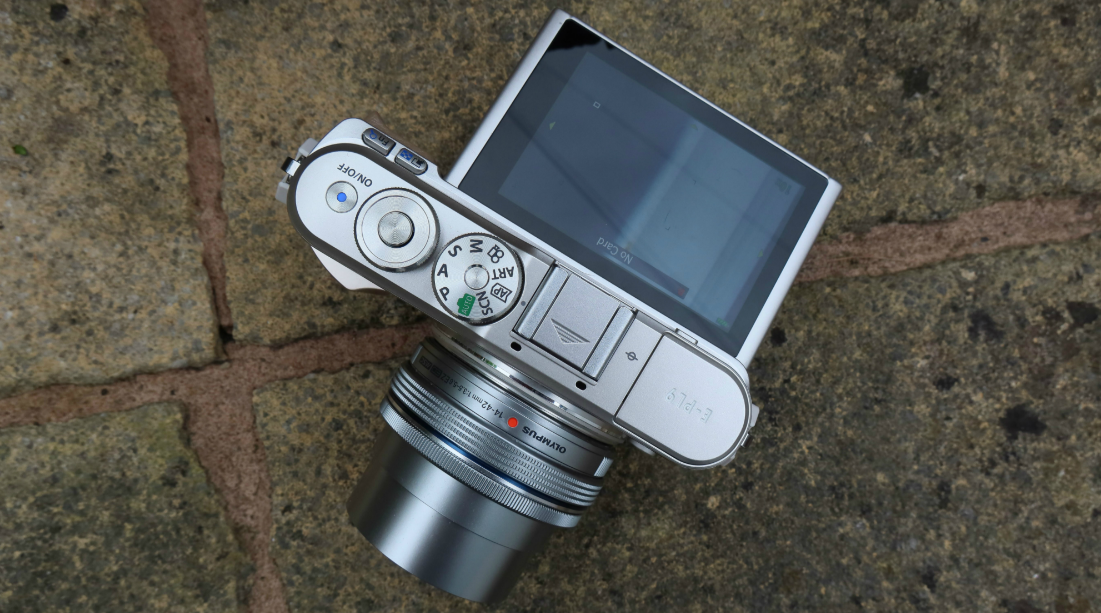 Plus ça change; so what’s new? The big one – especially for vloggers and filmmakers – is the introduction of 4K video recording, facilitated by the upgrade to Olympus’ TruePic VIII image processor. It’s the same processor as in models higher up in the Olympus line, such as the OM-D E-M10 Mark III and the OM-D E-M1 II. The newly uprated video mode gains some new features, too, such as slow motion and time-lapse.

Both cameras use a contrast-detect autofocus system, but the E-PL9 has a greater number of autofocus points (121 vs 81), which means a greater spread of AF points across the frame.

Right now the E-PL9 can be picked up for under £500, including Olympus’ basic-but-adequate 14-42mm f/3.5-5.6 lens. If you already have a Micro Four Thirds lens, the E-PL9 is even more of a bargain at £360. That’s good going for a travel camera that shoots good stills and video; should you want to expand from the kit lens, plenty of other optics are available for the Micro Four Thirds mount. 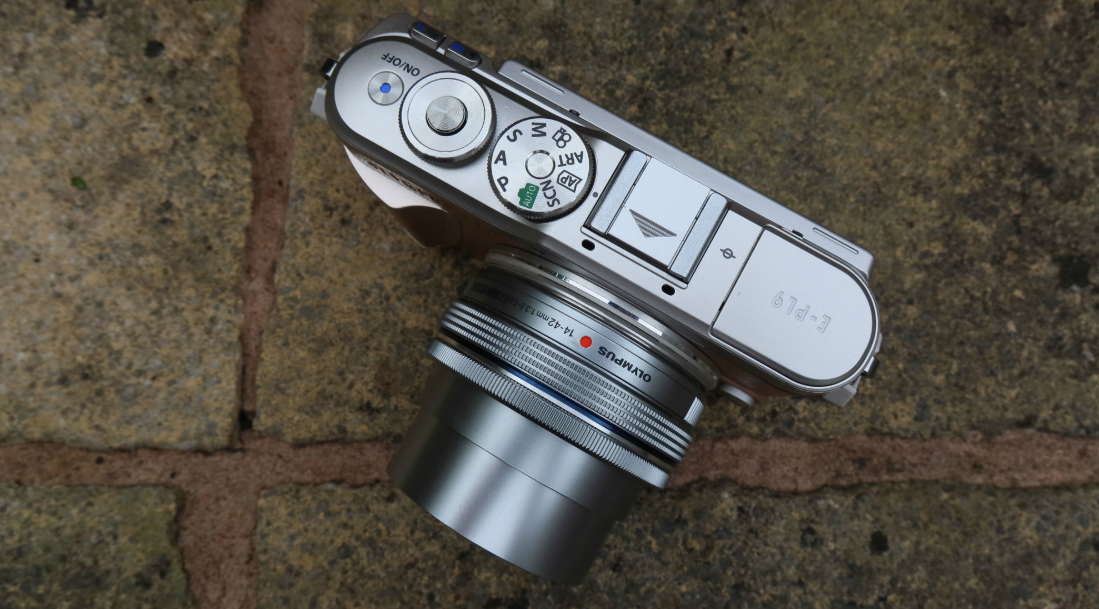 The E-PL9 competes almost directly with Panasonic’s Lumix GX9, which can be bought for around £500 body only, or £550 with a 12-32mm kit lens. Both are Micro Four Thirds cameras, so which one you go for is likely to be down to which you find the more aesthetically pleasing – although the GX9 offers a viewfinder, unlike the E-PL9.

If you’re more interested in stills than video, the older E-PL8 remains a good option if cash is tight – you can get hold of it for less than £350 including the 14-42mm kit lens. You’ll be limited to Full HD video, although there are a few small differences elsewhere too.

Design-wise, the E-PL9 is very similar to the E-PL8. That means you get a flat body with round corners for a nice fusion of retro and modern design. We got hold of the camera in “brown”, which doesn’t sound terribly appealing but is actually a very attractive camel colour with silver detailing. 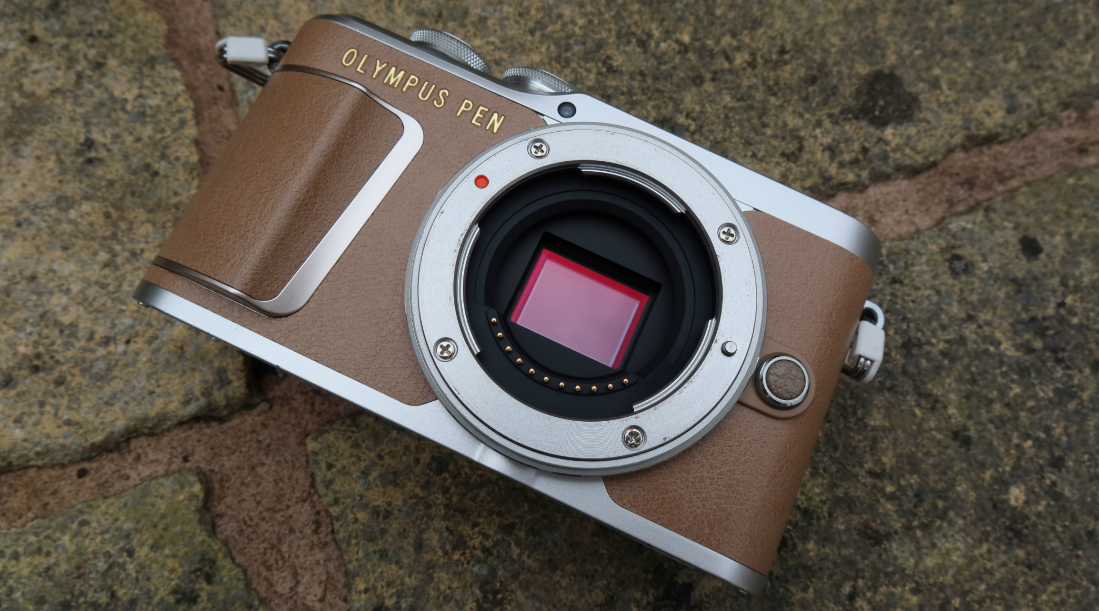 Although the E-PL9 has roughly the same dimensions as the E-PL8, the grip is deeper which makes it a little more comfortable. The mode dial has also been slightly enlarged. The flash is integrated now – a small, inconvenient external flash was supplied with the E-PL8. This comes at a price, though: there is still a hotshoe for a beefier external flash, but the accessory port is gone, so unlike the E-PL8, you can’t add the optional electronic viewfinder.

The size of the camera – just 117mm wide and 68mm tall – means it pairs well with the Olympus’ compact 14-42mm retractable zoom “kit” lens, as well as some of the smaller primes in the Olympus line up – a good example is the 17mm f/1.8 lens. Being a Micro Four Thirds mount, you can attach Panasonic lenses too.

Like its predecessor, the E-PL9 has a tilting touchscreen. Since there’s no option to attach a viewfinder it’s the only way to compose, so it’s a good thing the 3in, 1.04 million pixel screen is decent. It can be pushed to face all the way forward, making it handy for accurate selfie composition, although because the screen faces forwards underneath the camera you can’t simultaneously mount it on a tripod. 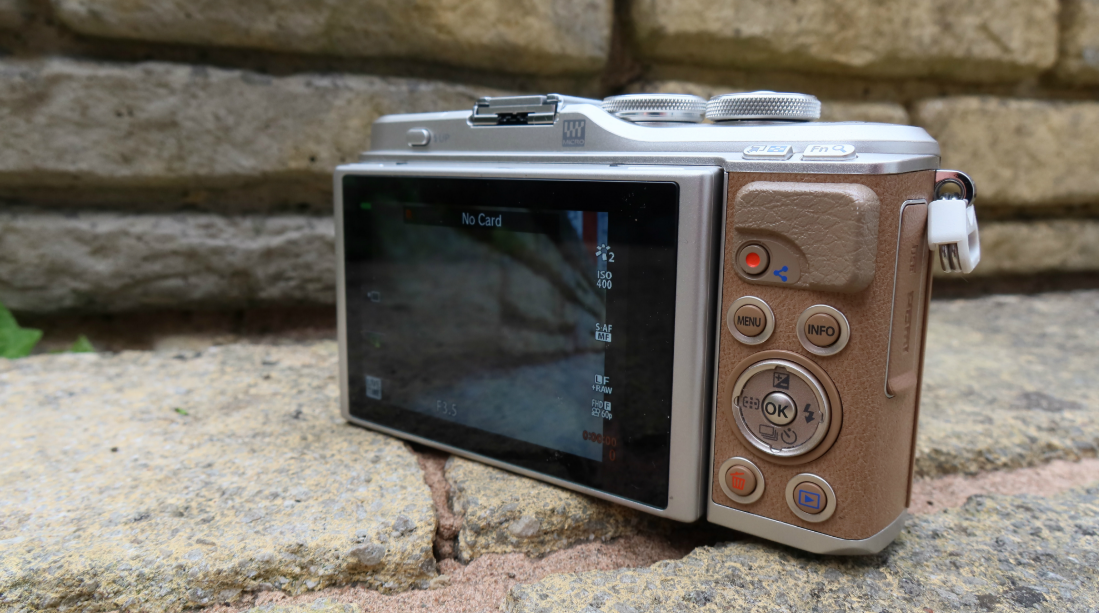 A range of different exposure modes can be accessed via the mode dial on the top of the camera, including fully automatic, semi-automatic and manual. A new mode for the E-PL9 is the “advanced photo” mode, which gathers together a number of creative options, such as multiple exposure, HDR, focus bracketing and so on. Frustratingly, silent mode is only to be found here; there’s no way to shoot silently in the normal modes.

Unlike some cameras aimed at travel photographers, the E-PL9 doesn’t feature USB charging, which seems a bit remiss. Instead, you need to use the dedicated charger
which comes in the box.

The E-PL9 has more autofocus points than the E-PL8 – good news for catching subjects which are off centre. The E-PL9 (and E-PL8) use contrast detection, rather than the faster phase detection, AF, but it’s pretty snappy in most instances – perhaps taking just a little longer in darker conditions. Beginners may prefer to leave the camera to choose an appropriate AF point, and, in our tests, the E-PL9 generally got it right.

The E-PL9 can produce some very nice shots – especially in good conditions. Image quality is slightly improved over the E-PL8, perhaps thanks to the newer image processor, but it’s not something you’re likely to notice unless pixel peeping to the extreme.

In good light, images are bright and punchy, with a pleasing level of saturation resulting in attractive colours. In lower light, the smaller sensor reveals itself compared to cameras with bigger sensors.

The 14-42mm kit lens is adequate as a walk-around lens, and if your main concern is grabbing holiday snaps, it’s fine. Get a bit more into your photography and you’ll crave additional lenses – apart from anything else, better lenses will get more from the sensor, as well as allowing you to fit lenses with bigger apertures for better low light performance.

If you’re a creative soul, the E-PL9 offers some nice options. The multiple exposure mode is easy to use and quick to get to grips with, while the digital filters are pretty fun. Being able to quickly use things like focus bracketing and create long exposures is great for those new to photography who want to try what might otherwise be difficult-to-crack techniques. 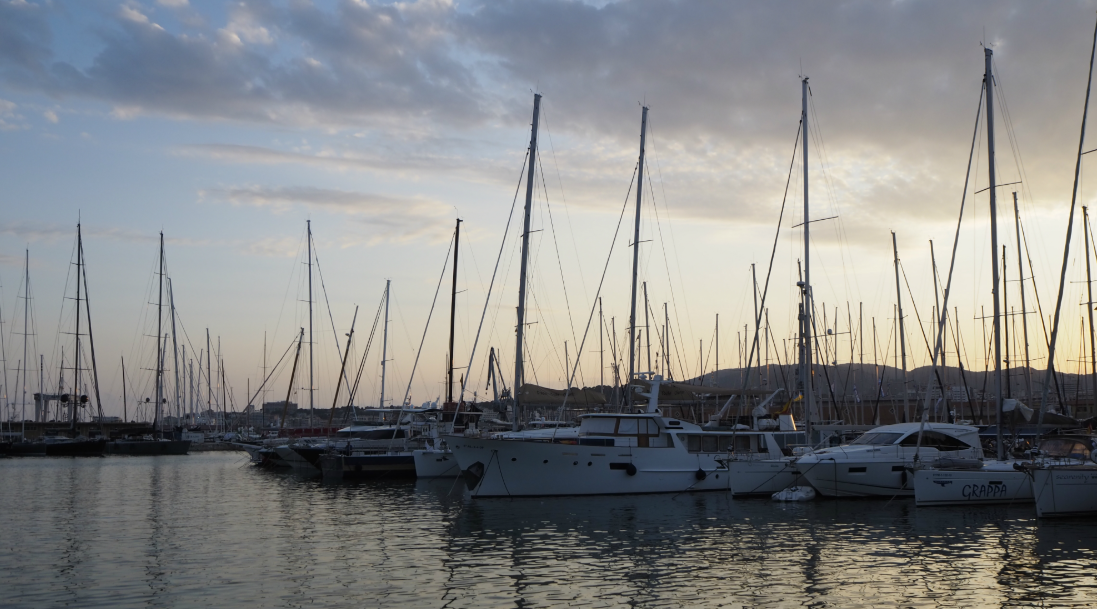 As for video: 4K is the new headline feature for the E-PL9. The camera can produce good, but the best results come if you swap the kit lens for something better. If you’re a vlogger chucking stuff up quickly you may not be bothered, but if you’re more serious about your filmmaking, investing in additional optics makes a lot of sense. There’s no microphone input, which will limit the E-PL9’s appeal to more serious videographers.

There’s a lot to criticise about the E-PL9. No viewfinder, no USB charging and a relatively modest set of specs may have some sneering. But when you factor in the price – under £600, lest you forget – perhaps it’s time to reframe things.

Olympus is aiming this at first-time buyers of “proper” cameras, so people who have never used a viewfinder (smartphone users, for example) won’t miss it. Its small size and weight makes it great for those travelling light, while still allowing you to expand with additional lenses. 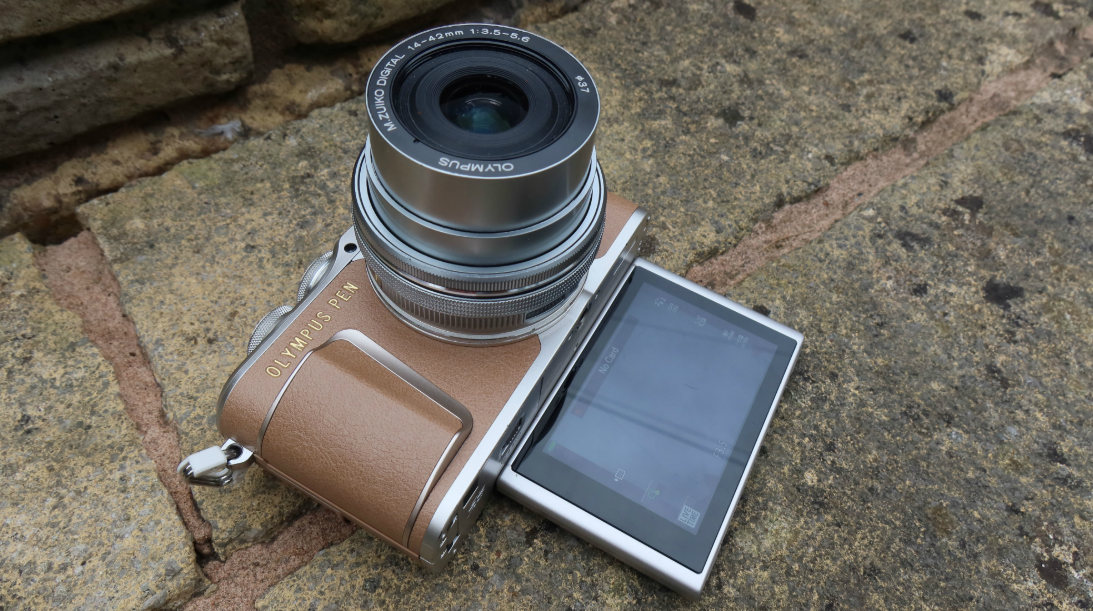 Beginners will also love the array of modes on offer – this is a really fun camera. There are some niggles, such as not allowing the user to shoot silently unless in a specific, automatic, “silent mode”, but otherwise it has a great set of options to work and play with.

Overall, this is a great little camera for those who are new to photography, or for those who have a little more experience but want something ultra-light and portable for their travels. It’s therefore very easy to recommend.

Don't miss a deal at EE Mobile
Best offers at H&R Block
Discounts, Sales and Deals at Adobe
Save your money with Currys
Online-Shopping with Marks and Spencer
Best products at Bodybuilding
Latest Posts