Oculus Quest 2 review: The only VR headset you need

The Oculus Quest 2 achieves something remarkable: it builds upon the unexpected success of its predecessor in almost every way. Like the Quest, it squashes virtual reality into a portable package, side-stepping the need for a gaming PC or compatible smartphone and freeing you from cables in the process. Unlike the Quest, however, the Quest 2 starts at an extraordinary £299. Somehow, Oculus has improved the overall product whilst also reducing the cost by £100.

If the Quest 2 had launched at the same price as the original Quest, we would still have loved it. Thanks to this miraculous price drop, however, the Quest 2 is now our favourite VR headset of all time.

Oculus Quest 2 review: What you need to know

Rather than depending upon a gaming PC, the Quest 2 uses a smartphone processor to run the games you play. In this case, that’s the Qualcomm Snapdragon XR2, a variant of the Snapdragon 865 found in the latest premium Android smartphones. Pair this top-of-the-line processor with 6GB of RAM and you’ll find that the Quest 2 is substantially faster than its predecessor. 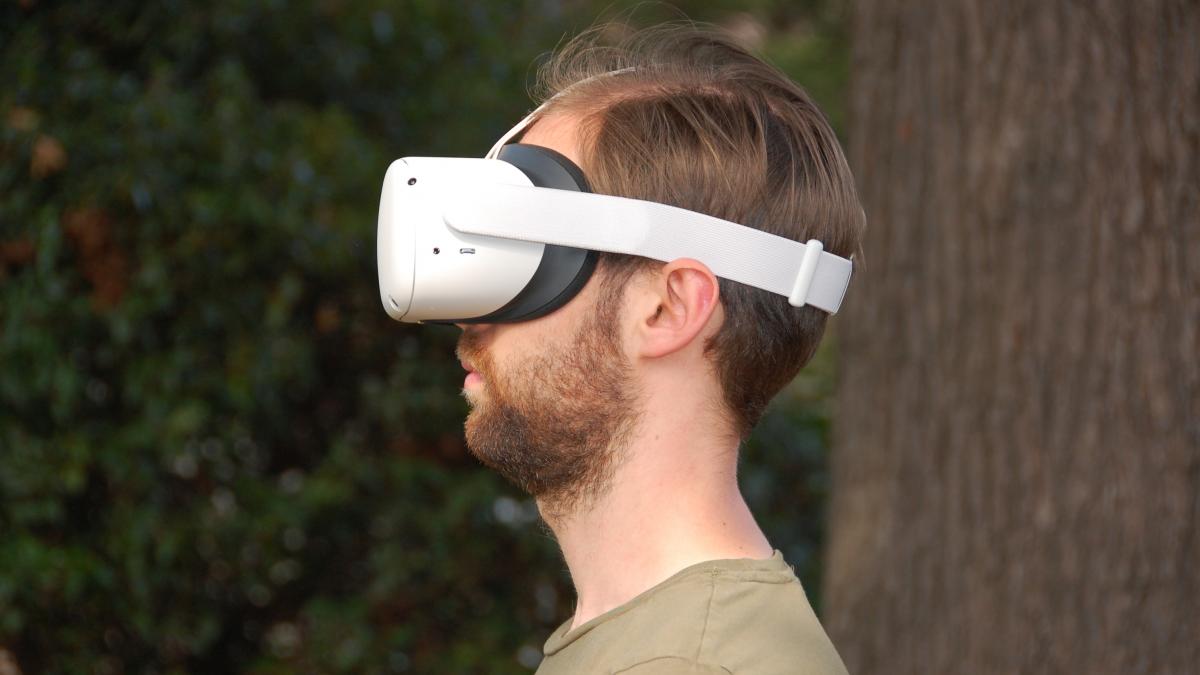 It also has 64GB of internal storage as standard but you can raise that to 256GB for £100 more. Although I don’t think the added storage is necessary, game hoarders will be pleased.

Before I continue, it’s worth talking about Facebook, Oculus’ parent company. By October 2020, new Oculus users will have to log in to their device using a Facebook account, rather than an Oculus one. Existing Oculus account holders can choose to swap to Facebook (or not) until January 2023, at which point it will happen automatically.

Some have expressed concerns about Facebook’s use of data, while those without Facebook accounts may be reluctant to create one just to enjoy VR. At the end of the day, though, many people use Facebook regularly and will appreciate the simplicity of a single account for multiple services.

Perhaps the best thing about the Quest 2 is the price. The base 64GB configuration will set you back £299, which is £100 cheaper than the original Quest and substantially cheaper than any other serious VR headset available now. 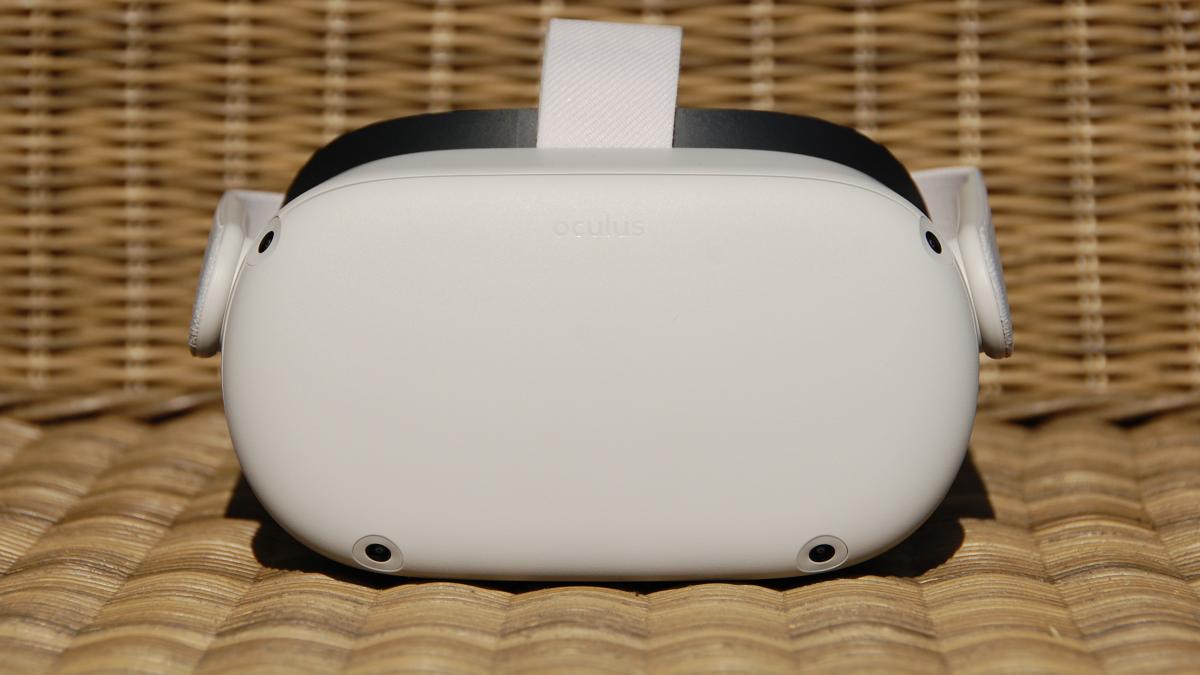 Not that there are many to choose from. Neither HTC’s Vive Cosmos (from £700) nor the mighty Valve Index (£919) will appeal to anyone other than VR enthusiasts, even if their specifications are better. Sony’s PSVR (from £229), while cheaper, is low-spec and for PlayStation only. With Oculus killing off the Quest (from £399) and the Rift S (£399) within the next year, the Quest 2 really will shortly be in a league of its own.

Let’s not mince words: The Quest 2 is a good-looking thing. I can’t compare it directly to the Quest but it certainly looks and feels smaller and it’s definitely lighter – by over 70 grams, in fact. Oculus has opted for a light grey/white paint job this time, which may or may not be your bag. I certainly like it. 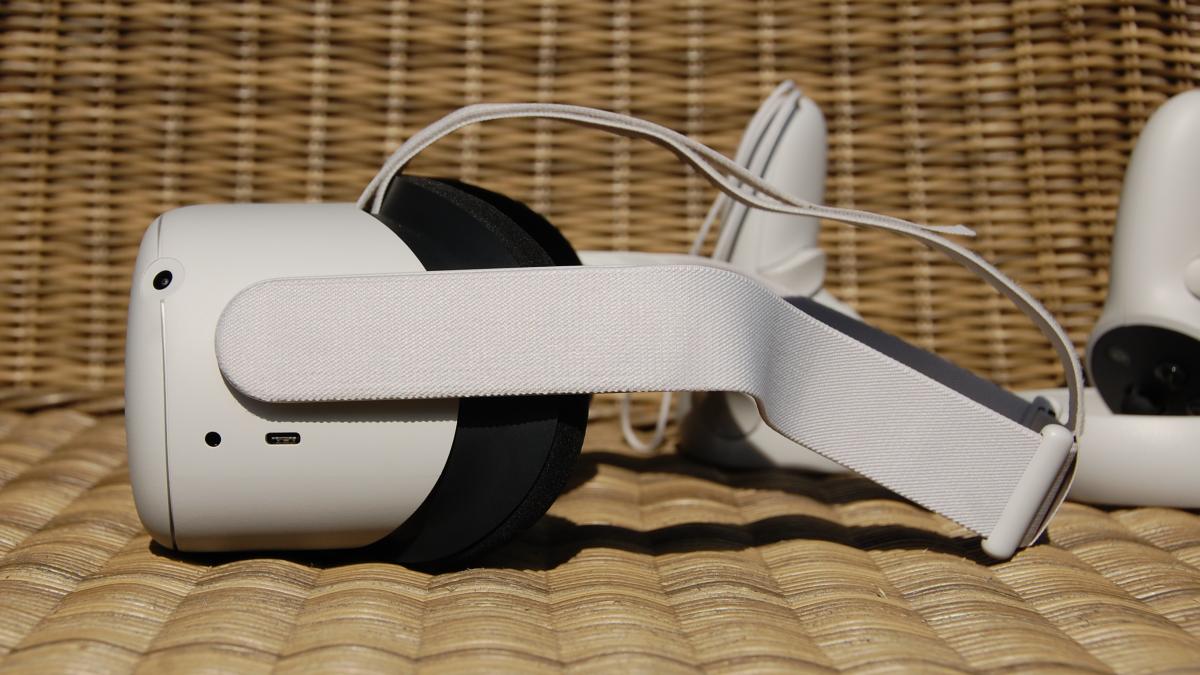 On the left side, you’ll find a 3.5mm headphone jack and USB-C port; on the right, the power button and, on the bottom, the volume rocker. Oculus has binned the utilitarian plastic straps and replaced them with fabric ones, which is both a blessing and a curse; they make the headset more compact and comfortable, but tightening the headband on the fly via the new sliders is tricky.

Fortunately, Oculus has a solution. The firm is launching a halo-style “elite” headband – the kind found on the Oculus Rift S – as the first of several optional Quest 2 accessories. These halo headbands distribute weight better and are easier to adjust. This particular one will clip onto the protruding arms either side of the Quest 2, and is available at launch for £49.

Regardless, the Quest 2 is as comfortable as a VR headset can feasibly be and I found that keeping it in a comfortable position was a simpler task – the reduced weight certainly helps here. The face foam is a little softer, and a little deeper too, although it will still imprint on your face over time.

The Quest 2 still has four inside-out tracking cameras positioned as they were on the Quest, and there’s still the option to adjust your interpupillary distance (IPD) manually. Oddly, you’ll have to push the lenses themselves apart or together to do this, which means removing the headset. I would prefer a standard IPD slider but at least the option is there – the Rift S inexplicably reduced IPD adjustment to a virtual setting.

I should also mention the controllers, since they have also improved substantially. They now last four times longer than the old ones on a single AA battery and have a larger surface area on which to rest your thumbs. I prefer the look of the original controllers but it’s very hard to criticise these in the light of such improvements. 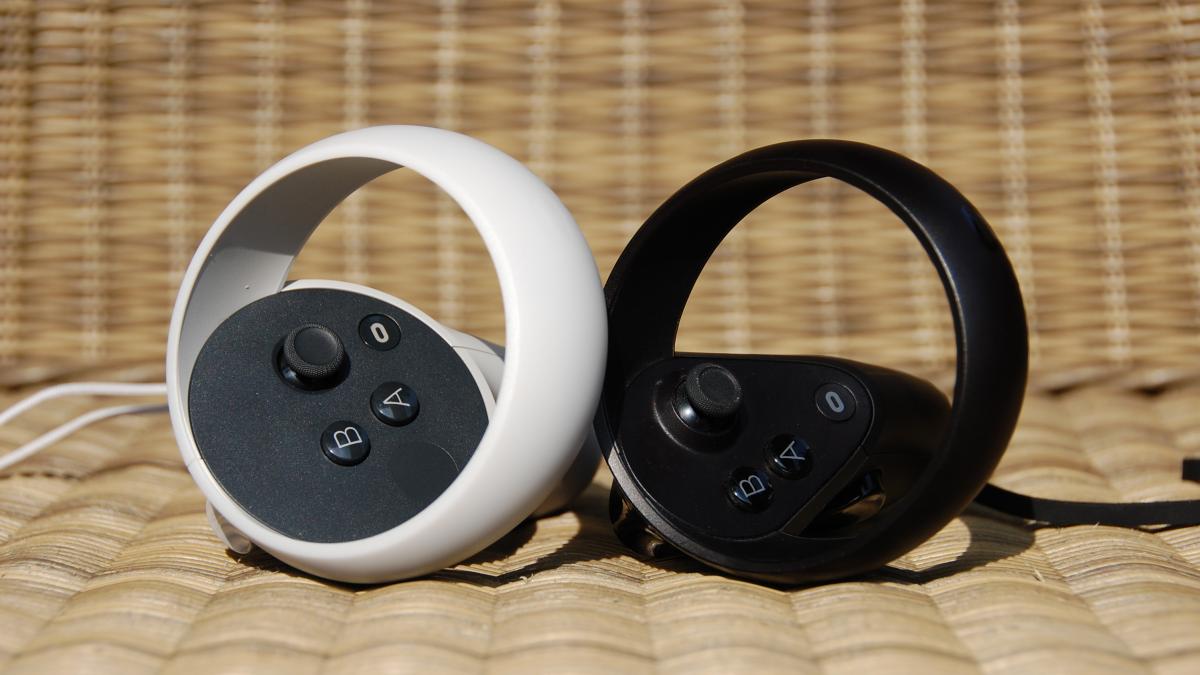 Not only does this display have the highest resolution of any Oculus product ever, but it also refreshes at 90Hz, which makes a noticeable difference to how fluid gaming or app usage looks on-screen. I say this every time I try a new VR headset but it’s always true: this is the best VR display I’ve ever used. Colours are vibrant, the black level is excellent and individual pixels are relatively hard to make out.

The Quest 2 has a simplified user interface, with quick access to the Oculus store, your games library, social aspects and settings but none of the extravagant “Oculus Home” functions of the Quest or Rift S. Not that I’m complaining: I’m not using the headset to mill about in a virtual house. 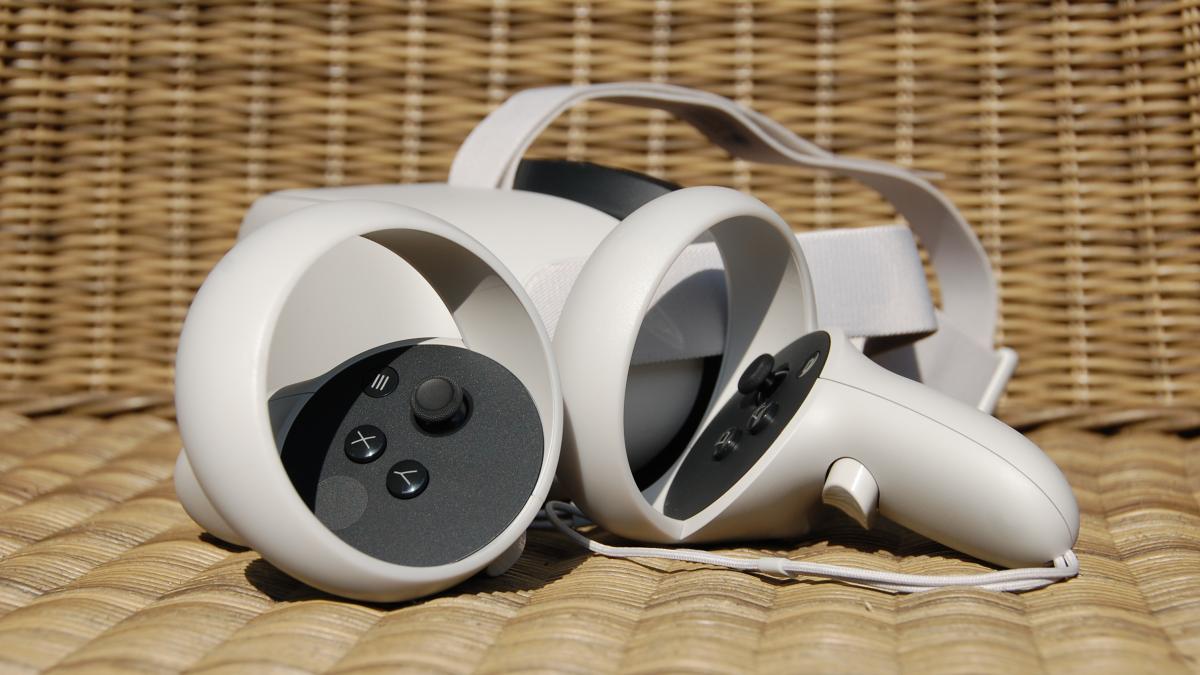 I’m using it to play games, and the Quest 2 delivers in that regard. With hundreds of titles to choose from – including staples like Beat Saber, Superhot and Vader Immortal, as well as some intriguing new entries, like Jurassic World: Aftermath – you won’t go wanting.

Then, of course, there’s the small fact that the Quest 2 supports Oculus Link, meaning you can plug it into your gaming PC via a single cable and play games from your Steam library. It’s no surprise that Oculus is retiring the Rift S: the Quest is an excellent PC VR headset in its own right.

It’s hard to evaluate how well the Quest 2 performs but I noticed only one instance of unresponsiveness after I travelled to and from the Oculus store too quickly. Otherwise, navigating the menus was seamless, and games played beautifully. This is hardly surprising, given the hardware running the show, but it’s worth pointing out.

One thing that standalone VR still hasn’t quite mastered is battery life. The Quest 2 will run for between two and three hours and takes two-and-a-half hours to charge from empty, which is only a little better than the Quest. It’s a good thing VR gaming isn’t the sort of thing you want to do for long periods at a time.

My only real complaint with the Quest 2 thus far, in fact, is that I couldn’t get the casting feature to work once during my time with the headset (and I know first-gen Quest users have experienced similar issues). Gaming in VR is an inherently isolating experience, so being able to watch the current user’s progress on screen would be a huge plus. To be fair, the feature is still in beta, but I do wish Oculus hadn’t launched it before it was usable.

The Oculus Quest 2 takes everything we loved about the Oculus Quest – the cable-free experience, the strong game library, the ease of use – and improves on it significantly. This is exactly what a VR headset should be: lightweight, powerful and so simple that mainstream adoption becomes less a hope and more an expectation. The reduced price will go quite some way to helping in that regard, too.

There is no simpler way to put this: if you want a VR headset, buy the Oculus Quest 2. It doesn’t matter if you’re an experienced PC VR gamer or a virtual newcomer; the Quest 2 is undeniably the only headset worth your money.

Don't miss a deal at Groupon
Best offers at Argos
Discounts, Sales and Deals at Farfetch
Save your money with Sky
Online-Shopping with House of Fraser
Best products at O2 Mobile
Latest Posts