Nextbase’s latest dash cam, the 622GW is the complete package, offering fantastically detailed day and night 4K UHD video, Alexa support, as well as Emergency SOS in case of, well, emergency. Add support for Nextbase’s rear, interior, and interior telescopic camera modules, and guess what? You have the best dash cam in existence. At $400, it’s also the priciest, but the cream of the crop generally is.

The 622GW is a smooth, pewter-and-black looker. It’s about 3.5 inches wide, and 2 inches deep, but a bit heavier than the average dash cam. That translates to a feel of quality that so many dash cams lack. The outstanding physical feature is the 1-inch extruded lens body. It no doubt contributes to the 140-degree field of view, 4K UHD (3840×2160), 30fps capture system’s fantastic results. The polarizing filter likely doesn’t hurt either. 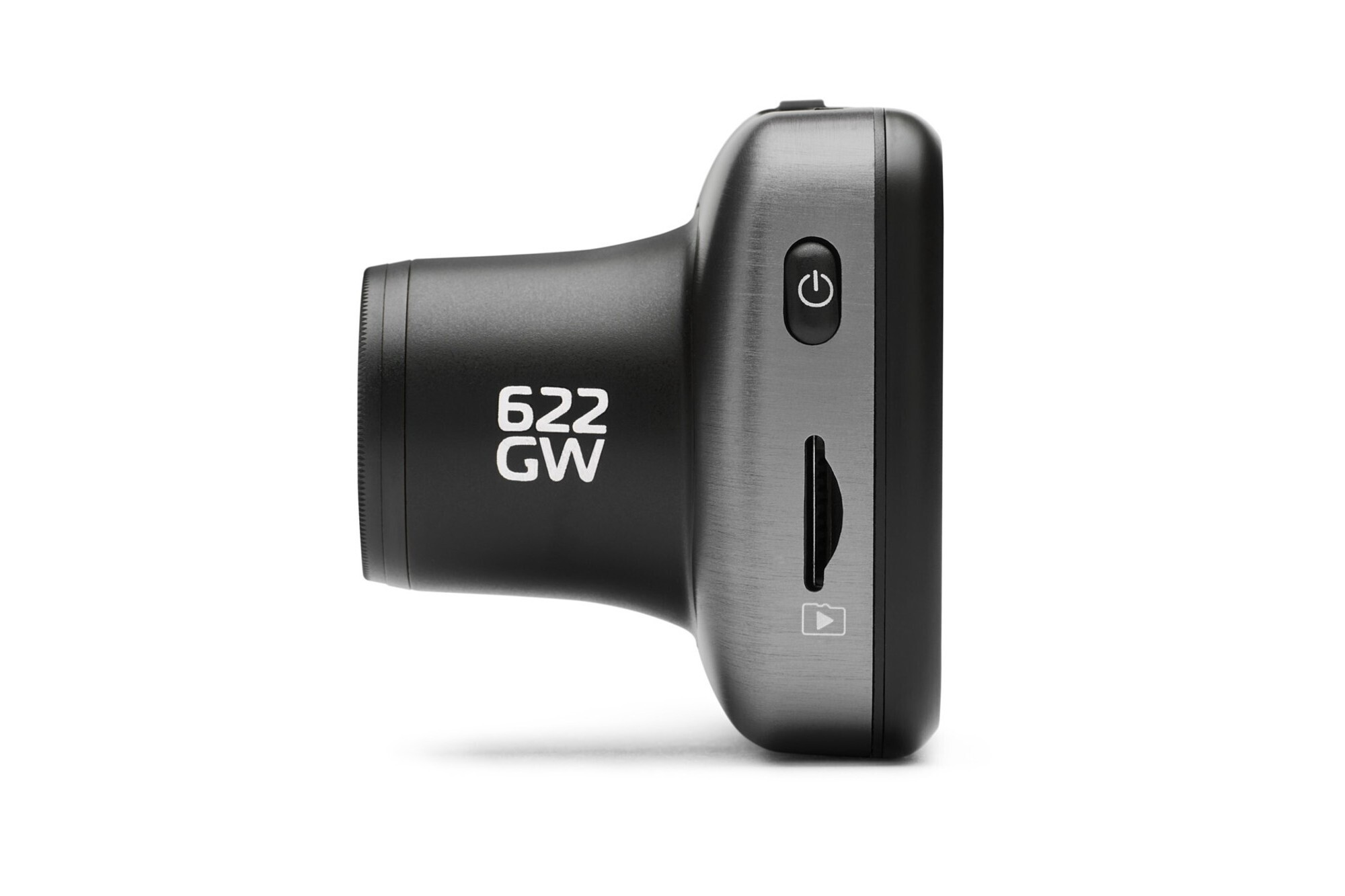 The 622GW ships with both magnetic/adhesive and suction mounts, which attach to the GPS mount, which in turn, snaps magnetically into place on the front of the camera. The mount offers a fair amount of adjustment vertically, as well as a lesser but adequate amount horizontally. You shouldn’t need to be too precise in your placement of the mount on the windshield. The power cable (auxiliary port) attaches to the GPS mount via a mini USB connector whose cable feeds nicely over the top of the camera.

On the left side of the camera are the power button and the micro SD card slot, while the right side has the mini-HDMI port that’s used for direct video output, as well as hosting a 1080p rear camera module. Nextbase offers three such modules: one for interior captures, one that attaches to your rear window, and, my personal favorite, the direct-attach telescopic module. The latter eliminates the hassle of running a cable, yet still provides decent coverage to the rear. The bad news? Said modules are $100 apiece. Hmm.

Rounding out the hardware is a 3-inch, 854×480, wide-aspect touchscreen display. It delivers a very sharp and clear image, with no jagged text, etc.

Other features include the aforementioned Alexa voice control (“Alexa, ask my dash cam to start recording”), backup assistance via an attached rear-view camera, and Emergency SOS. ESOS is a service provided by Nextbase that works in conjunction with your phone to alert services in the event of, say, a severe accident in which you might be incapacitated. It’s free for a year, but $4.99 monthly, $49.99 yearly, or $99.99 for three years after that. There are some limitations and legalese you’ll want to read before committing to the service.

The rather hefty 320mAh battery supports surveillance/parking mode for roughly two and a half weeks. The 622GW’s G sensor will awaken the camera to take video of whatever rousts the camera from its sleep.

There are no cloud uploads, as with the Own, Nexar, or PureCam dash cams, however, you can easily offload videos to the Nextbase iOS/Android phone app via 5Ghz Wi-Fi. (Bluetooth 5.0 is used to connect to the app). The app also provides a live view and Nextbase provides a PC playback app so you can track where you’ve been.

Though 4K UHD (3860 x2160) burns through SD cards in a hurry (roughly four times 1080p), the 622GW’s captures have convinced me that, when done properly—it’s worth it. The detail in the 4K UHD captures is fantastic, the color is wide-gamut and accurate, and the motion compensation is first class. I could go on, but take a gander at the captures below and tell me if you don’t agree. 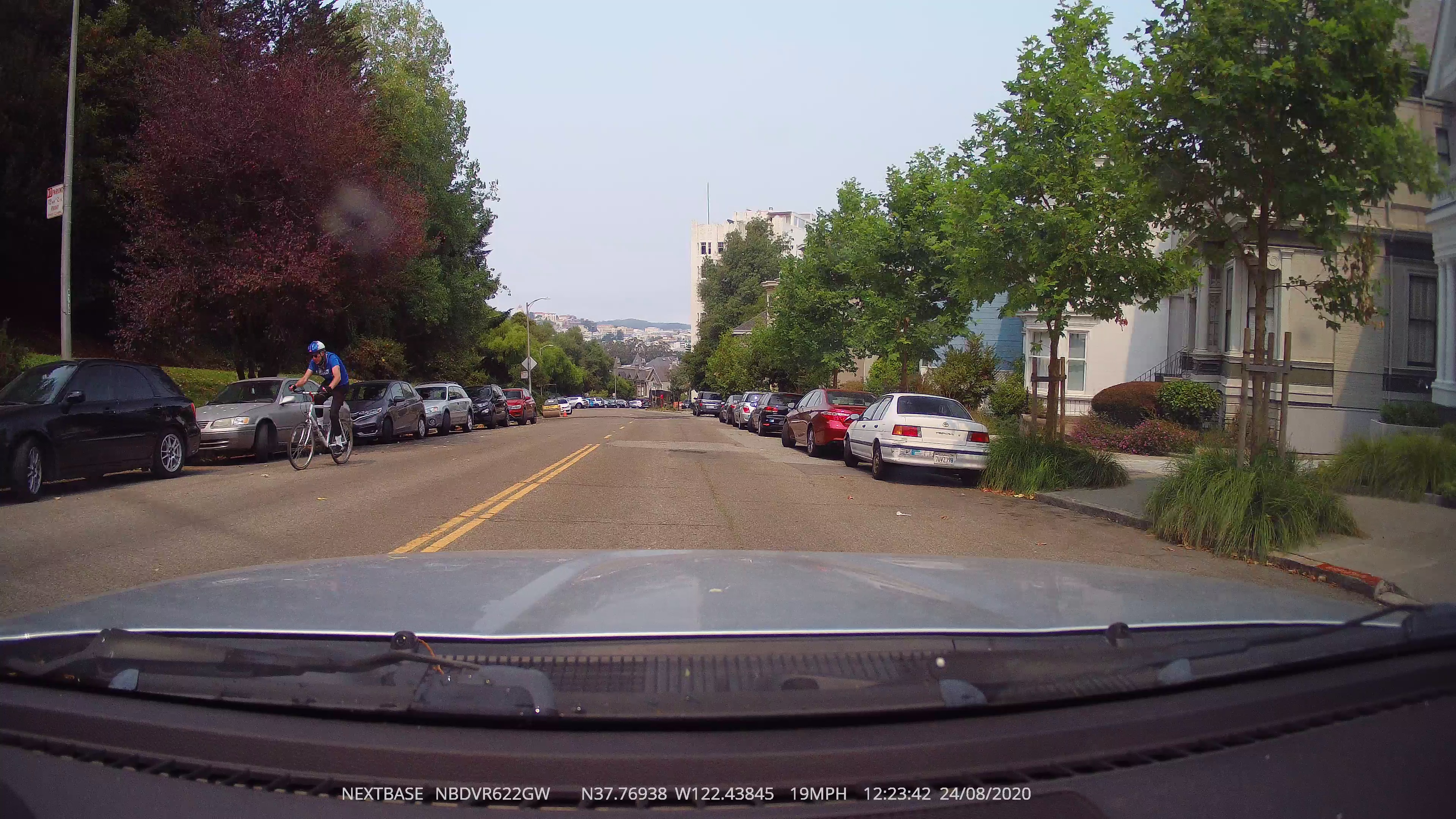 If you’re not impressed (click on the image to expand it and look at the first license plate), I don’t know what to tell you. Check the captures from other cameras, then come back and look again. 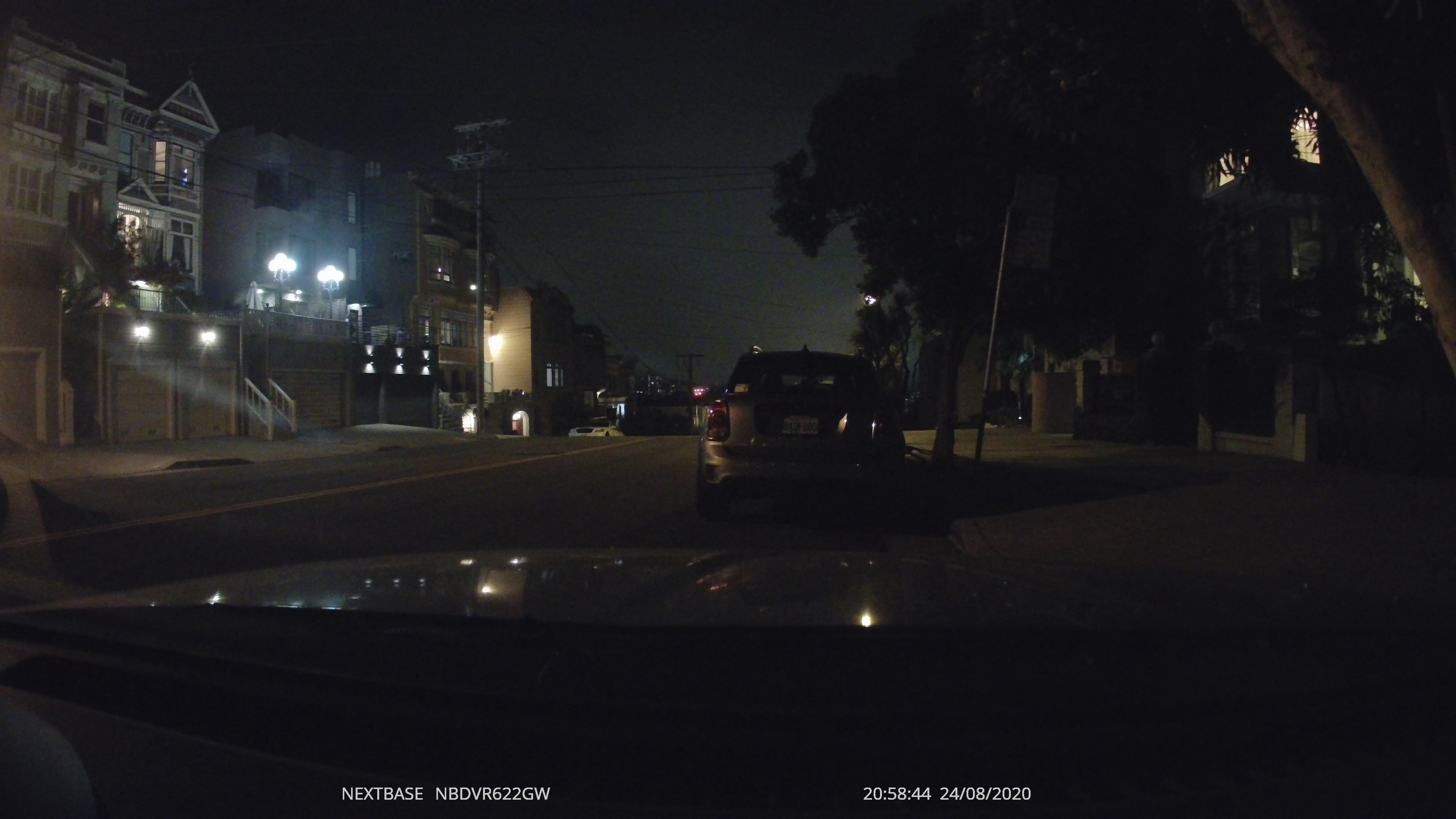 The above night capture is a bit darker than reality, but the brightened image below shows that an impressive amount of detail is captured. Even if you don’t see it by default. What truly impressed me, however, is the richness and accuracy of the color in low-light situations—something I’ve never seen before from a dash cam. What you see below is darn close to what I saw with the naked eye. 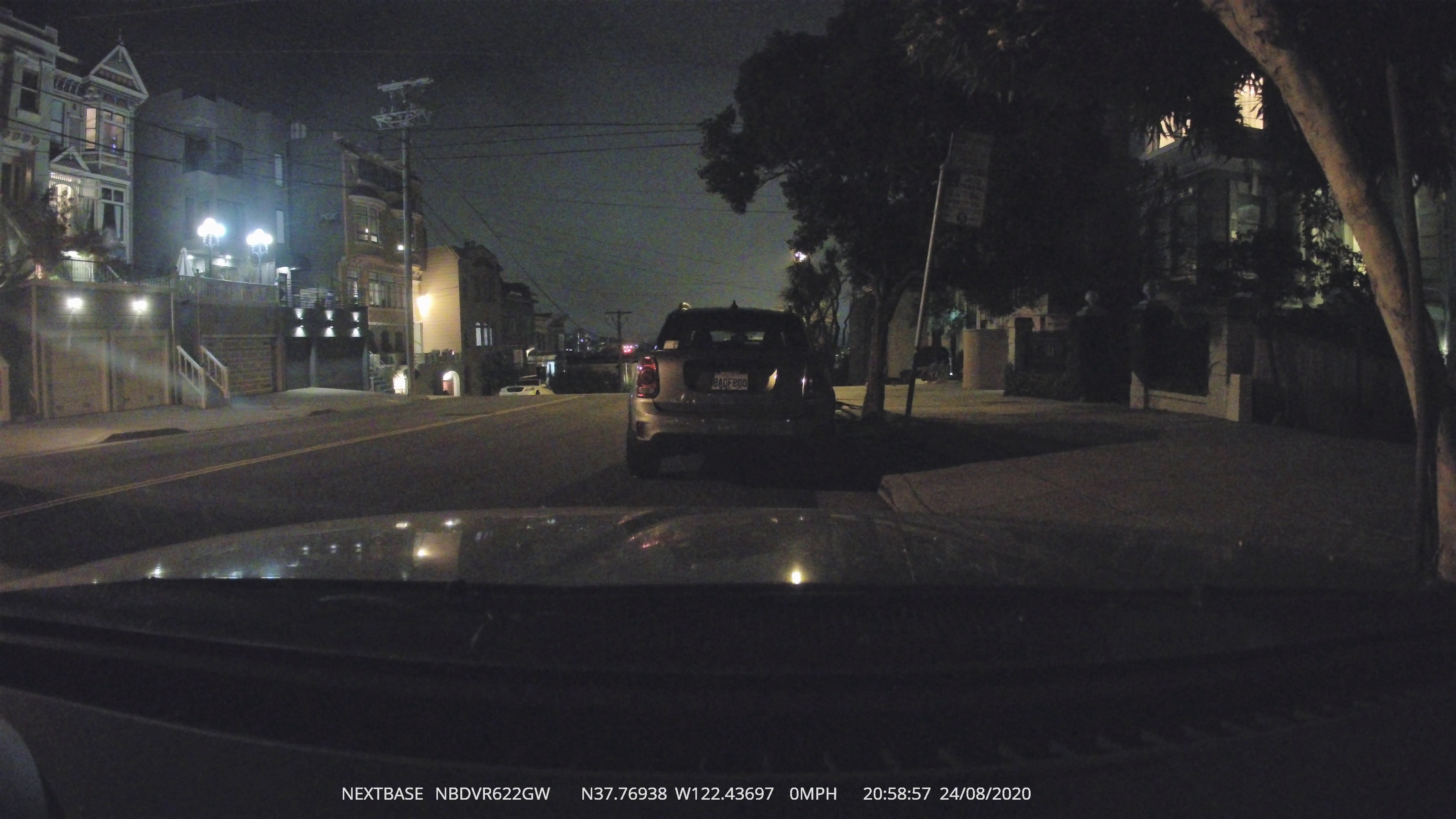 Below, you’ll see that the 622GW also greatly reduces headlight flare. It clamps down quickly, minimizes halos, while still capturing detail in the surrounding areas. It also releases back to low-light mode quickly. 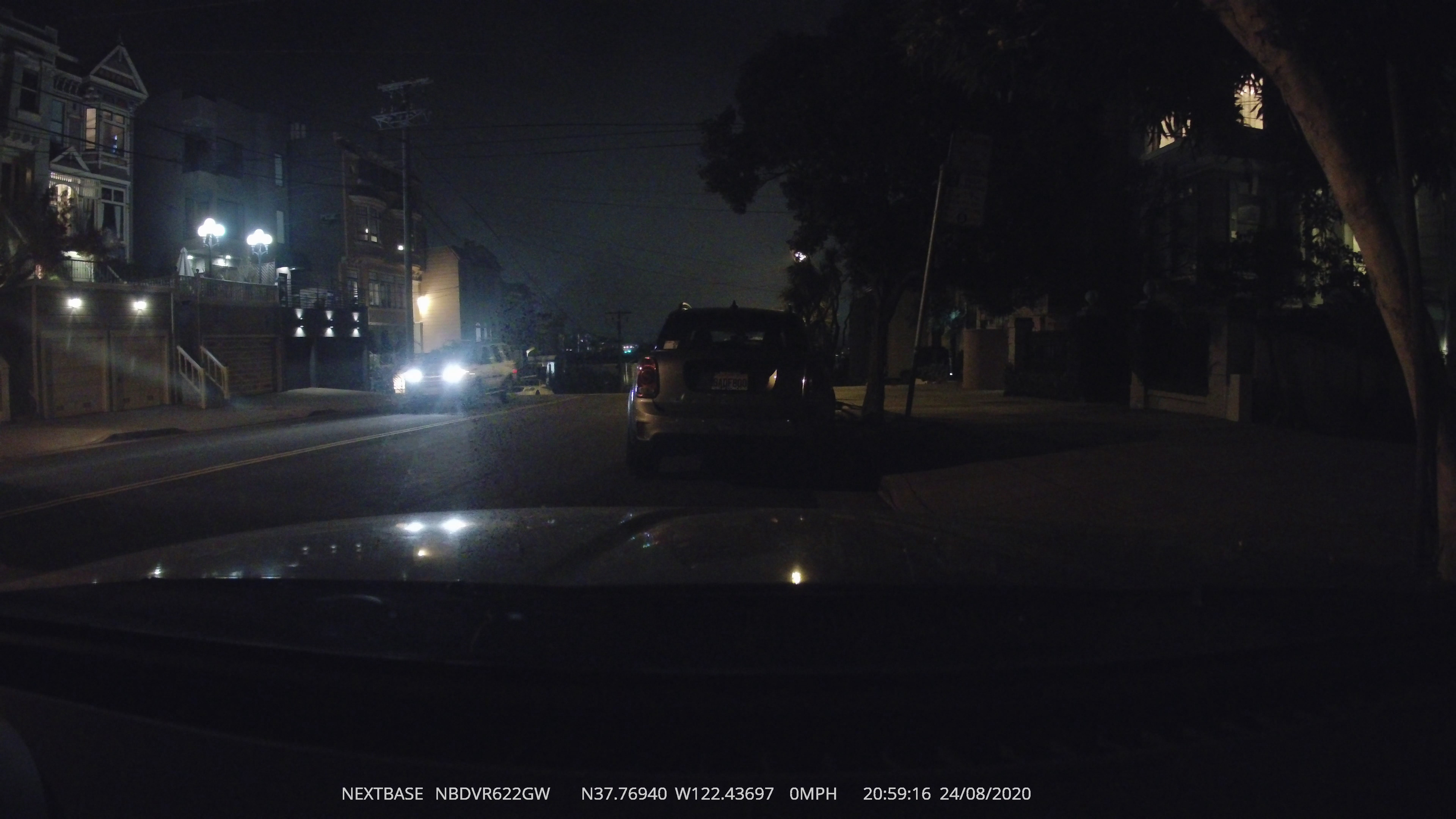 The 622GW’s sensor is an Omnivision OS08A10, which I’ve never seen before. I’m sure a large part of the credit for quality goes to this sensor, but Nextbase’s claims about tuning the quad-core processor inside have merit as well.

Operating temperatures for the 622GW are -22 to 140 degrees Fahrenheit. Nextbase was kind enough to point out that this is for the entire device, and not the chip temperatures that some vendors provide. I’d mention the vendors, but I’m still investigating the claim. Nextbase warranties the 622GW for one year.

If you want the best, this is it

I was absolutely delighted with the 622GW. It’s in a league of its own when it comes to captures, it’s a joy to configure and use, and the rear-facing modules make it the most versatile two-camera system on the market. If you want the best, this is it. You’ll pay a pretty penny, but it’s the best.

This camera comes closer to a 5-star rating than any dash cam we’ve reviewed. The 4K UHD captures are magnificent, especially the night video, which is far superior to the competition. Modular interior, rear, and telescopic rear cameras plus Alexa sweeten the deal. The bad news is the cost: $400 for the 622GW itself and $100 per rear module. But if you want the best, this is it.

Don't miss a deal at Mobiles
Best offers at Vimeo
Discounts, Sales and Deals at Ancestry
Save your money with Nike DE
Online-Shopping with Udemy
Best products at Argos
Latest Posts