The Manfrotto Digital Director is an intelligent shell that fits around the iPad Air 2, connecting it to your separate camera so you can utilise the tablet’s 9.7-inch screen to manage your workflow, plus manage your camera’s settings.
There’s no camera-fiddling required. But do you really need one and does it genuinely enhance workflow? We’ve been testing one out to find out.

The shell itself connects to the iPad via the Lightning socket and then to the camera via a standard USB cable rather than Wi-Fi.

It’s not just a glorified plastic case though. Powered by an A8 600MHz micro processor it means results on screen are instant rather than suffering any lag (we suspect that’s why there’s no Wi-Fi/Bluetooth connectivity too). That makes a huge difference in speeding-up workflow – especially when working with the real-time live-view monitoring that the device offers. 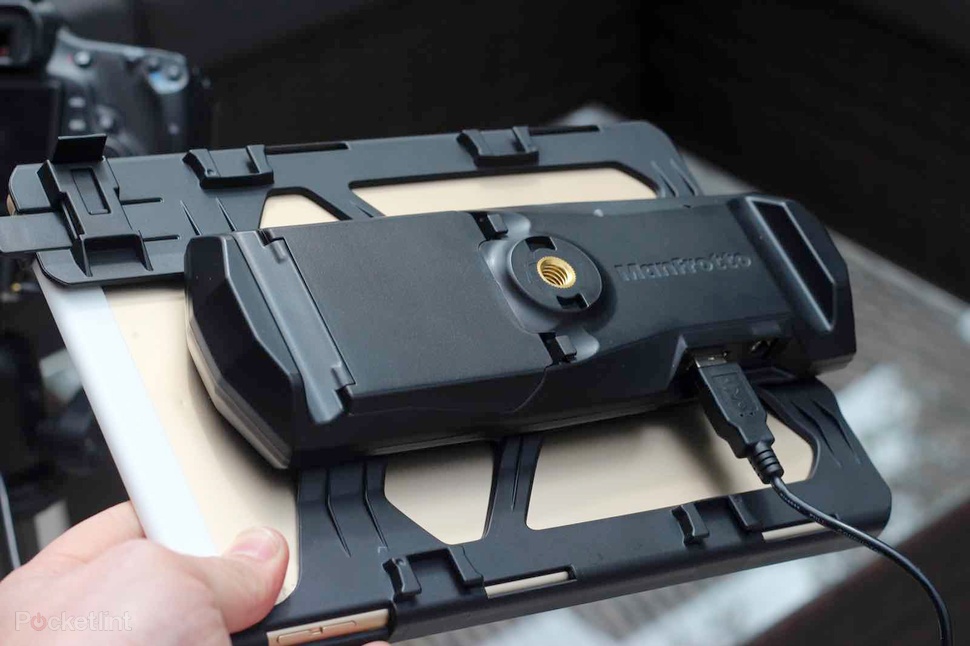 You will need a separate power supply for the Digital Director to work, though, but this can be either via a power adapter plugged into a wall socket, or if you are out of the studio then 4xAA batteries will do the job.

The Digital Director case features a standard 3/8″ tripod thread on the back, allowing you to attach it to a supported tripod (sold separately). We tested it with the new Manfrotto 190Go! Carbon Fibre tripod with ball head (£360) and a 244 Micro Arm Kit.

Because of the physical tether you’ll need a longer USB cable to position separate components farther apart. You can use a cable up to 10m long, for example, without experiencing a dip in responsiveness.

While the shell fits the iPad Air 2 perfectly, it also does mean you can’t use it with other iPads, such as the smaller iPad mini. Manfrotto says it plans to release “inserts” for different models in the future though, in particular to coincide with future iPad releases.

The Digital Director works with a number of leading models from Canon and Nikon, but not all of them. It doesn’t work with the lower-end Canon models, for example. Furthermore some features won’t work on all models, like sound monitoring with the Canon EOS 60D, for example, but Manfrotto says it is adding more cameras regularly. 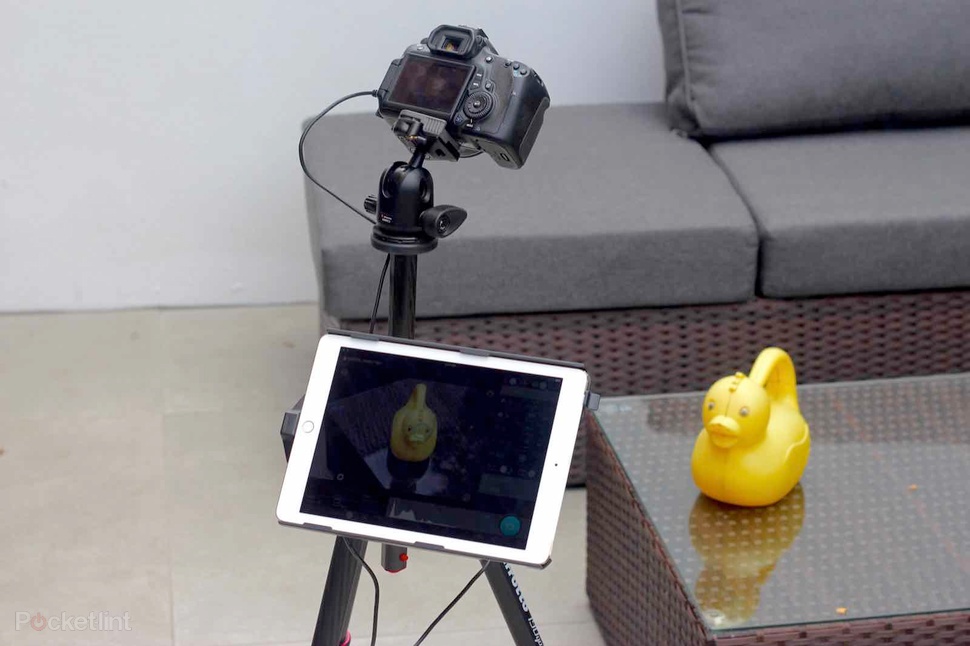 For the purpose of our hands-on review, we tested with a Canon 60D, which is our personal go-to camera for photos on the site. It worked instantly with zero setup hassle.

The dedicated Manfrotto app on iPad app allows you make adjustments to ISO, exposure, shutter speed, aperture, white balance, focus and more, all at the touch of a button. You to also dig deeper, with the likes of focus peaking, histogram and EXIF details also available. We also like the quick and easy intervalometer and time lapse options. 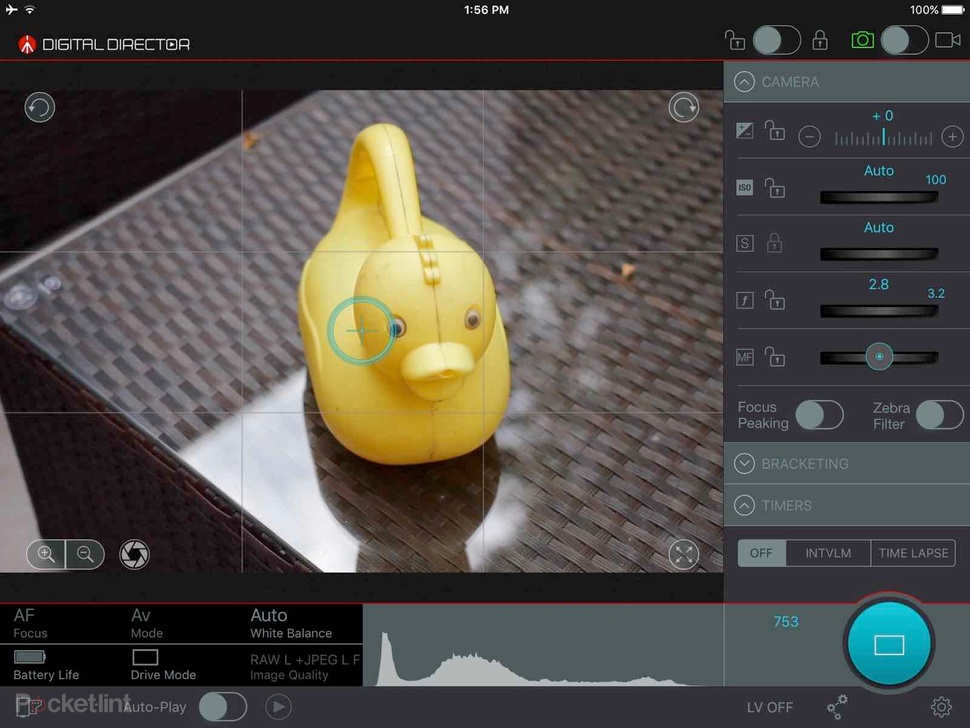 It’s essentially like having the rear display of your camera on a much larger display, so could be ideal for still life photographers fed-up of the restrictive small-scale, low(ish) resolution fixed-screens typical of cameras.

Slide the dials in the app and the camera responds instantly, while tapping on the iPad screen also instantly snaps the focus and there is a digital zoom feature that magnifies the selected focus point to ensure accurate focus.

Overall the interface is intuitive, easy to use, and the results are instant, making for an experience that feels as natural as using the camera itself. Albeit at larger scale and on a touch panel.

Digital Director also allows you to manage post-production activities from the iPad within the App, although this is fairly limited and it’s probably worth sticking to a more advanced photo editing app.

Those who do want to stick within the Manfrotto universe will be able to work on captured images by cropping and rotating, modifying exposure, contrast and brightness, as well as rating and finally saving your changes. You’ve been able to live save on to a laptop with apps like Lightroom for a long time, of course.

And because you’re wired-up to the iPad means you can share with ease too. Digital Director allows you to immediately share direct to FTP, by e-mail and on the usual social networks.

Digital Director is understandably a niche product, and a fairly pricey one at that, but if you already have an iPad Air 2, then this solution allows you to benefit from a bigger screen and touch controls.

It is worth noting that there are other options available – and more affordable ones at that. You could simply get a monitor to plug into your camera, opt to connect to your tablet via Wi-Fi and use the free dedicated Canon Camera Connect app, or look into other Wi-Fi enabled transfer devices.

What the Digital Director has going for it however, is its simplicity and the fact that out of the box it just works.

Don't miss a deal at Farfetch
Best offers at Groupon
Discounts, Sales and Deals at Vodafone UK
Save your money with H&R Block
Online-Shopping with Argos
Best products at Myprotein
Latest Posts