The Amazon Echo Dot has a small-enough footprint for most people, but it can be hard to disguise its power cord and unsightly wall-wart power supply. And if you want Alexa to control your lights, you’ll still need to connect that light source to a smart switch. Leviton’s Decora Smart Voice Dimmer with Amazon Alexa is essentially a zero-foot-print Echo and dimmer switch in one.

This isn’t an entirely new idea. Ecobee—the smart thermostat maker—came out with a similar product about 18 months ago. The Ecobee Switch+ also hosts an Amazon Echo smart speaker inside an in-wall device. The big difference is that Ecobee’s device is just a switch. It can’t dim a connected load. Leviton’s device can, and its “Off means off” feature ensures that the dimmer will work with LED bulbs that can be finicky when they’re in a socket controlled by a dimmer. Beyond that, Leviton’s companion app is much more sophisticated, especially if you have other Leviton Decora Smart Wi-Fi devices scattered throughout your house. I’ll go into detail about the app in a bit. 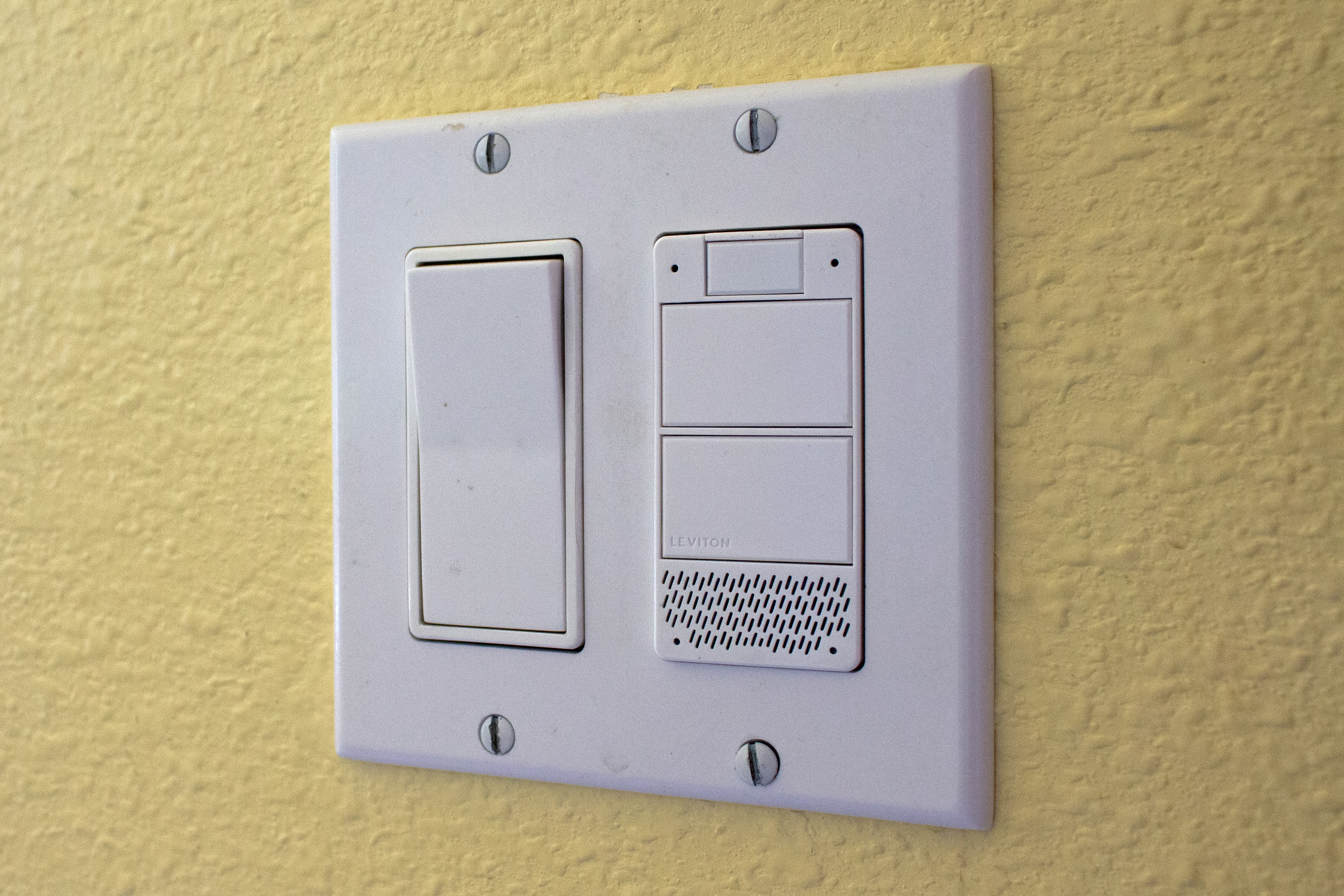 Leviton’s dimmer, on the other hand, is priced at about twice the current street price of Ecobee’s product. Another way to look at its $100 asking price is that it’s about the same as buying a third-generation Echo Dot ($60) and one of Leviton’s Decora Smart Wi-Fi dimmers (about $38). The advantage of Wi-Fi connectivity, of course, is that it eliminates the need for a smart home hub.

The downside is that if you’re using an older conventional router, versus a mesh router, you might encounter range issues. Additionally, this switch’s onboard Wi-Fi adapter is limited to operating on the 2.4GHz band, which could be a problem in environments where that spectrum is highly congested. Range wasn’t an issue for me, since I operate a Linksys Velop mesh router with three nodes, and my 2.4GHz airspace is relatively quiet.

But there were several occasions during the 10 days I was testing Leviton’s device that Alexa responded to the wake word by saying, “This device isn’t responding. Please check its network connection and power supply.” But then the Voice Dimmer would work as expected just a few minutes later. I quizzed Leviton’s product managers about it, and they said this wasn’t a known issue. I’ll leave the switch installed for a few more weeks and will update this review if it turns into a problem.

The Decora Smart Voice Wi-Fi Dimmer doesn’t look radically different than a normal dimmer, apart from the half-inch-wide status LED at the top, which is also a button. Push it once to summon Alexa without speaking the wake word. Press and hold the button down for a second or two and you’ll mute the microphones mounted on either side of it. The button glows a blueish green when Alexa is listening, flashes blue when she’s executing a command or answering a query, and glows red when the onboard mics are muted. 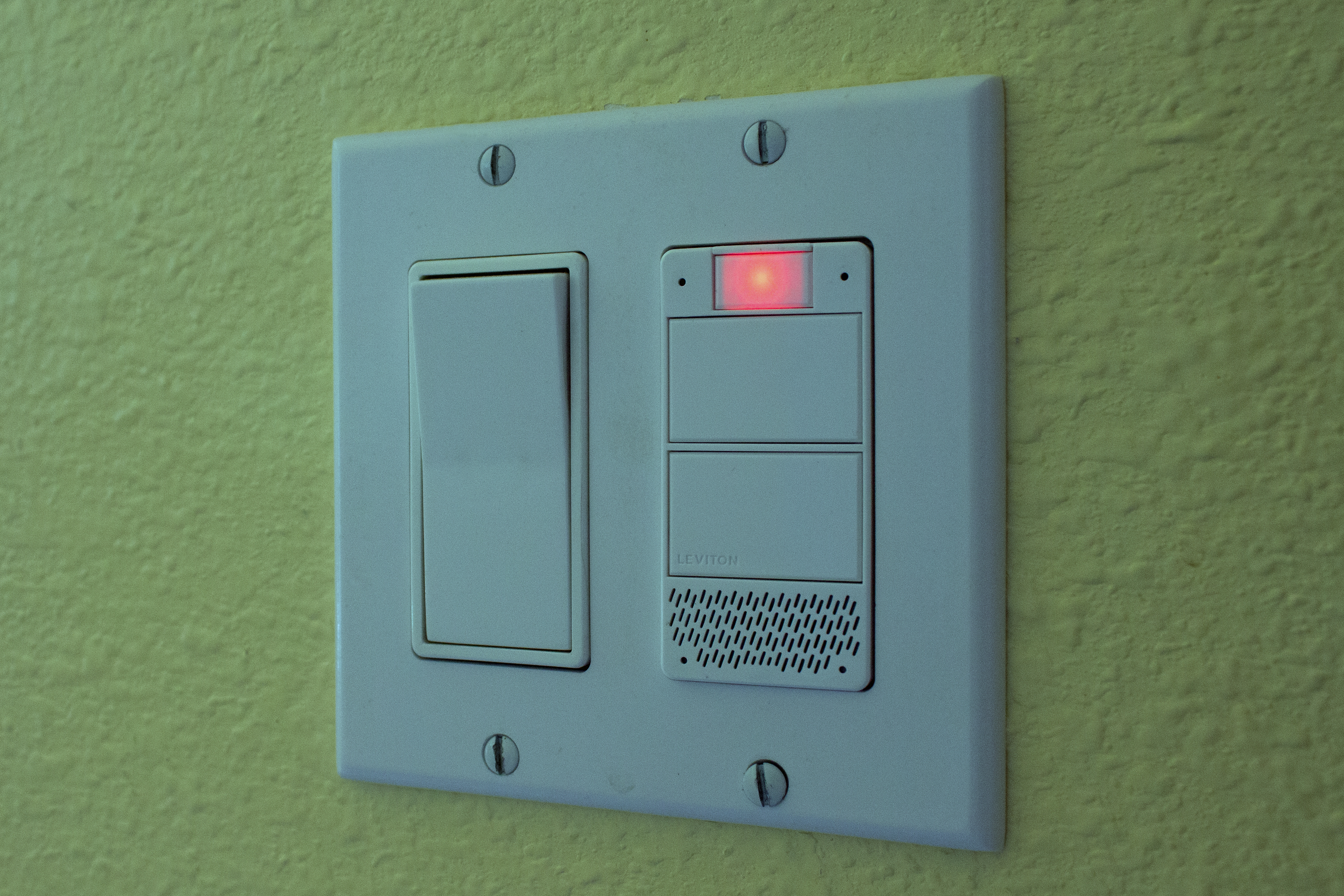 Two larger buttons are mounted beneath the LED. Press the top button to turn the light on, and the bottom one to turn the light off. Holding the lower button down dims the light, while doing the same with the top button increases the brightness. Turn the switch off while the light is dimmed, and the switch will remember that state the next time you turn it on (you can use the My Leviton app to change this behavior so that the on button sets the brightness level to a specified value, if you prefer). A second small LED embedded in the same quadrant as the speaker glows green when the switch is off, to help you locate the switch in the dark (here again, you can program this LED with a different behavior in the My Leviton app).

Alexa on the Voice Dimmer operates almost exactly as it does on any Echo-compatible smart speaker, answering to the wake word, lighting up an LED when she’s listening, performing commands and answering queries, reading flash briefings and weather forecasts on demand, and playing music. Whisper mode, however, is an Alexa feature that Amazon reserves for first-party products. It’s enabled on my Alexa account, but Alexa responds at full volume on Leviton’s and other third-party devices. 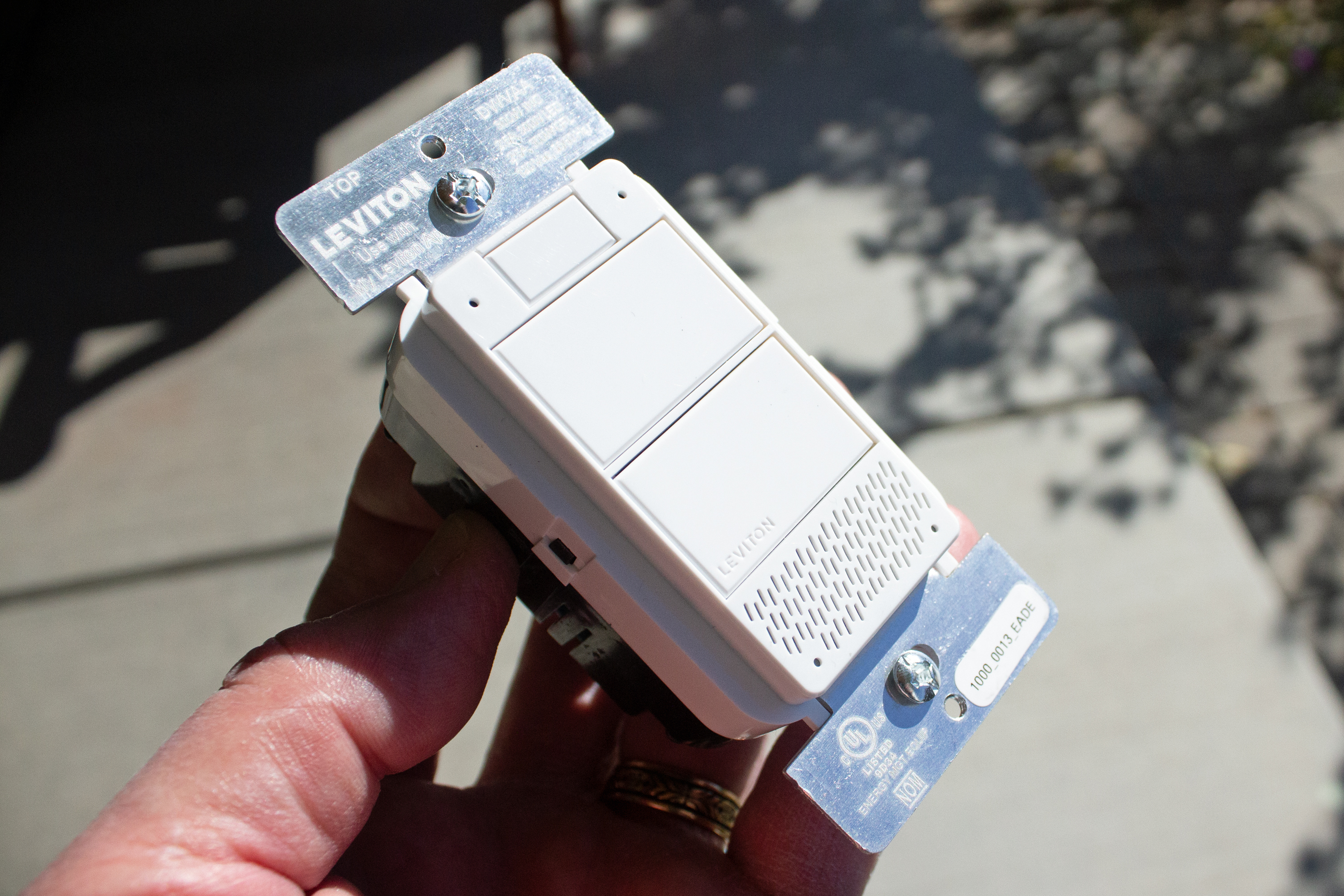 Listening to music on Leviton’s Voice Dimmer, meanwhile, is not an experience I’d recommend. It doesn’t have an aux line out, of course, nor can you pair a Bluetooth speaker to it (at least not yet. Leviton’s product managers hinted this feature might be enabled down the road). The dimmer itself is outfitted with a very small speaker, and it sounds just as tinny—reminiscent of the pocket AM transistor radios of yore—as you would expect. Leviton tells me it “partnered with a major audio brand” on the speaker’s design, but my contact declined to provide any other information about the switch’s audio capabilities. My advice: Use Alexa on Leviton’s Voice Dimmer to stream music to a separate Wi-Fi-networked speaker. 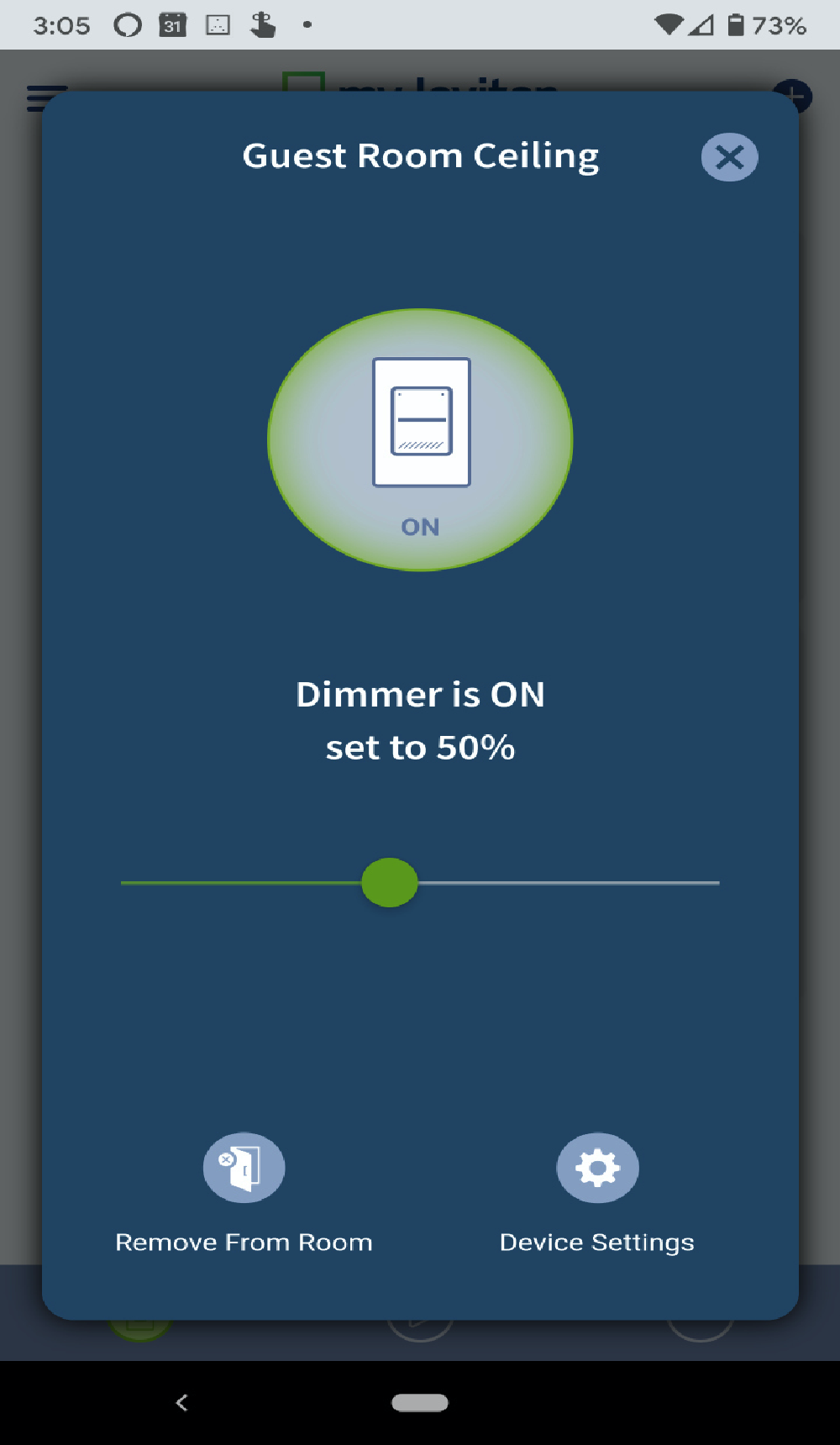 The only other issue I encountered summoning Alexa on the Voice Dimmer was having the various Echoes in my home fighting over which was going to answer when I said, “Alexa.” I installed Leviton’s product in a guest bedroom, which is around a corner and down a 9-foot hallway from my kitchen, where I have an Amazon Echo Show on a breakfast bar. On more than a few occasions, the Voice Dimmer tried to commandeer conversations I initiated with the Echo Show.

A few days into my review, Alexa on the Voice Dimmer followed one of her responses with something to the effect of, “By the way, I’m trying to answer from the correct location. Did I get it right?” That’s not a verbatim quote, but it shows that Amazon’s algorithms are actively learning and adapting.

More importantly, I didn’t have any trouble summoning Alexa on the Voice Dimmer while I was in the guest room. I was able to use voice commands to control the light on the ceiling in the room (the direct load), a Philips Hue bulb in a lamp on the bedside table, and an IKEA Symfonisk speaker on the dresser—even while speaking to the dimmer from 10 feet away.

You won’t be able to install the Decora Smart Voice Dimmer if there’s no neutral wire in the junction box where you decide to mount it. And if you’re installing it on a three-way circuit, you’ll need a companion switch at each of the other legs of the circuit. That would be Leviton’s Decora Digital DD00R for remote dimming, or its Decora Digital DD0SR for remote switching. Either of those will add about $20 to the cost of your deployment.

The Smart Voice Dimmer eschews the backstab connections that are more typical of Leviton products in favor of pigtails and wire nuts, which I suppose are easier for DIYers to deal with, since the wires are color coded. There are wires for line, load, ground, and neutral, plus a traveler wire that will be left unconnected in a single-pole installation. The downside to pigtails, I’ve found, is that they (and the nuts securing them to the house wiring) can be difficult to stuff back into the junction box, especially when the new switch is oversized, as smart switches like this one tend to be. Fortunately, I didn’t have all that much trouble with this installation, even though the new switch shares the box with a (dumb) ceiling fan controller. 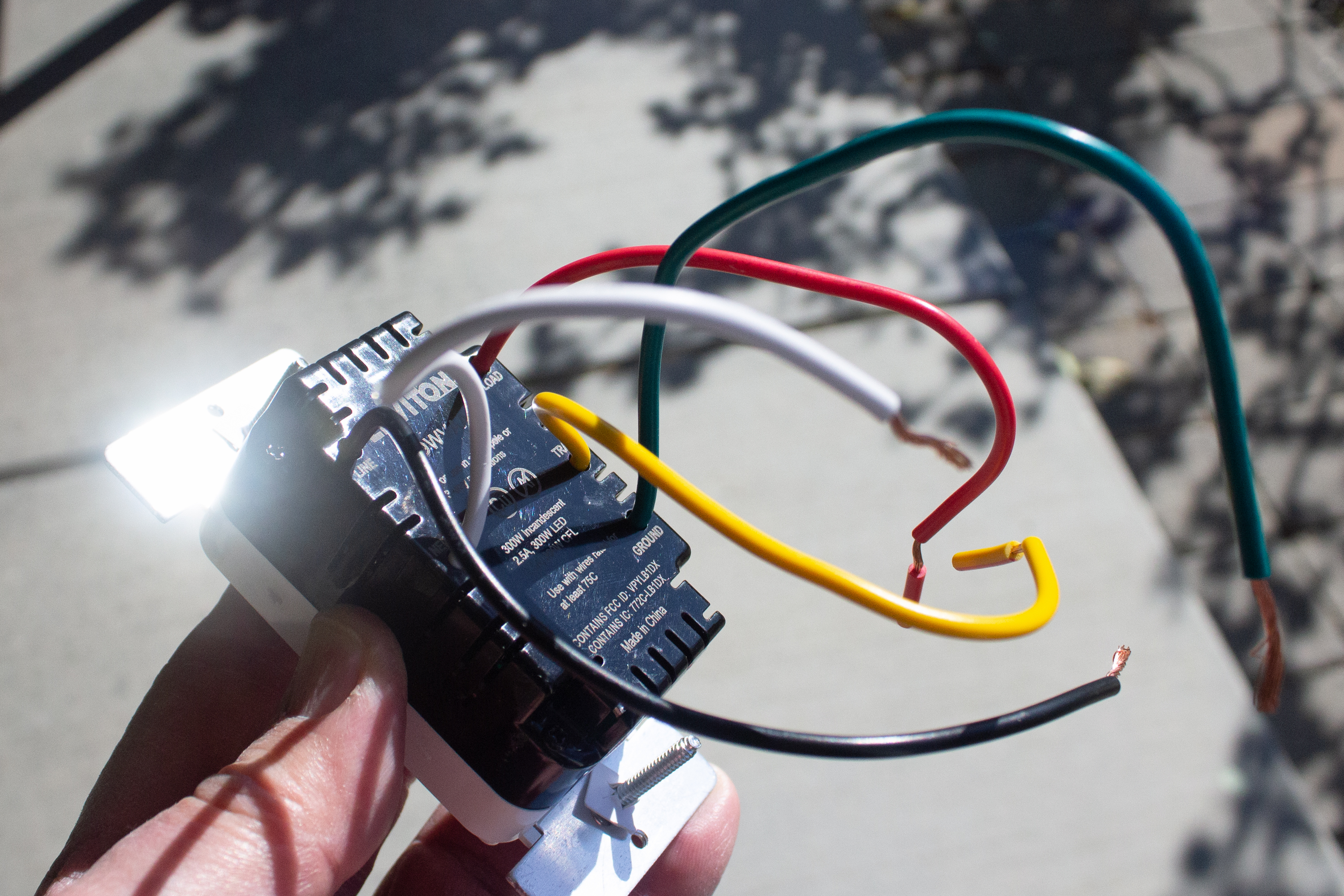 Leviton provides a slick matching snap-on polycarbonate cover plate that hides the screws securing the plate to the switch, but I couldn’t use it because I put the switch in a two-gang box and Leviton puts only single-gang plates in the box with the switch. If you like the look, Leviton sells these separately in up to six-gang configurations (search for “Decora Plus Screwless Wallplate”).

The My Leviton app

Once the Voice Dimmer is wired up and you’ve restored power at your breaker box, the next step is to download and install the My Leviton app and establish a temporary Bluetooth connection between your phone and the dimmer. Once you have that, the app will discover and display local Wi-Fi networks. Choose yours, provide the password, and the dimmer will move over from Bluetooth control to your home network.

The My Leviton app, available for Android and iOS, has come a long way since we first encountered it. If you’re of a mind to, you can really get into the weeds here, tweaking just about every facet of the Voice Dimmer, ranging from how its LED indicator behaves (always off, only on when the light is switched on, or only on when the light is switched off) to the rate at which the controlled light brightens when it’s switched on and dims when it’s switched off (ranging from instant on/off to fading up or down over as long as a 25-second span). You can also set minimum and maximum brightness levels, have the light return to a specified level after it’s turned off or to the brightness level it was at when it was turned off, and you can program the light to automatically shut off in timed increments ranging from one minute to 12 hours. 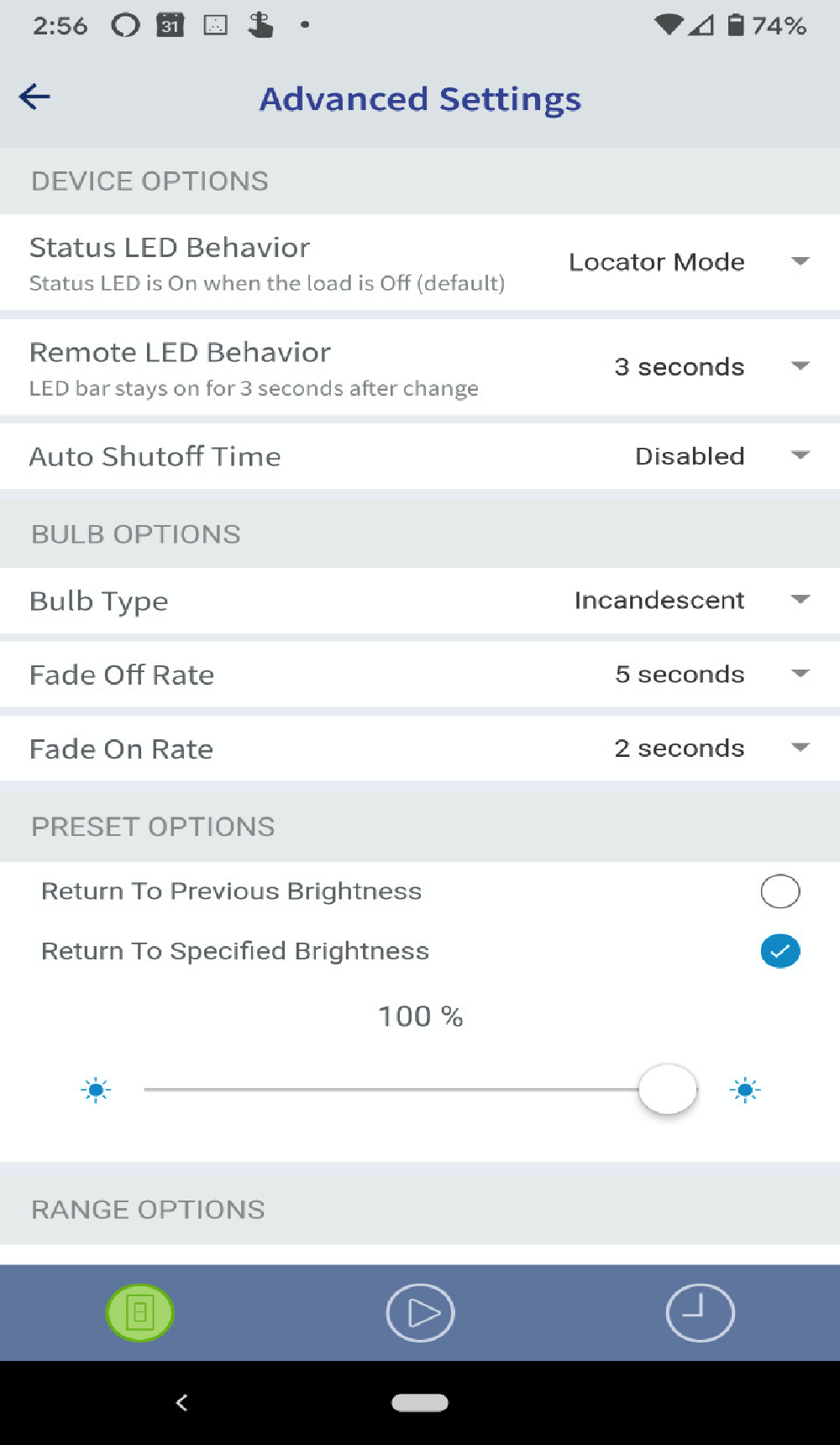 Using the app lets you group all your Leviton Decora Smart devices into rooms for easier management (you can create rules that control all the devices in a room), but you’re free to program sequences of events (Leviton calls them “activities”) controlling mixtures of devices and rooms, so they automatically execute based on schedules and/or geofencing triggers. In the latter scenario, for instance, you could create an activity that automatically turns lights on and off when you leave your home at night to give the impression that the house is still occupied, and turn on certain lights—say, the front porch and the overhead light in the garage—when you return home again.

This would of course depend on your installing Decora Smart Switches at every light you wish to control. But you wouldn’t necessarily need pricey Voice Dimmers all over the house to do that. You could deploy the much-less expensive Decora Smart Wi-Fi In-Wall Dimmer (model DW6HD-1BZ) or its In-Wall Switch (model DW15S-1BZ), both of which cost about $38. Don’t forget to budget for the cost of companion switches or dimmers for any three-way circuits you might have.

In addition to having Alexa onboard, Leviton’s Voice Dimmer works with Google Assistant and IFTTT, which opens lots of avenues for integration with other smart home devices. Even if you have nothing more than Amazon’s Alexa app, you’ll find lots of ways to group disparate smart home products so they can be controlled at the same time.

Leviton doesn’t manufacture motorized shades, for example, but you can use the Alexa app to set a routine that closes Lutron’s Serena shade when you turn off the light controlled by Leviton’s Voice Dimmer. On the other hand, of course, you could also just buy Lutron Caséta lighting controls and control everything with Lutron’s app. There is currently no HomeKit support, however, so folks who’ve hitched their smart home wagon to Apple’s technology won’t be interested in this product.

I’d like to see Leviton enable whisper mode on the Voice Dimmer, and I will keep a close eye on the dimmer’s network connectivity to see if that is a recurring problem (and I will lower my bottom-line score if it is). Apart from those shortcomings, the Decora Smart Voice Wi-Fi Dimmer with Alexa is a very good solution for anyone looking for a zero-footprint smart speaker that can control lights along with other smart home devices, including speakers.

Don't miss a deal at Boohoo
Best offers at Sephora
Discounts, Sales and Deals at Turbo Tax
Save your money with EE Mobile
Online-Shopping with House of Fraser
Best products at O2 Mobile
Latest Posts