The ThinkPad name has a long and respected tradition for providing quality laptops that can withstand almost anything life has to throw at them. Now this vaunted name appears on a Chromebook. So, does this Google-flavoured newcomer retain the ideals of its forebears? Here’s our review.

There are two variants of the ThinkPad 13 Chromebook currently available on the Lenovo website. The entry level model, which we’re reviewing, costs £379.99 from Lenovo, or you can opt for the premium model (part number 20GL0003UK) that adds an Intel Core i3 processor and a full HD, IPS touchscreen, although that will set you back £479.99.

The latter is the only model sold in the US via Lenovo’s website and it costs $549.

Unlike other ThinkPads, which you can often configure to suit your needs, these models offer no way to upgrade individual components at the checkout. Removing the back panel also reveals that pretty much nothing inside can be changed once you’ve bought the machine, so choose the spec that will meet your needs for the full life of the device.

The prices might seem a little high for the usual Chromebook market, but this is an unfortunate trend that has occurred recently due in part to the drop in value of the pound. Where many models used to be around £200, it seems now that you’ll be spending a bit more for a modern one.

Those familiar with ThinkPads will immediately recognise the classic black livery that has adorned the family of devices for many years now. Of course, there’s also the ThinkPad logo which gives things away. The latter does come replete with a glowing red LED in the dot above the ‘i’, and we think it looks pretty snazzy. 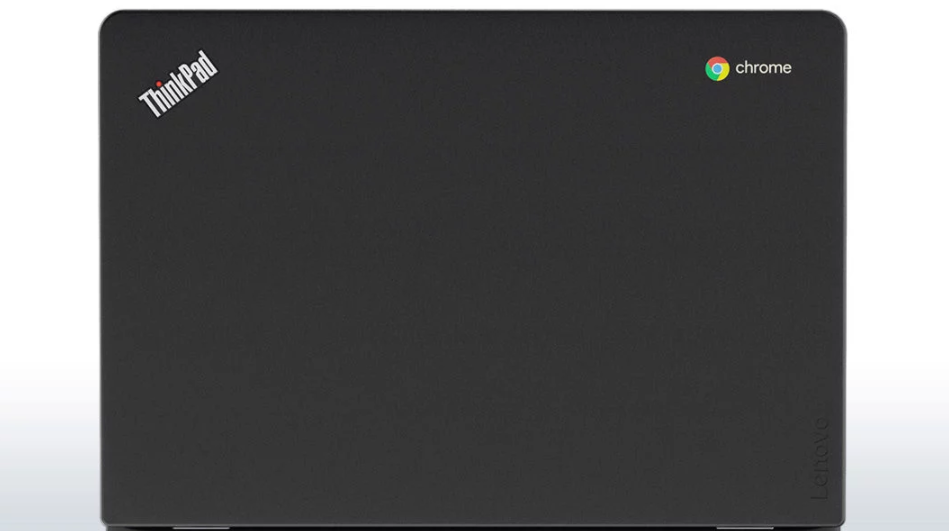 The chassis has gone through the twelve military-grade tests that earn it the right to wear the ThinkPad badge. This means that, according to Lenovo, it should survive temperatures of -20 degrees celsius, a 6-hour dust storm, and explosive atmospheres!

Now, our dust storm generator was being repaired while writing this review, so we were unable to test these claims, but we’re quite sure that it should emerge unscathed from being knocked off the table at Costa. 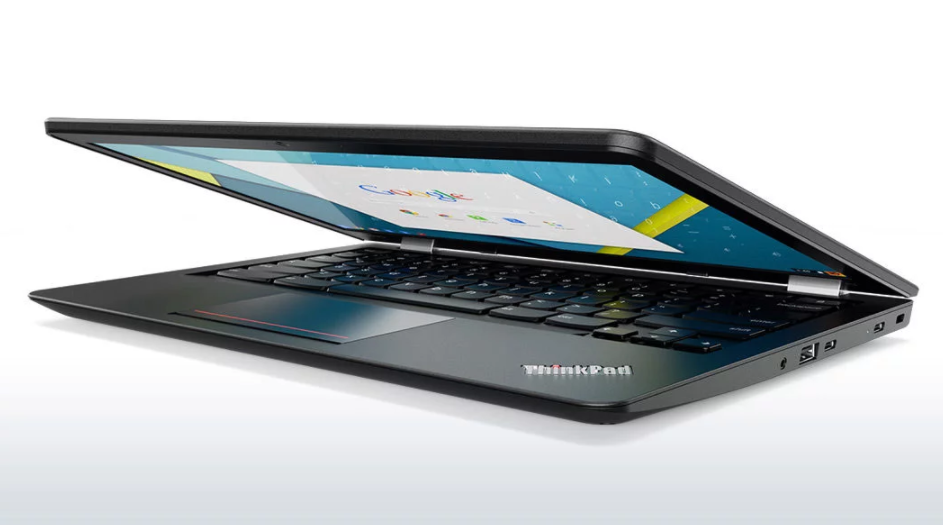 Two silver hinges suggest that this might be a yoga-style design, but alas the display can only be opened up to 180 degrees, allowing the screen to be flat on a table but not to stand up in a tent mode.

Vents on the left flank show that this model comes with a fan inside, which is becoming increasingly unusual in this class. That being said, Chromebooks don’t tend to run too hot, and we didn’t really hear it kick in during testing.

Sadly, something else we barely heard were the speakers. The downward facing units, fitted on the underside of the chassis, are quite poor. Audio quality is tinny and brittle at best. Yes, it can be loud, but rarely does it sound good.

Thankfully there’s an impressive collection of ports available. The left flank bears a USB 3.0 slot, alongside a full SD card aperture. On the right you’ll find another USB 3.0, plus two USB-C openings, either of which can be used to charge the device. A 3.5mm headphone jack and Kensington lock make up the rest of the ports. 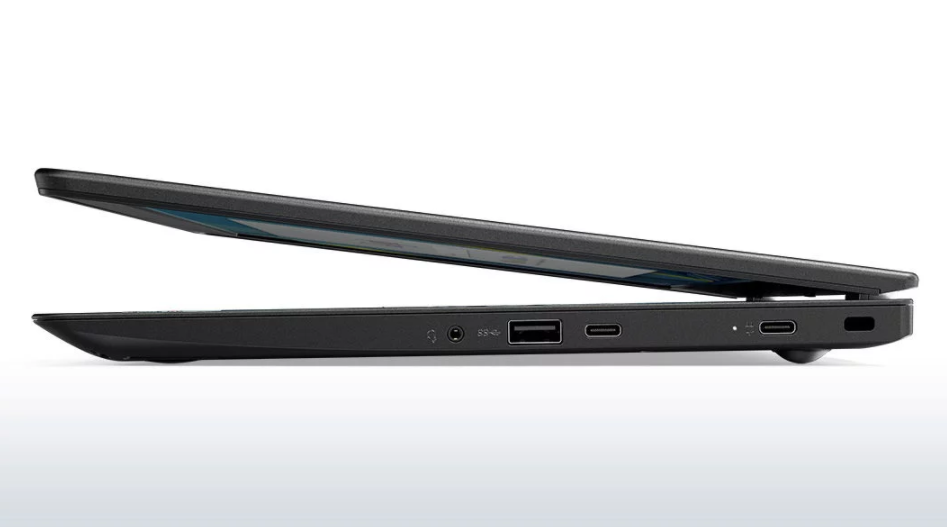 As the name suggest, this model contains a 13.3in display. Our test machine employs the cheaper TN panel running at a 1366 x 768 resolution. It’s standard fare on Chromebooks, but in these days of iPads and smartphones with pin-sharp displays, it does feel somewhat lacking.

The matt finish ensures that glare isn’t a problem, but restricted off-angle viewing, pale colour representations, and a maximum brightness level of 200 nits, means this a functional rather than enjoyable screen to use. 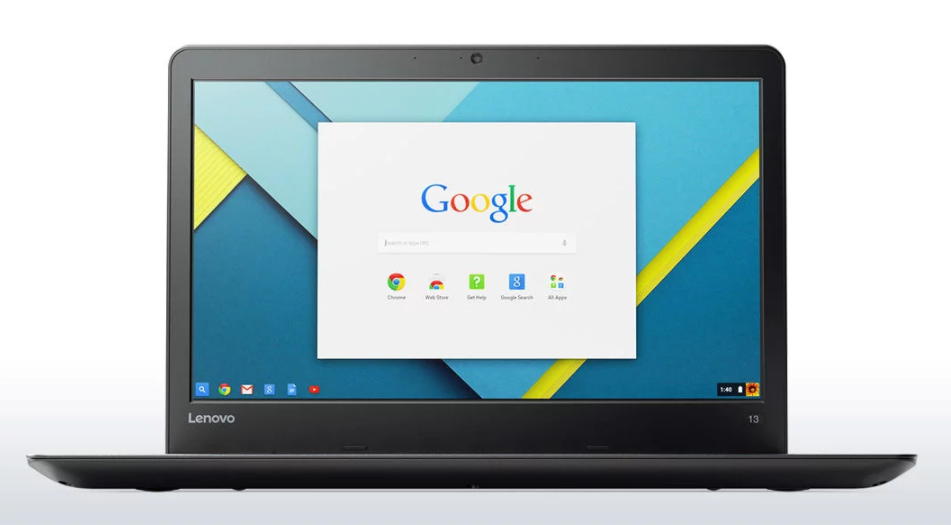 Those wanting a better experience could move up to the premium model with a full HD (1920×1080) resolution and brighter IPS display. This is also a touchscreen, which is the best choice if you want to also use Android apps on your Chromebook.

Keyboards are often surprisingly good on Chromebooks, and the ThinkPad 13 comes from a lineage where this area has always been a strongpoint. This combination delivers an excellent typing experience, with the chiclet style keys feeling responsive under the fingers. 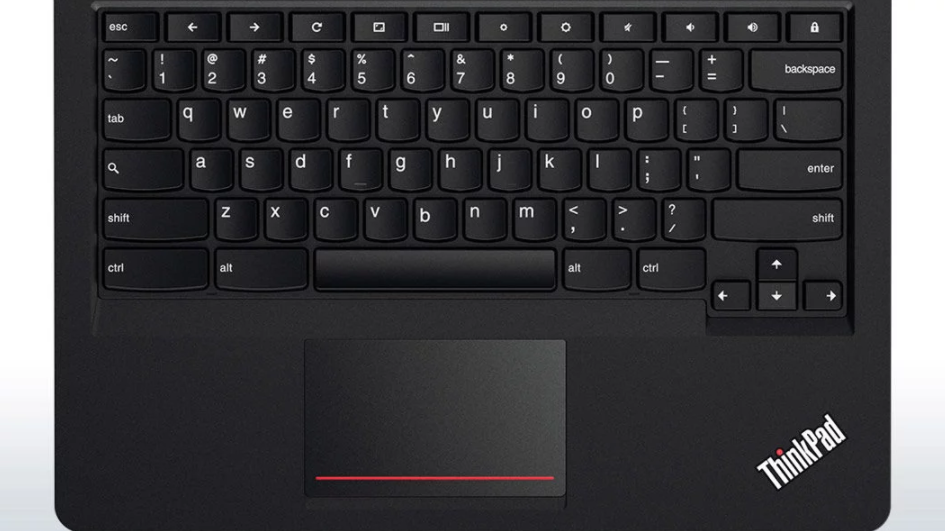 There’s no ultra-slim travel like you’ll find on the MacBook and its ilk (thank God!), instead each key feels like it’s actually been pressed, and then returns dutifully to its original position. In no time at all we were up to full speed, with errors down to our scruffy technique and pudgy fingers rather than questionable design aesthetics.

The only real downside is that there’s no backlighting, so late-night typing will need a lamp. One thing to note though: ThinkPad purists will be horrified to see that the red TrackPoint nub is absent from this device.

What you do get is a well-sized, buttonless trackpad. On our test unit we did find there was a little more play in the fitting than we’d have liked, but in everyday use it was perfectly acceptable, and the various multi-touch gestures in ChromeOS were all executed without fuss or fanfare.

Under the hood Lenovo has opted for an Intel Celeron-3855U from the Skylake generation. This isn’t exactly the fastest silicon around, but Chromebooks are designed to work on lower-level hardware, and the Celeron seemed to happily cope with multiple tabs open, videos playing in the background, all while navigating image heavy websites.

Running the ThinkPad Chromebook 13 through a few benchmark tests returned respectable scores of 93.144 in Jetstream 1.1 and 263.91 in Basemark 3. Not quite in the upper strata occupied by the likes of the Asus C302CA, but decent nonetheless.

4GB of RAM no doubt helps proceedings, while the 16GB of eMMC storage is on hand for downloaded files or any of the range of Android apps ChromeOS now supports.

In our battery test, where we streamed a HD video with the display set at around 75 percent brightness, the ThinkPad 13 lasted a very respectable seven hours and forty minutes. This of course would be extended by replacing the Netflix binge with more productive activities such as perusing the internet and writing documents.

From humble beginnings, ChromeOS has grown into a fully usable platform for productivity, entertainment, and general computing. Many of the apps can now be used offline, and the recent addition of Android apps greatly expands the possibilities. 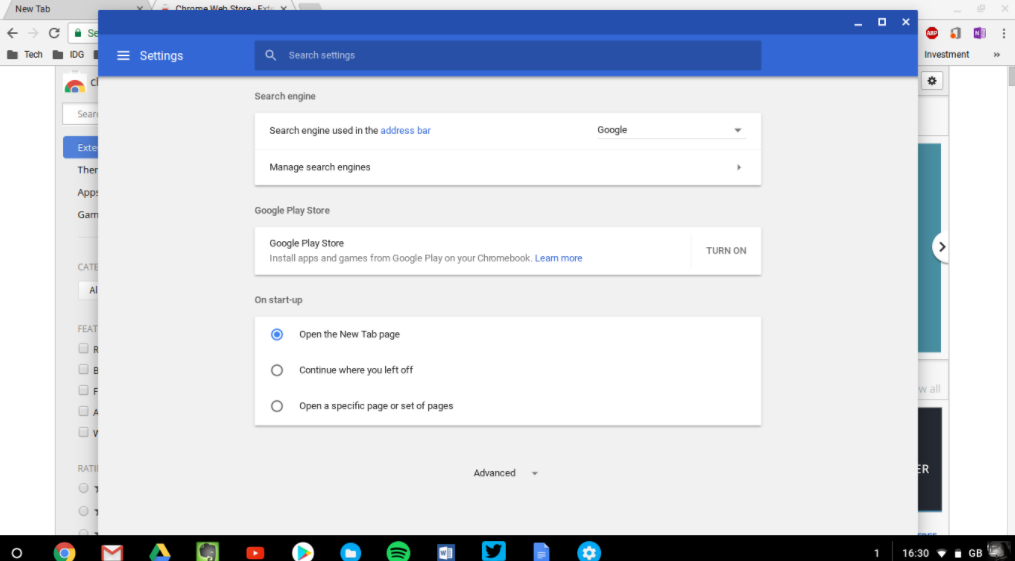 It’s here though that the lack of a touchscreen does hamper the ThinkPad. While it’s capable of running Android apps, very few of them are intended to be used with trackpads. This results in an often awkward user experience, rather than the fluid one offered on touch enabled devices.

Android on Chromebooks is a relatively new feature, and as such there are still some kinks to iron out. Several apps could only be opened in portrait mode, and a few had patchy performance. We fully expect this to be addressed in the coming months, and if so, then ChromeOS could well become a genuinely powerful operating system that will have Windows and iOS looking over their shoulders.

SHOULD I BUY LENOVO THINKPAD 13 CHROMEBOOK?

A year or two ago this would have been a strong contender for the best Chromebook around. But, with the likes of the Asus C302CA and C213NA offering (respectively) premium build and rugged performance, the ThinkPad 13 Chromebook has a harder fight on its hands.

The excellent keyboard, solid battery life, varied port selection, and robust build quality are very nice to have, but these advantages are offset by poor speakers, a wobbly trackpad and an average display. Omitting a touchscreen also means that the unit struggles to get the most out of the compatible Android apps it can run.

It’s a decent device, but at this price we’d definitely recommend trying out some of the competitors before you make a purchase.

0 0 0
Previous ArticleGoogle Bets $1.1 Billion More Brains Can Help Take On Apple
Next ArticleUber Drivers Told How to Spot Traffickers in Their Cabs
Comments (0)

Don't miss a deal at Myprotein
Best offers at Go Daddy
Discounts, Sales and Deals at Adobe
Save your money with Argos
Online-Shopping with Bodybuilding
Best products at Microsoft Store
Latest Posts