Lenovo’s Smart Display delivers all the smarts of the Google Home Hub, but it’s too pricey to recommend over its rival

The Lenovo Smart Display is, to all intents and purposes, a large Google Home Hub. Powered by Google Assistant, it runs the same software as the smaller Google-branded smart screen and you can use it in all the same ways. Ask it questions, search for recipes, play YouTube videos, radio stations and Spotify playlists – you name it, it can do it.

Available in 8in and 10in variants, you also get more screen real estate than on the smaller 7in Google Home Hub but it’s more expensive, costing £180 and £230 in the two different sizes, respectively.

Lenovo Smart Display (10in) review: What you need to know

The other benefit the Lenovo Smart Display brings is a front-facing camera. This lets you have proper, two-way video conversations via Google Duo, which you can’t do with the Google Home Hub. You can also rotate the Smart Display by 90 degrees during video calls so the recipient’s face fills the screen although for now, the rest of the UI doesn’t support portrait mode, so if you do, you’ll have to turn it back once you’ve finished a call. 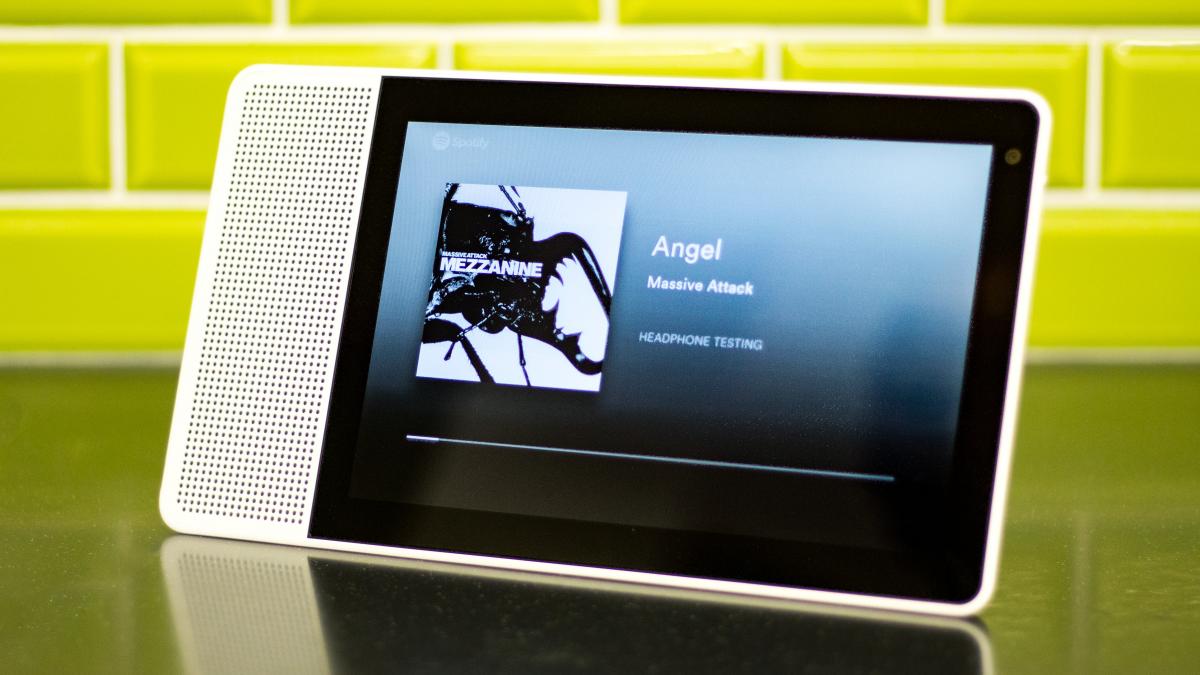 The only other differences relate to the Lenovo device’s larger physical size. Indeed, in both the 8in and 10in variants, there’s a full-range speaker and two front-facing tweeters. The larger, 10in Lenovo Smart Display also has a higher resolution display, at 1,920 x 1,200, than the Home Hub, which has a 1,280 x 800 panel.

Otherwise, there’s very little to split the Smart Display from the Google Home Hub in terms of features. Setup is via the Google Home app, which can be installed on both iOS and Android devices and it has the same Home View as Google’s smart screen, which lets you manage all your home’s smart devices from one place. Like the Home Hub, it also doubles up as a digital photo frame when not in use.

If it wasn’t obvious enough already, the Lenovo Smart Display’s main competition comes from the Google Home Hub. At £139 (down to £109 on a special deal at the moment), Google’s own smart speaker is a veritable bargain – it’s around £40 cheaper than the 8in Smart Display (£180) and £90 cheaper than the larger 10in model (£230).

Although it uses Alexa rather than Google Assistant, the Lenovo Smart Display’s other main rival is the 2nd-gen Amazon Echo Show. Now just £170, Amazon’s smart display also has a 10in display and much better sound quality than the larger Lenovo Smart Display. The only significant caveat is that its screen has a lower 1,280 x 800 resolution – the same as the Home Hub and 8in Smart Display.

The Lenovo Smart Display is an altogether different looking beast to its rivals from Google and Amazon, too. I was sent the larger 10in model and my overwhelming first impression was how much bigger it is than its Google-branded counterpart. Sure, you’re getting 3in more screen real estate but it’s a considerable 132mm wider and 69mm deeper than the Google Home Hub.

The latter of those dimensions is perhaps a little misleading because the Lenovo Smart Display is thickest at its left side and tapers to only 13mm deep at its narrowest point. However, the substantial extra width can be attributed to the the Smart Display using two front-facing tweeters behind a grille to the left of its display. The result is a much larger footprint that’s better suited to a kitchen counter or dressing table than bedside table – and even then you might find it a little bulky. 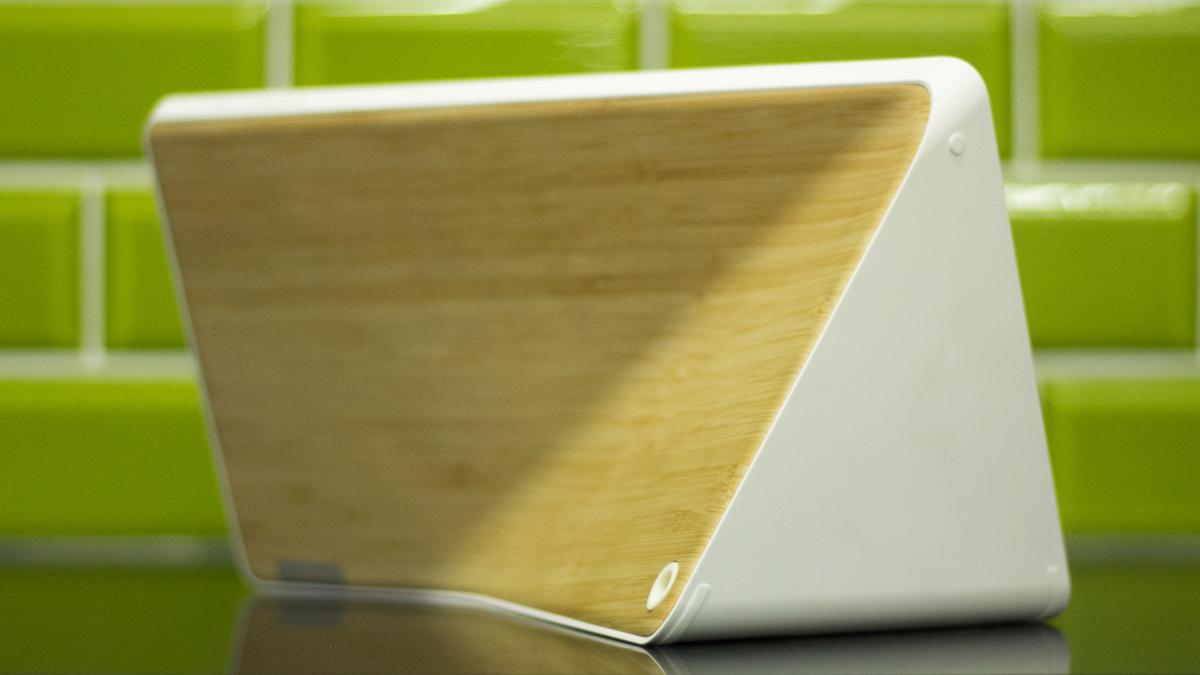 Another striking feature of the Lenovo Smart Display is the curved, bamboo panelling at the rear. You only find this on the larger 10in model and, combined with its white plastic front it helps create a design that’s certainly a lot more sophisticated than any of its rivals although it’s a shame the most visually appealing part of the speaker is at the rear where you’ll rarely see it.

Thankfully, though, the screen is the device’s real strong point. With a resolution of 1,920 x 1,200, the 10in panel offers heaps of detail. As such, photos and video look brilliant on the Lenovo Smart Display and all things visual, from recipes to YouTube videos, benefit substantially from the extra 3in of screen real estate. Although there’s an auto-brightness setting, however, the Lenovo Smart Display doesn’t have the Home Hub’s Ambient IQ feature. This means the display will dim when it gets darker but the white balance won’t change to match your surroundings.

There’s also its 5-megapixel, wide-angle, front-facing camera, which is the main practical distinguishing feature from the Google Home Hub. Crucially, this means when you make a video call via Duo, the recipient can see you, which is a nice touch if you’re the sort of person that regularly makes video calls with precariously balanced laptop or tablet. Quality is good and solid, although not quite up to the level of Apple’s iSight cameras on its MacBook laptops. And privacy isn’t a problem, either, because there’s a handy mechanical switch you can use to shield the lens when it’s not in use.

Lenovo Smart Display (10in) review: What does it do?

The Lenovo Smart Display works in more or less identical fashion to the Google Home Hub. Setup is quick and easy via the Google Home app for Android and iPhone, and once it’s up and running, you’ll see the same straightforward interface comprising weather info and upcoming events along with recommendations from Spotify and YouTube and “Top stories for you”.

Swiping down from the top of the screen opens Home View, which lets you control your lights, media, thermostat and cameras all from one place. Since it’s powered by Google Assistant, the Lenovo Smart Display works with all the most popular smart home brands including Philips Hue, Hive, Ikea Tradfri, Nest and TP-Link. Naturally, it’ll also work with Google’s own streaming devices such as the Chromecast, Chromecast Audio and Chromecast Ultra.

Other settings are available with a swipe up on the screen. Here you can change the display’s brightness, manually set an alarm or set the volume.

Like the Home Hub, however, most of what happens on the device’s screen only appears after you’ve given a verbal command. You can search for recipes and follow their step-by-step instructions on screen, for example, and the Smart Display will also show calculations, countdown timers, translations and to-do lists when you give the relevant instruction. 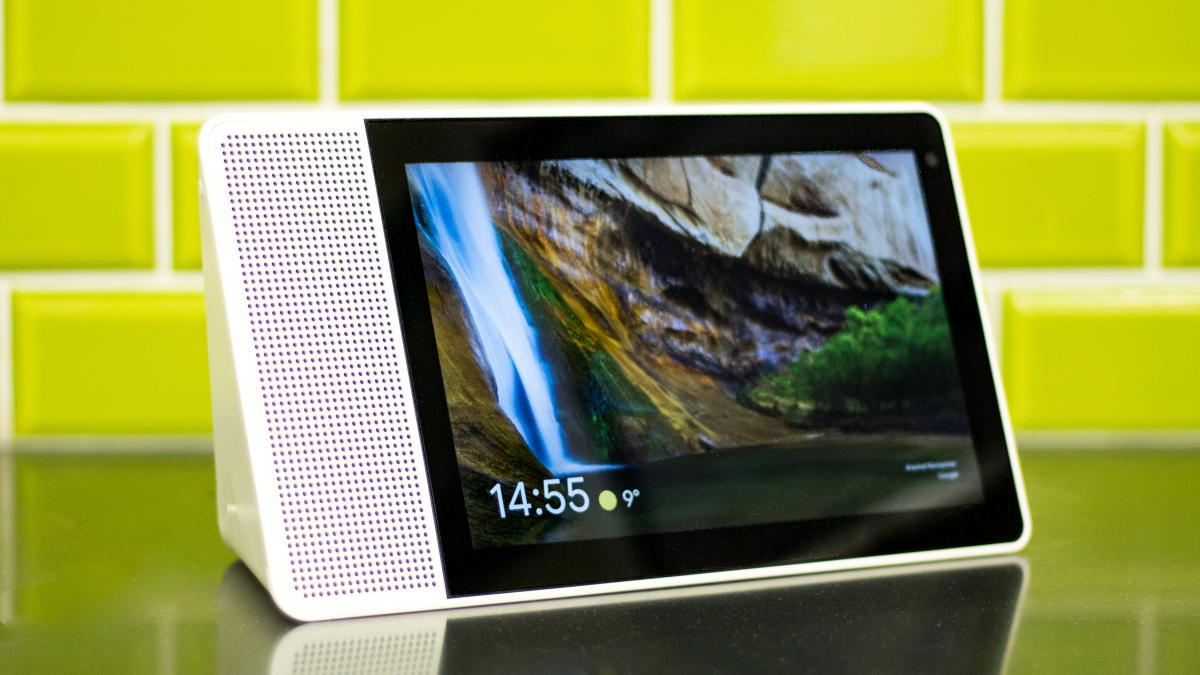 One exception to this, another feature borrowed from the Home Hub, is that the Smart Display uses Google Photos to show your own snaps when it’s not in use. From the Google Home smartphone app, you can manually select Google Photos albums to appear in the slideshow or, if you prefer, there’s a “Recent highlights” option that ‘auto-selects’ your best snaps for you. It’s also possible to have it focus on people you’ve tagged in photos and groups of people like “Family and friends”. In my opinion, this is one of the Home Hub and, by extension, the Smart Display’s best features.

Just like the Home Hub, however, video streaming on the Lenovo Smart Display is only via YouTube, unless you have your phone handy and are prepared to cast to it. Currently, BBC iPlayer, Now TV, BT Sport, ITV Hub and All 4 are among the supported apps, but you can’t cast from Netflix or Amazon Prime Video. That’s annoying if you want to carry on binge-watching a TV series, but you can at least stream BBC channels live as you cook dinner. 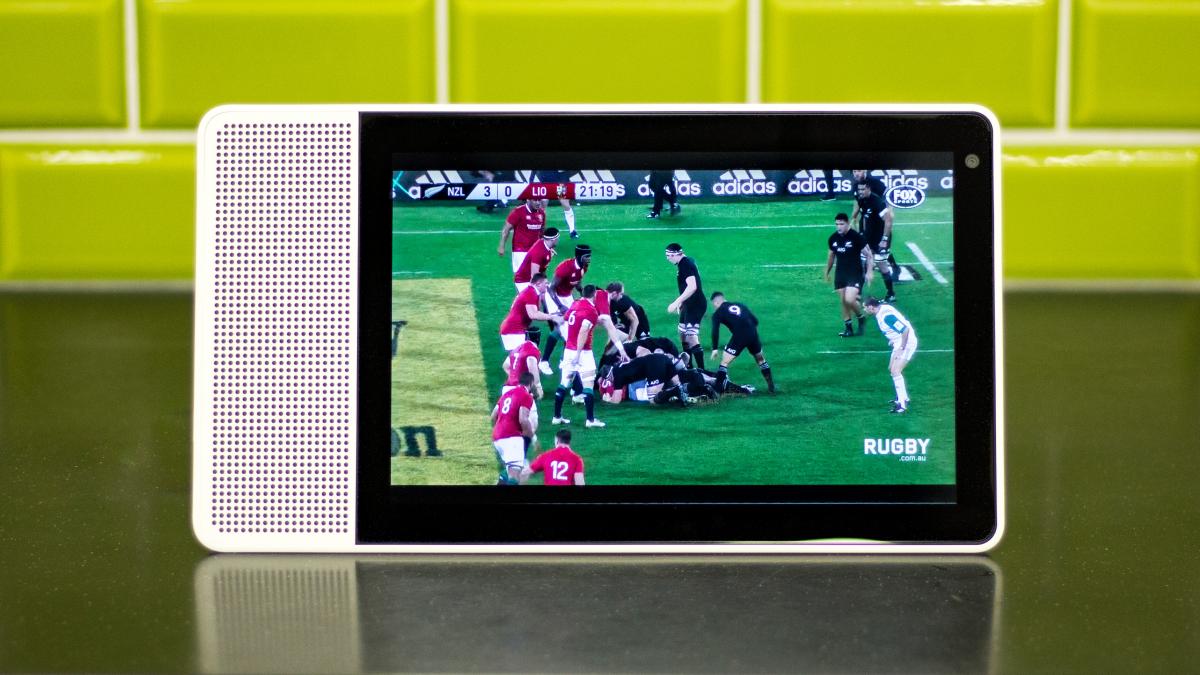 With two front-facing tweeters and a further full-range speaker tucked away in the stand, I expected to be blown away by the Smart Display’s sonic capabilities, at least compared to the diminutive Google Home Hub. Sadly, it failed to deliver on these expectations, delivering a sound with plenty of detail, but distinctly lacking in bass and body.

Moreover, rather than combining to create a stronger, more immersive sound, the tweeters sound detached from the full-range speaker, perhaps because they point in different directions. The Smart Display is still adequate for listening to the radio or the odd Spotify tracks but for a device that costs £230, I’d expect better.

The Smart Display is so similar to the Google Home Hub that it should be easy to recommend to anyone seeking a larger version of the Google-branded smart device.

However, at £230, the 10in Smart Display is considerably more expensive than the Home Hub, and despite having a brilliant display and a decent camera, it’s let down by disappointing sound quality.

The upshot is that if you want a smart display that doubles up as your main speaker for music playback, you should opt for the Echo Show. Otherwise, if you’re already invested in Google’s ecosystem, you’re probably better off saving some money and going with the Home Hub instead.

Don't miss a deal at Nike DE
Best offers at EE Mobile
Discounts, Sales and Deals at H&R Block
Save your money with Bodybuilding
Online-Shopping with Udemy
Best products at Sephora
Latest Posts