TP-Link is better known for its home-networking gear than the smart-home products it markets under its Kasa Smart brand, and it’s been building home security cameras for only the past couple of years. But the company has a handle on what consumers want: hassle-free installation, user-friendly features, and great value. All those virtues are embodied in the indoor/outdoor Kasa Spot Wire-free Camera System.

The system comes with a pair of cameras and a hub, plus cables, mounts and mounting hardware. The cameras are rated IP65, meaning that they’re dustproof and protected from water sprayed from a nozzle in any direction. The cameras have operating temperature range of -4 degrees Fahrenheit to 113 degrees F.

The cameras have a functional cube design—used indoors you can easily just set them on a table or shelf. Outdoors, you’ll want to secure them to an exterior wall with their mounts, but that is about all the installation they require. The cameras are powered by a rechargeable batteries, allowing you to place them pretty much wherever you want without having to worry about access to an electrical outlet. 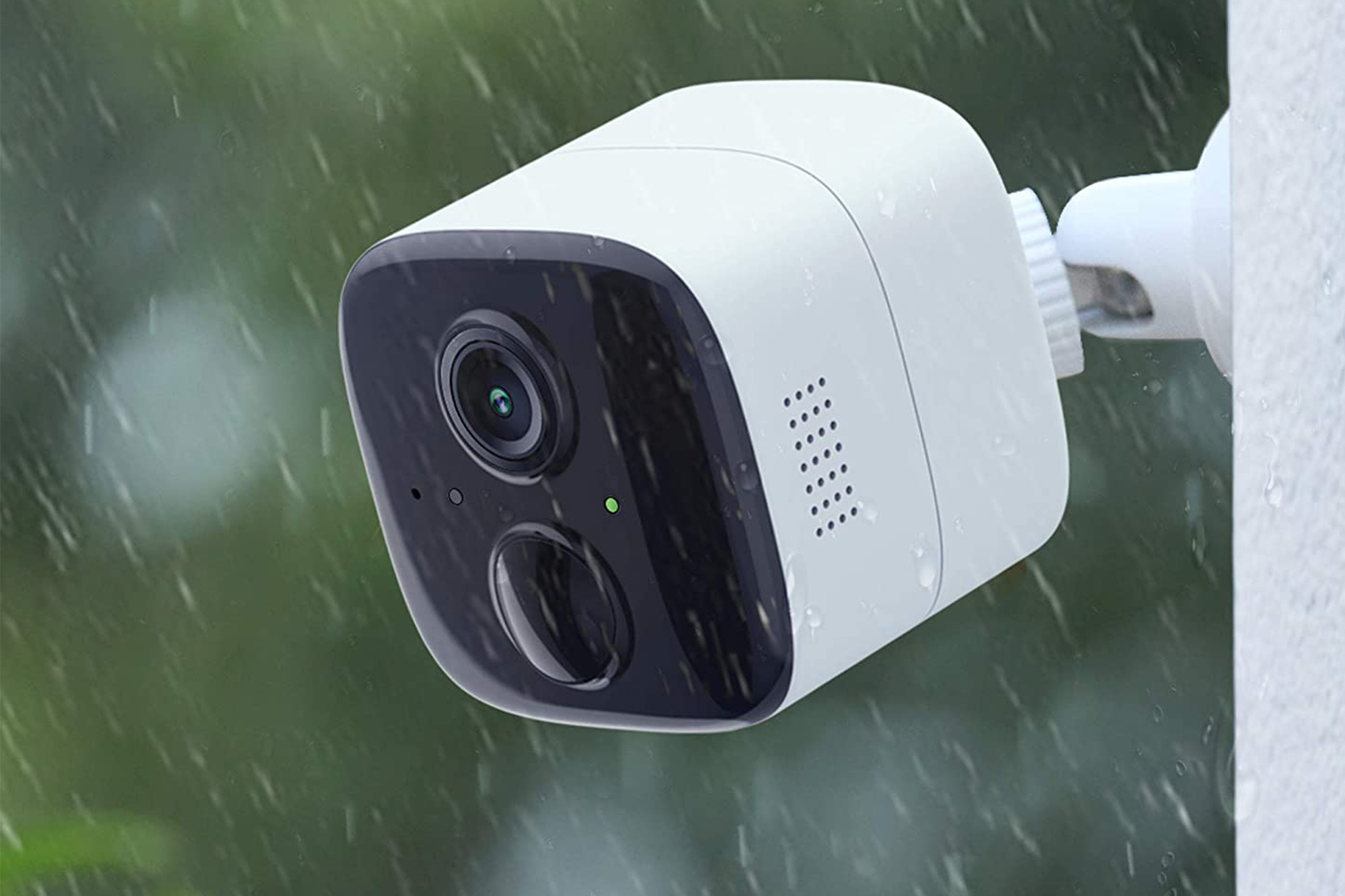 You get the typical array of features, including 1080p video capture, sound and motion notifications, and about night-vision range of about 25 feet. Two-way audio is available so you can communicate with expected and unexpected visitors.

The system’s hub acts as a bridge between the cameras and your wireless network, and it must remain plugged into AC power and wired to an ethernet port on your router. After you install the Kasa Smart app, you’ll add the hub by following a short series of prompts. Once the hub is setup, you’ll add each camera in turn and connect it wirelessly to the hub following a similar process. I got the system setup in just a few minutes with no issues whatsoever.

To ensure a solid connection, you’ll want to carry your camera to the desired mounting spot and watch the live stream for a bit, looking for latency or any other signs of a weak connection. Absent those red flags, you can install the mount using the supplied screws and in-app instructions, and then attach the camera to the mount. The mount’s screw-lock mechanism isn’t theft proof, but a thief won’t be able to remove the camera without considerable effort. 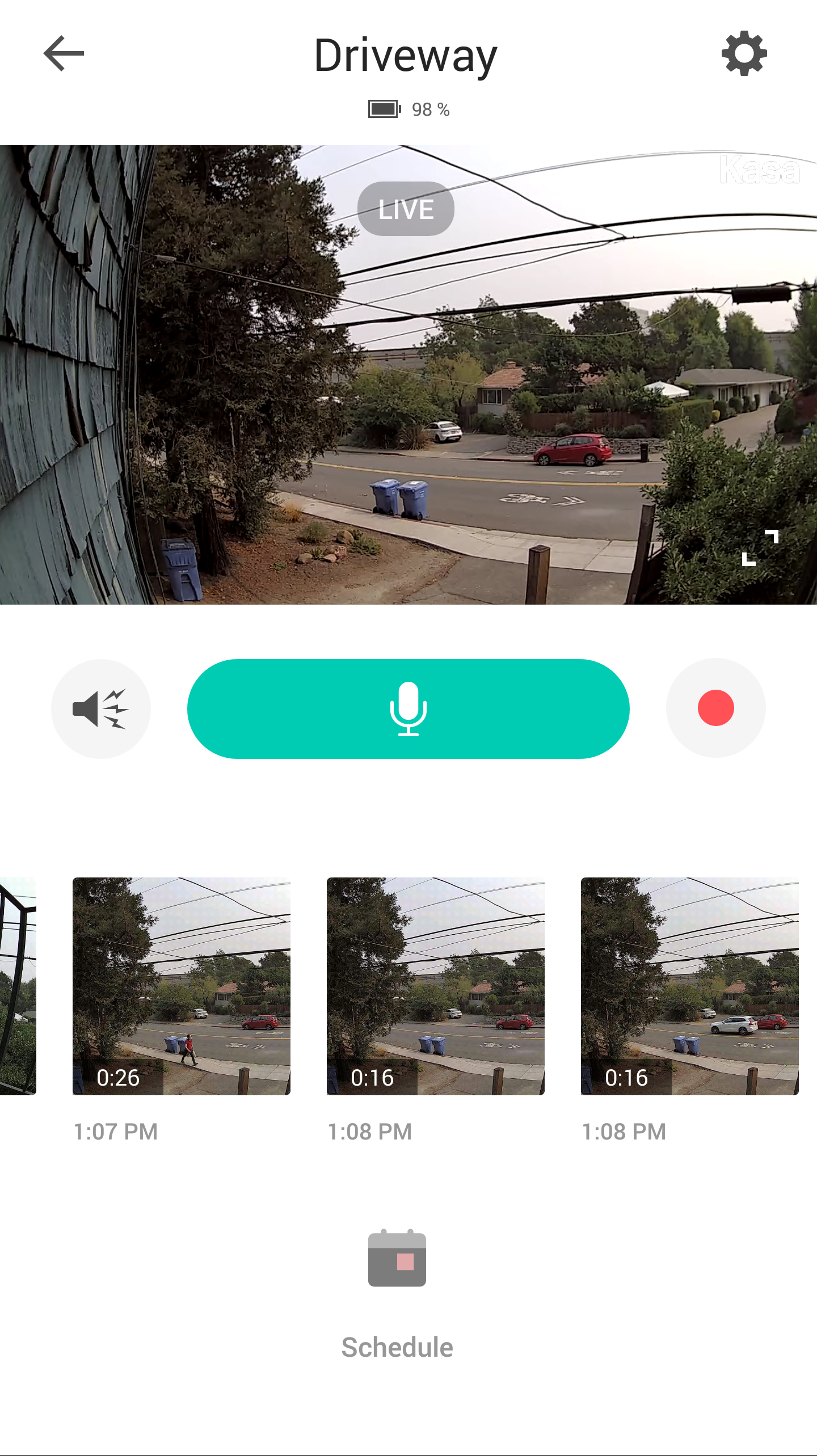 I installed one of the cameras to monitor my driveway, and its 130-degree field of view was more than adequate take it all in, along with much of the surrounding area. The image was crystal clear with minimal edge distortion. I was able to easily makes out license plates and the faces of drivers as they drove in and out of our lot.

While you’re viewing the live feed in the app, you have the option to record the stream, speak to visitors or intruders, or activate the camera’s not-terribly-intimidating alarm. In fact, if that last feature is an important consideration, I wouldn’t recommend that you buy this camera. The intermittent beeps it produces sound more like an alarm clock than a warning siren, and once the alarm has been triggered, there’s no way to turn it off—you just have to wait for it to finish.

The app displays event-triggered video clips below the video stream. With its default settings, the camera was recording—and alerting me to—every car that passed on my street. Fortunately, I was able to reduce those false alarms by establishing activity zones. Using a bounding box, I limited the detection area to just the entrance of the driveway, so the camera would only alert me to cars entering the property and ignore those just driving by. I also reduced the motion-detection sensitivity a tick and set the camera to only record motion that persists for more than three seconds.

The Kasa Smart app offers additional ways to customize alerts, such as scheduling windows when you want to receive them, or limiting notifications to no more than one every five minutes. It also offers privacy options for deactivating video and audio recording, and the ability to schedule when the camera turns on and off.

TP-Link provides free access to its Kasa Care cloud subscription service with purchase of the camera. You get access to 12 hours of video history, plus the ability to share and download video clips. The service also adds snapshots to your activity notifications. There are a pair of paid subscriptions that extend the video history to 30 days for one or up to 10 cameras respectively: the Plus plan costs $3 a month or $30 a year, and the Premium plan costs $10 a month or $100 a year.

Kasa Spot isn’t the most sophisticated security camera we’ve seen, but for most homeowners it offers more than enough security features to bring greater peace of mind. And its interoperability with the company’s line of Kasa Smart switches, outlets, plugs, and light bulbs is a plus. Those interested in diving deep into the smart home would be better served by a more robust ecosystem centered around a hub. But if you just want to dabble, TP-Link’s smart-home products operate via Wi-Fi and don’t require one (other than your router). And if all you really want is a security camera, this kit deserves your consideration.

The Kasa Spot Wire Free Camera System is a great foundational security package for most homeowners.

Don't miss a deal at Carphone Warehouse
Best offers at Adobe
Discounts, Sales and Deals at House of Fraser
Save your money with Newegg
Online-Shopping with H&R Block
Best products at TalkTalk Phone and Broadband
Latest Posts