The Jackery Explorer 1000 provides a great alternative to the grid thanks to its efficiency, battery capacity, value for money and possibility to connect to the SolarSaga solar panel. You get what you paid for and in this case, there’s a lot being offered.

The rechargeable battery pack has evolved from its humble beginning. Long used to give a quick charge on-the-go to a dead cellphone, it has morphed into something that can replace a small AC generator, thanks to the significant improvements in battery technologies over the last decade.

Be it in a power outage or living off-grid, having a reliable source of power can be a life savior. For the modern nomad, something lightweight with plenty of input and output options as well as storing a lot of energy checks most boxes. On the other hand, appliances compatibility and increased efficiency requires generators to produce a so-called pure sine-wave, where the output voltage behaves almost identically if not better than that produced by power stations.

We’re looking at one of the challenger brands in this bustling line of business. Jackery, founded by an ex-Apple battery engineer, is one of the better known brands, having launched the first Lithium portable power station for outdoor usage in 2015. 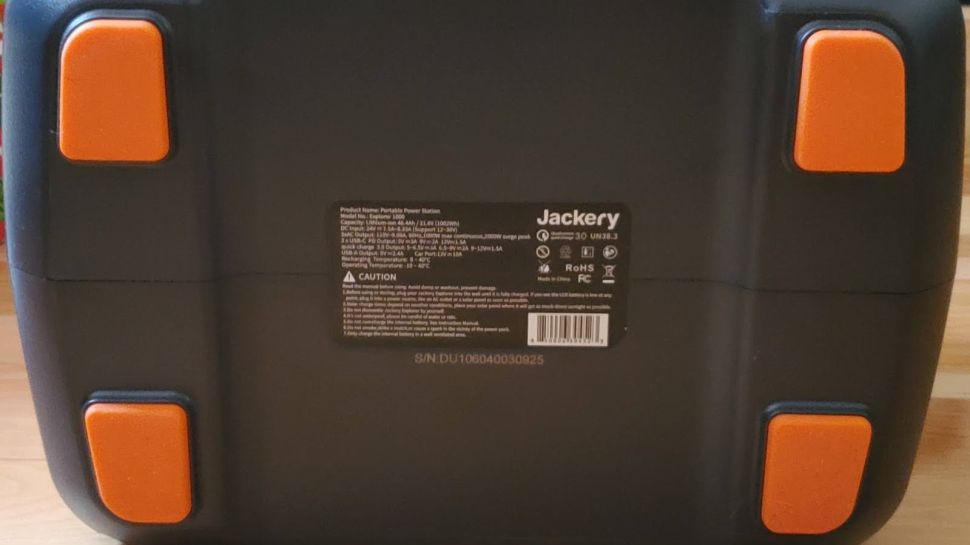 The Jackery Explorer series looks like an oversized but sturdy lunch box, with its round corners and matte plastic finish. The orange and black case has rubber pads on the bottom to prevent slippage as it can be heavy, reaching 10 kg for the 1000W version.

Each function of the power station is compartmentalized on the front panel, with distinction made for inputs, AC/DC outputs and status display. A small backlit LCD shows information such as the percentage of charge remaining as well as input/output power. Functions are conveniently enabled through push buttons to save energy when not in use. 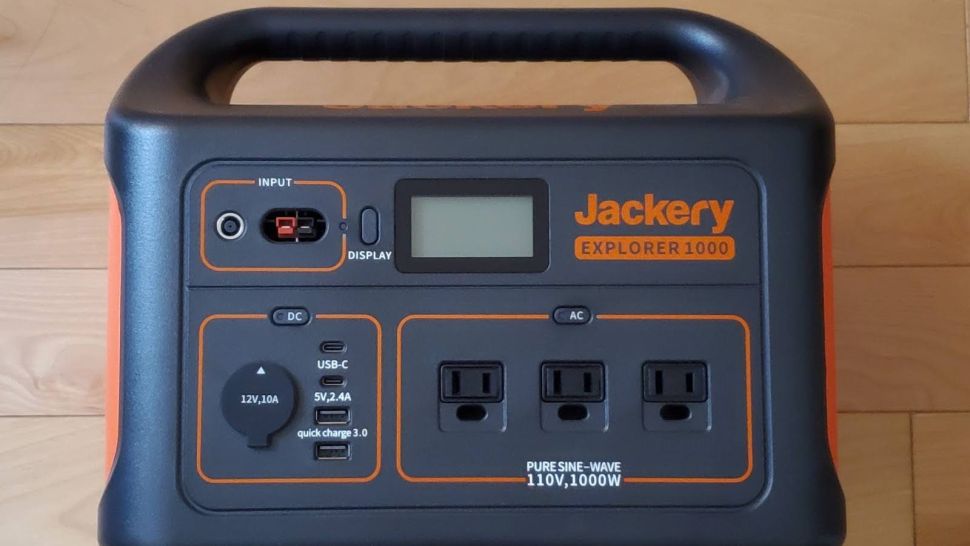 For the input, the user has a choice of charging either through the supplied AC adapter, the car charger cable or an Anderson input when using solar power. DC outputs include four USB connectors and a 12V DC car outlet for the Explorer 1000. USB ports allow quick-charging of connected devices at a maximum of 18W. AC outputs take the form of North-American 110V sockets, with a combined maximum sustainable power of 1000W allowed. A 5W flashlight with SOS capability is also available in high-power models. 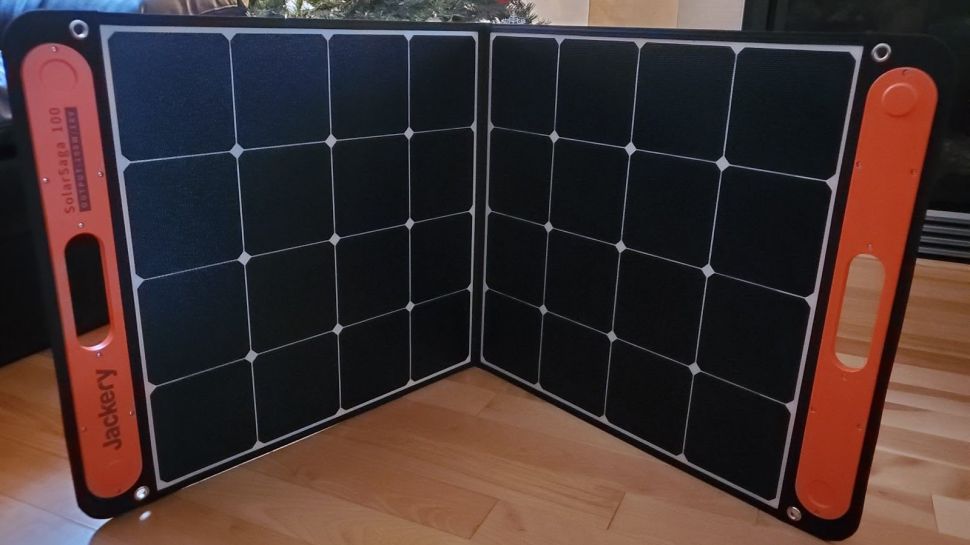 Solar panels bundled with the Jackery Solar Generator provide the ultimate off-the-grid experience with no strings attached. The panel, while not waterproof, is well built and is protected by a thick fabric which also acts as a transport bag. For this purpose, two integrated handles on either side of the array allows for an easy carry while the integrated pouch hides the power distribution module and helps keep wires tidy.

Solar modules can either be used as stand-alone panels, where two built-in USB connectors allow charging of devices up-to 15W for the type-C and 12W for the type-A, or connected to the Explorer power station and used as a MPPT (Maximum power point tracking) system. When used in tandem, two solar units will provide as much input power as the supplied AC power brick. 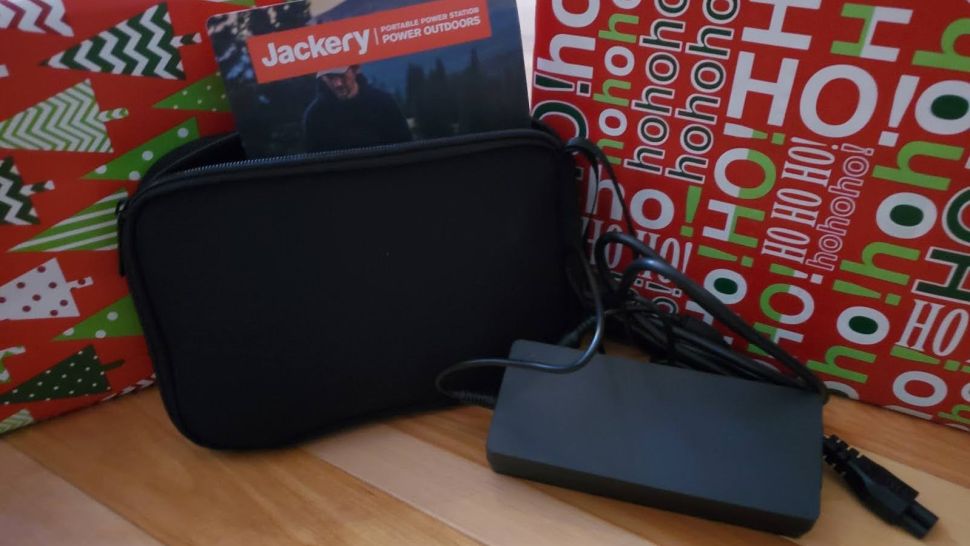 The Jackery Explorer comes with a small accessory bag, a 180W AC power brick and a car adapter for charging while the Solar Saga 100 is supplied only with a 3-feet power cable.

The most common use of the Jackery will be as an AC generator. Plugged-in devices start to operate with the press of the AC button. For the Explorer 1000, the three available sockets will share the 1000W power headroom. Using the DC section is also straight forward. Plug the device cable and press the DC push button. Both generator sections, AC and DC, can work at the same time and maximize the usefulness of the Jackery power station but again, the 1000W limit will apply. In case of excess power consumption, the generator will shut-off.

Supplying 1kW of power is no easy feat. The Explorer 1000 model is cooled thanks to its built-in fan that starts working whenever there is a moderate AC load. Air vents located on both sides of the case help further cool the internal battery and inverter circuitry. As such, it is recommended to have some clearance around the power station in case of extended use to help the airflow.

Jackery does a good job at illustrating various use-cases of the generator. Corresponding runtimes obtained from the integrated 1000WHr batteries are also provided. For example, a 60W TV will last 14 hours on a full charge. This takes into account the efficiency of the converter circuitry which, in this example, is 84%. The efficiency increases when powering DC devices only since no sine-wave inverter is needed.

The LCD comes in handy by showing how much energy is left in the battery while also providing information about powered devices. There is a lag between the displayed and delivered power of about 15 seconds. Other quirks of the Jackery include a relatively long charge time of seven hours and the non-intuitive power switch between the inputs, favoring the AC power brick instead of the solar panel.

The two solar panels provided with the Jackery Solar Generator can either be used independently or in parallel. At 23% efficiency, a single 100W unit can charge multiple USB devices while also being connected to the generator. Adding a second panel will require a special Y-adapter plugged into the Anderson port of the generator. The combined solar panels provide more charging power than the AC power brick, resulting in a faster charge time.

The market for portable battery-based generators have exploded recently in part due to the pandemic. Working from home has allowed people to consider a nomad life while the need to have a reliable power source on-the-go has persisted.

The EF ECOFLOW Portable Power Station Delta is in the same class as the Jackery Explorer 1000 but offers better charging time. On the other hand, the efficiency of the system isn’t on par with the Explorer at less than 80%. It is also heavier while faster charging puts more strain on the batteries, hence decreasing their lifetime.

The MAXOAK BLUETTI EB240 is also a challenger to the Explorer 1000. It offers a higher battery capacity while boosting the same power rating for the inverter. The price of the EB240 is almost twice that of the Explorer 1000 while also being much bigger and heavier than the latter.

Finally, there are many Jackery look-alike on Amazon but none come close to the build quality and support offered by the company. For instance, the SUNGZU Portable Power Station 1000W has similar performance compared to the Explorer 1000 but suffers from poor customer feedback on Amazon. The Jackery Explorer 1000 is an Amazon bestseller in its category and that’s not for nothing.

With its excellent build quality, converter efficiency and input/output power options, the Explorer 1000 is a good product at a reasonable price. Together with the SolarSaga solar panel, the generator becomes an off-the-grid power supply outperforming most of the competition in terms of efficiency. The Explorer 1000 isn’t perfect and minor drawbacks do exist. The quirky power measurement on the status display and the switch-over of the input supply to favor the AC power brick instead of solar are only a few. It will remain a judicious investment and will pay itself in the long-run.

Don't miss a deal at EBay DE
Best offers at Sephora
Discounts, Sales and Deals at Argos
Save your money with Newegg
Online-Shopping with Marks and Spencer
Best products at Go Daddy
Latest Posts