If you’re in the market for an action camera, you’ve never been more spoilt for choice. Whether you’re looking for high frame rates, silky smooth stabilisation, intuitive apps, or even 360-degree video capture, you’ll find something that ticks the right boxes. What if you’ve only got the space in your bag, or your budget, for one? The modular Insta360 One R might be the answer.

It looks like a regular GoPro clone but the One R is actually many cameras in one, comprising three distinct modules: the core, camera, and battery. You have the ability to mix and match these modules depending on what your current shooting situation calls for. 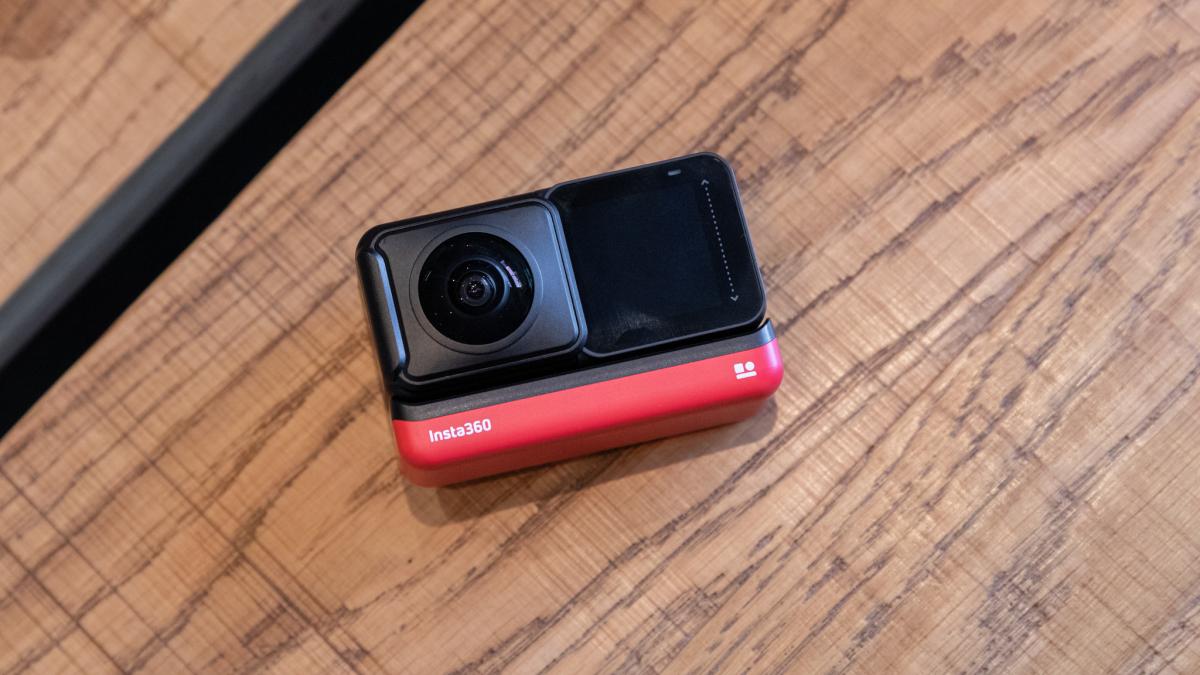 The core module houses the brains of the operation as well as a 1.3in colour touchscreen on one side, a power and shutter button on the top and a USB Type-C port and microSD card slot, covered by a latched flap.

Camera modules can be attached to this either forwards or backwards, giving you the option to use the display normally or as a selfie screen for vlogging. Initially, there will be three camera modules to choose from:

Attach the 4K camera module and you have a traditional action cam, just like a GoPro. It can shoot 4K video at 30fps or 60fps and at up to 200fps in Full HD or 100fps in 2.7K. The 360 module mirrors most of the specifications found on Insta360’s flagship 360 cam – the Insta360 One X – and goes toe-to-toe with the GoPro Max. This allows you to record 360-footage at up to 5.7k at 30fps, and you can choose to crop and reframe the footage after you’ve captured it.

The 1in module brings something unique to the table as it makes the One R the first waterproof action camera to feature a sensor of this size. The 1in sensor records video at up to 5.3k at 30fps and the larger sensor size should provide it with higher quality results than the regular 4K module when filming in bad light. Both the 4K and 1in modules both also utilise Insta360’s “FlowState” electronic stabilisation tech, which is similar in function and effectiveness to the HyperSmooth stabilisation found on the last two generations of GoPro action cameras. 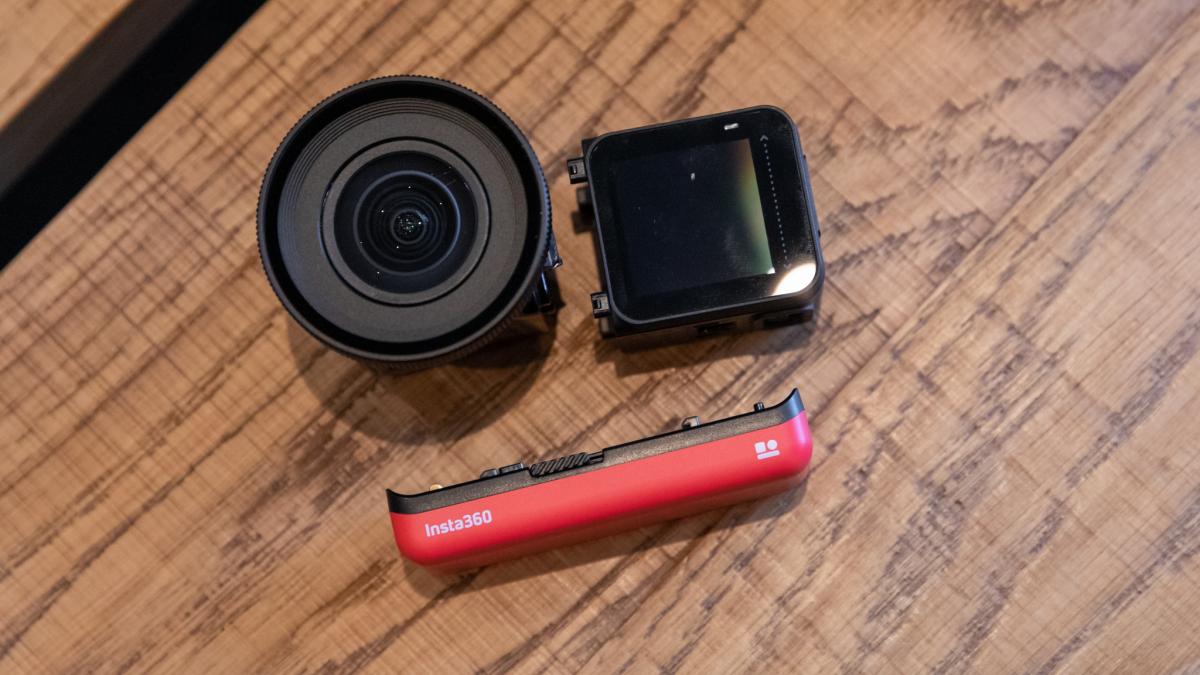 The camera setup is rounded out with a pair of battery module options (external charging is also supported via the Core module’s USB Type-C port). The larger of the battery options has pop-out mounting legs like on GoPro’s Hero 8 and Max. The smaller battery allows for the R to fit into a cage that features a traditional GoPro style mounting bracket. These mounting options mean you should be able to use the One R with any of the GoPro-compatible attachments and harnesses that are currently available.

The camera is lightweight, but everything feels solidly built. You connect the different modules by lining up matching sets of pins and interconnecting tabs, then everything clicks together rather satisfyingly. With the smaller battery pack attached it feels a little shorter than your standard GoPro camera but any size advantage is lost once you fit it into the cage or attach the larger battery. 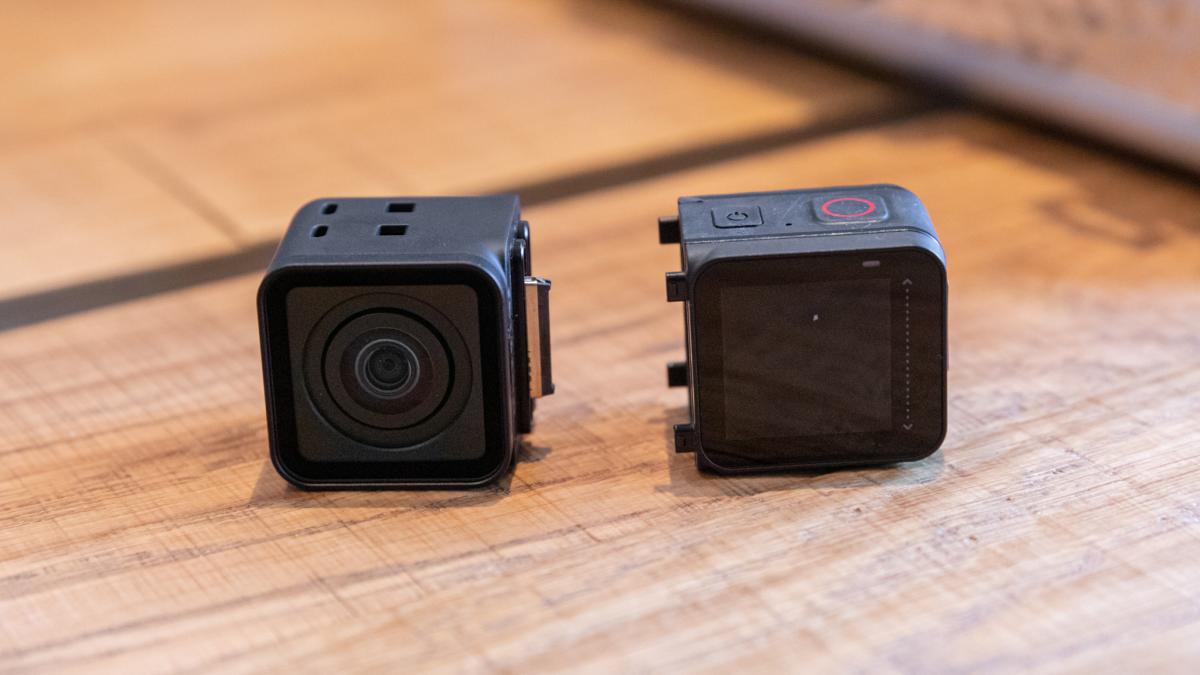 For audio, the One R includes 3 microphones but for those looking to up the quality of their recordings the USB port also supports USB Type-C to 3.5mm jack adapters for external microphone options. If wires aren’t really your thing, Insta360 told us you can also pair the One R with a microphone-equipped Bluetooth headset.

To make it to the top of the action cam heap, brands need to take their software as seriously as their hardware, doubly so for 360 cameras, and so Insta360 has improved here, too. The One R can be controlled via Bluetooth remote, voice command or via a mobile app and, for 360 video, you can initiate subject tracking by pointing the camera at your subject and saying “mark that”, thus automating the editing process somewhat.

The One R also provides in-camera stitching for all of your 360 footage, so you don’t have to mess about combining the footage yourself in the edit and it generates full 360 previews and playback on the camera in a first for a 360-degree action camera. 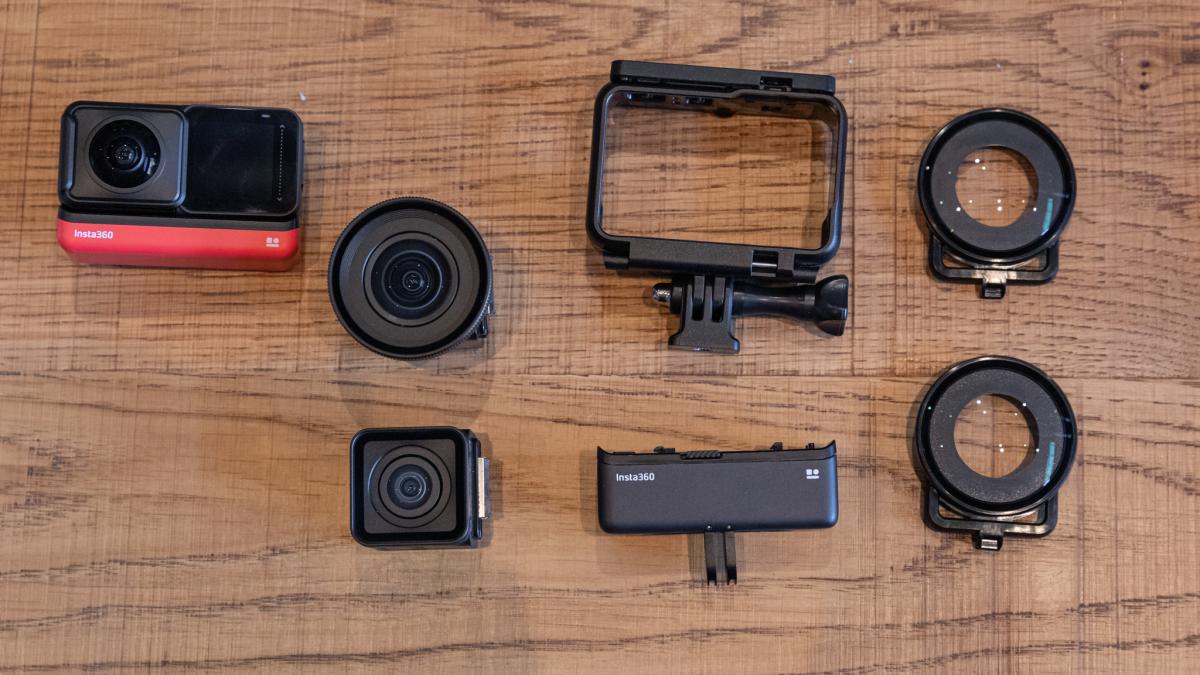 Once you’re paired up with the Insta360 app, your recorded footage can be offloaded to your phone for playback, editing and sharing. One neat touch here is that while editing in the app you’re working with low-resolution proxy files, which saves time on file transfer between the camera and the phone, allowing you to get to work quicker. You can opt to transfer and export the full resolution file from the camera to your phone once you’re happy with your edit.

Of course, there are other bells and whistles here as well, including – inevitably – a sprinkling of AI. This helps the camera to identify people, pets, objects and scenes in your footage and provides suggestions for quick edits, automatic time-shifts, colour correction and tracking for 360 clips. If you want to get in-depth with your edit you can, of course, ignore the AI suggestions and go fully manual.

The Insta360 One R appears to be an innovative new take on the classic action cam design. We’re used to brands pumping out regular annual releases with incremental tech spec bumps. Comparatively, though, the Insta360 One R is something new – something a little more exciting.

Time will tell whether Insta360 further fleshes out the One R’s ecosystem with additional modules and add-ons but, at launch, it presents a very attractive creative option even with only the option to switch between three different cameras.

The real attraction with the Insta360 One R, however, is the price. After launch, it will be available as a single 4K lens kit for $300 and with the 4K and 360 lenses together in one box for $430. Compare that with GoPro’s flagship action and 360 cameras, which if bought together, would cost about double that and the appeal is obvious.

The 1” sensor kit will be available shortly after with a list price of $550 and all lens modules will also be available to buy separately, although no price as yet been announced for these.

Keep an eye out for the full review, which we’ll be posting here shortly.

0 0 0
Previous ArticleGalaxy S11 codename 'confirmed' by Samsung, and it hints at a new feature
Next ArticleSamsung’s Galaxy Home Mini is finally landing in early 2020
Comments (0)

Don't miss a deal at House of Fraser
Best offers at Argos
Discounts, Sales and Deals at TalkTalk Phone and Broadband
Save your money with Mobiles
Online-Shopping with H&R Block
Best products at Boohoo
Latest Posts